In less ingenious hands, Super Mario Maker could have been a short-lived gimmick of a game; a simple level design tool with delusions of grandeur. In Nintendo’s hands, it’s become something else – not merely a DIY game maker, but a celebration of all things Mario in which building courses is almost as much fun as playing through them. Whether you’re a budding games designer or someone looking for a steady stream of old-school 2D platform action, Super Mario Maker has something in it for you.

Even if you just want to play for a few minutes here or there, you’re covered. The game’s Ten Mario Challenge mode gives you a string of eight course challenges and ten lives to complete each one with, with the courses changing from run to run but scaling in difficulty as you make your way from course to course and challenge to challenge. Some are quickfire levels with an almost Wario Ware feel, where a quick trick, a cool combination of mechanics or a puzzle is the whole point of playing. Others are pure platforming challenges or tests of your ability to think and act fast. 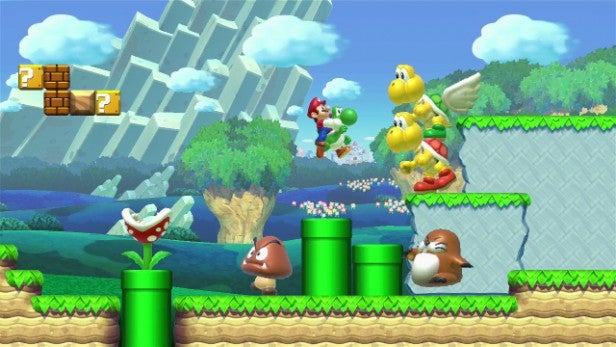 Either way, it’s clear that the designers are having fun, using classic Mario enemies, mechanisms or power-ups in ways that might subvert your expectations or surprise you. Cannons may shoot coins or enemies instead of bullets. Goombas or Koopa Turtles become supersized, winged or stacked. Pipes spawn Piranha plants, but also unexpected enemies. What’s more, each course completed gets added to the set of sample courses you can use as a basis for your own remixes.

There’s more goodness in the Course World, Super Mario Maker’s hub for user-created content. You can check out featured courses, up and coming courses or follow course creators, and simply try out courses you fancy one by one, following a trail of recommendations on the basis of ‘if you like this, you’ll like these.’ Better still, there’s a 100 Mario Challenge where you’re given 100 lives to clear a set number of user-created courses, which the game selects for you. Here there are more rewards to be used in your own handiwork, ensuring that it all ties in together. 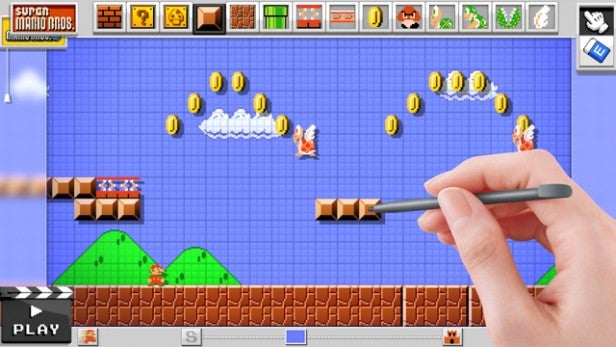 The real heart of the game, though, is Create a Course mode. Other games have included construction sets, with LittleBigPlanet being the prime example, but Super Mario Maker does an amazing job of making the creative process accessible and – more importantly – fun. Even the basic tutorial is entertaining, and the use of music as you draw and drag blocks onto the screen is plain inspired. Where LittleBigPlanet made creativity feel more physical and interactive, Mario Maker makes it as intuitive and playful.

It helps, of course, that the Wii U Pad is so perfect for the task. The screen gives you a view of a section of the course, and you can scroll left or right, up or down just by moving Mario with the left stick. Meanwhile, simply tapping a block, pipe, enemy or power up selects it, and once selected it’s tapped or drawn onto the screen. All levels are horizontal in nature, but there’s a reasonable amount of scope to work upwards, and you can connect different sections using pipes to create, say, an underground chamber or underwater area. Later on, you can also control the scrolling speed to make those ever-tricky run or die courses. 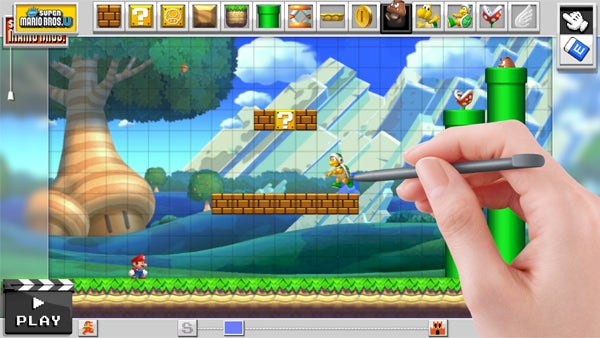 The tools are sophisticated without ever becoming daunting. Tappable handles allow you to extend a pipe or raise a cannon, rotate it or switch direction. Other buttons change the way a moving platform moves. Many elements hide a secondary option, where dragging the element out and shaking it with the stylus will reveal another form. Elements can also be lassoed and moved around as one. Best of all, items can be combined, allowing you to change the natural of an element using what amounts to Mario World logic. Want to make something bigger? Just drag a mushroom over it. Fancy flying goombas? Just attach some wings. Dragging a power up over a block will hide it in there, ready for a quick head-butt or ground pound to reveal, but you can do the same with other items, including enemies.

At first, Super Mario Maker limits your options, but the more you play – and more specifically, the more often – the more course types and items you’ll unlock. Boss characters and more sophisticated enemies, traps and mechanisms all come into play, including favourites like the helicopter helmet, bouncy sound blocks and Bowser and Baby Bowser. The sound blocks can even be converted to musical notes, allowing you to create your own interactive compositions for Mario to run and jump along. 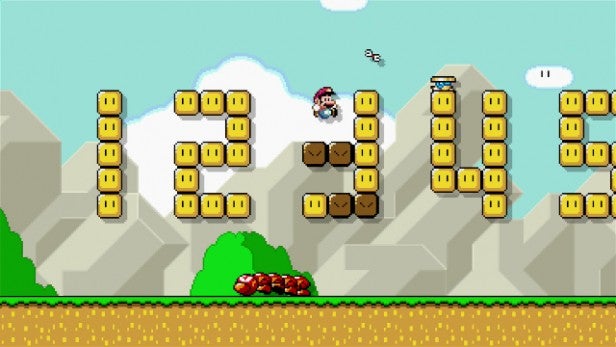 What’s more, you’ll find a choice of art styles, which you can flick instantly between using a menu on the left-hand side. It doesn’t matter whether you want a retro Super Mario 3 or Super Mario World look or the modern 3D style and more dynamic lighting of New Super Mario Bros. U; it’s all up for grabs. In fact, you don’t even have to play as Mario. A new mystery mushroom transforms our hero into an enemy, a piece of course furniture or even another Nintendo hero altogether. Finding out how is all part of the fun.

While it’s very easy to put a course together, it’s an awful lot harder to create something that others will enjoy. Super Mario Maker has tools to help, like a view that shows you where people move Mario and how they fail, but in the end there’s no substitute for inspiration, refinement and a lot of editing work. Some of us will succeed while others might struggle, but it’s clear from the user-created content in our pre-release version that you can pull off some amazing feats if you put in the hours. 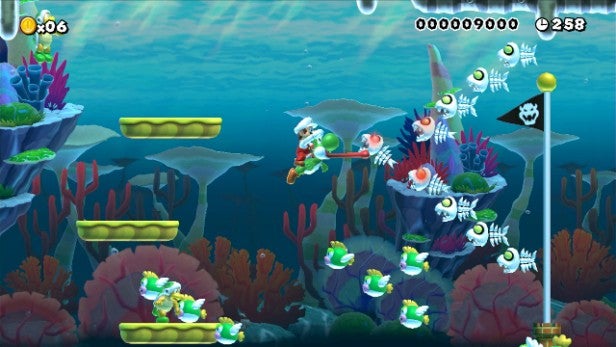 Is Super Mario Maker a classic Mario? Maybe not. By it’s nature it’s too bitty and unstructured, without the flow of themes and ideas from course to course and world to world that characterises Super Mario Bros. 3, Super Mario World or the New Super Mario Bros. games. It’s a game best enjoyed in regular fifteen or twenty minute bursts with the odd hour spent here or there building something, not a game you’ll find yourself obsessed with for day after day. If anything, playing it and creating your own courses just increases your understanding of how much work, imagination and refinement goes into making these games so utterly great. 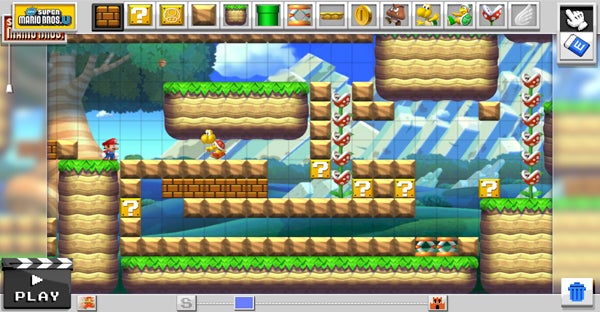 Yet this is also more than just a stopgap: the Mario game where you make your own fun. It feels like a celebration – the ultimate Mario party – where you’re given the keys to the Mushroom Kingdom and license to run riot. Only time will tell whether the world at large will take to Super Mario Maker and turn Course World into an endless stream of 2D platform fun. Nintendo seems to be working on curation and discovery, but how this plays out when the game launches remains to be seen. Yet between the challenge modes, the course creator and the bundled, inspirational art book, you can’t complain that you’re not getting bang for buck. Love Mario? Feeling creative? Super Mario Maker is for you.

Verdict
You might come for the quickfire fun of the Ten Mario Challenge, but you’ll stay for the pleasures of creating and the unpredictable delights of the Course World. Nintendo hasn’t just produced a Mario construction kit, but a celebration of all things Mario where you’re encouraged to get stuck in. Super Mario Maker is the real Mario Party.