Exclusive to Nintendo Wii U
How things have changed since Mario & Sonic’s first Olympics outing in 2008. Back then we were just coming into the Wii’s golden era, where motion controls were still shiny and new. This resulted in a game so bewildering and physically exhausting, that by the time you’d pumped your arms furiously through the 100 metres, you barely had the energy to work out which sequence of motions might actually launch a javelin.

Mario and Sonic at the London 2012 Olympic Games spiced things up with some weird event choices, and the even stranger Mario and Sonic-themed dream events, but it arrived just as the Wii was falling out of favour and motion controls were growing passé.

Now Mario & Sonic at the 2016 Rio Olympic Games arrives with the motion controls dumped and any Wii U-specific features sidelined. Yet, strangely enough, it’s the strongest and most innovative game the series has ever produced – and that includes the two Winter efforts. 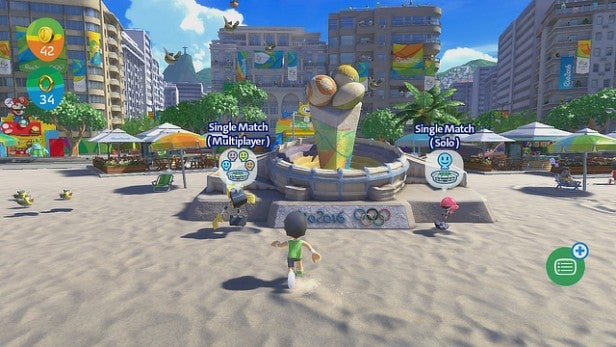 There are echoes of Splatoon in the way it’s put together, with a hub based around a Rio beach from which you can access single events, Olympic competitions, Mii-Verse and Customisation features – plus a whole lot more.

It’s a genial place, where you can meet Miis of various nationalities, discover fun facts about their countries and collect their national flags – a fitting side-objective for a game that, whatever the title, puts Nintendo’s avatars centre stage.

You see, while you can take the usual favourites from Mario and Sonic’s crew through single events, either solo or with up to four players, there’s none of the usual taking your team through the Olympics stuff.

Instead, the real meat of Rio 2016 lies in taking your Mii through several levels of Olympic disciplines, going for gold in each one. Although you’re not actually playing live against other players, the game uses their Miis, complete with any customisations, to convince you that you are.

Take home medals and you’ll win rings and coins, new hats and clothing, or the opportunity to challenge and unlock new Sega and Nintendo stars. Fail, and you can just pick another discipline to tackle next, safe in the knowledge that you’ll be able to have another go later – not in four years’ time. 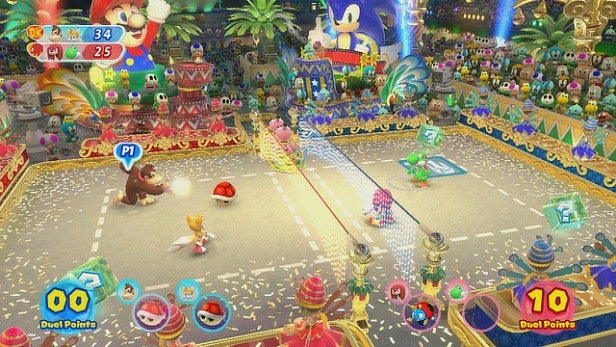 The events fall broadly into two types, with the team sports – Soccer, Rugby Sevens and Beach Volleyball – divided off from the athletics, swimming, gymnastics and archery disciplines.

The former group play like simplified, dumbed-down versions of an arcade sports sim; although they’re enjoyable and accessible, they’re hampered by some ropey team AI. The latter generally stick to the kind of button-mashing template we’ve known and loved since Track and Field – although there’s usually only the one button to mash along, with a few to prod sharply when indicated.

The big surprise is that there are no real stinkers. With motion controls gone, we’re back in the land of skill and timing, with some events such as the BMX biking or swimming even requiring some level of strategy – if only in terms of conserving energy for the full race, rather than going crazy in the first few minutes.

Alongside stalwarts such as the 100m sprint, 4 x 100m relay, javelin, triple jump and swimming, you’ll discover a few more eccentric choices, including BMX racing with stunts and rail-grinds, archery, rhythmic gymnastics and equestrian, with the latter asking you to pull off tricks when your ride over blue spots and jump when – or if – you hit the red spots on the course. 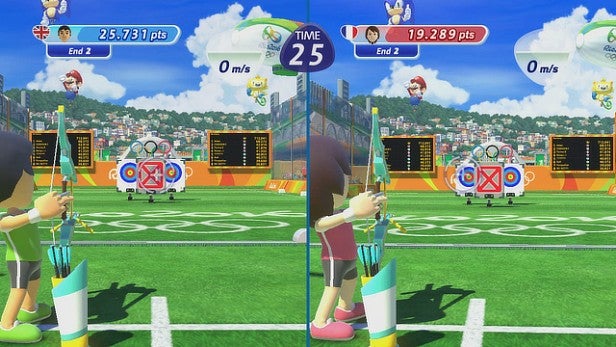 At times you sense a missed opportunity. Archery is a target-shooting game that would feel much better with Wii remote motion controls than with a slow-moving reticule, while rhythmic gymnastics is a little too basic in its rhythm action gameplay.

Yet even the weakest events can be great fun, if only because nothing makes your family laugh harder than the sight of Bowser – or worse, your poor Mii – pulling off a sequence of graceful somersaults, flips and baton-tossing gestures in time to classical excerpts (especially if your Mii is clad in a skin-tight pink swimming costume).

The team events also come with Duel modes, where ideas culled from Sonic and Mario titles invade the game. In Duel Soccer, for example, you notch up points by firing off plasma shots to stun opponents, then bank them en masse when you score a goal.

Duel Volleyball, meanwhile, has you racing to grab power-ups in between passes and spikes. These liven up the action and help stop the weakest of the team sports – Rugby Sevens – turning into a slow-moving series of scrums and tackles won usually by a single try or field goal. 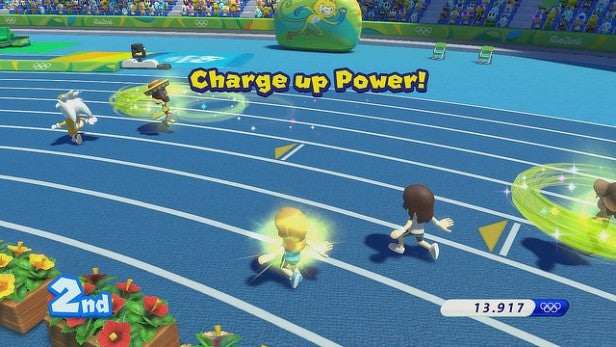 Keep battling through and you’ll unlock additional modes, including a Ghost Mode where you can take on the recorded performances of the leading players – or similarly-ranked opponents, if you prefer – and Heroes Showdown.

Heroes Showdown is probably the best way to play the game with Nintendo’s stars, pitting Team Sonic against Team Mario in a knockout battle through a series of random disciplines, with the champion(s) of the losing team eliminated. The use of cards to suspend or revive players can be annoying, but it’s fun played solo and even better played mano vs mano.

Fun really is the driving force here. This isn’t a game of brilliant mechanics or serious depth, but it’s effortlessly charming. Even if the main Olympic mode wasn’t so curiously addictive, the chance to see Bowser Jnr beating Tails in a BMX race, or Princess Peach knocking out Shadow in the boxing ring, would make it irresistible.

It helps that the graphics have a beautiful CGI movie quality, with detailed textures and fantastic lighting, making this one of the best-looking games on Wii U.

I won’t tell you that Sonic & Mario at the 2016 Rio Olympic games is a masterpiece, because it isn’t. It’s every bit as shallow and silly as previous titles, taking on a broad range of disciplines without ever really mastering any. Yet, if you’re looking for a fun game to play with the family then it’s one of the most enjoyable I’ve played this year – and as a solo player, it’s surprisingly good to boot.

There’s a chance you’ll have forgotten it by the time the real games have ended, but when Olympic fever hits, you can guarantee that a lot of mums, dads and kids will have picked up this little beauty – and they won’t regret it if they do.