Exclusive to Nintendo 3DS
Just when you thought Nintendo’s Mario RPGs couldn’t get any more peculiar, along comes Mario and Luigi: Paper Jam Bros. Here, the team at AlphaDream follow up Mario and Luigi: Bowser’s Inside Story (a game which itself featured the brothers fighting through the guts of their arch-enemy) and the utterly surreal Dream Team with a crossover title, bringing the worlds of regular Mario and the flat-as-a-pancake 2D Paper Mario together for the first time.

The result might not be Mario and Luigi’s finest hour, but it’s another smart, witty, rather amiable action RPG.

Needless to say, Mario RPGs never work like normal RPGs, and the Mario and Luigi series is particularly unusual. You control the two brothers simultaneously as they wander around the mushroom kingdom, completing quests, solving puzzles and battling Bowser’s minions from a zoomed-out vaguely isometric view. Both brothers move with the one analogue stick but respond to presses of the A or B button, which controls virtually everything they do. Want Mario to jump? Press A. Luigi? B. Both? A and B at the same time. 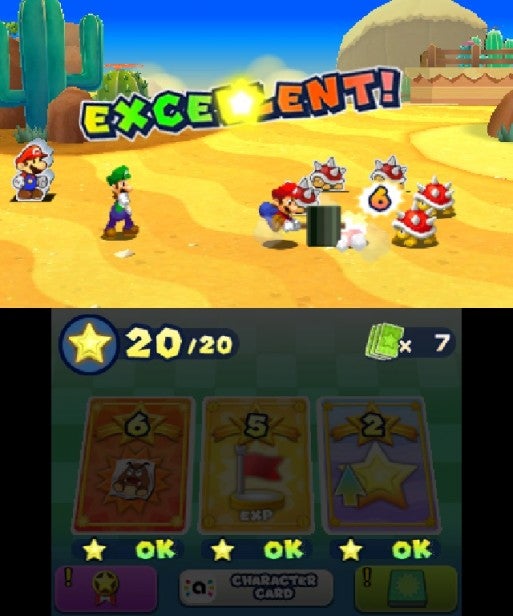 When the bros run into trouble the game switches to a turn-based combat mode. Here you pick attacks from a revolving selection above each Mario brother’s head, picking between standard jump or hammer attacks plus a growing selection of super-charged Bros. abilities that see the bros working together to dish out damage. Whatever you’re doing, though, there’s a real-time element to it, whether that’s jumping to dodge incoming blows or tapping A as Mario’s about to land with a stomp, giving him a second chance to hand out bonus hurt.

In many ways the hooks are the same as in a conventional RPG. You fight, you level up Mario and Luigi, develop new Bros abilities and upgrade your kit, though with only boots, overalls and hammers to take care of, the inventory screen’s not quite as complex as the one you’d find in, say, Divinity: Original Sin. However, the Mario and Luigi series has always played as much for laughs as thrills, with strange, meandering storylines, cheap gags and fourth-wall breaking quips a speciality. Paper Jam doesn’t throw away what passes as the series’ rulebook, and many of its pleasures are the same. 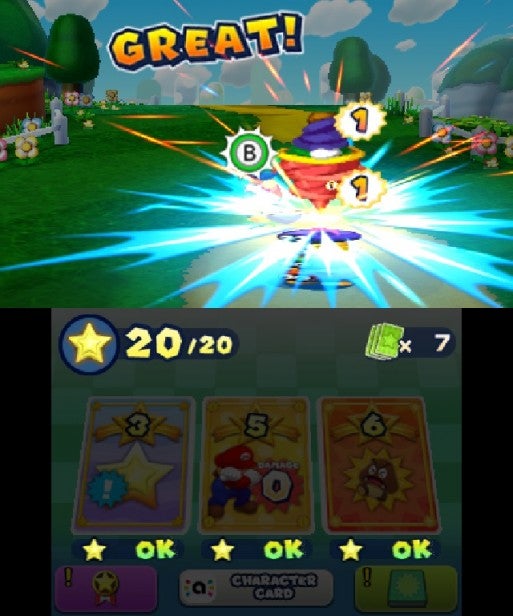 Here, of course, the twist is the intrusion of the Paper Mario universe into the regular Mario world, as Luigi and the toads discover a strange book that spouts forth paper Toads, paper Goombas, paper Koopa Turtles and even a paper Bowser and Baby Bowser. Before long there are 2D toads cowering everywhere around the mushroom kingdom, while the 2D and 3D bowsers are building a new axis of evil to kidnap Princess Peach and teach Mario a painful lesson.

Luckily, Paper Mario himself will have something to say about that. Fairly early on he joins the team, transforming our dynamic duo into a trio bent at thwarting Bowser’s aims. In practice, this means a third character in your chain and a third button to control them. What’s more, Paper Mario opens up new trio attacks, where all three leads take turns to hit Bowser’s troops where it hurts with a volley of carefully-timed button presses. 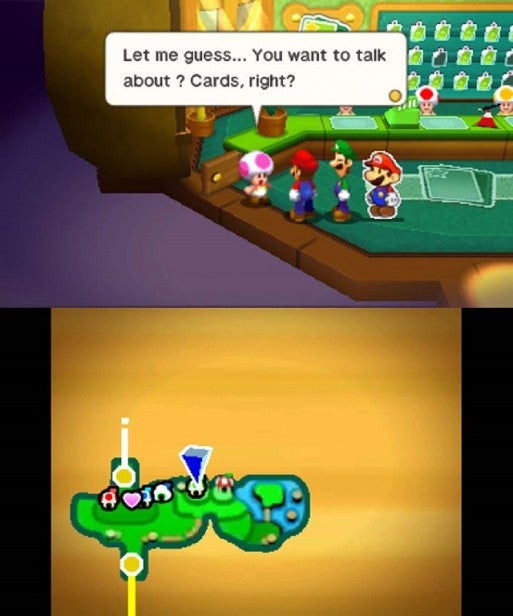 This isn’t deep or complex stuff, but it is fun; accessible enough to make a great RPG for younger gamers, but with enough tactical interest to stop it from becoming deathly dull. New regions bring new dangers, puzzles and mechanisms to exploit. New moves enable you to explore previously unreachable areas of the map. Defeated enemies and bosses open up new combo attacks, allowing you to field a drilling shell or split into three Paper Marios and whack three enemies at once, while a system of star cards allows you to play cards in combat to heal or cause massive damage. Paper Jam is neither as simple nor as monotonous as it first appears.

AlphaDream has also been smart enough to mix things up a little. Boss battles might open with predictable turn-based combat, but then take a diversion into a chase sequence, where a plane-shaped Paper Mario can help Mario and Luigi glide out of danger. There are bizarre quizzes, Toad-herding challenges and hide-and-seek missions to get stuck into. There are even bizarre Papercraft battles, where gigantic Origami Marios and Bowser minions fight it out through a mix of charges, barges, carefully-timed counters and throws. There’s an infectious sense of fun that permeates the game as a whole. 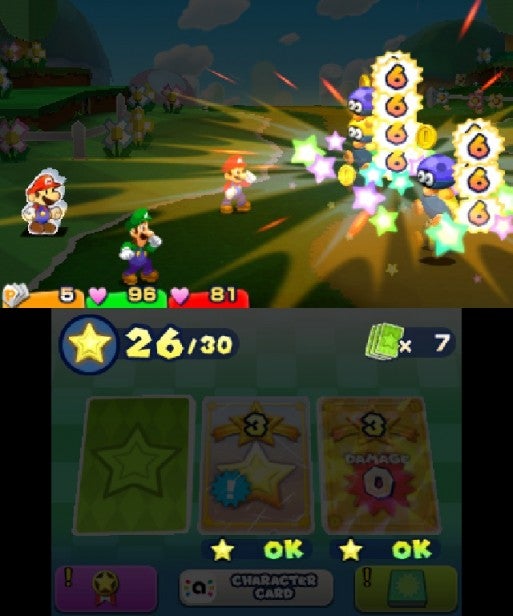 That doesn’t mean you’ll love every minute. The combat does get samey while the lack of depth grows frustrating over longer bouts of play. There are far too many tedious sections where you have to hunt a bunch of hiding Toads, and Paper Jam shows that it’s skewed towards younger players by the way it constantly reminds the player how to play it, as if fearful that you’ll otherwise get stuck and give up. Yet, while it’s not a difficult game, a few odd spikes creep in as the game goes on which seem out-of-step with what’s overall an easy-going, relaxed style of play.

If these minor problems can’t harm the game, it’s because its charm and humour are nigh-on irresistable. It’s a challenge not to love a Mario game where even the Bowsers seem tired of kidnapping the princess, where the 2D and 3D Bowser Juniors take time to develop a dastardly friendship, or where the Toads and Goombas seem to have perfected a style of streetwise talk that’s almost pitifully eager to be hip. The original writers clearly had some fantastic, weird, wild and whacky ideas, while the localization team has had a ball, taking every chance to poke at Mario and video game conventions and make characters as endearingly dumb as they can be.

Verdict
Nobody could describe Mario and Luigi: Paper Jam Bros as an essential, but it’s a fun, relaxed, thoroughly likable RPG that’s as good for younger and more casual gamers as it is for Mario’s more hardcore fans. It might not have much depth or complexity, but it has charm and personality to spare. If you’re looking for a game to keep your 3DS busy over the holidays, this is it.