The UD7006 is Marantz’s latest high-end Blu-ray player, joining the value-led UD5005 in its 2011 range. It’s a universal player, allowing you to spin any physical disc format and a healthy range of digital ones too. It’s even equipped for 3D discs (the first Marantz deck to do so), allowing you to add an extra dimension to movies through a compatible telly.

Being a high-end player with a hefty £800 RRP (and £549.95 online price), there’s a distinct emphasis on build quality and design. This is as classy as Blu-ray players get, thanks to the thick brushed aluminium front plate and Marantz’s characteristic curved panels on either side. There’s a fair amount of buttons to play with, which some may perceive as clutter but they’re tidily arranged and let you control disc playback and audio settings while up close. The large display panel dominates, giving out title, chapter and running time.

The UD7006 is also solidly constructed, fashioned from heavyweight materials and fitted with an extra metal plate to quell vibration. The disc tray is coated in a rubbery substance and glides out with a super smooth, silent action. At 109mm high, it’s a huge piece of kit but that’s par for the course for high-end players.

It’s good news around the back too, with a selection of sockets that’ll satisfy most users. There’s only a single 3D-ready HDMI output, but if you’re sizing up a player this pricey there’s a good chance you’ll already own a 3D-capable AV receiver, so a second output isn’t essential. As you’d expect from an audio-centric brand, Marantz has also included a set of 7.1-channel analogue outputs, which allows you to feed decoded HD audio signals to an amp independently from the HDMI output.

You’ll also find component, composite, coaxial digital audio and analogue stereo outputs, as well as an Ethernet port for your networking needs (more on that later). Anyone hoping to integrate this deck into a custom setup is in luck, as there are remote control, flasher in/out and RS-232 ports. There’s no provision for Wi-Fi though, which is a rather disappointing restriction.

On the front panel you’ll find a USB port for playing digital media files from storage devices, and the good news is that the UD7006 boasts 1GB of internal memory for BD Live downloads, so you don’t have to leave your USB stick plugged in. Even cooler is that you can play music from your iPod/Phone/Pad directly through the USB port.

The UD7006’s main ‘feature’ is its universal status, which allows you to spin any type of disc including Blu-ray (2D and 3D), DVD, CD, DVD-Audio and SACD. And from USB sticks you can additionally play MP3, WMA, AAC, LPCM, JPEG, JPEG, DivX HD, MKV, WMV and AVI.

Thankfully you don’t need a memory device or discs to enjoy your content as this DLNA 1.5 and uPnP-certified deck can stream files over your home network. Compatible files include MP3, WMA, AAC, WAV, MPEG-1/2/4, DivX, H.264, AVCHD and WMV. 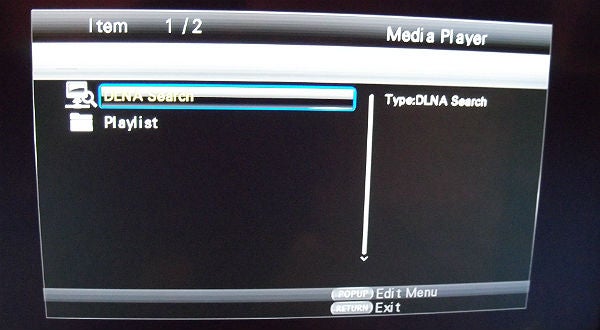 This is joined by YouTube access, which lets you stream the site’s vast range of videos through a dedicated portal in the Home menu. Sure, it’s no match for Smart Hub or Viera Connect, but its presence is an unexpected bonus on a high-end player from a brand that usually prioritises performance over tricks.

Where the UD7006 steals a march on cheaper players is the choice of electronics. There’s an Anchor Bay ABT2015 chip for 10-bit video processing, ELNA capacitors in the output stage and high-grade audio components. What’s more, the Direct Mechanical Ground Construction transmits vibration from the centrally placed disc mechanism through the base, while separated audio and video circuit blocks minimise interference between them.

Another thing that marks this out as a deck for cinephiles is the array of picture adjustments, allowing you to fine tune images to suit your screen. Simply hit the dedicated button on the remote and the menu offers a choice of noise reduction settings (3D, block and mosquito) and a detailed list of adjustable settings including contrast, brightness, black level and gamma. Settings can be stored in five memory presets.

Of course the UD7006 also does the bread and butter Blu-ray stuff like playing discs at 1080/24p, decoding HD audio tracks or outputting them as raw bitstreams and upscaling DVDs to 1080p. 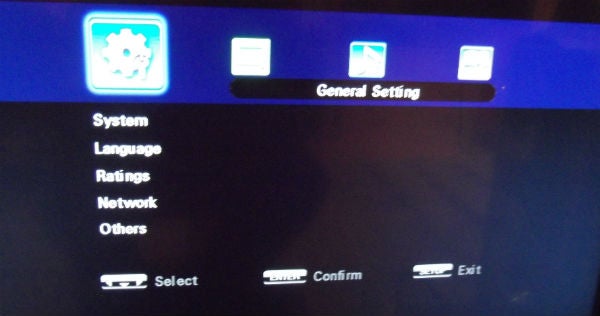 Using the deck is a piece of cake. The Home menu is your first port of call, offering clearly marked icons for Setup, Media Player and YouTube. The setup menu and folder-based media playback menus are helpfully structured and overall presentation is attractive, with bright colours giving it a welcoming feel.

However, there were no signs of life from the DLNA or YouTube functions at first. After carrying out a firmware update that, at times, felt like pulling teeth, YouTube appeared and proved easy to use, with a stripped down ‘banner’ interface that allows you to search for content or browse recommended videos by genres. It’s effective but a little slow to navigate.

We have no major complaints about the remote though, which sports an attractive silver/brushed black colour scheme and well-organised, glow-in-the-dark buttons. Some of these are a little small for their own good and it’s a bit cluttered at the bottom but on the whole it’s a decent effort. You can also use it to control a Marantz amp.

As expected, the UD7006’s 2D pictures are sublime. We tried out Rise of the Planet of the Apes on Blu-ray, and the deck’s talented video circuitry and processors render every last drop of detail in an emphatic, pristine fashion.

The photo-real ape CG looks crisp and super-detailed, allowing you to see WETA’s excellent work up-close as well as exposing some of the more unnatural-looking effects.

In fact, the deep black levels, smooth, natural colour processing and fluid tracking of the apes’ fast movements make every moment of this movie enjoyable to watch, allowing you to invest in the story without being distracted by noise or judder. Great stuff.

The sense of wonder continues with 3D material like Thor. As the camera glides through Asgard in the overblown but dazzling establishing shots, you really do get the feeling of immersion and depth that the technology promises – thanks in no small part to the UD7006’s ability to pass on the left and right 1080p images without any glitches or artefacts.

We really don’t have a bad word to say about the deck’s picture quality, nor do we about its music playback, particularly from hi-res SACDs like Roxy Music’s Avalon. There’s a wonderfully wide frequency range, which means it delivers warm, full bodied bass and sparkles with beautifully-shaped high frequencies – all the while making sure that midrange sounds are solid. All of the instruments are precisely placed within the multichannel soundstage, while vocals are clear and convincing. You can switch off the video circuitry when playing music to further aid clarity.

We’re also impressed by the deck’s handling of multichannel movie soundtracks through the 7.1-channel analogue ports – channels are cleanly separated, effects are smoothly steered and there’s all the depth and detail clarity you’d expect from a Blu-ray soundtrack.

The only gripe we have over the deck’s performance is the amount of time it takes to load a Java-heavy disc. It chewed over Terminator Salvation for 51 seconds before playing it, which isn’t a disaster but not lightning fast.

A deck at this price really should ace the Silicon Optix HQV disc’s test patterns but that’s not the case. It coped with the Video Resolution Loss and Diagonal Filtering (jaggies) tests fine, but violent strobing and flicker on the File Resolution test reveal minor processing shortcomings.

Verdict
Most people shopping for a Blu-ray deck will take one look at the Marantz UD7006’s £549.95 price tag, faint and then pick up a Samsung or Sony for £200 or less. If they do, they’ll get loads of extra features, a wealth of internet content and maybe even built-in Wi-Fi into the bargain. The UD7006 is sorely lacking in sexy features, apart from YouTube and DLNA streaming – the latter refusing to play ball for us.

But anyone who knows the value of heavyweight build quality, high-quality components and the impact they can have on AV performance will appreciate what the UD7006 has to offer – its 2D and 3D picture quality is sublime, while music playback is streets ahead of the budget competition. Its ability to play back any disc is also not to be sniffed at either.