Aggressively specified, this slimline Marantz AVR is more than capable of blowing up boisterous Dolby Atmos action movies or getting down with multi-channel music. It’s well suited as a hub for next-gen games consoles, too – although there’s a 4K 120fps elephant in the room we can’t ignore

The Marantz NR1711 is the latest flagship in the brand’s long-serving slimline NR AV receiver lineup, where functionality and design find favour over raw power.

The NR1711 is the better-specified sibling of the 5.1 NR1510.  A seven-channel amplifier, it offers the choice of either 5.1.2 Dolby Atmos or 7.2 speaker configurations. Power output is rated at 50W across all seven channels.

Priced at £650 in the UK, the Marantz NR1711 can be found frolicking at the shallow end of the mid-range AV receiver pool. Similarly specified and priced AVRs typically stand twice as tall (literally, not sonically). In the US, you can pick one up for $850. In Australia, the NR1711 retails for AUS$1,599.

In all territories, it can be considered good value given the level of specification on offer.

Marantz NR1711 design – Half the stature of traditional AV receivers, but not short on connectivity

The spec of Marantz’s NR range may have evolved over years, but the design has largely remained static. The amp has a familiar curved fascia, with two dials either side of a large and clear display.

It offers six HDMI inputs, but only one output, which means you can’t feed a TV and projector simultaneously.

All HDMIs support Dolby Vision, HLG and HDR10+. One, labelled 8K, is v.2.1 and handles 8K @60Hz with 4K/120Hz pass-through – at least in theory. At present there’s a bug, acknowledged by the manufacturer, which can prevent sound and 4K HFR (high frame rate) vision making it to a compatible display. 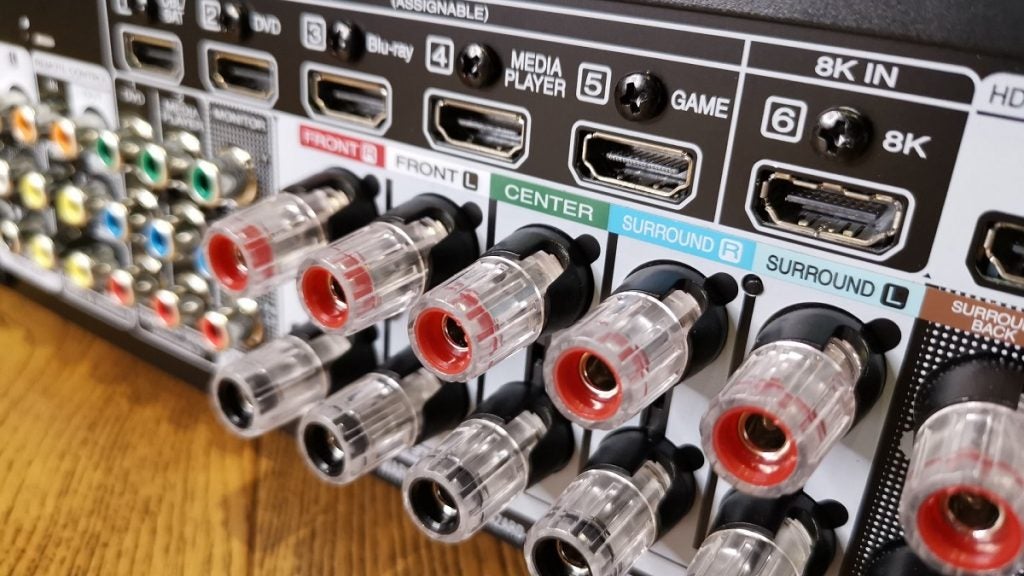 While a firmware update to solve this foible is being hinted at by those in the know, our advice for PlayStation 5 and Xbox Series X owners who wish to play HFR content is to connect your next-gen consoles direct to a compatible TV, then route audio back to the receiver using the eARC HDMI connection. The eARC standard supports 24-bit 192kHz plus lip-sync correction, the latter being a key attraction.

For older hardware, there’s a pair of component inputs, plus assignable analogue stereo inputs. Digital audio is limited to one coaxial and one optical. If you’re a record collector, you’re in luck, since there’s also a phono input. A dual subwoofer output is provided, because two subs are always better than one. 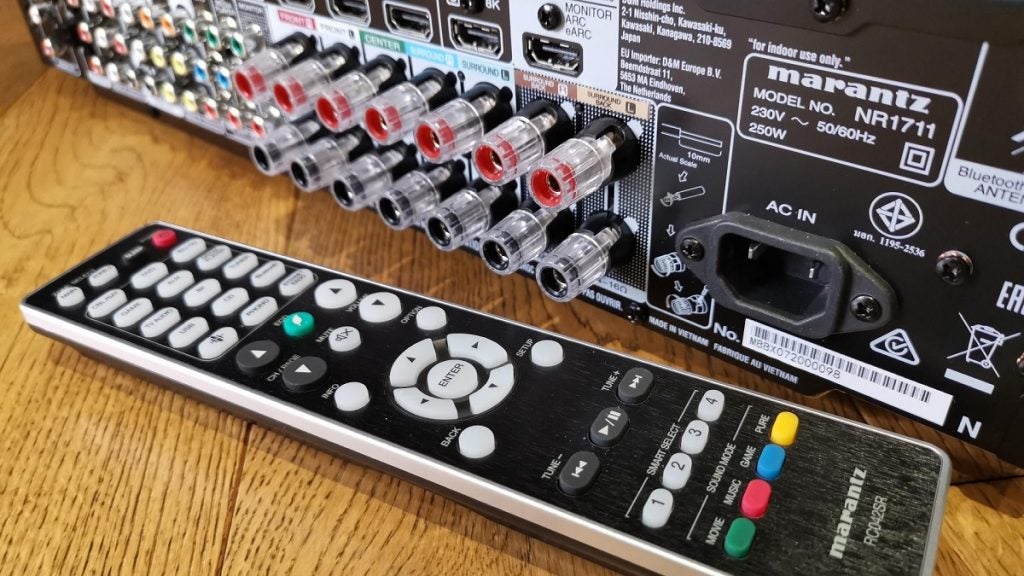 Marantz NR1711 features – It’s game on, but there’s a catch when it comes to 4K 120fps console support

In addition to Dolby Atmos and DTS: X decoding, the NR1711 also offers Atmos Height Virtualization and DTS:X Virtual processing, both of which attempt to create a 3D listening experience, without recourse to physical height or surround speakers. Both work pretty well, provided your expectations are managed. What you basically get is a fuller, fatter sound. 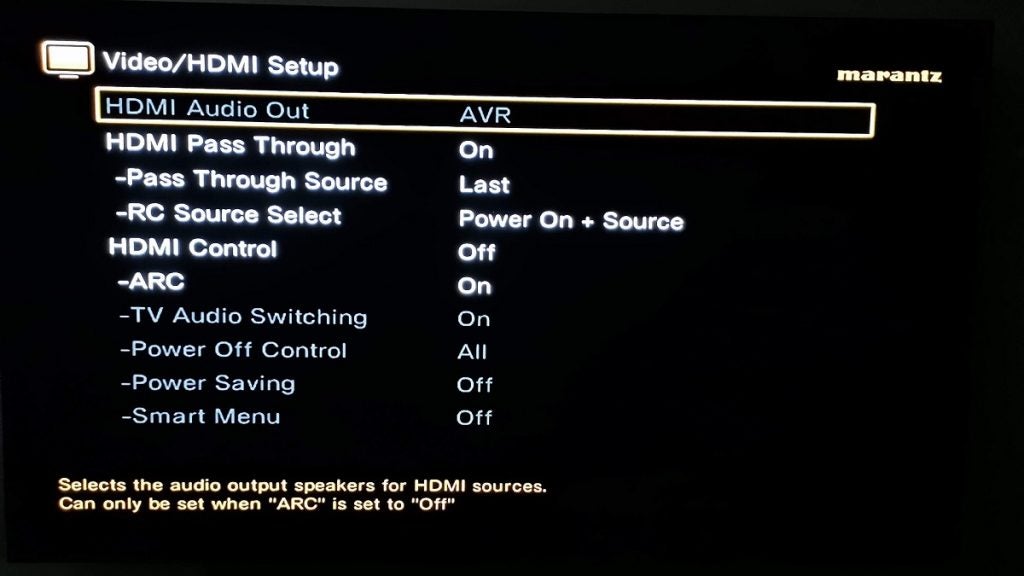 The NR1711 also comes with HEOS built in. This multiroom streaming platform is common to both Marantz and Denon receivers, and allows the NR1711 to serve as a source for any network of HEOS-enabled wireless speakers. There’s also AirPlay 2, dual-band Wi-Fi and Bluetooth. Twin Wi-Fi/Bluetooth aerials screw onto the back panel.

One big plus is that the Bluetooth execution permits wireless headphone pairing, for late-night listening.

Set-up grief (a long-standing consequence of new AV receiver ownership) is eased by the Marantz Setup Assistant, which offers splendidly clear on-screen directions. Room calibration is provided in the shape of Audyssey MultEQ. A new twist is the ability to commit two calibrated configurations to memory, perhaps one favouring two-channel music, the other surround sound.

Marantz NR1711 performance – It won’t fill a theatre, but there’s plenty of attack on tap

The NR1711 is an easy receiver to appreciate. It’s characteristically warm, rather than clinically sharp, and really comes into its own with multi-channel and immersive sound mixes.

It handles fast action brilliantly well, delivering dramatic transients with grunt in reserve. A lack of overwhelming amplification doesn’t diminish big action; the NR1711 still has a brawny attitude. Mysterio’s shockwaves at the opening of Spider-Man: Far From Home wash from front to back with weight and heft. Less demanding, but often more immersive atmospheric effects, benefit from pronounced channel separation and synergy.

Treated with respect and the receiver doesn’t feel strained or fractious under pressure. Objects move around the soundstage with ruthless efficiency, like sonic pinballs. 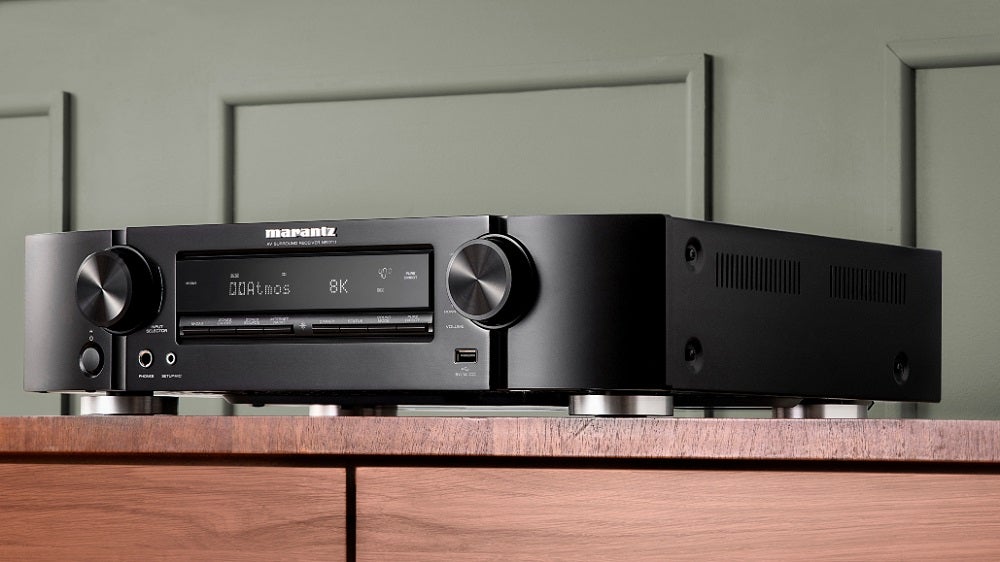 High-res audio support is excellent. Beneath the lid is a Cirrus Logic 32-bit Coyote DSP, with a 32-bit AKM AK4458 DAC on all channels. High-res audio capable, it can handle everything from ALAC, FLAC and WAV lossless files up to 24-bit/192-kHz, to DSD 2.8MHz/5.6MHz tracks.

The NR1711 really appreciates Dolby Atmos Music. Take a listen to Armin van Buuren’s Atmos remix of his dance album Balance and be transported to an Ibiza nightclub, waiting for the foam machine that’s about to kick off. The soundstage for Sucker for Love is immense, emphasising the spatial gulf between centre speaker vocals and rear-channel piano.

The Marantz NR1711 brings much of the functionality you might expect from a high-end AV receiver to the more acquirable mid-range, including 8K support and smart refinements.

With AirPlay 2, Bluetooth, Alexa and Google Assistant built in, you’ll not be stymied when streaming, and its 3D audio performance is hugely entertaining.

Issues remain over its ability to support 4K 120fps gaming (for the time being at least), but the NR1711 remains a stellar upgrade, or first-time AVR.

You should buy the Marantz NR1711 if…

You should not buy the Marantz NR1711 if…