The NR1607 is a slim home-cinema receiver from Marantz, a brand perhaps best known for its stereo amplifiers. The latest in a line of half-height models, it’s designed to slip easily into your equipment rack without sacrificing on full-fat home-cinema performance.

Not only is this seven-channel receiver equipped for the latest 4K sources, it’s also loaded with immersive audio codec support. If your jam is Dolby Atmos movies and High-Res Audio, it could be just what you’re looking for. For those not after Dolby Atmos, Marantz still offers last year’s NR1506 – a lookalike 5.1 channel alternative with a generally comparable spec. 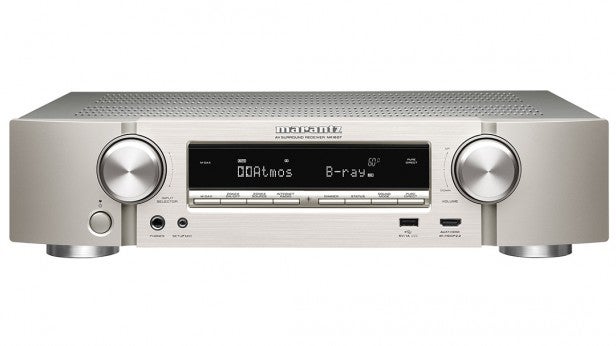 It may boast leading-edge technology, but there’s still something old school about the NR1607. The curvy fascia is classically Marantz.

To the rear are seven HDMI inputs, which should be enough to accommodate most sources. All support 4K 60Hz with HDCP 2.2, so there will be no problem hooking up 4K set-top boxes and UHD Blu-ray players. But there’s only one HDMI output, so the receiver can’t easily be used with both a flat-panel TV and a projector.

HDMI passthrough enables connected sources to be viewed without powering up the whole system. We’ve seen this before, but one new enhancement here is the ability to select different inputs via the remote, even when the AVR is in standby. In everyday use I relied on this far more than you might expect.

The front panel sports an additional HDMI input plus a USB port for media playback. There are also two digital audio inputs (one coaxial, one digital), plus three AV analogue inputs. There’s even a pair of component inputs, but you’ll probably never need them. The IR remote control is helpfully backlit. 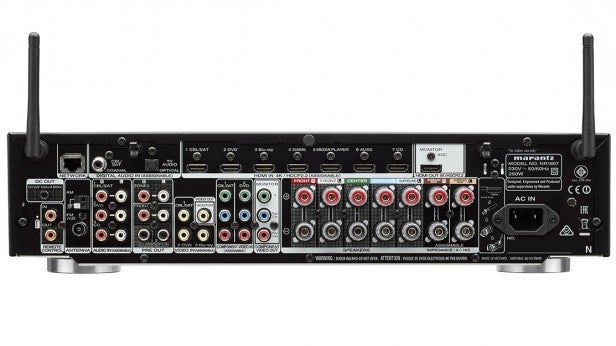 There isn’t much missing from this AV receiver’s feature roster. With seven channels of amplification on board, it can be set up either in a 5.1.2 Dolby Atmos configuration, or if you want to forego the height channels, regular 7.1. The amp is rated at a nominal 7 x 50W (into 8 Ohm). This is modest in AVR terms, but probably more than enough for the typical TV room.  If you need more power, there are pre-outs for the main stereo pair.

The provision of fold-down antennas on the rear confirms integrated Wi-Fi, as well as Bluetooth. You can stream audio via Apple AirPlay or through Spotify Connect. FM and internet radio is also on tap.

Some of the improvements over last year’s NR1606 model are pretty subtle. Marantz has widened the audio delay option to 500ms, to combat even the laggiest of panels. There’s also now a quad-core DSP engine on board.

The NR1607 is Dolby Atmos-ready out of the box. Connect to the internet during setup and you’ll be able to firmware update DTS:X support too. There isn’t actually much that’s tangibly different between these two object-based sound systems, but it’s great to have access to both.

The receiver is DLNA 1.5-compatible, making it a doddle to play music files from any network-connected NAS devices. 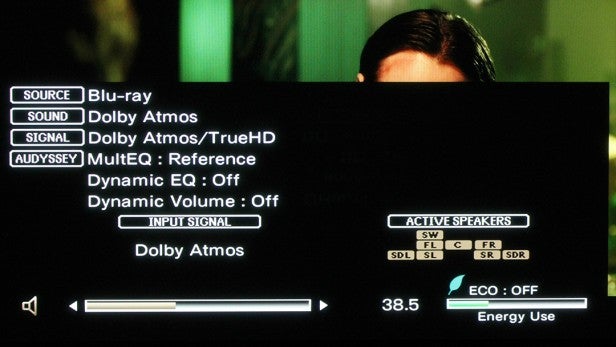 I’ve enjoyed previous iterations of the Marantz NR line, but they’ve all tended to sound fairly similar. For this model, there’s been a bit of a re-tune. The result is certainly lively. It’s musical when it needs to be, yet finds the reserves to deliver fast transients too. It’s a lot of fun to listen to.

Auto-room correction comes from Audyssey, more specifically an entry-level implementation of MultEQ offering 2x filter resolution, with optional Dynamic Volume and EQ. You can measure from six listening positions. Marantz supplies a cardboard tripod for the mic, to ensure you calibrate at ear height. The process doesn’t take very long, and I thought it did a rather good job of dialling the receiver into my listening room.

In Dolby Atmos 5.1.2 – using a pair of Dolby Enabled up-firing speakers – the receiver has energy and sparkle to spare. A run-through of Dolby Atmos trailers doesn’t disappoint. Panning above and around is effortless, while deep bass cracks such as thunder. 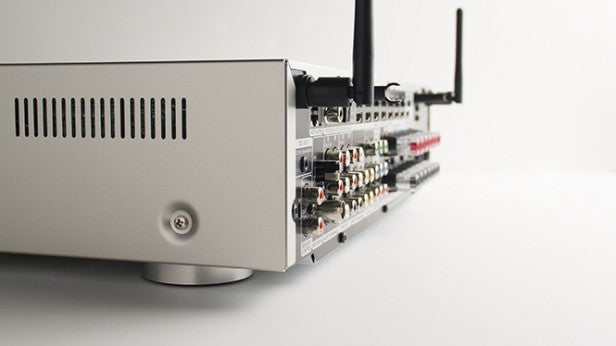 The DTS:X mix of The Last Witch Hunter (Blu-ray) casts a visceral cinematic spell. Thunder rips through the soundstage as Vin Diesel acts to save a plane from crashing due to some magical mishandling. The soundstage is big and cinematic. The experimental track Gravity, available on the DTS 2016 demo disc, is an intoxicating example of electronic immersion – with low LFE ripples, bleeps and tinkles arranged with delicious invention. The NR1607 sounds tight and agile throughout.

This Marantz may be primarily a home-cinema projector, but it doesn’t disgrace itself with two-channel High-Res Audio. File support includes DSD (up to 5.6MHz) and AIFF. It has a lush mid-range that sounds sweet with radio-centric pop, rock and dance. You’ll probably get rather less from it if you favour more complex classical indulgences, though. 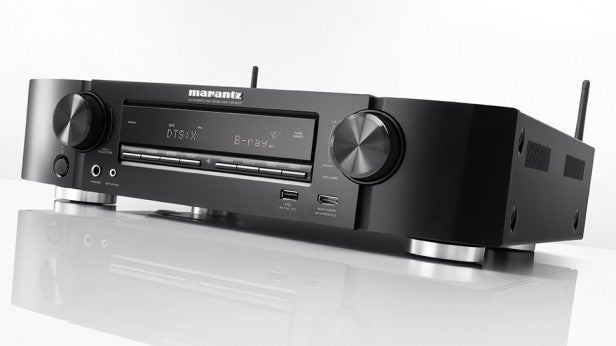 Any fears that a cut-down chassis translates to a half-pint performance are convincingly quashed by the NR1607. With Dolby Atmos and DTS:X encoding, 4K HDCP 2.2 HDMI inputs, plus extensive High-Res Audio file compatibility, this is an AV receiver that won’t run out of steam anytime soon. It also sounds remarkably fine, with the one caveat that it’s unlikely to dislodge roofing tiles without considerable help from El Niño.

If you want a leading-edge home-cinema experience for the living room, but know you’ll never be able to swing a traditional heavyweight AVR, the NR1607 demands an audition. Add a sub/sat Atmos speaker package and you’ll be good to go with everything from UHD Blu-ray to Sky Q. Recommended.

An impressive home-cinema solution for those with less space.