In nearly every respect, the Melody X does exactly what a £500 all-in-one should do – and with some style. With a little more sonic aggression and authority, this all-in-one system could be pretty much ideal.

The Marantz Melody X (or M-CR612) is a sort of audio Swiss Army knife: beneath that unassuming exterior, you’ll find all manner of useful bits and pieces.

After all, the all-in-one, just-add-speakers, stereo system has a fair few bases to cover these days. But if there’s a company out there that has the know-how, the past form and the necessary commitment to the mainstream stereo cause, it’s Marantz. So is the Melody X all the equipment you’ll ever need, or is it – a bit like a Swiss Army knife – too much stuff in too small a package?

“Unassuming” would be the most polite way of describing the Melody X’s design. You might also go with “functional”. Either way, it isn’t much of a looker – especially if you opt for the the black finish over Marantz’s take on silver, which is more of a pale champagne gold.

Of course, one person’s unassuming and functional is another’s understated and sophisticated. But one thing is for sure: at just H11 x W28 x D30cm, it isn’t going to require a whole lot of space in your room.

Plus, at just 3.4kg it won’t put any kind of strain on your shelves, either. In fact, that minimal weight, along with the rather hollow and resonant feel of the plastics from which the Marantz is built, makes the Melody X feel a little less premium than it looks.

This isn’t to suggest this unit is in any way poorly made or finished. If anything, the opposite is true. It just doesn’t feel like there can be much going on inside the box.

There are a couple of recessed strips of light on either side of the central section of the fascia (to add a touch of mild visual interest, I expect), a handful of the most important controls, and a bright three-line display… and that’s about it for the front.

There’s nothing at all happening along the sides of the box, while on the top there’s a featureless expanse of plastic that’s seemingly been chosen for its ability to attract and retain fingerprints.

Just because there may not feel like there’s much going on here, that’s no reason to be fooled. In fact, the Melody X is loaded with facilities and functionality.

For starters, it includes a CD drive. There’s Wi-Fi and an Ethernet socket just for extra stability. There’s Bluetooth connectivity and Apple AirPlay 2 compatibility, too. Radio is covered by DAB, DAB+ and FM reception, plus internet radio access via TuneIn.

HEOS multi-room and streaming functionality means Tidal, Spotify Connect, Amazon Prime Music and Deezer are all available (as well as painless multi-room compatibility with other Denon and Marantz HEOS equipment). The Marantz Melody X will hunt out network-attached storage devices, making music stored there available too (up to a 24bit/192kHz or double-DSD maximum resolution).

Physical connections extend as far as a couple of digital optical inputs, a stereo RCA line-level input and corresponding output, and a pre-out for a subwoofer. There’s an output for headphones as well. A phono stage for a turntable might have been nice, but why ask for the moon when Marantz has demonstrably provided the stars?

Power – should you be driving just one pair of speakers – is a more-than-adequate 60W per channel. The Marantz will happily power a second pair of speakers and, thanks to its four discrete channels of power amplification, each pair will receive 30W per channel and can be set at independent volume levels.

There are a number of ways to get the Melody X to do your bidding – and none are via the unpredictable Marantz Hi-Fi Remote app, which is probably a good thing.

Obviously, there are the physical fascia controls. These run to CD control, input selection, power on/off, volume up/down and menu navigation; broad-strokes control is available right there on the device.

There’s also a tactile and comprehensive, logically laid out remote control; sadly, though, it’s unlit. Or you can put the Marantz on the same network as your Amazon Alexa, Google Assistant or Siri equipment and use any of those mic-equipped devices to operate the Melody X. It’s about as effective as these things ever are – which means Alexa and Google are fairly reliable, and Siri isn’t.

Marantz Melody X sound quality – It’s easy-going nature is a positive, but it could use some more attack

The good news, at least as far as headlines go, is that the Marantz Melody X has an entirely consistent sonic signature, no matter which of its numerous sources you’re listening to.

From an MQA-mastered CD of the 50th anniversary reissue of The Doors’ Waiting For The Sun, via a Spotify stream of Stereolab’s Mass Riff to Madeleine Peyroux’s version of Leonard Cohen’s Dance Me To The End Of Love in 128kbps form via FIP radio, the results are broadly the same. The Marantz sounds poised, balanced and just slightly matter-of-fact.

It’s a spacious presentation the Melody X serves up, with the mid-range in particular giving plenty of elbow room to vocalists. There’s detail revealed in a singer’s delivery, so a technician as accomplished as Peyroux is loaded with character – and she’s secure in her area of the soundstage, even as other instrumental strands occupy the sound areas of the frequency range.

There’s a reasonably polite level of attack available at the top end. John Densmore’s jazz-inflected drumming during Hello, I Love You enjoys worthwhile bite and shine, without ever threatening to get out of hand. There’s similarly lavish detail levels available here, too, which makes whatever music you’re listening to all the more convincing – if there’s nuance in a recording (particularly from the mid-range upwards), the Marantz will reveal it for you. 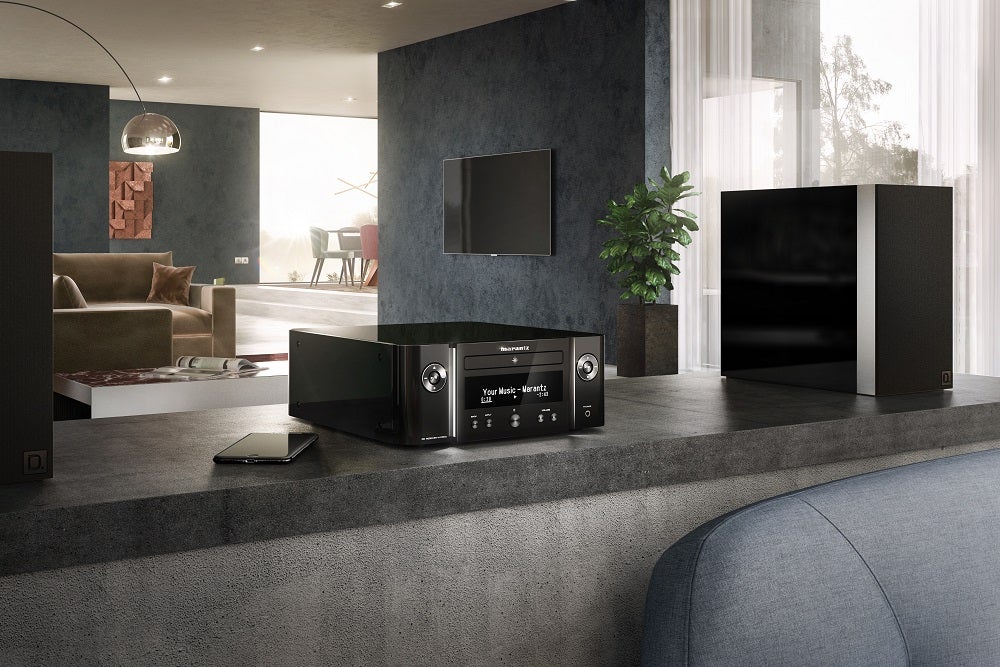 It’s down at the bottom of the frequency range that the Melody X is less certain. Bass presence is quite understated, which is to the detriment of a recording such as Secret Machines’ Sad And Lonely. Where there should be remorseless punch, there’s instead just a suggestion of low-frequency threat. To really propel the tune forwards, the Marantz needs to be a little more assertive.

It’s a pity the Melody X is so reticent, because in lots of other ways it’s a self-assured listen. Stereo imaging, for instance, is impressive – a widescreen recording such as Secret Machines is open, easy to follow and well lineated. There never appears to be any danger of the Marantz tripping over its own feet, and it remains unflappable even at considerable volume.

The integration of the frequency range is smooth and stepless, and there’s plenty in the way of low-level dynamics to describe the flavour of the music (if not the broad dynamic headroom to describe its temperature).

Ultimately, it’s this easy-going and unthreatening nature that is the Marantz’s one undoing. In virtually every respect, it does exactly what a £500 all-in-one should do, and in some style. With a little more sonic aggression and authority, it could be pretty much ideal.

You should buy the Marantz Melody X if…

The time when products such as this – true all-in-ones – enjoyed any kind of pre-eminence is long gone. Wireless, in all its convenient glory, is where the real action is. But that doesn’t mean units such as the Melody X aren’t completely valid.

You shouldn’t buy the Marantz Melody X if…

Yamaha’s MCR-N570D, is similarly priced and has a similar suite of functionality. It’s even smaller and more discreet than the Marantz, and it has a typically Yamaha sonic signature: smooth, unflappable and just slightly overheated. It’s probably nicer to the touch than the Melody X – although, ultimately, not quite an involving listen.