Marantz doesn’t do all-in-one home cinema systems, but if it did… they’d probably include a unit like the Melody Movie, or M-ER803 to give it its less poetic model number. It’s a combined Blu-ray player and two-channel AV receiver, like the ones you find in an all-in-one system but a bit posher. All of the playback, processing and power handling takes place in this single compact box – all you have to do is add the speakers and a powered sub. As this product hails from Marantz, an audio brand through and through, naturally it’s designed to satisfy the needs of hi-fi buffs as well as movie lovers, but with a price tag that could buy you two 5.1 home cinema systems is it enough to justify the outlay?

The Melody Movie certainly earns its corn on the aesthetic front. It’s a beautifully designed little box, measuring just 280mm wide and fashioned in a suave black finish. Like Marantz’ receivers, the curved edges at each end communicate a sense of elegance, while the white lights on the fascia and glossy black top panel are designed to catch the eye and keep it there. It’s constructed from an impossibly robust aluminium cabinet, which makes it surprisingly heavy – always a good sign. This wonderful build quality and gorgeous styling are exactly what you’d expect for this sort of money, laying the groundwork for what we hope will be an equally satisfying performance.


The front panel is fairly busy, featuring two rings of buttons, one for playback and one for menu control, which sit either side of the disc tray and a small but informative display panel. Towards the bottom is a flap that conceals a headphone port, minijack input, a USB port for storage devices and iPods plus three buttons that let you switch between the various sound modes.

There’s a useful if not overly generous array of connections on the rear panel, headlined by the HDMI v1.3 output that carries 1080p Blu-ray pictures to your TV. There are no HDMI inputs though, so you can forget about running other hi-def sources through it. There aren’t any digital audio inputs either, which is a big surprise – that means there’s no way of feeding sound from digital TV receivers like Sky+ into the unit, and you’ll have to rely on the pair of analogue stereo inputs instead.


It’s not all bad news though – the speaker connections are robust banana plug compatible binding posts and there’s a second USB port that lets you keep a memory device permanently connected without it poking out of the front panel. You’ll also find a subwoofer pre-out, composite video output, inputs for the FM/AM radio aerials, an M-XPort (which lets you connect Marantz’s optional RX101 Bluetooth receiver) and an Ethernet port.

Unfortunately, the Ethernet port’s duties amount to nothing more than downloading BD Live content from the Internet – there’s no DLNA networking, streaming or anything of that ilk. That’s not particularly impressive at this price, particularly when countless cheap Blu-ray decks can stream music, videos and photos from networked PCs, and the frustrating thing is that the Melody Movie is the sort of product that would really benefit from music streaming given its hi-fi centric approach. Yes, you can play MP3, WMA, AAC and FLAC from USB devices, but that involves uploading files on a PC, which is a pain if you’re constantly acquiring new music.


The Melody Movie features a 2 x 70W Class D digital amplifier and the internal circuitry has been designed with plenty of care and attention, taking its cue from Marantz’s reference Blu-ray decks like the £5k UD9004. Marantz has taken the ‘simple and straight’ approach to circuit design, which means short, uncomplicated signal paths, while the circuit boards have been designed to achieve lower impedance. 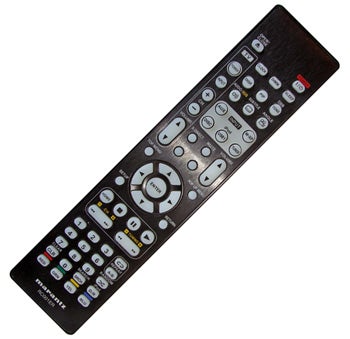 Also buried inside this box of tricks are a few other features, including Dolby TrueHD and DTS HD Master Audio decoding, DVD upscaling to 1080p and Dolby Virtual Speaker, which adds a surround sound flavour to stereo output. You can also enjoy a surround sound effect when listening through headphones thanks to the built-in Dolby Headphone technology. The Source Direct mode delivers the sound as it is on the disc while DBB mode boosts bass output.


Aside from playing the compressed music formats mentioned above, the Marantz will also play AVI and WMV from USB devices connected to the rear port but not the front one, although DivX files can’t be played back through either USB port – another black mark.


Thankfully, the Melody Movie is very easy to use, primarily due to the attractive, intuitive menu system. Fire it up and you’re greeted by the Home menu. This uses a bright blue background and a clever curved submenu structure that starts on the left of the screen and works its way across, scrolling up and down at each stage. It’s slick, responsive and thorough, plus the use of icons makes it easy on the eye – the small text is the only cause for concern.


The remote lacks this clarity of layout, with buttons confusingly scattered all over the place and microscopic labelling. On the plus side, the main menu controls are sensibly positioned, input selection keys are clearly signposted and the buttons glow in the dark.

As its name suggests, the Melody Movie really sings with both movie soundtracks and music. We loaded up ”Iron Man 2” on Blu-ray, skipped to the Monaco Grand Prix scene and through our Teufel Theater 3 speakers the Marantz tackles the slam-bang action with relish. You can feel the roaring engines of the F1 cars on the grid shudder your bones, and if the sound of them zooming past the camera doesn’t get the adrenalin flowing then get yourself to a GP sharpish.


Throughout the scene, the whirlwind of effects is delivered with raw aggression and power, but always under complete control. The sound of sliced-up cars crashing to the ground is underpinned by a tight, thumping low-end, there’s a thick, muscular boom as Vanko smashes his whips on the ground, while the clattering of metal on metal boasts sharpness and bite but no harshness at all. This is a great advert for home cinema separates.

Despite its power, the system doesn’t miss out any of the little details going on elsewhere, like the clicking and beeping of Stark’s suit, or the electric crackle of Vanko’s whips. Dialogue remains clear too, allowing you to pick out Tony’s little quips as the chaos rains down around him, even without the presence of a dedicated centre speaker. It’s fast and dynamic, inspiring excitement with every sound – it’s just a shame you can’t add surround speakers to expand the soundstage, as Dolby Virtual Speaker adds very little width.


This superb movie performance is backed up by silky smooth CD playback, which is its clearest advantage over cheaper 2.1-systems. You can instantly hear where the extra money is going – from soul and jazz to rock and pop, it handles a variety of genres with sophistication, warmth and a completeness that you simply don’t get from the vast majority of budget Blu-ray receivers. Of course, it helps pairing it with your own speakers as opposed to the lightweight ones you get with one-box systems.


Although the Melody Movie takes a while to get a picture on screen due to its sluggish disc loading (”Terminator Salvation” took one minute to load, ”Iron Man 2” 47 seconds), it’s certainly impressive when it arrives. ”Iron Man 2’s” slightly grainy transfer is faithfully reproduced with immaculate detail, bold colours, subtle shading and fluid motion. Dark scenes are perfectly visible too, with superb shadow detail giving the picture plenty of depth.


We also ran through the Silicon Optix test disc and the Marantz competently handled most of its patterns. That said, there was some unusual juddering on rotating bars, strobing boxes on the Film Resolution Loss test and nasty flickering during the pan across Raymond James stadium, all of which suggests that the on-board video processing isn’t quite as powerful as we first thought.


Despite its stellar sound performance, in other areas the Melody Movie isn’t quite the all-encompassing, must-have system we hoped it would be. There’s too much missing from the spec sheet to completely justify that lofty price tag, including networking, digital inputs and DivX playback. But there are still plenty of positives to celebrate, such as the amazing build quality, alluring design and, most importantly, its mature, refined sound quality, which is streets ahead of 2.1-channel systems from the likes of Samsung, LG and Panasonic. If that’s your only demand, then the Marantz is a worthwhile purchase, but be sure to check out what the competition has to offer before buying.