One-box soundbars are designed to deliver six-channel sound from a single unit, which is ideal for people who don’t have room for a full home cinema speaker system. But despite their growing popularity, the products we’ve tested so far have been a bit of a mixed bag. Most offer decent sound quality, but when it comes to replicating rear-channel effects they’re far from convincing.


However, with Marantz’s debut one-box wonder, there’s cause to be a little more optimistic. Just over three years ago I visited Marantz’s Japanese HQ and was given an early demonstration of a new technology called OPSODIS, the brainchild of Dr Takashi Takeuchi who dreamed up the idea while studying for his PhD in Acoustics at Southampton University of all places. Dr Takeuchi took the idea to Marantz who were only too eager to develop it.

Dr Takeuchi’s demonstration revealed OPSODIS to be far more effective than the other soundbar systems I’d heard during the same trip, even in its embryonic state. The difference is that it doesn’t reflect sound off the walls, a method that doesn’t suit all room shapes and sizes, but instead uses a unique (and scientifically complex) sound control theory that widens the effective area.


Fast-forward three years and OPSODIS has blossomed into a fully formed technology, which can be found inside the ES7001 (amusingly dubbed the ‘Cinemarium’), which at around £800 not only costs more than its main rivals but also more than a decent one-box 5.1 system – here’s hoping it has the talent to justify it.


In terms of design, discretion is the order of the day. The ES7001’s understated, simple design, dominated by a long black speaker grill, allows it to blend into your system without diverting attention from your TV. It’s still attractive though, with a silver strip running along the bottom that houses a small info display, a row of indicator lights and a few buttons. The enclosure is also solidly constructed from extruded aluminium and feels reassuringly heavy, which is no surprise given the amount of hardware stuffed inside.

This includes six speaker drivers arranged in a tweeter, midrange and woofer configuration, each one powered by a digital amplifier. Also on board are three 32-bit digital processors, one of which is used for Dolby Digital and DTS decoding and the other two are used to generate surround sound.


The Cinemarium (I think we’ll stick to ES7001 from now on) is also equipped with a healthy array of connections, including two HDMI v1.1 inputs and one output, three optical digital audio inputs (labelled DVD, TV and Game) and two stereo audio inputs. There’s also a pre-out and control jack for the optional SW7001 subwoofer, plus a remote output to connect and control other Marantz equipment (such as a CD or DVD player) using the ES7001’s remote. Dolby Digital, DTS and AAC signals can be fed into any of the HDMI or optical digital audio inputs.


Setup is fairly simple, but would have been even easier with an onscreen menu. Everything is displayed in the tiny panel on the front, which means you’ll need the manual to decipher the little words and symbols that appear.

Once you’ve found the optimum position (it can be placed in an AV rack or above the TV screen) you need to punch in certain parameters using the remote. The Elevation button sets the correct height while the Seat button tells the unit how many people are in the audience, as this affects how the sound is dispersed. You can also set the listening distance, turn the sub output on and off and toggle through the Dolby Pro Logic II modes. There’s also a night mode for enhanced listening at low volumes.


The supplied remote boasts an excellent arrangement of buttons, all of which are nicely sized and clearly labelled, while the menu controls are comfortably placed. We also like the individual buttons for each input, which makes it easy to flick between sources.


So how does the sound performance compare with the 2004 demo? Very favourably indeed. With a Denon DVD-1940 pumping Pearl Harbor’s Dolby Digital 5.1-channel soundtrack into the ES7001’s digital audio input, it’s clear that the technology has been refined over the last three years.

The most striking aspect is how much power and bass the unit musters. Even without the optional subwoofer, explosions are so deep and muscular that we were ducking for cover during the Japanese attack on Pearl Harbor. But the other sonic elements are equally enthralling, from the crisp, piercing rattle of machine guns to the desperate cries of testosterone-fuelled pilots. There’s a directness and smoothness to the sound that sets it apart from its cheaper rivals. 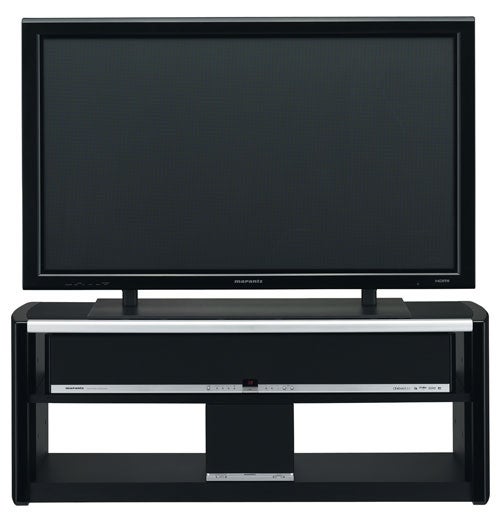 And the good news keeps on coming – OPSODIS delivers by far the most convincing rear channel effects we’ve heard from any soundbar. The rear-speaker drivers throw the surround information far and wide, surrounding the listening position with crisply reproduced and expertly steered effects. The non-reliance on walls is an advantage, allowing the unit to work well in a variety of awkward test locations, but on the downside you need to sit in precisely the right place to get the full effect – move from that position and audibility of surround effects reduces considerably. But to be fair, that applies to most soundbars.


As an added bonus, the quality of music playback is superb. A run through of Reel People’s Seven Ways To Wonder CD reveals tremendous warmth and attention to detail.


Although it’s no match for a real 5.1-channel system, the ES7001 offers the best performance we’ve encountered from a soundbar by virtue of its excellent surround effect placement and smooth, powerful playback of movies and music. It’s just a shame that Marantz couldn’t have shoved OPSODIS inside something a bit cheaper. At close to £800, it’s almost twice the price of soundbars from Philips (which also boasts a built-in DVD player) and Yamaha, and we’re not sure its capabilities or features are sufficiently superior to justify such a premium. But if you have the money and want the best sound quality no matter the cost, then this is the soundbar for you.