The BD7004 is the middleman in Marantz’s latest Blu-ray line-up, sandwiched between the reference-class UD9004 and entry-level BD5004. With a price tag pushing £700 it’s clearly aimed at buyers who take home cinema seriously, and that’s reflected in the classy build quality and high-grade electronics lurking inside it.


But with a number of much cheaper players on the market, packed with all sorts of cutting-edge features and impressive picture tech, the BD7004 needs to come up with something special to justify the extra expense.


You certainly feel like you’re getting £700 worth of player when you first haul it from the box. Thanks to an extra metal plate fixed to the top cover, the thick aluminium front panel and all-metal chassis, it tips the scales at a substantial 4.9kg. Heaviness doesn’t necessarily translate into top-notch performance but it’s always a reassuring sign, and rigid construction like this helps reduce vibrations that can have a negative impact on performance.

Thankfully Marantz has also made its chunky bodywork look delectable and distinctive. The front panel is curved and adorned with neat rows of buttons down either side of the centrally-placed disc tray, which doesn’t rattle forward like most budget decks but slides out with a beautifully smooth action. The silver embossed Blu-ray logo and disc tray detailing add an extra touch of glamour.


As you’d expect from a deck designed for demanding home cinema systems, there’s plenty of action on the back panel. There are Dolby TrueHD and DTS HD Master Audio decoders on board and the 7.1-channel analogue outputs let you enjoy hi-res soundtracks even if your amp lacks HDMI sockets. A separate set of stereo audio connections, isolated from the multichannel sockets, is best used for straight-up CD playback, while the coaxial digital output passes the 5.1 audio stream to a receiver.

The BD7004 is a Profile 2.0 player, hence the Ethernet connection on the back, but our experience with the Wi-Fi equipped LG BD390 makes this wired connection feel even more clunky than it did before. Sure it’s fast and stable, but nobody wants a LAN cable trailing across their house.


The lack of Wi-Fi is hardly surprising – there aren’t many companies that can keep up with the Koreans’ rate of innovation, let alone Blu-ray latecomers like Marantz – but at £700 you’d at least hope for some built-in memory for BD Live updates. Sadly that’s not included either, which means you have to load an SD card into the front-mounted slot to store downloaded content.


The upside to having this SD card slot on board is that it’ll play back MP3, WMA, JPEG and AVCHD files. It’s also pleasing to note that DivX HD is supported from BD-R/-RE, DVD-R/-RW and CD-R/-RW, which expands the range of playable hi-def content at your disposal.

After a lengthy boot-up time, we explored its menu system and were hit by a sudden sense of deja vu. Apart from the Marantz logo in the background, it’s identical to that of the Denon DVD-1800BD and DVD-3800BD, suggesting some inevitable technology sharing at D&M Holdings, the parent company that owns both brands. Quite how far the similarities extend into other areas of the deck’s design isn’t exactly clear, but Denon’s players also sport SD card slots on the front and the remotes look remarkably similar.


Still, in this case familiarity doesn’t breed contempt thanks to the practical and stylish menu layout, which is split into Quick (the essential settings), Custom (the full range of options) and Initialize (which lets you reset the deck’s settings and clear data from its memory).


The remote fares well, with the uncomplicated labelling and intuitive button placement making it feel very natural in your hand. You get some additional controls at the bottom that allow you to control volume and input selection on compatible Marantz receivers. 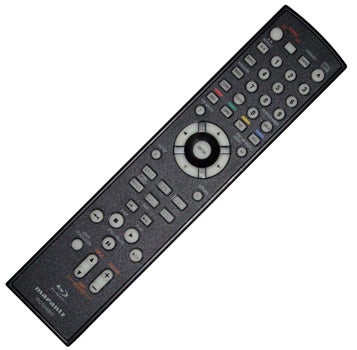 A range of picture adjustments is accessed by pressing the Mode button – you get five memory positions, each with its own adjustable levels of contrast, brightness, sharpness, gamma correction and colour. It’s a shame they’re hidden away, as these settings prove very useful. The Mode key also lets you access the virtual surround mode, and a range of other functions depending on the content you’re watching.


In stark contrast to decks from OPPO and LG, the BD7004 loads up Blu-ray discs with all the urgency of a sedated sloth. Both ”Spider-Man 3” and the newer ”Monsters Vs Aliens” discs took exactly a minute to start playing, and it also takes a painfully long time for the deck to spit out a disc.

There are no complaints when it comes to picture quality. The job of any Blu-ray player is to deliver the digital 1080p signal to the screen over HDMI without any glitches or interference and the BD7004 does it flawlessly.


”Monsters Vs Aliens” looks absolutely stunning – the deck wrings the last drop of detail from the pin-sharp CG graphics, and its grasp on colours is second to none. Bold hues are reproduced with breathtaking purity and the deck easily gets to grips with tonal nuances and subtle shadow work, resulting in some wonderfully solid and three-dimensional images. We also slipped ”Angels & Demons” into the tray (courtesy of Woolworths.co.uk) and the BD7004 conveys live-action images with the same conviction, particularly when it comes to the movie’s frequent dark interior scenes, in which none of the ornate details gets lost in the shadows.

Noise is never an issue and motion is tracked with judder-free fluidity. With the Silicon Optix HQV Benchmark Blu-ray, it breezes through most of the tests but takes a while to detect the correct cadence on the Film Resolution test pattern, and even when it did there were some strange ‘blooming’ artefacts within the vertically striped boxes.


The player boasts Anchor Bay’s VRS processing for upscaling DVDs, and a superb job it does too. ”Kingdom of Heaven’s” epic visuals look crisp and untainted by noise. Subjective movie viewing doesn’t reveal any jagged edges, block noise or motion problems, and even when we switched to the HQV DVD the BD7004 didn’t put a foot wrong.


Marantz comes from a hi-fi background, so naturally music playback is of the highest order. After kicking back with a range of CDs, we had nothing but admiration for the full-bodied, sharp quality of its sound, due in no small part to the superb array of high-quality audio components Marantz has put to work inside the unit.


We can’t fault its HD audio decoding either. It really goes for the jugular during the Golden Gate bridge scene in ”Monsters Vs Aliens”, reproducing the chaos with smoothness, detail and precision.


Although it’s beautifully built and offers impressive performance, the BD7004 doesn’t inspire the same level of excitement as the LG BD390 – a player that costs around a third of the price but packs loads more features and, if we’re being honest, similar picture quality.


That said, the Marantz is much more sophisticated musically, so if audio and build quality are key buying factors and you don’t care about web downloads or PC streaming, then the Marantz BD7004 will be right up your alley, but otherwise save money and go for the LG.