A decent tripod is one of the best investments you can make as a photographer and there are numerous good reasons why this is so. For starters you’ll be able to take sharper pictures in general; not only at slower shutter speeds as you might expect, but also at faster speeds that are usually (and correctly) considered perfectly safe to shoot hand-held at.

Just as importantly, having a tripod to hand will allow you to choose from the full aperture range offered by the lens you are using, including its so-called ‘sweet spot’ (often around f/8) where it’ll deliver optimal sharpness across the whole frame. Furthermore, if available light is in short supply then having a tripod to hand also means you’ll no longer have to resort to throwing the aperture wide open (or cranking up the ISO) in order to get the sharpest shot possible – assuming you’re shooting a stationary subject, that is.
And, of course, there are other benefits too. As well as taking sharper pictures and having more control over depth of field, a tripod will also allow you to experiment with all kinds of creative techniques such as long-exposure, multiple-exposure and even time-lapse photography.
The biggest single consideration when looking for your ideal tripod is finding one with the right balance between strength and durability and weight and portability. After all, there’s not much point in buying a tripod that offers tank-like construction if it means you never take it out because it’s too heavy, whereas similarly there’s no point in buying something so lightweight and flimsy that it can’t support the weight of your camera and/or just blows over at the merest hint of a breeze. 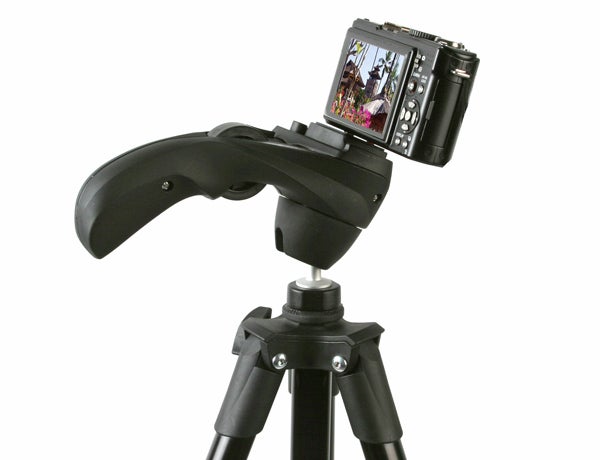 The Manfrotto MKC3-H01 we have here is essentially a travel tripod, which means it’s geared much more towards portability than strength. That said, given that it has a claimed maximum load capacity of 1.5kg we’d expect it to be sturdy enough to support a mid-weight DSLR and zoom lens, while packing down into something small and light enough to be carried around all day. Let’s take a closer look and find out if that is indeed the case.
The Manfrotto Compact Kit tripod range comes in two variations: the P0-series of ball-head tripods are designed exclusively for cameras, while the H0-series we have here uses an advanced ball-head with a two-position ‘camera-video’ switch that’s designed to open up its appeal to budding videographers as well as stills photographers. While in ‘camera’ mode, the ball-head (and attached camera) can easily be manoeuvred into a portrait position, while in ‘video’ mode this vertical movement is locked off in order to help you keep panning shots smooth and level. 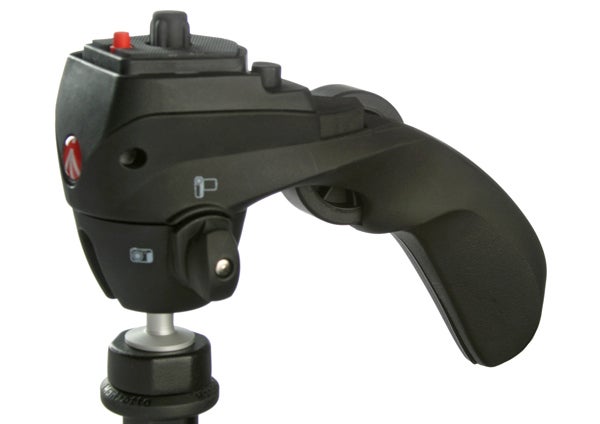 The ball-head is operated via a sculpted handgrip that feels oddly chunky given the all-round slightness of the rest of the tripod. Located on the top of this handgrip is a quick-release button for the camera mounting plate and a thumbwheel that operates the main ball-head locking mechanism. The supplied camera plate uses a universal 1/4inch screw design that should fit the overwhelming majority of cameras – from cheap compacts to mid-range DSLRs.
Each leg of the tripod is made up of five aluminium leg-sections that are locked off by four technopolymer (plastic) leg-locks. The legs have an oval cross-section, while the centre-column is more triangular in shape. There is only one leg position – an angle of 21-degrees – and with all the legs fully extended the gap between each leg is approximately 96cm. Fully closed and with the ball-head handle folded back into the legs the MKC3-H01 measures 46cm in length and weighs 1.15kg – small enough to fit inside (or attach to the outside of) a rucksack, and light enough to be barely noticeable should you want to keep it with you all day. 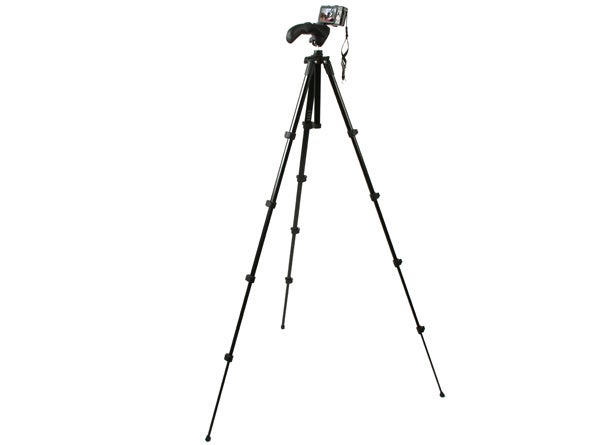 The five leg-sections of each leg vary slightly in length with the thinnest legs slightly longer (at c.29cm) than the top sections (c.24cm). With the centre column down but all legs extended total leg length is 134cm, giving a total height of 143cm to the quick-release camera mounting plate. Raising the centre column to its highest position this extends to 163cm – about shoulder level for someone of average height.
The first thing that strikes you about the MKC3-H01 is just how light it is. This is very much a carry-all-day kind of tripod, and as such would prove ideal for hikers and active landscape photographers looking to spend all day in the hills or on the move without getting weighed down with kit. 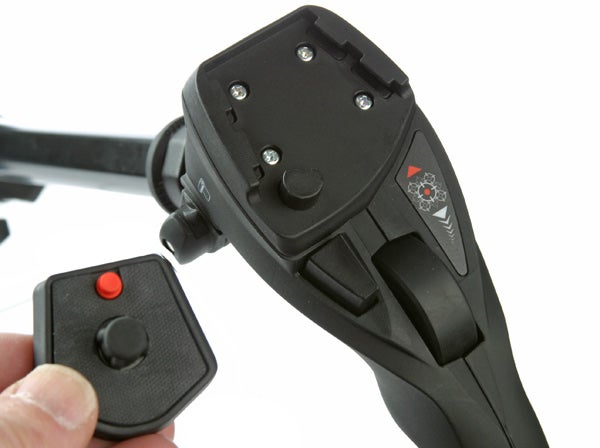 Of course, the crucial question with any tripod that’s been purposely designed to be light and easy to carry is just how sturdy it is, and whether or not you trust it to support your camera. Field testing our review sample with a Nikon D90 and Sigma 17-50mm f/2.8 lens (combined total weight: 1.35kg) brought us close to the tripod’s claimed maximum load capacity of 1.5kg and yet we still felt, with some reservations that we’ll expand upon in a moment, that our camera was safe and secure.
We’re also pleased to report that the thumbwheel-operated locking mechanism works very well too, with no incidence of creep even with our relatively front-heavy zoom attached. Thanks to the chunky hand grip, maneuvering the ball-head proves pretty easy too. Our only minor concern regarding durability is with the thin (approx. 0.7cm) metal column that protrudes from the base of the ball-head connecting it to the top of the centre column. If anything on the tripod looks like it could break through mishap then this particular part looks to be the most likely contender.
As with many tripods, the MKC3-H01 is far more stable when the centre column is down. Extending it up to its maximum reach makes your camera feel precariously perched and also facilitates a small amount of wobble when pressing the shutter button (if possible, it’s always good practice to use a remote or even the camera’s self-timer when using a tripod). We also found that the MKC3-H01 felt substantially sturdier when the thinnest legs at the bottom of each leg are not extended. Of course this does cut approximately 29cm off the total height of the tripod, but the trade-off is a much more stable-feeling platform. 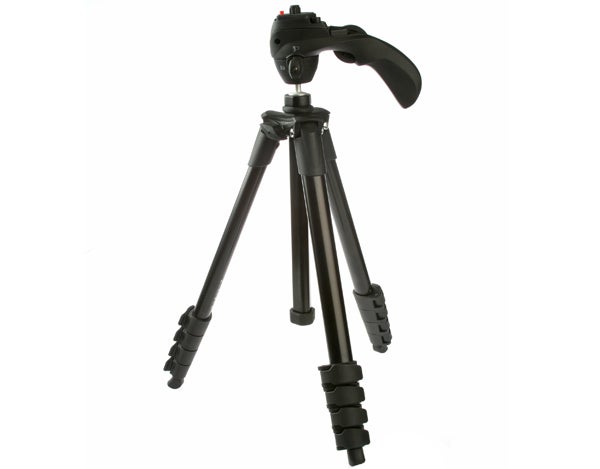 In use, we found the four leg-locks easy enough to operate, being neither too stiff no too loose. With a bit of practice we found we were able to fully extend all of the legs in less than15 seconds, with the time taken to fully fold it all back down about the same. One thing that may bug some users is that the centre column cannot be removed, and the legs only have the one position, meaning it’s impossible to get the quick release platform lower than about 44cm. If you’re fond of shooting from ground level this may not be the ideal tripod for you.
Also, given its light overall weight, we would ideally like to see a hook placed on the bottom of the centre column so that the tripod can be weighted down in windy conditions with bag or suchlike. As things stand, the MKC3-H01 isn’t really designed to take on a windy day. We’d be reluctant to use it in such conditions anyhow. Of course this is really just common sense, rather than any inherent fault with the tripod itself though.
Verdict
Lightweight, extremely portable and yet relatively robust, the MKC3-H01 is undoubtedly a quality bit of kit. Built to support up to 1.5kg, it’ll easily cope with anything from an advanced compact to a compact system camera to a mid-weight DSLR and lens. If you’re looking for a tripod that won’t weigh you down for use in calm conditions then the MKC3-H01 ticks all the right boxes.