What is the Magimix Nespresso Pixie?

For those who like a different look for their kitchen appliances without replacing them, the Pixie Clips coffee machine could be the answer. It comes with two pairs of interchangeable glossy ABS side panels that simply push on and pull off, so you can alter its aesthetic in an instant.

There’s also the option of 12 other coloured and patterned panels at £15-£30 a pair so you can change its appearance as often as you like. Beyond its visual appeal, it’s also a solid coffee machine, brewing espressos and lungos from Nespresso capsules at the touch of a button. The Nespresso range of 23 Grand Crus, plus limited editions, gives a wide choice of coffee. 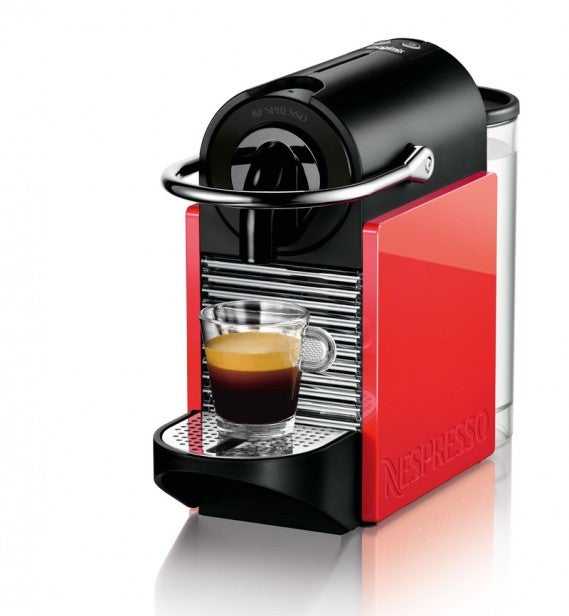 The basic shape of the Pixie Clips hasn’t changed from its predecessor, the Pixie, which was launched about four years ago and has remained a popular machine. It’s easy to see why the formula is unaltered – the Pixie Clips is sleek and compact with a design that’s pared back without feeling plain. The water tank at the back is equally streamlined and while it’s not the largest, it packs in an ample 800ml with a lid that can also be used as a carry handle for easier filling and refitting. 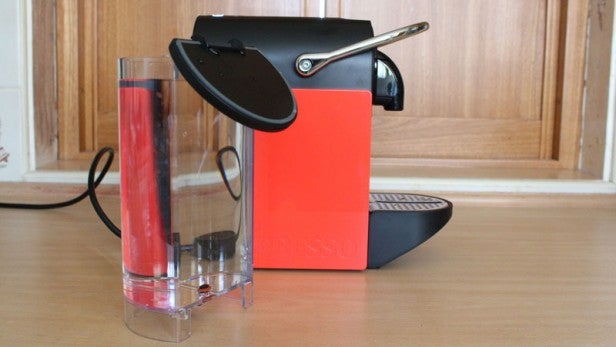 A hinged, perforated drip tray sits at the perfect height for a morning espresso but it also flips up to make room for larger cups. Above this, its ribbed plastic front neatly disguises the internal bin, which can accommodate 9-11 used capsules, and features backlighting to add a little extra sparkle when the Pixie Clips is switched on. 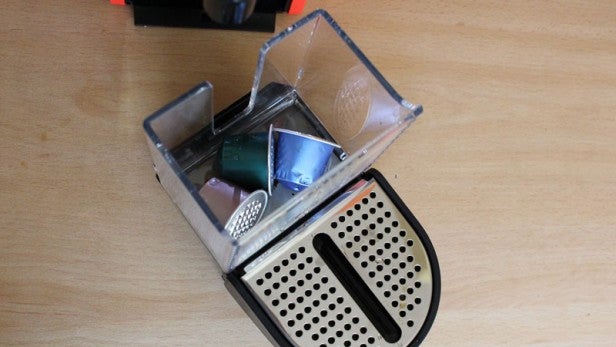 It’s slightly heavier than some ultra-compact machines at 3kg but a 1m power cable gives some flexibility about where it can be sited on a worktop. A smart eco feature switches the machine off after nine minutes of not being in use, although this can be extended to 30.

Changing the Pixie Clips’s side panels has to be done when the machine is cool, so it’s best to tackle this before switching on and without the water tank and drip tray in place. There’s a shallow recess at the bottom of each to grip onto and while they’re difficult to clip and unclip during the first few uses, attaching and removing becomes easier with practice. This can either be done manually or with a key, which is included, to help prise them off. 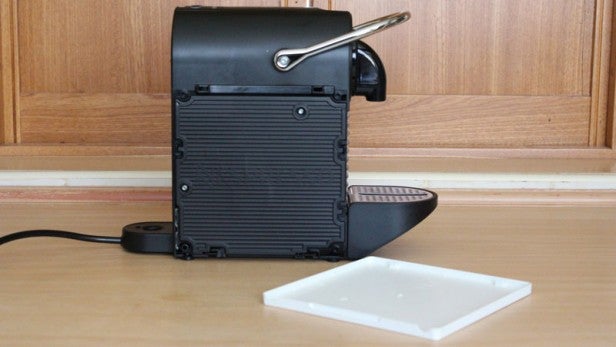 What to do with the spare set in the meantime isn’t clear, and it’d be handy to have a storage bag to prevent them becoming scratched in a drawer.

Besides a discreet power button, there are only two buttons for drinks (espresso and lungo) and it’s ready to make coffee in around 25 seconds from switching on. Each is pre-programmed for a set amount of coffee but these can be altered by holding down each of the buttons. 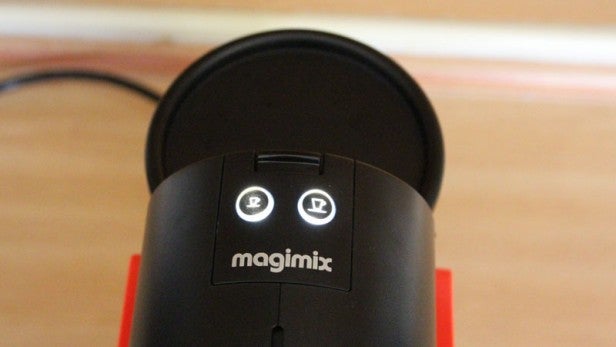 The Pixie Clips will start making coffee straight away if a button is selected during warm-up, so there’s no need to wait, plus the flow can be stopped by pressing the button again while it’s brewing.

Inserting a capsule was simple – the central bar rotated back to reveal a capsule-shaped recess, which closed to secure the capsule by rotating the bar into its original position. 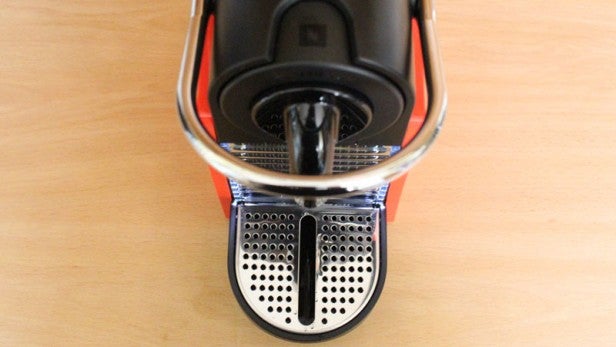 Closed with bar down 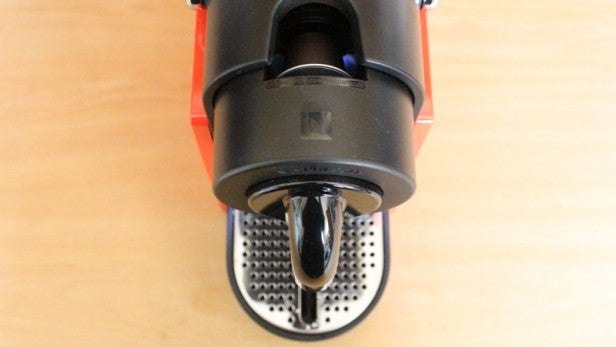 For any height of cup other than a small or espresso cup, the drip tray needed to be folded up. However, the curvature of the drip tray in its raised position only allows for a limited width, so large mugs were further away from the spout and only just within reach.

The auto switch off is frustratingly short, especially in the morning when distractions often take more than nine minutes, so being able to extend this to 30 was a handy function. 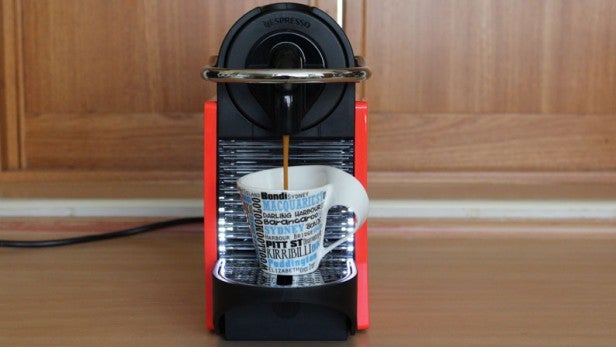 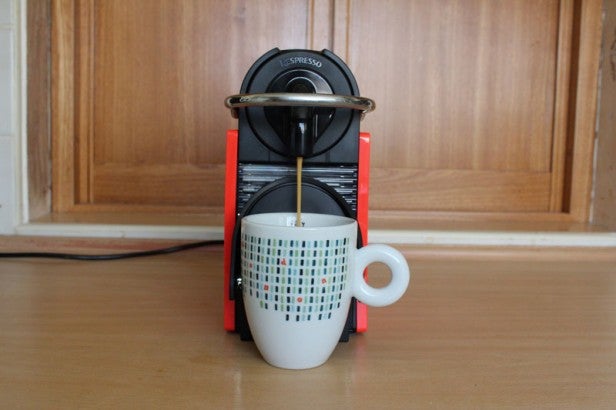 Accommodating a big mug with the drip tray removed

Magimix Nespresso Pixie – How good is the coffee?

While the Pixie Clips is confined to two basic drinks, the coffee’s none the worse for it thanks to 19 bar of pressure producing a fragrant crema and smooth-bodied coffee. The ever-expanding selection of Grand Crus should keep any aficionado occupied, as the capsules range from intense strong flavours to vanilla-infused blends as well as four decaffeinated options. As good as the coffee may be, if you love milky drinks, it’s best bought as a bundle with an Aeroccino or you might want to consider a more expensive machine such as the DeLonghi Nespresso Lattissima which does the milk bit itself. 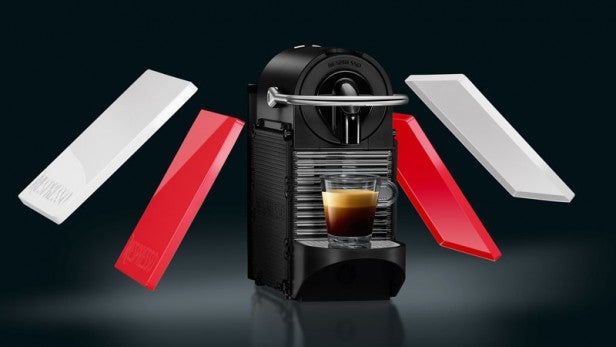 Should I buy the Pixie Clips coffee machine?

Compared to other compact pod machines, the Pixie Clips is a marginally more expensive but it’s still around the same price as a Pixie, so the changeable side panel feature is an extra that hasn’t bumped up the cost.

While they don’t affect the performance of the machine, the panels make owning one a bit more fun, plus if you’re renovating your kitchen or move the Pixie Clips from room to room, you can be sure that it’ll always coordinate. As with any pod system, the drinks are a matter of taste, so be sure you enjoy the variety of Grand Crus before investing.

Choice and variety are the name of the game when it comes to the ever-changeable Pixie Clips but fortunately, good coffee hasn’t been overlooked.