iPod docks come in all shapes and sizes, and with all manner of extra functions tacked on. However, it’s not all that often you find one that does just about everything. The MagicBox Beam is just such a device, though, with DAB and FM tuners, internet radio connectivity, DLNA media streaming, a touchscreen and, of course, the iPod dock. There’s little it can’t do. Apple’s AirPlay is the most obvious omission. While it’s not quite a master of all, it’s a pretty solid all-rounder.

The MagicBox Beam appears a fairly stylish unit from a glance, with its wide and short stance, central touchscreen, and slim stand. However, up close its abundance of plastic and slight lack of finesse are evident. The dull grey plastic panels used to make up the bulk of the body looks bitty and a bit thrown together – unibody it most certainly isn’t – while the section that surrounds the screen could really do without the MagicBox logo and the grey bezel. It’s certainly not laughably bad but neither does it disguise its clearly budget construction all that well. 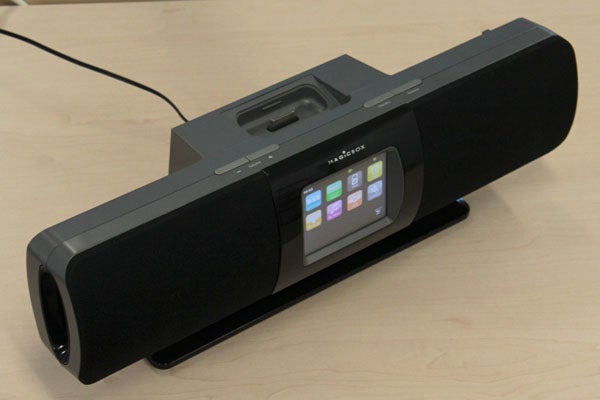 It’s a similar story with the build in other areas. The buttons, while nicely positioned and easy to operate have a wobbly and – one hesitates to say – cheap feel.

One notable plus point is the inclusion of a separate wall mount. Just unclip the stand, screw the mounting plate to a wall and slide the device onto the mount. It’s held fairly securely and looks pretty good too. 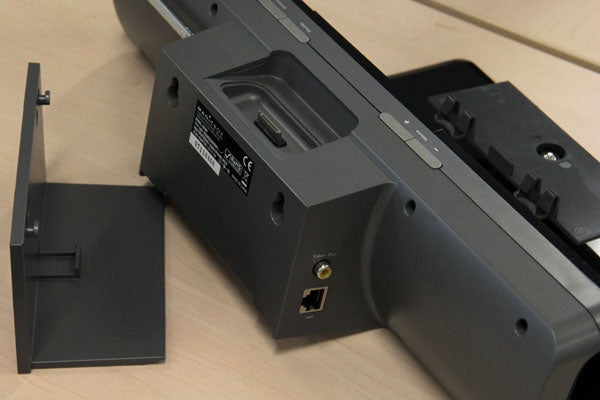 You also get a proper telescopic aerial, rather than a pathetic bit of wire as used on some cheaper radios. 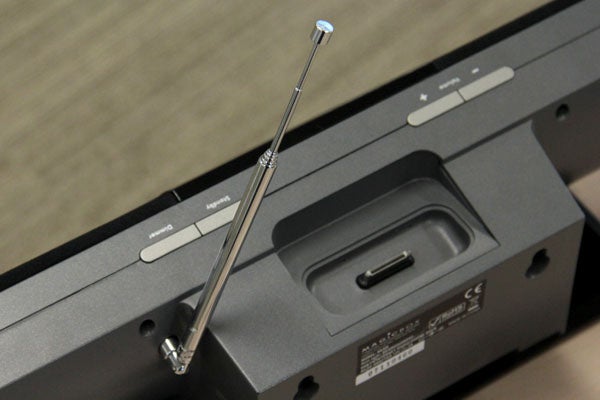 Connectivity is mostly another positive. There’s an auxiliary input for plugging in anything from an mp3 player to a TV, both Ethernet and Wi-Fi for all the various network functions and a rather pointless video out phono port (you can theoretically output videos from your iPod or iPhone but as on all such docks the quality is so poor it’s not worth bothering with). There’s also a USB socket but this is for firmware updates only. The only obvious missing features are a headphone out or any other audio output.

The screen at first doesn’t look all that impressive with a milky, dull
quality to it. However, this is actually a more understandable issue
considering the device’s price and that it’s a touchscreen. You would
not expect to get a capacitive, multi-touch, glass screen at this price,
and no amount of clever design could get round this. And, sure enough, it
uses a plastic resistive touch sensing layer. This means you have to
press it – rather than just touch it – a little to register a response.

Otherwise, though, the screen is great. It’s large enough (3.5in) with a high enough resolution to read easily, it produces strong colours and remains surprisingly readable from all angles, despite being an LCD panel. Crucially, it’s easy to read from the comfort of your bed. Touch response is also excellent, with even a casual prod eliciting an instant response. 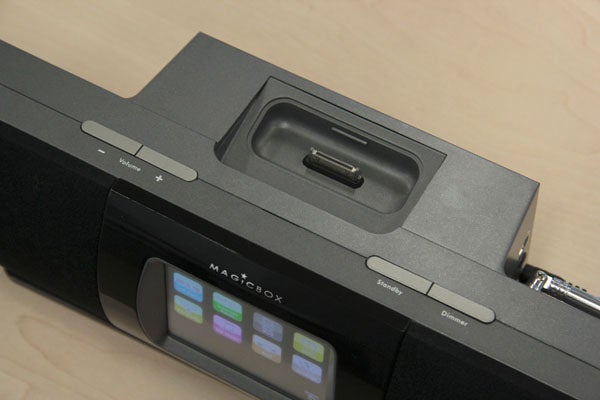 The real trick here is that MagicBox has created a great interface that makes having the touchscreen a bonus rather than just a gimmick. All the icons are large and easy to read, and more importantly, easy to press. Everything from tuning the radio to selecting your streaming tunes is surprisingly intuitive. 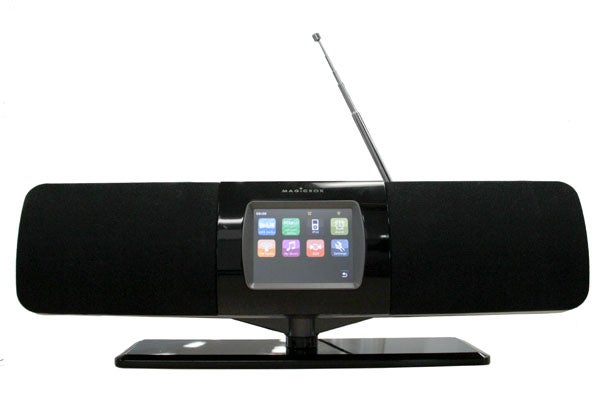 Part of the success is that the interface is consistent. Whatever page you’re on you know that in the bottom left is the button to return to the main menu, tapping the middle will bring up settings for the mode you’re in, and on the right are buttons for going back and bringing up the volume control (though you’re much more likely to just use the volume buttons than this). 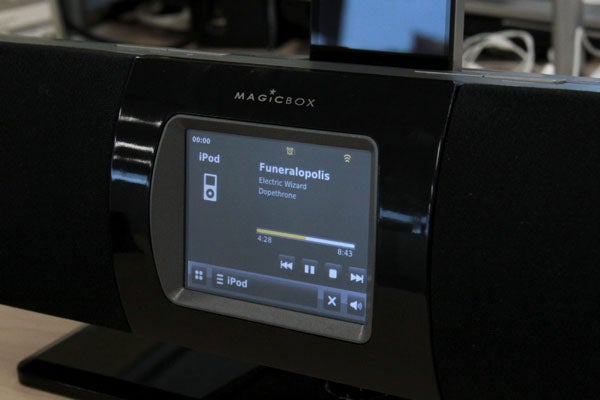 If this all sounds like it should be a given then let us assure you that nothing could be further from the case – touchscreen interfaces on audio devices are notoriously bad so it’s particularly nice to see one that breaks that trend. 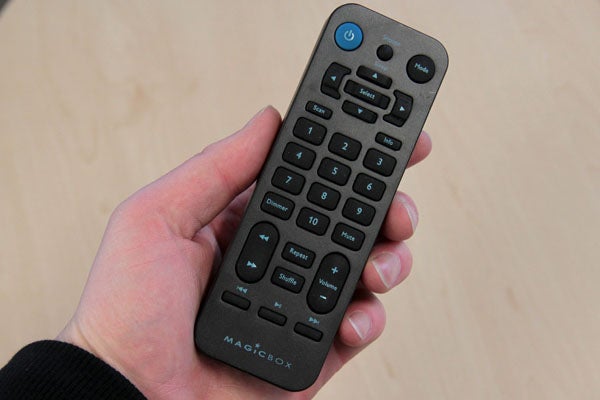 In many ways, the included remote is also a bit plasticky and utilitarian (like the chassis of the dock) but actually it has a chunky charm to its styling and functionally it’s superb.  The buttons are large and easy to tell apart thanks to a sensible layout and them being different shapes and sizes.

The MagicBox Beam is primarily an iPod dock and in this role it performs admirably. Plug your device in and it’ll kick in straight away. You can then control it using either the screen, remote or the iDevice itself. The readout while tracks are playing is also easy to read. The one surprise let down here is that it doesn’t charge an iPhone 4S, though it does work with all other iDevices that will fit in the dock.

Switch to DAB radio and the limitations of the resistive touchscreen are highlighted when trying to scroll through the dozens of stations on offer. But it’s only a bit slow rather than downright annoying. Otherwise, the interface is easy to use with one-touch access to your 10 presets, storing a new preset, changing stations and station info. Reception was as good as most other equivalents we’ve tested. 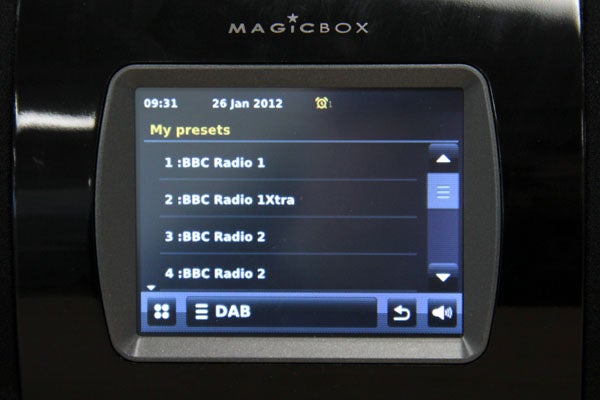 Using FM is similarly easy, with the touchscreen proving a particularly good way of adjusting tuning. Again, you have quick access to your presets, while flipping between auto tuning and manual tuning requires just a single tap. Moreover, you can grab the virtual frequency marker and drag it to the spot you want. It’s not the most accurate way of tuning but for quickly getting to the right ball park, it’s a neat trick. 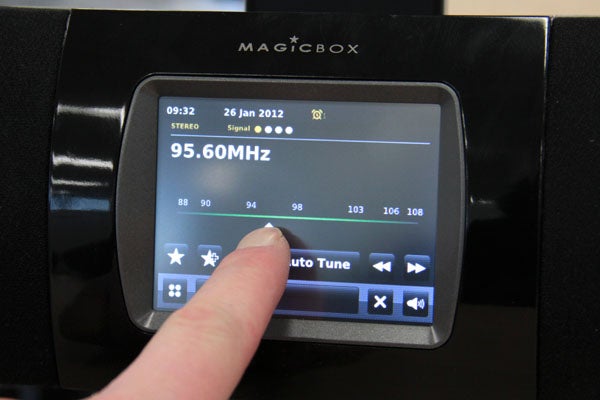 Internet radio suffers from the same slow scrolling as DAB but we’re yet to find an Internet radio that isn’t somewhat of a chore to setup, simply because there are so many stations on offer. Once you’ve found the ones you like, it’s again easy to add up to 10 favourites. Networking setup is also surprisingly easy, due to the neat interface.

Alarm functionality is the main extra function of this device, with no other esoteric games, calendar apps or other such nonsense on offer. You get two alarms that can be set to go off once, daily, at the weekend, or during weekdays with a choice of DAB, FM, Internet radio, iPod or a buzzer to wake you up. You can also choose the volume. 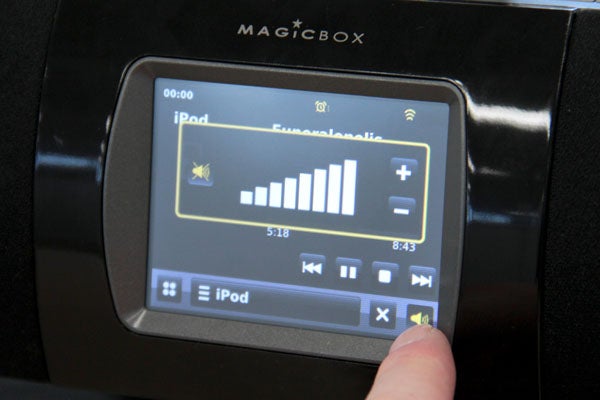 Other settings include setting the alarm snooze and idle timeout times, on and standby backlight brightness, and at what point the display turns off when in standby. Essentially there’s enough that you should be able to set the machine up to just your liking.

Now, considering the Beam is only 220 x 280 x 172mm, it’s clearly not going to blow your socks off but we have heard some audio devices considerably smaller and cheaper than this that sound impressive. Here though, there’s a distinct lack of real bass, giving it a slightly weedy tone. It’s a real shame there isn’t either a stereo line output or a sub output, as adding a decent sub could easily transform this into a much more powerful unit.

As for clarity, it’s okay. It’s fine for casual listening – rocking along while cooking your dinner or getting dressed in the morning – but doesn’t hold up to much scrutiny. It’s somewhat on a par with Pure’s Evoke range in terms of power and range, though Pure actually has it beat, with a fuller tone and less noise at high volumes. All told, we’d expect better for a £170 device.

However, it’s clear you’re paying a premium for all those features and that touchscreen – few devices offer as much at this price. Is it a premium worth paying? That depends on how discerning a listener you are. If you’re happy with something to just pump out a few pop hits and listen to spoken word radio then it’ll pass muster but if you’re looking for something with a bit more finesse then there are many much more accomplished units for the same money – you’ll just have to sacrifice the extra features.

The MagicBox Beam is almost a surprise hit. Its combination of an iPod dock, FM, DAB and internet radios and a great touchscreen interface to manage them all makes for a pleasingly easy to use all-in-one music system. However, its sound quality is a bit disappointing and really only suited to casual listening – one for the kitchen and bedroom but not one to call upon for party duty in the living room.