Before you can think about tying it to one of the previously mentioned apps you’ll need to download the Echo Utility app from the App Store. Here you’ll be able to connect the watch and accessories like the heart rate monitor. Additionally you can change watch display settings for date, time, picking digital or analogue clock faces and selecting whether to have white text on a black background or vice versa.

Hitting the top left button on the watch initiates the search for a nearby smartphone and does a take a couple of attempts before it makes a connection. Next up is syncing with one of the compatible apps. We tried it out with MapMyRun and Strava for runners both of which you’ll need to head to the Sensor settings to pair again. If you switch between apps as we did, you’ll need to pair the watch with the app once again, which can be frustrating if you plan to use it for MapMyRun and the cycling version of Strava for instance. 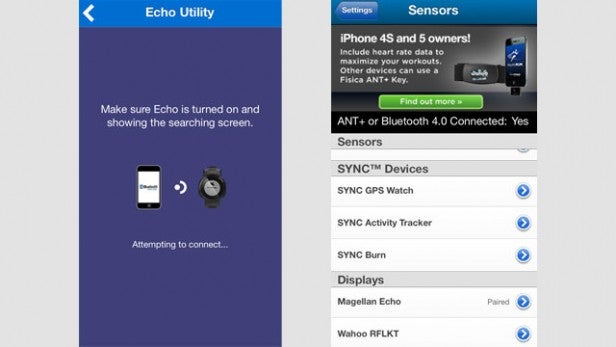 As the cycling apps require cadence tracker we stuck to testing the Echo for its running support matching it against the TomTom Runner to track GPS accuracy. Once you are ready to run, you can hit the bottom right button on the watch or begin recording from the app. Again, each app offers the information in different ways. The Strava app delivers distance, time and split pace while the MapMyRun offers information across multiple screens with distance, time on one screen with pace and calories on the another. Music control appears to differ from each app where the Strava app automatically starts playing music and only appears to let you pause the music. The MapMyRun app let’s you skip tracks and offers an additional display to show track title information.

In terms of accuracy, it matches the Runner sports watch, which has its own built-in GPS. The maps below show you that it manages to cover the same route but the TomTom Runner took a little longer to pick a GPS connection, hence the gap in the route. The information during the run is very easy to read in either of the display modes and the built-in backlight is bright enough to make it visible for night time runs. 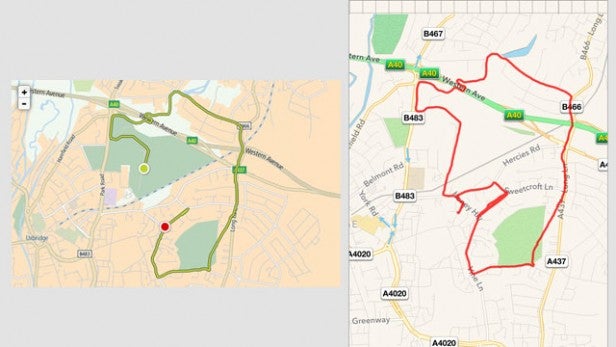 If you want to use it to track treadmill runs you’ll need to invest in a foot pod sensor so this is definitely geared towards outdoor use and is worth knowing before you invest. With a fully charged iPhone 5, the battery was barely dented in our various 30min to 1hr runs so it can go the distance even if you are puffing and panting your way to the finish line.

With the run completed, the data is logged to the app and you are back to having a watch with the time, date and weekly average, although this didn’t work for us despite logging the miles. You can receive push notifications, however there’s no built-in storage to review any post-run data on the watch because the Echo is only used to mirror the GPS information from the phone. There’s no additional features like a stopwatch, alarm or vibration alerts to make this more than a blank slate for the running apps to tap into. 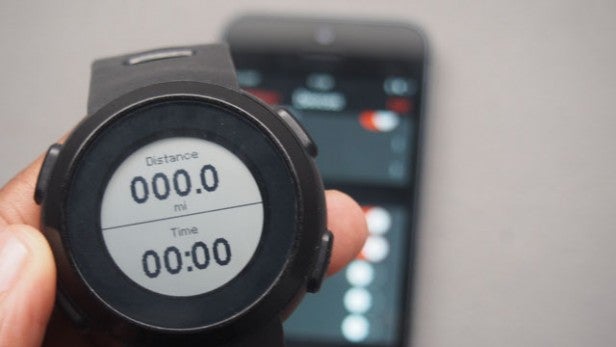 One of the biggest advantages over USB-powered running watches like the Garmin Forerunner and TomTom Runner, is that the Echo includes a replaceable CR2032 coin cell battery that’s commonly used for most digital watches and will give you 6-12 months of battery life. That’s a great deal more than GPS-packing watches that often offer a week or even less.

Should I buy the Magellan Echo?

If you run or cycle and you really hate reaching into your pocket or glancing to the armband the Echo does its job of delivering all that important information to your wrist with very little hassle. It’s nice and comfortable to wear even as an everyday watch, the screen is bright and easy to view. The battery life is better than most running watches that can cost a lot more and harnessing the GPS from a phone crucially doesn’t have a significant impact on battery life. On the other hand the lack of GPS means you will need to lug a smartphone with you at all times.

Unlike something like the Nike FuelBand SE fitness tracker, it will work with Android phones, but it’s clearly a smartwatch tailored for use with the iPhone first and foremost.

The watch itself is essentially a blank canvas with very few features on its own when not synced with a compatible app and that for us is a bit of a disappointment. We’d liked to have seen some kind of way to review data history at the very least. The increased functionality lies with the developers and whether they will choose to focus their attention on this smart running watch when there’s likely to be an influx of smart running watches from more high profile companies is up for debate.

For £130, it’s a cheaper alternative to the TomTom Runner,  Garmin’s 620 or 220 Forerunner watches and the pricey Adidas Smart Run. Bottom line, the Magellan Echo smart running watch is good at what it does, it just doesn’t blow us away.

The Magellan Echo delivers on its promise to take running data to the wrist but could do with more built-in features to use when it’s not hooked up to your smartphone.