UPDATE: When I initially reviewed macOS Sierra, I couldn’t get Auto Unlock to work with my regular Apple ID, as I was unable to turn on two-factor authentication. Since the review went live, I have found a fix for the issue and have made a note on page two to explain what I did.


What is mac OS Sierra?

Over the past few years, OS X updates have been used by Apple to blend features from its desktop and mobile operating systems. With this year’s release, the company cements the deal – OS X is dead, replaced by a more iOS-style name: macOS Sierra. It’s a change that makes sense, as it’s a name that’s been used informally for years.

A significant name change implies that bigger things are happening under the surface, although this year’s free update is one of the most modest. Sure, there’s the headline feature of Siri coming to the desktop (finally), but it’s the less flashy and in-your-face features that will provide the real benefit. In particular, the new cloud features, including a Dropbox competitor and a Universal Clipboard, are the features that I’ve found the most useful.

The downside, once again, is that, for some new features, you’ll need to have an iOS device as well. Without one, you won’t be able to use Auto Unlock or pay for goods using Apple Pay. This reliance on mobile is both one of the operating system’s strengths and annoyances, making it harder for anyone that wants to mix and match their hardware.

As with the most recent updates, macOS Sierra is a free upgrade, provided you have a compatible computer. The short story is that it supports all 2009-and-beyond MacBooks and iMacs, but you’ll need a 2010-or-newer computer if you have a MacBook Pro, MacBook Air, Mac Mini or Mac Pro.

Finally, Siri has made it to the desktop after being trapped in mobile devices since launch. A fancy new icon sits at the top-right of the desktop in the Menu Bar. You can click it to bring up Siri or press and hold Command+Space. This shortcut uses the same keys for Spotlight search, which is handy, as you don’t need to remember another command. If you do want to use something different, you can change the shortcut in System Preferences.

As on the iPhone or iPad, you then just ask Siri questions or give it commands. That means that you can do all of the standard stuff that you’re used to doing with Siri: set a reminder, launch an application, search online or ask what the weather’s going to be like. 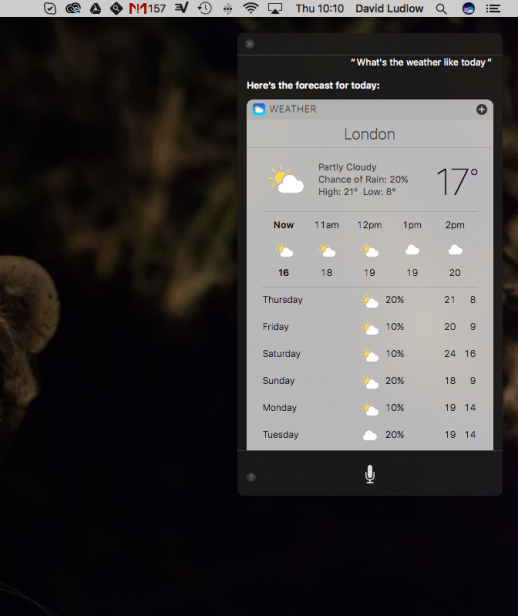 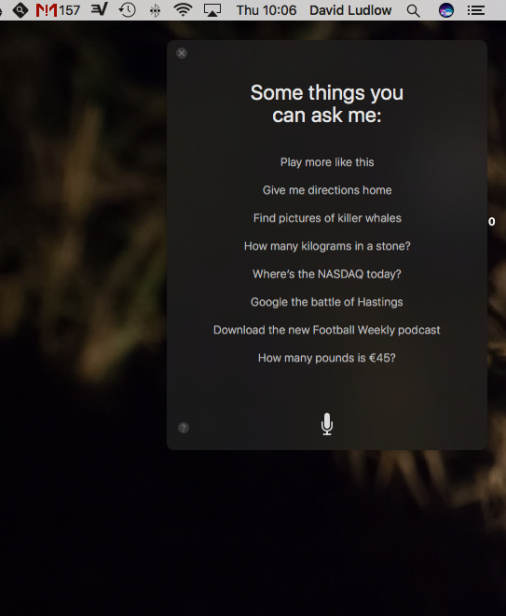 Siri is also capable of more complex tasks, such as composing an email, showing a preview in its pop-up window as you go. You can send messages directly from Siri, but clicking the preview to make a final edit to cut out dictation errors is a wise idea. Fortunately, clicking the preview opens your default email client, not the built-in Mail app. 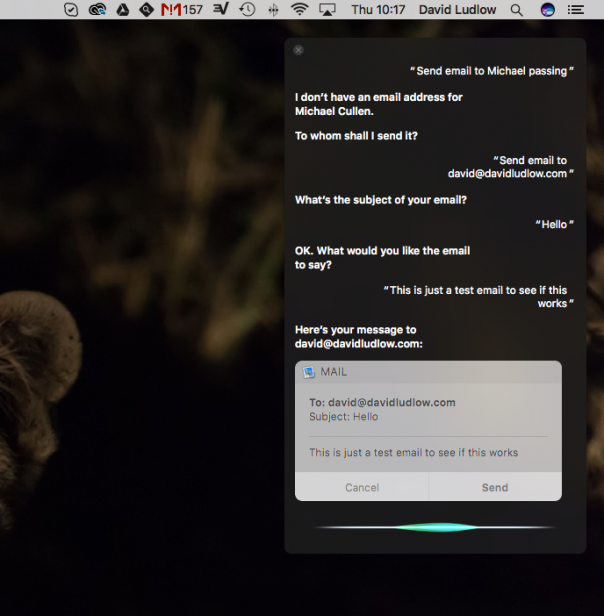 For macOS, Apple has also added some new features. Siri can tell you how much storage you’ve got left, or find all files that you’ve edited in the last week, for example. There are several limitations, though. Unlike with iOS, macOS’s Siri can’t integrate with third-party applications, so you can’t search for music in Spotify, for example. There’s also no HomeKit integration, so you’ll have to control your smart home from your mobile device instead.

Then there’s the general problem that, smart as Siri is, you soon learn its foibles and realise that you have to adjust the way you phrase to be understood. For simple tasks, such as setting a reminder, this is fine, but if you want to do anything more complicated, it’s easier to use the traditional manual methods.

I didn’t like the way that iCloud initially worked, with each cloud-enabled app automatically choosing where to save its files. With the introduction of iCloud Drive, Apple let you manually access your cloud storage, but it still wasn’t that flexible, and you couldn’t use it to organise your regular documents.

In macOS Sierra, Apple’s finally introduced a more Dropbox-style way of using the service. Now, iCloud will automatically backup and share files saved in your Documents or Desktop folders. It means that the folder structure that I’m used to just gets replicated to all of my devices. In particular, I love the Desktop iCloud integration. I’m terrible for saving files to my Desktop and then switching machines. Now, everything I put on my Desktop is available on all of my Macs. 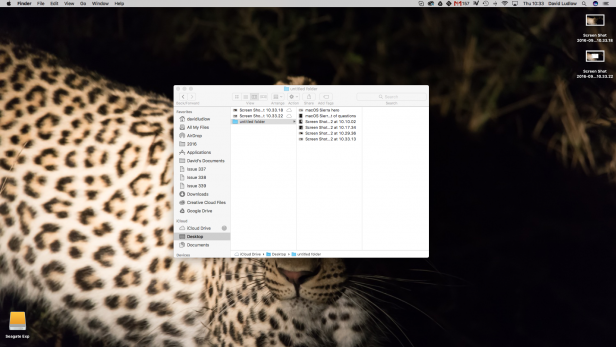 The only downside with the new system is that you can’t exclude individual files or folders; it’s an all-or-nothing option. If you’ve got a Mac packed with Documents, it can mean that you run out of iCloud storage fast.
Fortunately, competitively priced iCloud storage plans let you expand your cloud storage cheaply – 50GB for 0.79p per month, 200GB for £2.49, 1TB for £6.99 and a massive 2TB for £13.99.

Older Macs, in particular, don’t have a lot of local storage space, so macOS Sierra is here to help with Optimized Storage. Available through the iCloud System Preferences panel, Optimized Storage automatically moves files that you don’t use very often to the cloud. It can only do this for files in certain folders or apps that already use iCloud, such as Documents and Mail. 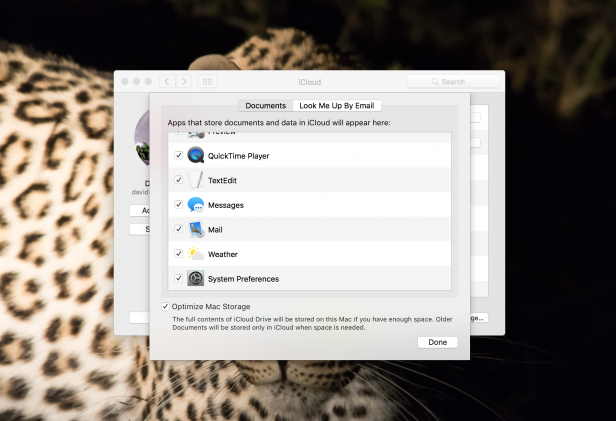 Crucially, macOS only starts moving files to the cloud when you start to run out of disk space. Data stored in the cloud is still available on your Mac, and individual files are downloaded when you want to open or edit them.
Optimized Storage is an elegant feature that can help anyone who’s got a Mac with little space left on it. Feedback from people using the service has seen them reclaim 20GB-plus of disk space, although each computer is different, and the exact amount depends on where your files are stored.