The MacBook Pro employs a 13.3-inch 2,560x 1,600-pixel Retina display. The resolution is the same as the 2015 model, but performance has been kicked up a notch, making it easily the best screen on any laptop you can buy today.

It has staggering brightness that tops out at just under 550 nits – that’s as bright as some of the best phones on the market, and until now unheard of on a laptop screen. It covers 99.9% of the sRGB colour gamut and 98.3% of the DCI-P3 cinema gamut commonly used in the video industry. 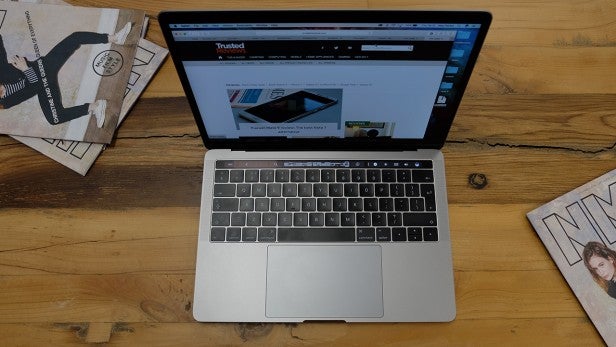 The higher the coverage, the more vibrant colours that can be displayed and the more faithful the screen is to the source material it’s showing. This is critical for professionals who need to know what their final product will look like, and it’s a “nice-to-have” for everybody else.

Like the screen, the speakers are the best you’ll find on any laptop. They’re loud, there’s plenty of bass and a huge amount of stereo separation. They’re easily good enough to enjoy music on, which is incredibly rare for a laptop.

The microphone is super-impressive too; even sitting in an office with air conditioning and co-workers chatting some distance away, the MacBook cancels out practically all background noise, delivering warm and rich voices with next to no hissing or echo. It’s better than the mic on the base model, because Apple has added an extra mic to boost quality. 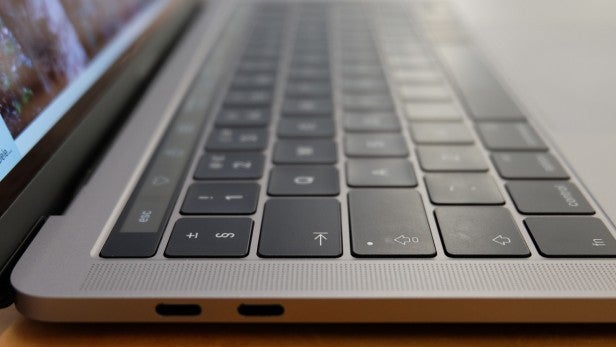 The 720p webcam is fine, but perhaps one very minor area where Apple hasn’t plumped for top-end kit. It’s okay for basic video chats and conferencing, but it isn’t going to wow anybody.

Picking a Touch Bar MacBook Pro nets you a big processor upgrade. Instead of the slightly piddly 2GHz Core i5 in the base model, you get a beefier dual-core 2.9GHz Core i5-6267U that can boost up to 3.1GHz. Despite being labelled as an i5, this chip manages similar performance to the Core i7-7500U found inside the Dell XPS 13.

This is significant, and will make a difference to video render times and overall system sprightliness. In the Geekbench 3 benchmark – the only cross-platform performance benchmark TrustedReviews currently uses – it scored 7,661 in the multi-core test. This is just a whisker behind the Dell XPS’s 7,675 and well ahead of the 2GHz model’s 6,947. 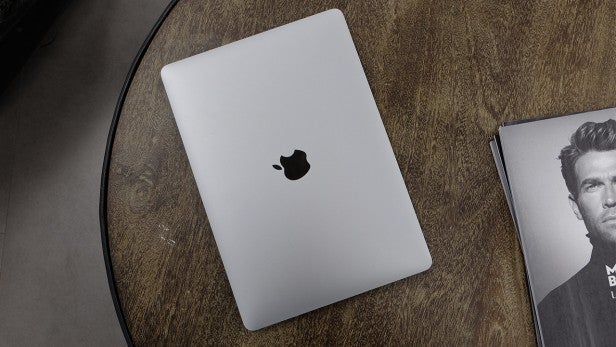 Intel Iris Graphics 550 is slightly more powerful than the 540 found in the base model, and is likely to help with video effects work. This isn’t a gaming machine, however: while some 3D games will work at lower resolutions, this laptop isn’t best used in this way. I did fire up some Football Manager, however, and had no issues.

You get 8GB of 2,133MHz RAM as standard, which is up from the 1,866MHz in the base model. I’d consider spending an extra £180 for 16GB if you’ll be editing lots of videos; you won’t be able to upgrade it after purchase.

The SSD is the fastest I’ve seen on a laptop, maxing out the CrystalDiskMark benchmark with 2,000MB/sec read speeds and 1,700MB/sec write speeds. This model comes with only 256GB of storage; Apple has chosen to separate the 512GB and 1TB models on its website, even though they appear to be functionally identical. 512GB storage costs an extra £200, while 1TB costs an eye-watering £360 on top of that.

The battery in this model is slightly smaller than the unit in the base model, and with a more powerful processor and the added strain of the Touch Bar, it’s easy to imagine the laptop faring far worse than the base model. In practice, the difference isn’t significant – although, anecdotally, other members of the team who used the MacBook Pro for the day found they were only able to squeeze just under seven hours out of it at a little over half brightness. I was able to get around eight hours at a much lower brightness. I’m comfortable with a dim screen, but many buyers might not be.

I also found the battery indicator to be less reliable than on the base model; not always providing an accurate reading. 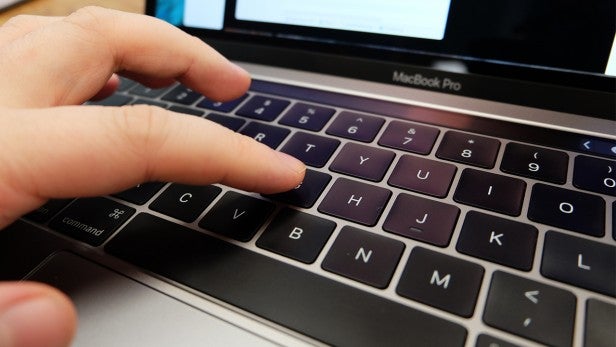 Streaming Netflix for an hour at one-third brightness, the the MacBook Pro consumed 14% of its charge, 1% more than the base model.

Should I buy the 13-inch MacBook Pro with Touch Bar?

I wasn’t convinced by the base model MacBook Pro, but the the Touch Bar model has done a good enough job to justify its high cost. Processor performance is far better than on the base model, the number of ports included is far more generous, and the Touch Bar is a bonus feature that could become essential for some.

All that, plus the same amazing build, screen, keyboard and touchpad as the base model and you have, quite simply, the best laptop on the planet right now. It doesn’t get the full five stars because I still have concerns about the awkward Thunderbolt decisions Apple has made – but make no mistake, this is the best laptop I’ve used this year.

If you’re looking to edit photos and HD video then the MacBook Pro with Touch Bar is the best option available – if you can afford it. If not, consider the Core i7 Dell XPS 13 instead.

As you’ll have seen in our long-term review on the first page, battery life inconsistencies might be a problem, but equally might not affect you at all. At worst you’re looking at a six-hour machine. With such great processing performance, I think it’s an acceptable, if slightly annoying compromise, but not everyone will agree.

Apple’s back with a bang. The MacBook Pro with Touch Bar comes close to computing perfection.