Lypertek continues to impress with its true wireless options. The SoundFree S20 pack in plenty of value with their feature set while producing a sound that bests most of their rivals – one of which are the still available Lypertek PurePlay Z3 that aren’t much more expensive.

The Lypertek Tevi came out of nowhere to surprise with their excellent sound at a wallet-friendly price. Lypertek has returned with an even cheaper proposition in the SoundFree S20 wireless earbuds.

It’s been a winding road for the SoundFree S20’s release. Initially due in autumn 2020 under the name Levi, the release fell back and the name changed to SoundFree S20 (what does SoundFree S20 actually mean?)

These earbuds are essentially smaller Tevis (or PurePlay Z3) with a cheaper price and a couple of new extra features. The budget wireless earbud market isn’t short of options, so what do the SoundFree S20 aim to bring that make them worth considering over the rest? Plenty – is the answer to that question.

The SoundFree S20 launched in February 2021 for the price of £69 / $69 / €69. The Lypertek PurePlay Z3 are still available for not much more and feature a few notable upgrades in terms of its specification.

The Lypertek SoundFree S20 – a name that will never roll off the tongue as well as Levi – are basically mini-PurePlay Z3s (another name I’ll never say with much conviction either). They have the same shape and aesthetic, but a virtue of their smaller size is a better fit and seal over the PurePlay Z3.

The bigger earbuds stay well planted, but there’s a slight looseness that isn’t felt with the SoundFree S20. The latter sit tight and plug the earhole with barely any discomfort.

Having used them on several occasions for running, they stay embedded in the ear canal very well. Another great thing about their size is that the noise-isolating design is so great, you’ll barely notice any traffic flowing past. In the package you’ll find a bevy of ear-tips, including small, medium and large tips, along with small, medium and large double-flange tips for the right fit or slightly different sound. 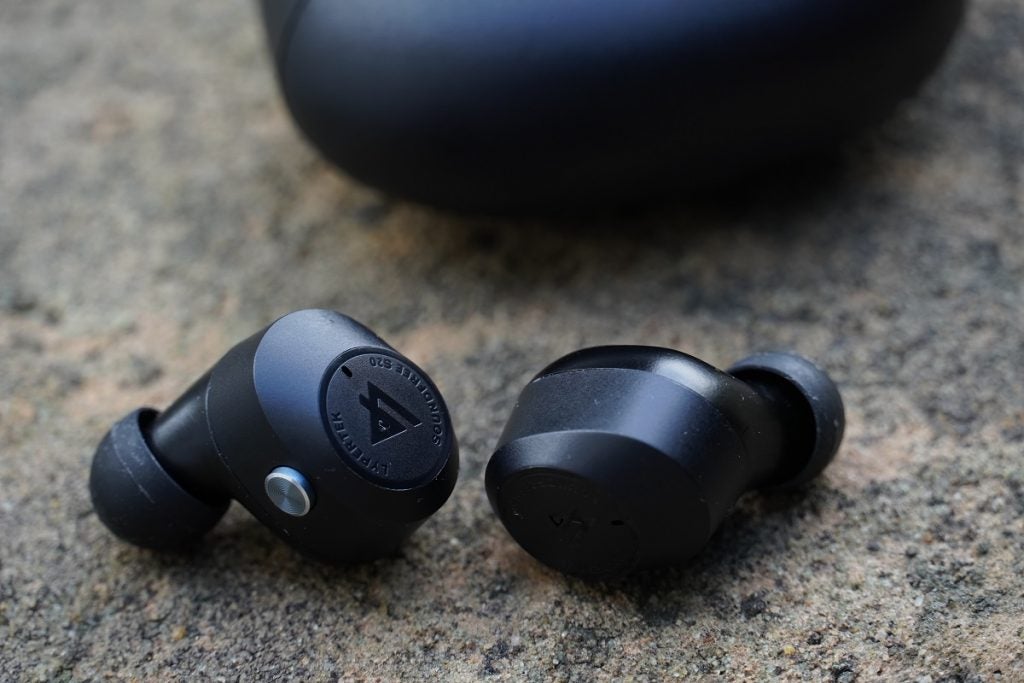 The case is just as compact as the earbuds – a little too much for my big hands. The space-saving design means they’re easily pocketable, but trying to get them out feels like I’m trying to clawing at them. On the front of the case is an LED indicator that displays the charge remaining, while the underside is home to a USB-C connection for charging.

One area that the SoundFree S20 deviate from the PurePlay Z3 textbook is their interface. They still use tactile buttons, but instead of a spherical contact plate the S20s feature buttons on the side of each earbud. Considering the struggles that cheaper wireless earbuds can have with touch controls, this feels like a novel change. It’s a boon to those – whoever you are – who don’t like to push earbuds in.

It also makes the earbuds super-easy to operate: a tap to stop/start audio, two to skip tracks, and three to activate transparency mode; a long press on either earbud sends volume up or down. After a while, it will become natural. It even helps when running, as you can put your thumb to the back of your ear for support and press down on the button to make certain of the press.

The SoundFree S20s are currently available in a matte black finish, which looks functional at best. Hopefully, like the PurePlay Z3, a more distinctive finish is in the pipeline.

There’s been an uptick in cheaper wireless earbuds packing in more advanced features to offer even more value, and the SoundFree S20 choose a similar path.

Compared to the PurePlay Z3, battery life is reduced – but it’s still a whopping 40 hours all told (eight hours in the earbuds, 40 in the case). Lypertek bases that figure on 50% volume with the SBC codec, so there’s certainly room for differing figures depending on use.

I’ve found the S20s churn through the battery quicker than the quoted life, especially if you’re flitting between ‘normal’ and transparency mode, or listening at a higher volume. Forty hours sounds like the best-case scenario, but it’s likely to be less. Fast-charging is supported, with 15 minutes enough for two more hours; plus the case also supports wireless charging, if you have a Qi plate. 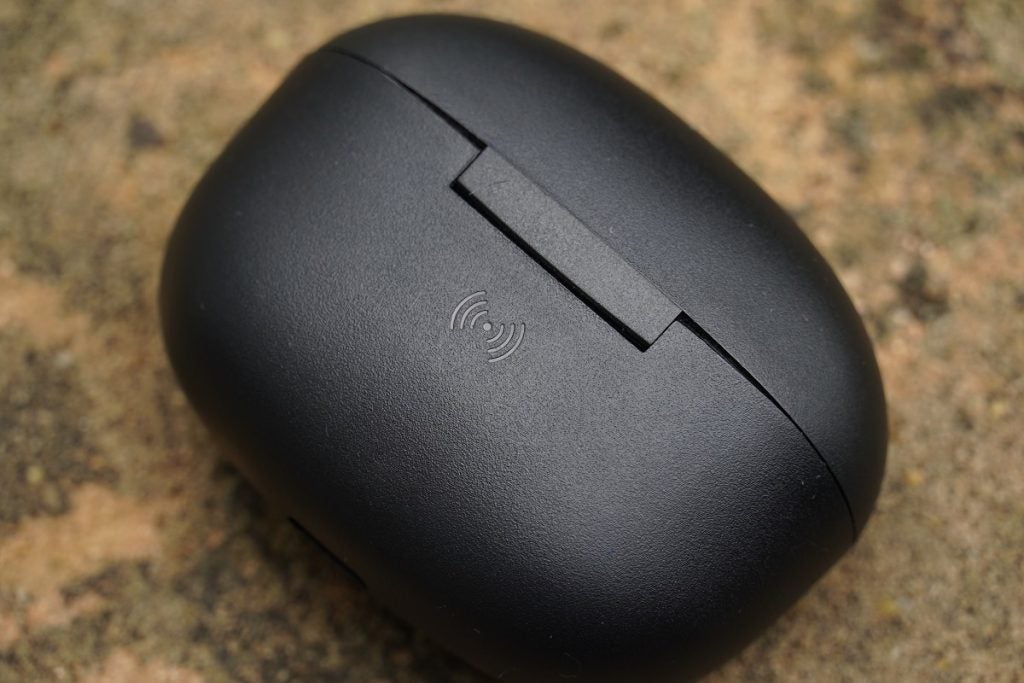 One useful aspect about the delayed release of these earbuds was that it allowed Lypertek to fix an issue with the Levi, namely a hissing sound when they were placed in the charging cradle. Given there’s no companion app to serve updates to, I’d imagine this would have been hard to rectify if the original went to market.

Like the Panasonic RZ-S300 and Urbanista London, the Lypertek SoundFree S20 have adopted the Ambient Sound Mode feature. Three quick presses sends the earbuds into this mode, and given the SoundFree S20’s preternatural noise-isolating abilities, enabling this offers more awareness of what’s around. It does sound a little unnatural, though, with a slight feel of a rattling air conditioner about them as vehicles go by.

Other features are pretty typical. They’re waterproof up to IPX5; and the Bluetooth 5.0 connection has proven to be reliable with only a few hints of connection breakdown. There’s no aptX, so the SoundFree S20 make do with SBC and AAC. This isn’t necessarily a big loss – but given the PurePlay Z3 support it, and they’re not much more expensive, it’s one of a few defining differences between them.

I waxed lyrical about the Tevi/PurePlay z3’s audio quality. The SoundFree S20 don’t quite repeat the trick – the PurePlay Z3 still sound better overall – but the tuning of the S20 impresses in other ways.

Like the design, you can determine that both the Z3 and S20 are from the same family of headphones in the way that they sound – but the S20 boast smaller 6mm dynamic drivers that emphasise parts of the frequency range that the Z3 don’t.

Bass is one such area, and the S20 display a greater sense of punchiness in New Masters/Keyon Harrold’s reworking of Childish Gambino’s This is America. There’s also plenty of versatility; they’re able to showcase the different types of bass in Herculean’s The Good, the Bad & the Queen to Flying Lotus’ Parisian Goldfish.

There’s also plenty of power, since the S20 barrel through Tom Holkenborg’s Wonder Woman – A Call to Stand/A World Awakened from Zack Synder’s Justice League. That energy gives them a sense of propulsion with fast, pacy tracks, and when married with that bass, the results are unsurprisingly entertaining. 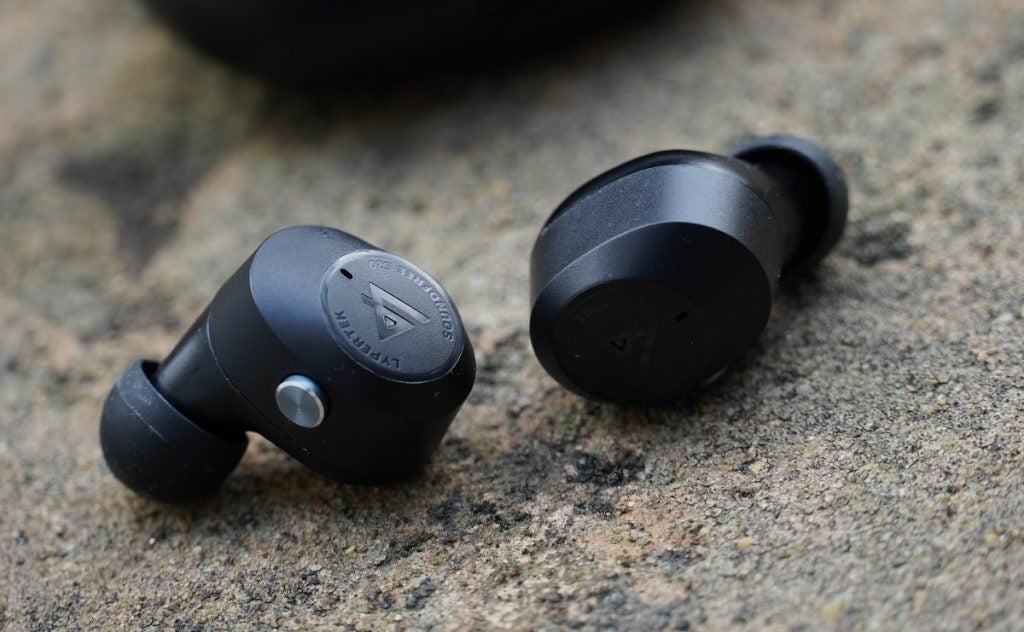 Play Whiplash from the Whiplash soundtrack and the S20 display a good sense of free-flowing rhythm, clarity and tempo. Tonally they’re balanced across the frequency range, so while the low-end is emphasised, it isn’t at the expense of the mid-range or treble.

Vocals are well described for the most part, given clarity and space without being encumbered by other elements in a track. The mid-range sounds natural enough that instruments appear like they should, and that you can tell the difference between an actual instrument and something electronic. It avoids the pitfall that some cheap true wireless stumble into, where they apply the same tone across a range of music genres.

Dynamically, the SoundFree S20 navigate the peaks and troughs of songs better than most budget true wireless earbuds I’ve listened to, and treble reproduction is sharp enough to have an impact in the Cloud Atlas soundtrack’s Kesselring, where other earbuds can so often have it dulled. 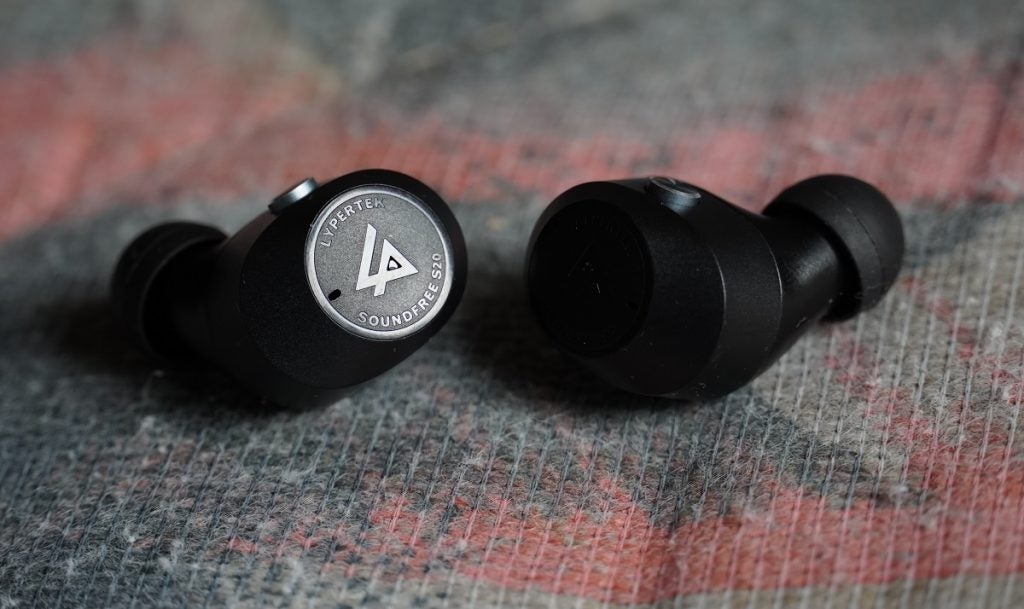 However, the biggest issue the S20 have is the Z3. Comparatively, the Z3s offer a wider, spacious soundstage. As good as the S20 handle vocals, there are trace elements of sibilance in rap and hip hop tracks – less than some others, but still evident. The S20’s powers with stereo imaging are flatter than the Z3, and they don’t summon as much detail from the mid-range and nor do they communicate as much raw power in Tom Morello’s cover of Voodoo Child.

But that takes little away from the SoundFree S20. Considering the price – a snip at £69 – the S20 are another highly entertaining pair of true wireless earbuds from Lypertek. The brand is making a name for itself as the option for cheap true wireless excellence.

The biggest issue the SoundFree S20 have is that the PurePlay Z3 are still around. They sound better and aren’t much more expensive.

But the S20 have their own virtues that mark them out as different enough from the Z3. The fit is excellent, their punchiness makes them great for bassy tracks, and the overall value the deliver is tremendous. They’re not quite as good as the Z3, but impressive in the ways that count.