Available on iOS (tested) and PC

Most puzzle games don’t come with a step-by-step manual telling you how to solve almost every physical quandary that blocks your path, but Lumino City – the product of a small studio, State of Play Games, based in London – not only gives you the answers to a large portion of all of the questions it poses, but it does so in an especially elegant way.

Said manual is actually a guide written by your Grandfather, who mysteriously disappears at the start of the game after revealing he has something of utmost importance to tell you. It’s then that you set out on a quest through Lumino City in order to find him, turning to his manual at almost every turn in order to open up the path ahead. It’s not superficial to suggest that all this plays second fiddle to just how Lumino City looks, however. 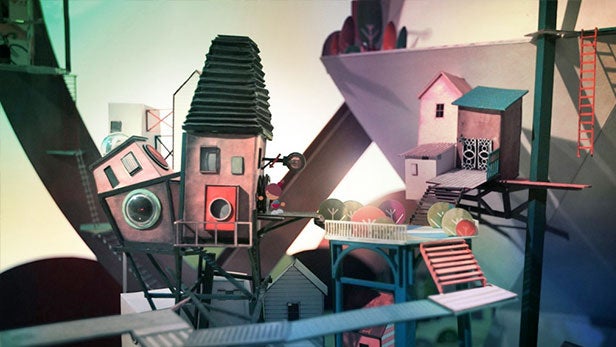 Rather than simply animating the city’s 3D world in standard fashion, developer State of Play took the bold (and no doubt time consuming) decision to use real, physical objects in its world. Lumino City is the product of cardboard cut outs, photographed from multiple angles and then pieced together to create an environment that, on an iPad’s Retina display, looks as if it was actually laid out on the table in front of you. So real does Lumino City’s paper crafted world appear that it actually takes a while before you realise that you can actually interact with most of the people and objects in your path.

Such interaction is actually key to your progress, with the game’s ‘tap and see’ approach to pay essentially fitting into the point-and-click mould. Much like The Room, Lumino City throws a few related problems in the melting pot and tasks you with solving them before then opening up the level ahead and, as you might expect, putting a few more puzzles in your way. Most of these puzzles are physical, with the odd NPC popping up to push you in the right direction. 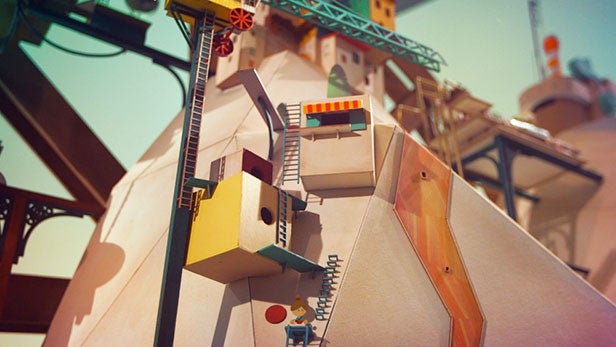 As an example, the first block to your progress is a city wide power cut, where using lemons to rewire the city’s switchboard is the order of the day. Soon after that you’ll find yourself re-sticking hazard warning labels to a series of chemicals in order to develop some photos, with each task revolving around finding the right page in the game’s massive manual in order to crack the code in front of you – if you can’t solve it yourself.

It’s the level of detail in this manual that really helps illustrate the care and attention that’s gone into the making of Lumino City. Pages and pages of information contained within are mere filler, designed to give the manual a context beyond simply serving as a cheat sheet, but so detailed are the diagrams contained within that the mind boggles as to just how long State of Play spent working on it. None of it feels surplus to requirements, however: the world Lumino City’s puzzles sit in feels as important as the puzzles themselves. 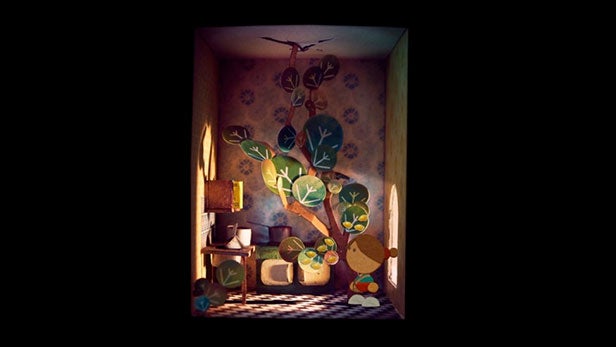 Nevertheless, there remains a feeling that a lot of the appeal of Lumino City stems around the unique look the game has and the quirky way in which it delivers its puzzles. Though it all serves as a sign of the talent that’s gone into its design, play remains a touch undermined by a feeling that in pure gameplay terms, it’s all a little bit too light to truly challenge anything beyond a casual audience. Like the mobile equivalent of nuvo cuisine, everything contained within is especially delicate and beautifully presented, but there’s nevertheless a feeling that Lumino City could do with a bit more meat on its bones.

Regardless, few games go the lengths Lumino City does of ensuring that its puzzle based play is delivered with quite such care and attention. Lumino City feels very much like a labour of love on the developer’s part, and while critics may claim it fails to offer a degree of difficulty that its environment deserves, it would be churlish not to admit that it’s an absolute pleasure to play around in State of Play’s wonderfully weird and wacky world.

Verdict
Bolstered by an attention to detail that few games can match, Lumino City’s paper crafted world may not have the most testing puzzles, but it delivers them with such style that it’s very easy to find yourself melting into its environment, breezing through its puzzles without pausing all too much for breath. Not the most testing point-and-click adventure, then, but definitely one of the most alluring.