14 years ago Lumines was a game riding right on the zeitgeist. A launch title for the PSP at the time when a portable PlayStation seemed incredibly exciting, it was a great example of gaming culture mixing with the wider culture, bringing the sights and sounds of the clubs to what seemed a simple block-matching puzzle game. This was also a time when we as critics loved to wax lyrical about concepts of synaesthesia, where music, visuals and gameplay came together in one overwhelming multi-sensory experience. Q Entertainment’s Tetsuya Mizuguchi was – and is – the leading proponent of this kind of thing, through Rez, this game and later Child of Eden.

These days Lumines seems, well, a little of its time. Even remastered in HD, the visuals aren’t quite as dazzling as they once were. The music can sound dated, like the sort of thing you might hear at a noughties nostalgia night in a superclub where the buzz died down many years ago. Lumines has crossed over from the point where it defined gaming’s future to one where it has more to say about the past. But, do you know what? It doesn’t matter. It’s still an astonishing experience. It’s still one of the all-time-great puzzle games.

On first impressions, it seems pretty simple. Square blocks of two colours descend slowly from the top of the screen in square clumps of four. You can move the falling block left or right or rotate it, or accelerate its descent. The blocks eventually fall to the floor or land on top of other blocks, the clumps splitting when they do. When the blocks of one colour form a square or rectangular clump it disappears, adding to your score and creating more space for new blocks to drop. Your job is to keep moving and rotating the falling blocks so that this happens, and so that you can keep on playing. 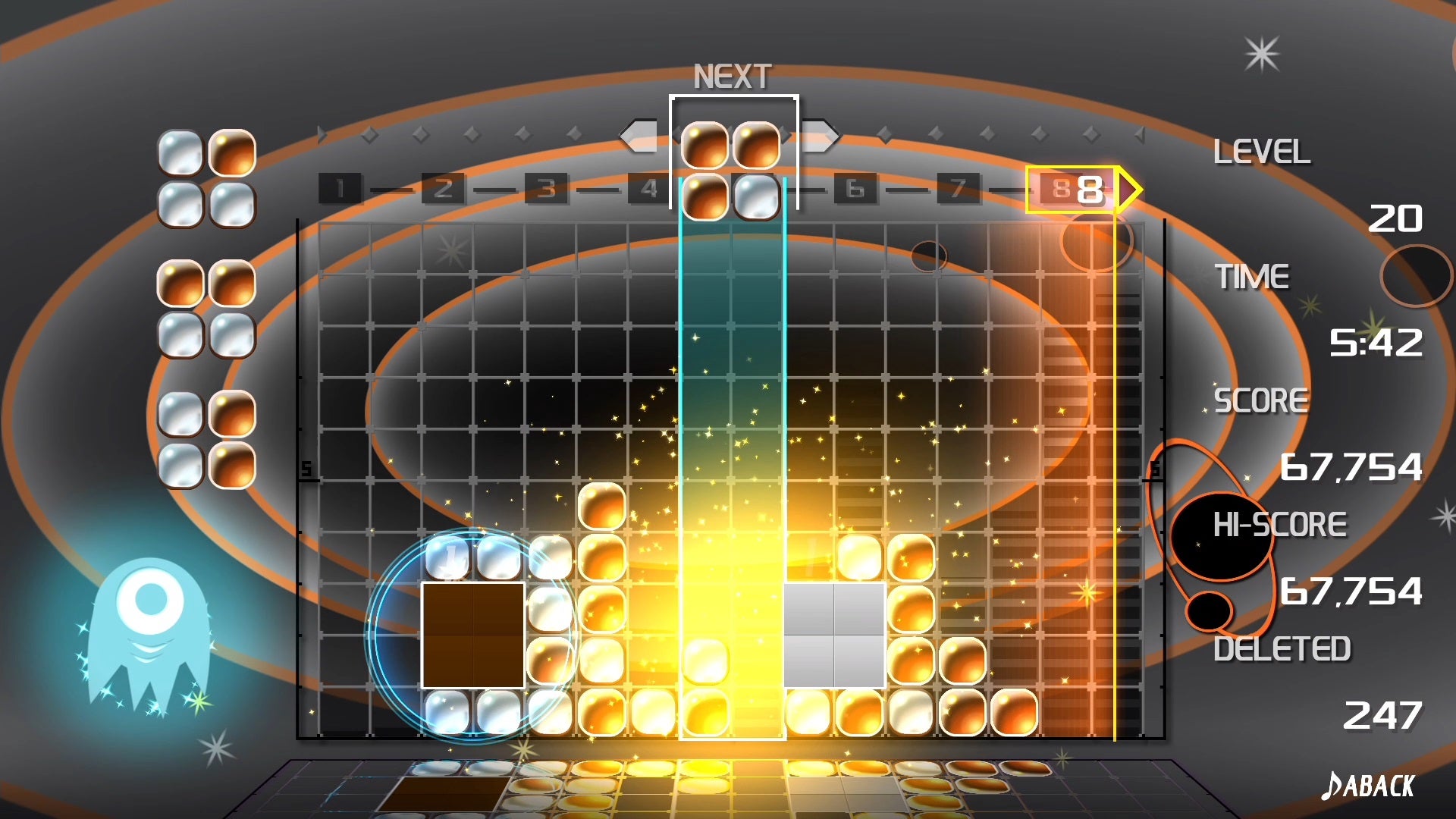 None of this was new even back in 2004, but Lumines messes with the formula in some interesting ways. The game is staged through a series of skins, each with its own colour scheme, background graphics, visual flourishes, and soundtrack. These skins merge from one to another when you hit a certain score. What’s more, stacked blocks don’t disappear as soon as they connect; you have to wait while a bar, travelling left-to-right in time with the beat, runs over the blocks in question. This makes timing important – a fact the game plays with by tying the effects in with the music so that Lumines sometimes feels like a rhythm action game.

Finally, every now and then the game throws in a special sparkling block. This activates and deletes all connected blocks of the same colour, which can be an absolute lifesaver when the playfield is nearly full but you have strings of same-coloured blocks running through your stacks.

In action, it’s a bit like playing a Tetris clone with psychedelic visuals in the middle of a really loud club, not least because the game is simultaneously deafening you with the pounding soundtrack, blinding you with the flashing, strobing graphics and jolting you out of your comfort zone with some of the most excessive rumble sensations of any game ever; seriously, on the Switch those Joy-Cons kick like a mule. But I’m not saying this is a bad thing. Playing Lumines: Remastered feels great. 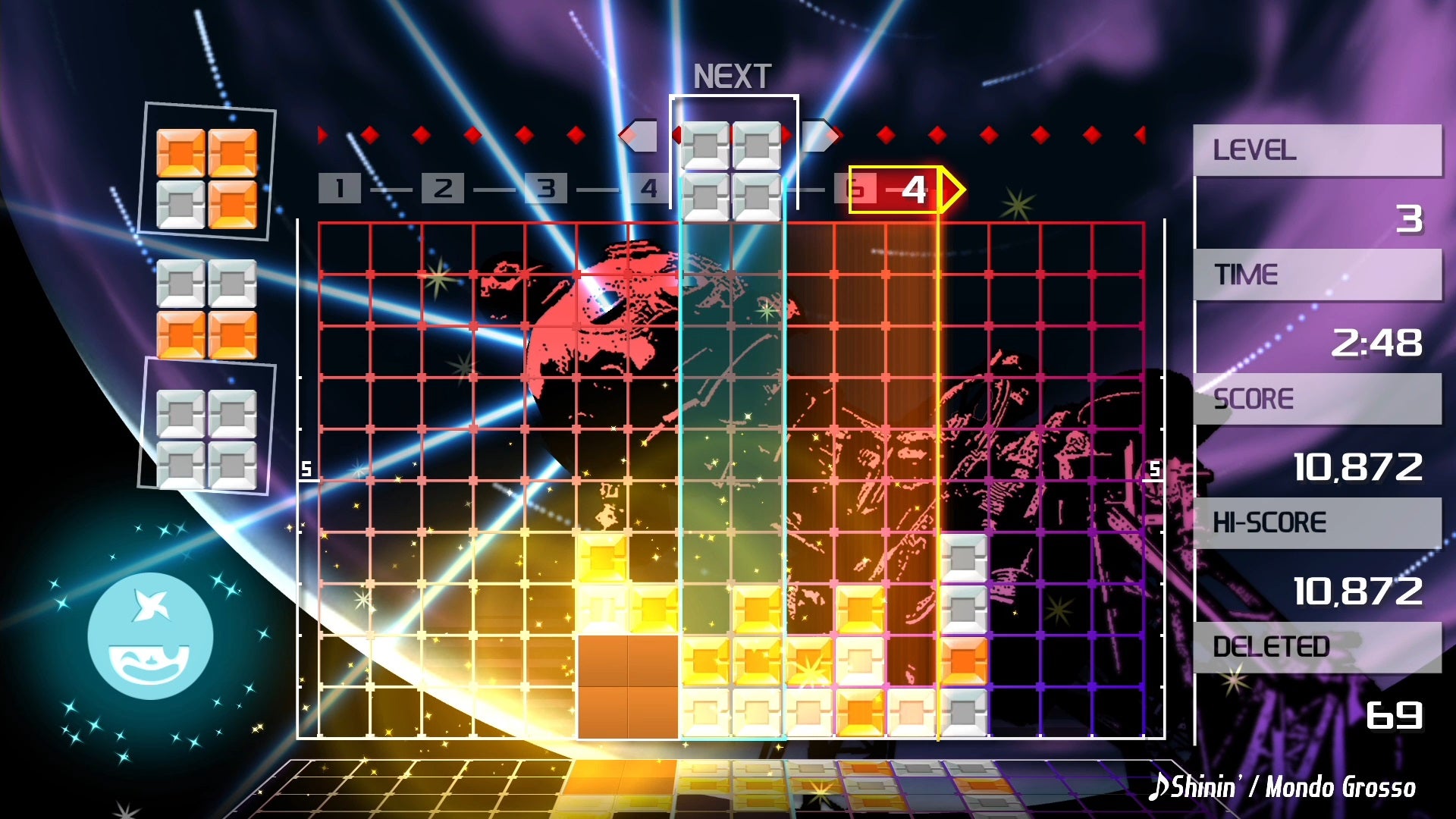 Honestly, there’s something in the ever-increasing pace of the gameplay and the steady building up of the challenge that just works. It’s one of those games that asks you to get in the zone and stay there so that you end up in some sort of weird trance rotating, moving and aligning blocks on some subconscious level without even really thinking. As the stacks rise and threaten to reach the top of the screen – game over – panic starts to set in, but if you’re smart you’ll master the feeling and stay focused on matching and removing blocks.

And it’s stupidly, even embarrassingly addictive. You’re always just on the cusp of unlocking a new skin and a new track or hitting a new high score, so it’s very, very hard to put the damn thing down. As games grow to take in fifteen, twenty and close to thirty minutes, you’ll still find yourself pushing for just one more go. Seriously, don’t even pick it up late in the evening. It’ll be midnight, then 1am, then 2am before you know it – and when you do try to sleep all you’ll hear is the music; all you’ll see is those falling blocks.

The main Challenge mode is the primary draw here, but it’s not ideal for bite-sized sessions or playing on the move. This is where Lumines Remastered kicks in with all the secondary modes Lumines has accumulated over the years. You can DJ your own custom sequences of tracks and skins to play through or get the game to shuffle a selection. There’s a Time Attack mode that challenges you to get rid of as many blocks as possible in a period of thirty seconds to five minutes, plus a Puzzle mode where you just need to arrange the falling blocks so that they form a certain shape. The puzzles are surprisingly tough, and the mode surprisingly addictive. 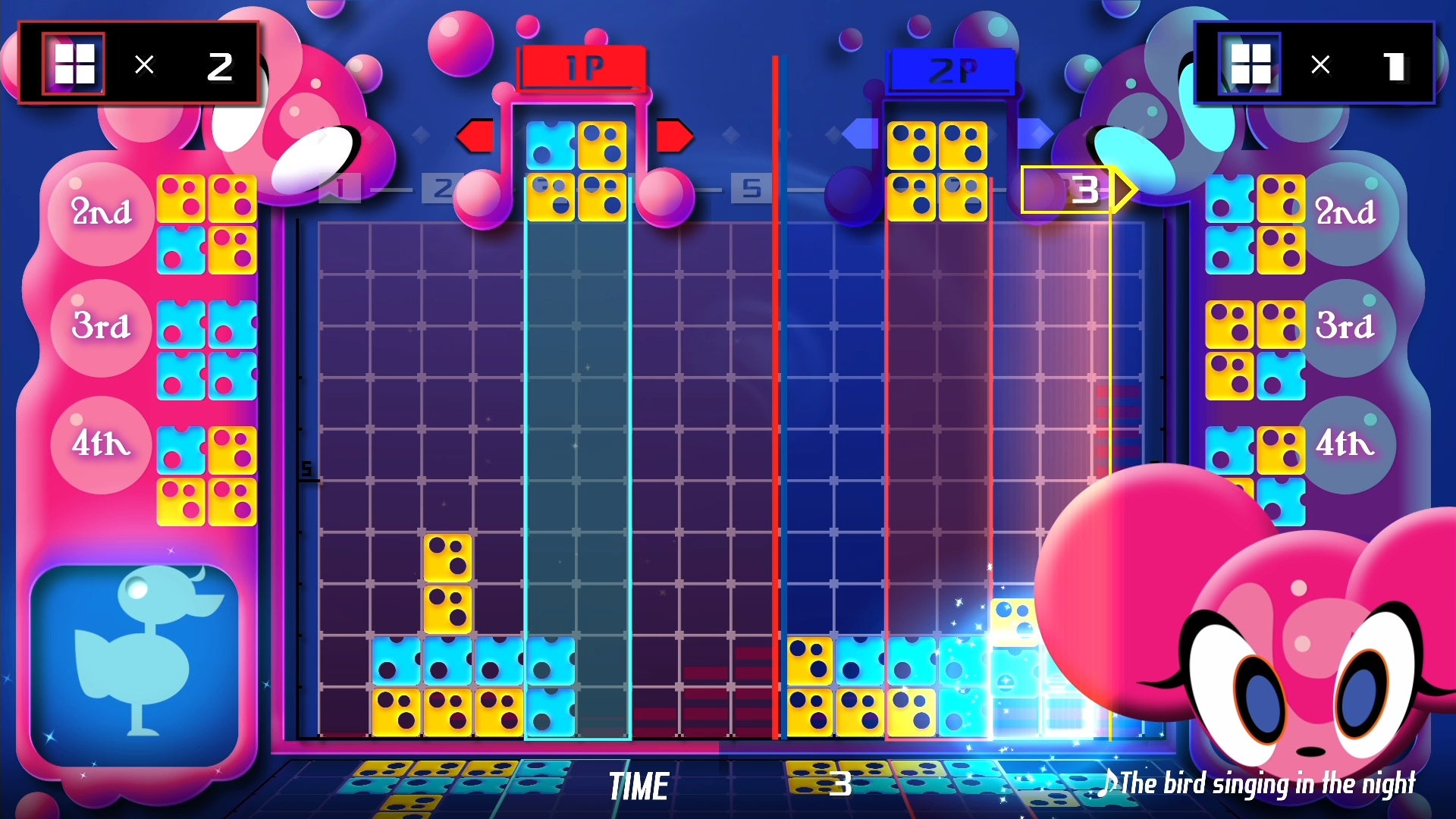 Only one mode falls ever so slightly flat, and that’s the new Versus mode, which pits you against a series of CPU characters or another local player. Here the game splits the view so that you have the left-hand-side of the playfield and your opponent has the right. The better you play, the more the split moves to the left or to the right, diminishing the area you have to use and increasing the speed at which the stacks grow upwards.

This results in short but very intense matches but makes it very difficult to claw back the game once you start losing – or at least without dropping blocks into position at inhuman speeds. You can keep on playing and keep on winning, but victory seems more a case of lucky blocks than awesome skills; get the game moving in your direction early, and you’ve got a better chance of your opponent getting squeezed out.

Does Remastered bring anything else to the Lumines experience? Well, there’s a shuffle mode where you can play through unlocked skins in a random order, along with a whole selection of new skins that we haven’t seen before. Online leaderboards are very much a thing, though online multiplayer still, sadly, isn’t. Switch owners also get a weird Trance Vibration setting, where you can sync an extra pair of Joy-Con controllers, stick them in a pocket and enjoy an extra rumble every time the bass notes hit. Personally, I’m not a huge fan, but if you’re looking for total immersion turn the sound right up, the lights right down and away you go.

A solid HD/4K update of a solid-gold classic puzzle game. Lumines Remastered doesn’t transform the Lumines experience and not all the new additions work out for the best, but who cares when the core game is still so fantastic and the overall audio-visual-sensory impact is so powerful? While we’d love to see an all-new sequel with brand-new skins and tracks, it’s good to see Lumines back in action.