Having made its debut at the launch of the PSP, it’s only fitting that Lumines should be one of the strongest launch titles on PlayStation Vita. In the intervening period, Testuya Mizuguchi’s trippy, musically enhanced puzzler has found its way onto nearly every system going, from the Xbox 360 (through Xbox Live Arcade) to the iPhone, but there’s something about playing it on Vita that just feels right. What’s more, while the basic gameplay remains virtually unchanged, this version of Lumines uses Vita’s high-resolution screen and considerable graphics capabilities to make it the most visually intense incarnation yet, with a storming soundtrack to match

.
If you’ve never played Lumines, you might feel underwhelmed that it’s actually a fairly simple block puzzle game. Square clusters of four blocks rain from the top of the screen and pile up on the bottom, Tetris-style, and you can shift them left or right or rotate them before they hit ground. The clusters fragment when they hit an uneven portion of the pile, so if you have a one-wide tower or one-wide crevice, blocks will remain on or slot into it, leaving the remains of the cluster to fall to one side. Each individual block has one of two colours, and when four or more blocks of the same colour connect in a square or rectangle, the block disappears and you get points. However, this only happens when a scan line, which patrols from left to right across the screen, runs across them. Occasionally special blocks appear that cause adjacent blocks to disappear, and you get extra points for getting rid of larger shapes or losing several clusters in one sweep of the scanline. If the pile of blocks reaches the top of the screen, you’re off to the quit or retry screen. That’s basically it. 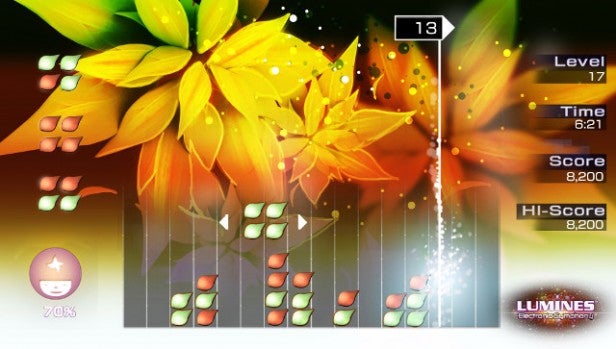 Except it isn’t. Lumines is divided into sections, known as ‘skins’, and each skin has its own tune, its own visual style and its own speed for moving the scanline. On the one hand, this means that every skin has its own look and feel, varying between intense visuals with pounding dancefloor anthems  to more blissed out styles with mellow, ambient tracks. On the other, it means that each skin asks you to subtly adjust your style of play. A slower scanline, for example, gives you more opportunity to build up high scores, but the blocks won’t disappear as fast, making the business of piling up large clusters riskier.

But what really matters is the way Lumines uses the convergence of vision, sound and gameplay to create a powerful, almost psychological effect. In each skin, the sound effects are cleverly keyed into the music, giving you the feeling that your participation in the experience somehow goes beyond just playing a game. The visuals are deliberately trippy, echoing the music with ambient, psychedelic effects or harsh colours and bold shapes. Most importantly, to play Lumines successfully you have to get into its zone, to the extent that you forget about conscious block placements and start working on some weird subconscious level. The more you play Lumines the better you seem to get at playing it, but you might be hard pushed to say exactly why.

All of this has been true of Lumines since its PSP debut, so what does this new Vita version bring to the table? Well, it’s not just a case of play modes, though the game features variants where you simply aim for the highest score in the time available, duel over an ad-hoc wireless network with another player nearby, or set up a playlist of your favourite skins. Instead, the changes come down to controls, an interesting experience system, and the way the power of PS Vita enhances the game’s hypnotic appeal.

The controls bit is easy. On the PSP or Xbox 360 you moved the falling clusters with the D-pad or analogue stick and rotated them with the buttons, while on smartphone platforms you could drag the clusters with a finger and rotate them with a tap. On Vita you can opt for either option, and both have their advantages. Personally, we’d go for the old-school controls every time, but the touch controls are arguably faster and more intuitive if you haven’t played the game before. 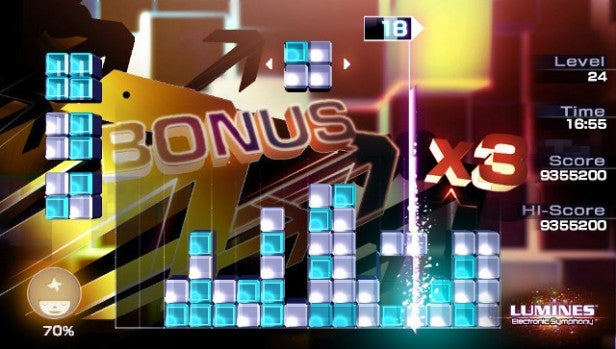 And experience? Well, every time you play Lumines: Electronic Symphony you earn experience. Earn enough experience and you rise up a level, unlocking new skins to play on in duel or playlist mode, and new avatars to play with. These avatars – peculiar animal critters – each have a special power, usually involving an ability to change the configuration of the oncoming blocks. Tap the avatar’s icon in the corner and this  power is unleashed. It’s not a huge thing, but the draw of levelling and unlocking new skins and new avatars gives you more in the way of long-term goals, and it’s not as if Lumines wasn’t ludicrously addictive to begin with. 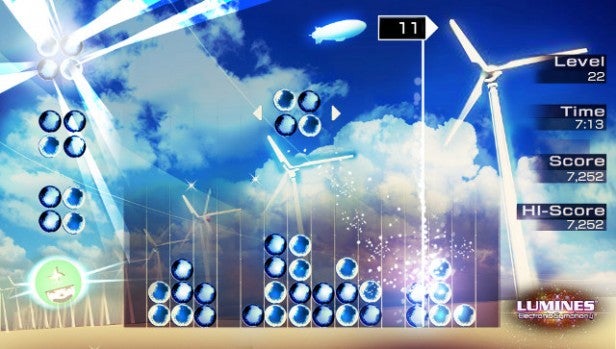 But what elevates Lumines: Electronic Symphony to greatness is that it takes the audio/visual experience of the game one step beyond. A killer soundtrack, featuring a rich variety of tracks from the likes of LCD Soundsystem, Orbital, Mylo, The Chemical Brothers, Benny Benassi, Air and Goldfrapp certainly helps, but the revamped visuals use 3D models instead of 2D blocks, with more sophisticated plasma and particle or video effects in the background, and basically a whole mass of eye-candy everywhere you look. Put on some decent headphones, turn up the volume, and Lumines: Electronic Symphony is as powerful a fusion of music, graphics and gameplay as you would wish for. You keep playing not just because you want to better that high score or hit the next level, but because you simply can’t wait to see and hear what’s coming next. 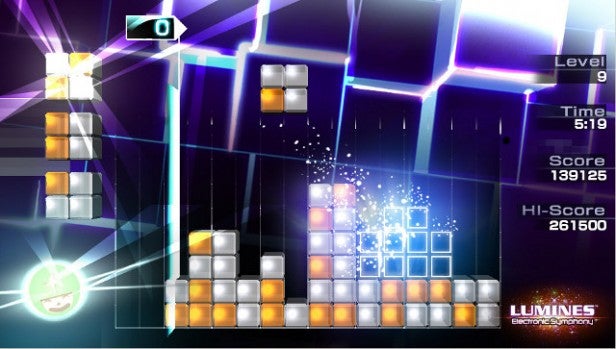 The danger with any game like this is that it gets compared to other block puzzle games available on smartphones or download services at a fraction of the price, and at £30 Lumines: Electronic Symphony feels a little pricey. On balance, though, the comparison just isn’t fair. Think about the 30 skins, the soundtrack and the level of artistry that has gone into the latest Lumines and it’s anything but another block puzzle game. It’s one of the best – if not the best – things on Vita, and a fantastic game by any standards.

Verdict
It might sound like a simple Tetris clone, but Lumines is a dazzling collision of light, sound and gameplay, with a brilliant soundtrack, awesome trippy visuals and tight, well-polished game mechanics. It’s one of the best launch titles on Vita and one of the finest action-puzzle games ever made.