Don’t listen to the non-believers – the fools who will tell you that Lumines is just another Tetris clone. They might have a point, but they’re entirely missing THE point. This is a Tetsuya Mizuguchi production, and like his previous game, Rez, there is more to Lumines than first appears. Like Rez, it takes a fairly standard format – for Rez it was the 3D shoot-em-up, here it’s the block-puzzle game – then fuses it with a stunning mixture of cool dance music, psychedelic visuals and hypnotic gameplay. In other words, this is this is not just a game, but an experience. 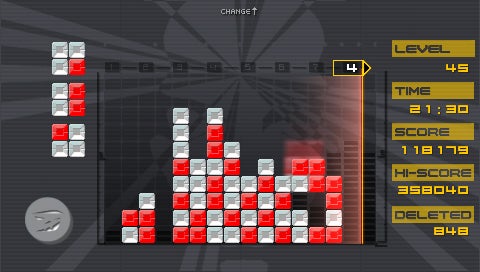 Please don’t let that put you off. I know that in the gaming equivalent of Pseud’s Corner, Lumines is already being spoken of as if someone has taken an installation from the Institute of Contemporary Arts and relocated it to an exclusive East-London nightspot so that the would-be DJs of Hoxton can dance around it and stroke their chins excitedly. However, Lumines really is for anyone with a PSP. You don’t need to look up Synaesthesia in the dictionary to enjoy it – just play it, and you won’t be able to stop.


Let’s not fool ourselves that the gameplay is really anything revolutionary. Two-by-two blocks fall from the top of the screen in various two-colour combinations. Arrange these into square or rectangular blocks of a single colour, and they disappear. By vanquishing larger chunks or chaining together sequences, you get a larger score. Should the blocks pile up over the top of the screen, it’s game over time. As with Tetris, then, the aim is to stay in the game as long as possible, while racking up as many points as you can. 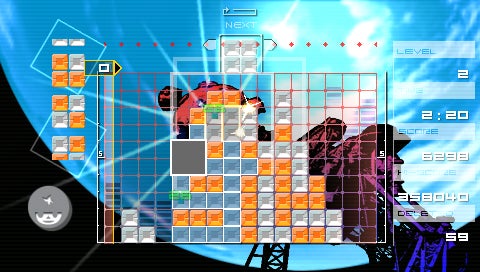 Except that isn’t quite all. Part of the draw of Lumines is the way it mixes its puzzle gameplay with a distinctive audio-visual presentation. Each ‘stage’ of the game has its own ‘skin’; a combination of music track, colour palette, background graphic, visual effects and spot sound effects, all tied together in a gorgeous whole. What’s more, the music actually affects the action. For one thing, blocks don’t disappear until a timeline, chained in to the pulse of the tune, crosses their path. Once you discover this, you can use it to shift larger chunks or chain together higher-scoring combos. For another, the sound effects caused by your drops and vanishings key in with the soundtrack. As you play, the noises you make become part of the tune.

Now, I wouldn’t suggest that Lumines is a music-making title, but it is a game where interacting with the audio-field is as much a part of the overall experience as your interaction with the game onscreen. The game’s genius is the way it all meshes together – the soundtrack pulsing in the background, the hypnotic visuals behind the blocks, and the intense, concentrated, demanding gameplay – to form something you just can’t tear yourself away from. Like any puzzle game worth its salt, the lure of the high-score table is enough to keep you going, but Lumines gives you a more concrete reason to continue. You want to open up the next skin, hear the next track, and see what additional wonders Mizuguchi and his team have come up with. 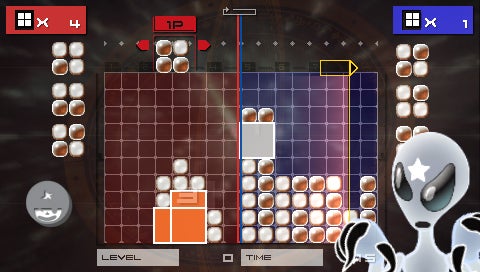 But even that’s not all – Lumines also plays a mean competitive game. Hook up against another PSP overWiFi (or a computer player if you’re on your tod) and the screen splits in two. As you vanish blocks or chain combos, your portion of the screen grows and your opponent’s shrinks – a mechanism that makes for a curiously visceral two-player contest that plays better than anything similar since Capcom’s Super Puzzle Fighter. As the versus mode has its own bizarre skins, it feels less like a bolt-on option, more an integral part of the whole Lumines experience. 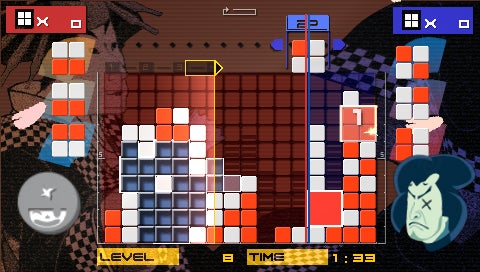 My only major concern about this one – and you can appreciate how nitpicky this is – is that the arrangement of skins in the main challenge mode could mean that you soon get bored of the initial sequence and get sick of the first two tracks. To be brutally honest, Lumines is practically begging for a track-shuffle option. Luckily, the game gives you the option of playing on individual skins once you have unlocked them. What’s more, it even features a unique puzzle mode, where the aim changes from clumping blocks together to creating a particular colour formation. In the unlikely event that the main game wears thin, this will still keep you amused for a good few hours.

Perhaps Lumines works so well because it combines a creative vision and the technology of its host platform in a way few games of any type seem to manage. Where the graphics in other puzzle games seem simplistic, in Lumines they just seem stylised; the shaded blocks complemented by the abstract waves and patterns emerging from the background. The streaming music and lush colours would be unthinkable on any other handheld platform, and the gameplay is as well suited to a half-hour bus journey as it is to a longer session on the sofa back home. Believe me – I’ve played it for two hours on the trot and hardly noticed the time going by. 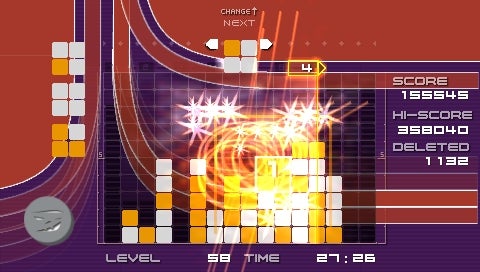 I know what some of you are saying: “I bought a PSP to play Ridge Racer and WipEout, not to waste time on a stupid, puffed-up puzzle game.” All I can say is that you’re missing out. It’s hard to argue with that awesome racing twosome, and if you just want to impress your mates then they are the ones to do it. But if I had to pick a third PSP launch title, then this is the one that I’d go for. It might not have the same visual impact or sense of technical virtuosity, but it’s the one I can’t stop playing. No matter how high that high-score goes, it never seems quite high enough. 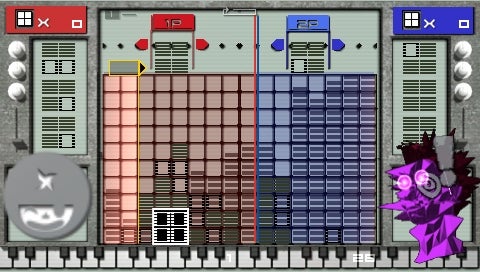 ”’Verdict”’ A hypnotic audio-visual experience AND a fiendishly addictive puzzle game. Don’t leave Lumines to the chin-stroking brigade – it’s far too much fun for that.