Poor Luigi has always had to play second-fiddle to you-know-who. Even when he had a chance at his own starring role, 2002’s Gamecube launch title, Luigi’s Mansion, he had his moment in the spotlight spoilt by the brevity of a brilliant but underdeveloped adventure. Now all he can hope for is a supporting part in the next New Super Mario Bros or Mario Kart, or maybe a co-star role in another Super Mario RPG. What does a guy have to do to step out from his brother’s shadow? 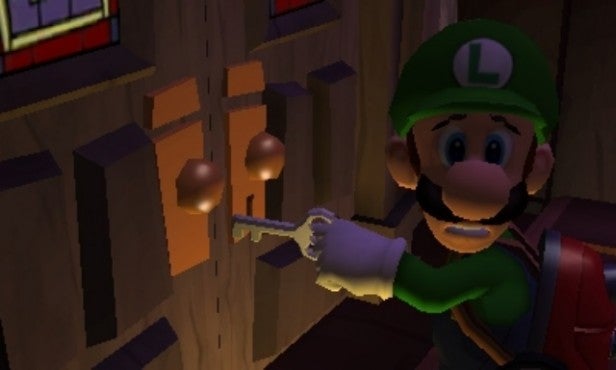 But wait! Eleven years later Luigi’s Mansion has a sequel, and this one feels like restitution for what came before. Not only does Luigi’s Mansion 2: Dark Moon take Luigi’s Mansion and flesh it out into a full-blown ghost-hunting extravaganza, but it also makes the younger Mario brother the star of one of the strongest – if not the strongest – games on the 3DS. We’re not exaggerating when we say that the new Luigi’s Mansion is neck-and-neck with Super Mario 3D Land for the title of best 3DS game. How’s that for sibling rivalry?

At first, Dark Moon appears to be little more than a handheld remake of the original game. Once again, Luigi teams up with eccentric inventor E.Gadd on a paranormal research spree, only this time the ghosts have gone haywire in Gadd’s own spooky mansion, and it seems to have something to do with the disappearance of the titular dark moon from the local night sky. Before long, Gadd has Luigi searching the mansion for fragments of the aforementioned satellite while sucking ghosts up with what looks like a modified vacuum cleaner, the Poltergust 5000. It’s a tough job, but Luigi’s up to the task. 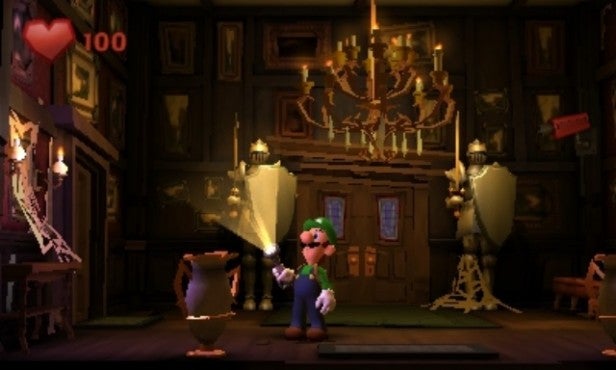 In practice this means a whole lot of exploration, using the Poltergust 500 to interact with the objects, furniture and décor of Gadd’s rather neglected domicile, collecting any coins and cash uncovered (Gadd doesn’t seem to mind) and dispensing with any phantoms found on the premises.

Ghost-busting is a two-step (and sometimes more) process that involves stunning the ghosts with Luigi’s torch then dragging them into the Poltergust 5000, first pulling the thumbstick against the direction in which the ghost is scrambling, then tapping A when prompted for a final, fatal tug. Some ghosts play smart with hide-and-seek antics, protective gear or thrown banana skins, while others play tough with sneaky punches or rush attacks.

At times, you’ll have to tilt the 3DS to aim the Poltergust up and down,
which turns out to be more intuitive than you might think. In the end,
though, play well and all the phantoms will end up safely bound within
the Poltergust 5000, ready to be released into E. Gadd’s care back at
his secret lab. 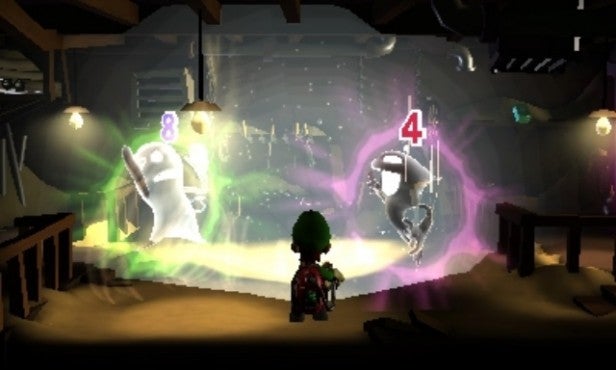 So far, so Luigi’s Mansion, however it’s not long before you realise that Dark Moon is a longer, smarter and altogether more varied game than its predecessor. The mansion holds more secrets, and the way the game is structured into a series of manageable missions encourages you to re-explore areas with new equipment, like an alternative torch-beam that reveals hidden objects to be cleaned of spook infestations.

Each mission opens new areas of the mansion to explore, while throwing in new tasks like clearing spider webs with some ingenious use of flames. This is a rich, imaginative adventure, dense with possibilities. It’s also a huge amount of fun.

Best of all, the mansion of the title is just the start. The retrieval of a new moon fragment opens up
new areas of the haunted valley, including towers full of dodgy pipework
and slightly too carnivorous plants and a spooky factory. Each displays
the same kind of loving detail found in the first mansion, and if
anything the action just keeps getting better, with botanical balloons
to float with and multiple ghosts raising the challenge bar – though not
to the extent that it’s ever frustrating.