“You’re a big man, but you’re out of shape. With me it’s a full time job. Now behave yourself.”


If you’ve seen Michael Caine in Get Carter, you’ll remember the line. The message? Even if you think you’re tough, don’t mess with the professionals, and messing with the professionals is exactly what Capcom has done here. Lost Planet is a big game, but it is out of shape, and when you’re up against the likes of iD, Valve, Epic, Monolith and Infinity Ward, that’s guaranteed to make sure you get a pasting. 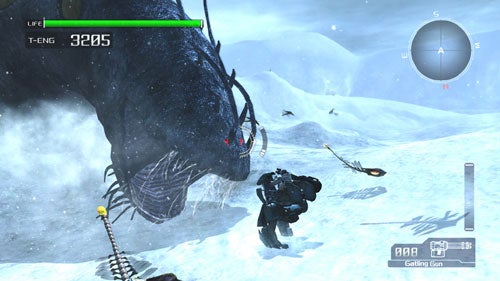 What a shame. Keiji Inafune, the brains behind MegaMan and Onimusha, wanted to blend Capcom’s Japanese house style with the Western 3D shooter, and to some extent that’s exactly what he has done. From the Capcom side of things, Lost Planet brings us excellent character and creature design, masses of cut-scenes and some hugely impressive boss battles. Visually, it’s nothing short of stunning. It takes guts to set a whole game on a desolate, icy world, but Lost Planet transforms it into a place of genuine spectacle and very real danger. The weather effects are superb, the blinding glare that reflects off the snow is one of the finest uses of HDR we’ve seen, and the wrecked architecture occasionally gives Gears of War a run for its money. Amazingly, things just get better the more you go on, with dazzling underground scenes where the insectoid Akrid have made their homes, and dramatic vistas en-route to a volcano base full of rippling lava and heat haze. All in all, Lost Planet sits comfortably with the 360’s finest visual achievements. 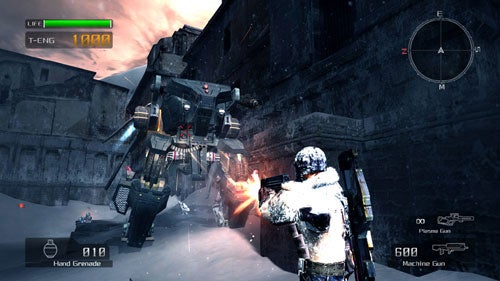 The Akrid, meanwhile, are a triumph. I’ve lost count of how many games owe Starship Troopers a heavy debt, but Lost Planet improvises on the basic themes in ways that make you forget Paul Verhoeven’s movie ever existed. Even the meanest grunts are fascinating – each with a weak point that proves the key to dispatching them – while the larger entities, all spinning spines, scorpion stings and razor claws, would make decent bosses in any other game. In this game, however, normal bosses wouldn’t do. Monumental beasts with armoured carapaces and an arsenal of acid-spitting, ice-breathing weaponry, Lost Planet’s head honchos fill the screen with a bluster we’ve not seen since Resident Evil 4. If you want proof that nobody does baddies better than Capcom, Lost Planet is it.

One of the game’s big innovations is the importance of thermal energy – you need to collect it to survive the crippling cold, and it also recharges your health when you’re hit hard by enemy fire. This doesn’t just make a neat alternative to the usual health-pack system, it also keeps you scanning the area for possible sources of the stuff (oil drums, fuel tanks and the like) and the fact that Akrid and humans leave energy behind when they die ensures that you have to throw yourself into combat just to keep your supply maintained. Clever stuff. 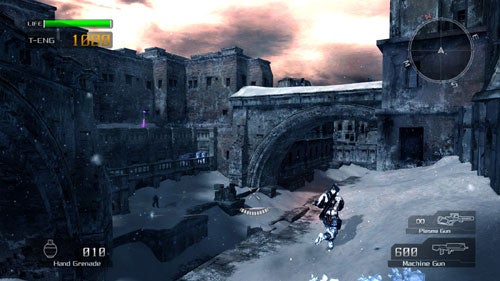 That’s not all. Other 3D shooters have thrown in mechs and combat suits to add a little variety to the game, but Lost Planet successfully integrates them into the core gameplay. As your hero progresses through the game’s levels, he comes across a wide range of ‘Vital Suits’ – VS for short – with different armaments, capabilities and even vehicle transformation functions. Stomping around in them is a lot of fun, particularly in levels where your main foes are human ice pirates or sinister government forces. Nothing feels better than obliterating an enemy so much smaller and weaker than your heavily armoured self.


And kudos also goes to Capcom for equipping your character so well. The weapons cover the usual bases – machine gun, shotgun, rocket launcher – but each packs a meaty punch and the slow reloading on the heavy arms adds a real tactical dimension to their use. Energy weapons, meanwhile, are innovative and exciting, taking time to charge but with effects that make it worth the wait. As these use thermal energy for ammo, they also demand considered use. Best of all, most weapons come in heavy variations for VS use, and these can be ripped off a VS and – provided you don’t mind the extra weight – used to batter bosses or take down larger enemies with relative ease. 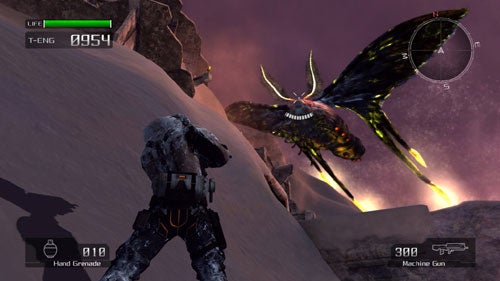 Even movement shows signs of the magic Capcom touch. For a start, they’ve actually made a grappling hook work; always accessible from the X button, it’s a crucial part of navigating your way through the levels, and encourages you to make full use of vertical spaces for sniping or sneaking past enemy emplacements. The third-person camera and quick rotate buttons work well, and the auto-aim is neither too sensitive nor too vague. And while we’re throwing out bouquets, let’s chuck one to the audio team. With its thunderous explosions and booming gunfire, not to mention a fantastic score, they’ve done a truly brilliant job.

Sadly, however, it’s time to replace the bouquets with bricks. Lost Planet constantly fails to engage. The culprits? Well, personally, I’m blaming the level designers and the AI team. 90 per cent of the time the levels are unquestionably dull; the scenery may be spectacular but the gameplay itself is a linear trudge through a sequence of chambers, dispatching Akrid, ice-pirates or government forces in methodical and predictable fashion, with little to raise the pulse-rate or push your shooting skills to the max. 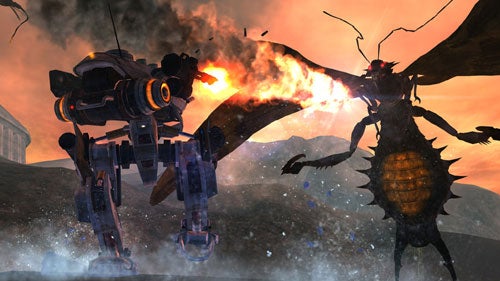 There’s no real sense of pace or drama, and when the game suddenly decides to up the ante, it does so through brutally unsubtle means: throwing vast quantities of enemies at you in wide open areas where the most sensible course is just to get through to the next checkpoint as rapidly as possible. Compare it to Halo, where the ever-changing combat situations had you constantly adjusting your play style, or even Gears of War with its nervous racing from cover to cover, and there’s really no question which is the most engaging experience. The levels pick up occasionally, when you find a new VS or have to tackle a particularly vicious bunch of Akrid, but it’s hardly a game of memorable moments.


The AI, meanwhile is pitiful. You can’t blame the Akrid – they’re a bunch of swarming insects, after all – but the humans show no sign of intelligence or organisation, and when you think Half Life could simulate both nearly a decade ago, there’s really no excuse for that. Partly as a result, most of the main levels are almost pitifully easy, even on the medium difficulty level. 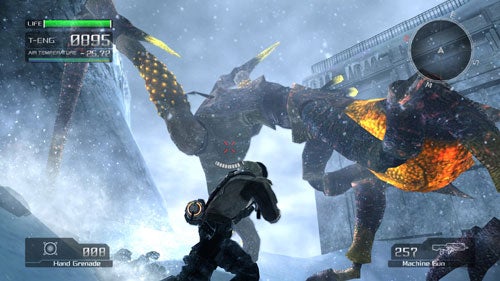 Doubtless some of this comes down to the fact that Capcom focussed its attentions on the boss battles. True, the scale is impressive, the boss design awesome, but neither of these things make these epic scraps enjoyable. In most cases, it’s just a matter of finding the weak point then slugging it out, doing what you can to maintain thermal energy and health in the face of frequently overwhelming special attacks. In some cases, these attacks are so enormous that you’re swept off your feet for seconds at a time, with the vast majority of your health wiped out before you get a chance to recover. It says something about a game when in one mission, on medium difficulty, it took me under twenty minutes to sweep through the level then over fifty to battle the boss at its conclusion. It leaves you with a quandary: turn the difficulty down and cruise through the game, or keep it on medium and have an experience with mountainous peaks of trickiness.

While we’re moaning, let’s not forget the twits who plotted this one. The whole narrative arc is bewildering, with characters that switch sides suddenly, without motive or warning, and little chance of working out what the hell is going on despite exposition scenes that stretch out towards eternity. And – I know it’s a cheap shot – who came up with the names? A hero called Wayne? A female comrade called Basil? You can change the pronunciation, Capcom, but the subtitles never lie. 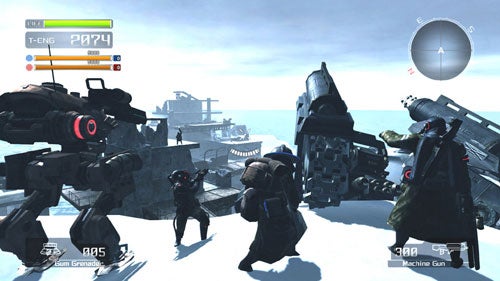 The overall effect is extremely frustrating. You can see all the components of a great game, but they’ve been assembled with little thought or feeling. If anything, it makes you appreciate the likes of Half Life 2, FEAR, Call of Duty 2 and Gears of War even more, because you can see how much better the levels are orchestrated; how these developers have learnt to create interesting spaces and fill them with enemies in order to create a real sense of tension and release, leaving you breathless with excitement. Lost Planet merely keeps you waiting for the game to get its ass into gear.


Some would have you believe that multiplayer is a different story, but even here it has to be said: it’s simply not that exciting. The levels are enormous, and there are options to fight for Battlefield-style control points or just eliminate the enemy, but the action lacks any real punch. Even though the setting, the VS suits and the heavy weapons give the game something extra over your standard deathmatch game, it’s all a bit slow-moving and oddly bloodless. It’s hard to believe anyone would prefer this to Gears of War, Ghost Recon or Call of Duty 3. 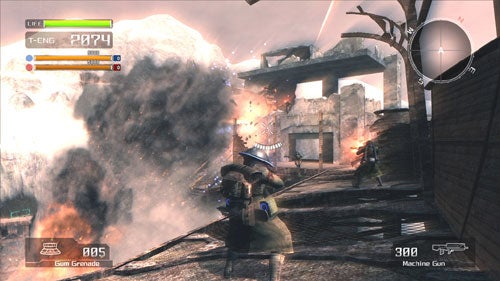 But that’s exactly the sort of competition this faces. I’d love to see Capcom have another crack; to marry its Eastern expertise with what is the definite Western genre, but if it does so it needs to go up a notch from this. It’s not that the skills aren’t there – Resident Evil 4 and Devil May Cry 3 prove that Capcom can do action as well as anyone – but Lost Planet shows little sign of them in application. And when you think of the work that has gone into so much of the visual design of this game that’s near enough a tragedy….


An astonishing looking 3D shooter that consistently fails to engage anything except the senses. Unless you’re desperate for a new fix of action, you’re better off with the big boys of the genre.