Available on Xbox One, PS4 (reviewed), PC
Let’s not beat around the bush: Lords of the Fallen is at best a homage to Dark Souls, and at worst a cover version. Nearly everything you know and love or hate about From Software’s gloomy masterpiece is here, from the weighty, almost physical approach to combat to the way the world and your enemies reset every time you die. You might be collecting XP rather than Souls and trading it in at weird crimson floating checkpoints, but the basic mechanics of gameplay are practically identical.

This is a game of making your way carefully around dark corridors and along crumbling battlements, tactically slicing and dicing your way through creepy knights and shambling monsters, hunting for loot and anxiously banking XP to level up. It’s a game where you’ll die quite a bit, and then face a scramble to retrieve your ghost and associated XP with the risk that you might die again and lost the lot. It’s a game that puts emphasis on carefully timed blocks and dodges, and on understanding the rhythm of light and heavy blows, not to mention how these differ from a shortsword to a greataxe. 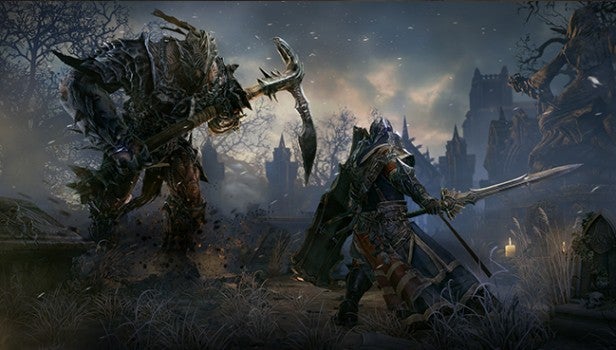 Mechanically, it’s very solid – and even a little more forgiving than its inspiration. Enemies are revived and reset when you die, but not when you save, so there’s no penalty for what Dark Souls sees as excessive caution. Checkpoints are placed where you want them – at the opening of an area, or where you’re about to meet one of the game’s titular bosses – and it’s relatively easy to level up and build your attributes and magical abilities, even if it involves a bit of fight, die, repeat along the way. Cleverly, the ghost that holds your XP when you die can be used as to heal if you stand in close proximity, which can be enough to help you survive a tough boss battle. Lords of the Fallen even throws in a fairly powerful ranged weapon early on, which you can switch to when you’re under fire, or when you need to thin down enemy ranks before rushing into battle.

It’s also a little more accessible. Character creation restricts you to three classes and three schools of magic, giving you a choice of warrior, rogue and cleric archetypes you can customise with a choice of primarily offensive, defensive or diversionary spells. You can further modify your character by opting for light, medium or heavy armour, or choosing different weapons, allowing you to quite radically switch how fast you strike and dodge, or how resistant you are to incoming attacks. Where Dark Souls can be opaque, sending beginners scurrying to forums and FAQs, Lords of the Fallen is a lot more welcoming, with optional tutorials and an approach that says ‘don’t worry if you make a poor choice now. Fix it later.’ 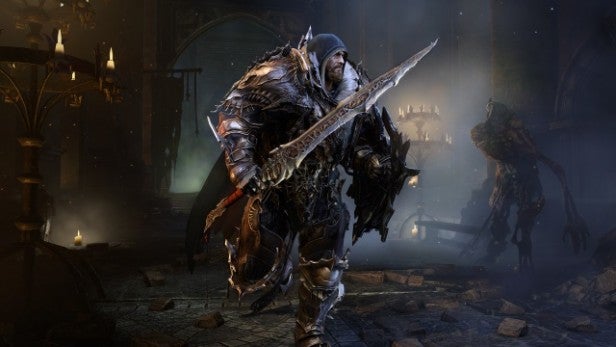 That doesn’t mean it’s easy. At the opening you’re hopelessly equipped and it takes time to find your way into the rhythm. Some of the enemies come sporting what seem unblockable, high damage attacks, and there are some cheap surprise ambushes built in. Lords of the Fallen has a very clever gambling mechanic – giving you a bonus multiplier on XP that grows up to the point you bank – and this encourages you to take risks. The downside of gambling, of course, is that sometimes the odds aren’t stacked in your favour.

Most worryingly for more casual players – and particularly those who aren’t Dark Souls aficionados – Lords of the Fallen has some fiendishly tough bosses. The first proves vulnerable to warrior characters but a real ordeal for rogues and clerics, while the second uses a combination of vicious spamming moves and enemy summons, making him tough work if you’re not prepared with a decent weapon and some effective magic. After these two they seem to get a little easier, but you should still get ready for some cheap knock-out attacks and keep your eye out for vulnerabilities. 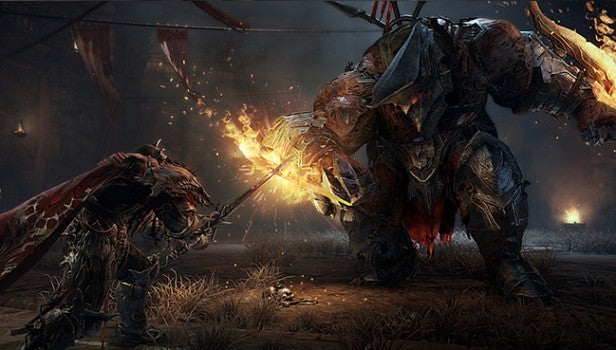 Lords of the Fallen doesn’t want you to give up, and you can always bulk yourself up by grinding for XP and making sure that you’ve explored every part of every area and opened every chest and locked door. It’s also the kind of game where practice makes perfect, and where grinding doesn’t feel like tedious repetition as much as a necessary part of reaching your next goal. All the same, if you don’t like Dark Souls, then there’s still a very good chance you won’t like this.

Lords of the Fallen, then, is a game built by people who have analysed Dark Souls, pulled it apart, and tried to build something similar, but with a slightly wider appeal. The problem is that it’s not as strange, grimly beautiful or distinctive as its inspiration. We’re still not sure whether the story is deliberately oblique or just undercooked, but either way the plot, the protagonist and the secondary cast are utterly unmemorable, as if someone had read a few Joe Abercrombie novels, thought ‘I could do that’ and given it their best but not quite good enough shot. 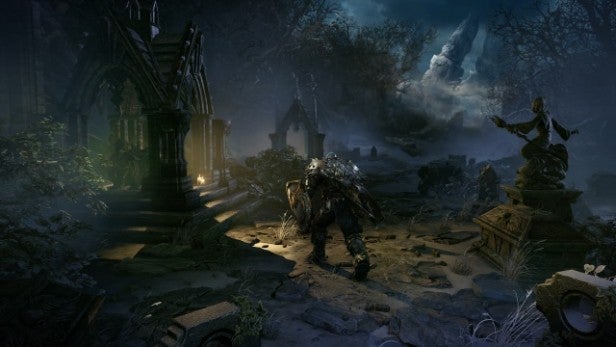 There’s atmosphere in the game’s creepy settings and frequently impressive graphics, but Lords of the Fallen doesn’t have the mystery or sinister power of Dark Souls and its sequel. The bosses are brilliantly designed, the rank and file enemies less so. The scenery can be magnificent, beautifully lit and packed with realistic rippling banners and motes of dust, but it’s all a little dark fantasy generic. And when it all comes down to it, you’re just another bruiser looking for a fight, not an explorer in a haunted, fallen land. Though it’s a sharper-looking game, making good use of next-gen hardware, is it actually more convincing or immersive than Dark Souls and Dark Souls 2? We’d have to say not.

And while the graphics themselves are – as we said – impressive, not all is right on the technical front. We can cope with the odd bit of texture pop-in or the occasional shonky frame rate, but we’ve had bosses frozen in position until they remember the next phase of their attack (not that we complained at the time) and voices disappear until the game was shut down and restarted. Skip a boss intro cut-scene, and you might find that the action opens just as said boss is smashing his way through half of your health bar. 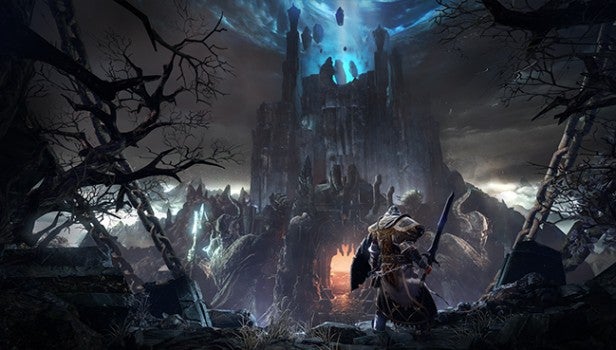 Meanwhile, enemy animation can be awkward, particularly around stairs, and while there’s an enemy lock on the camera (press R3 on PS4) – and we suggest you use it – it still has a horrible tendency to focus on the wrong enemy, resist refocussing on the nearest enemy, then leave you hopelessly unable to see as said enemy gets right up in your face and the camera goes hopelessly awry. Hopefully all these issues will be fixed with a near-future patch, but wouldn’t it be nice to see games released without them?

For all these failings, you may well find yourself persevering. Lords of the Fallen might not be Dark Souls, but even a cover version of a great song can be brilliant in the right place at the right time. Just as you can be happy watching rock classics cranked out by a solid bar band in a pub with a beer or two in hand, so Lords of the Fallen will happily fill a few days between finishing Dark Souls 2 and tackling next year’s Bloodborne. For a large section of its audience, that – and the fact that it’s running on next-gen hardware – will be enough.

Verdict
It might be a cover version of Dark Souls, but at least it’s a good cover version, with solid mechanics, gripping combat and a few twists that make it slightly more approachable to newbies. Lords of the Fallen suffers from a forgettable story and some generic art, and could be a fair bit tighter, technically speaking, but if you like your Souls and want a slightly different take, it’s a decent buy.