But surely, you might say, the Battle for Middle Earth is over? Aragorn and Gandalf have triumphed. The Ring has met its end in Mount Doom. We’ve already fought our way through Helms Deep and the Pelinor Fields. Why does EA feel the need for another campaign? 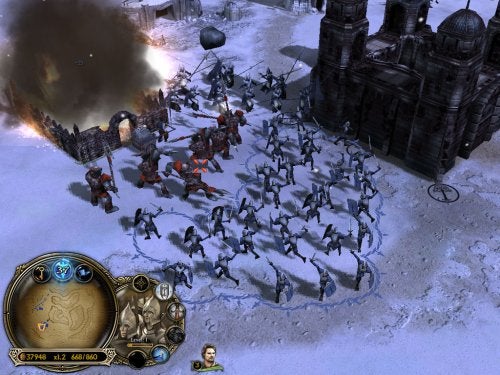 Probably, I would reply, because there’s still a lot of money in the franchise. Less cynically, I might add because it gives them a second chance to do things right. For all its pleasures – and there were many – Battle for Middle Earth always felt a little RTS-lite. On the one hand, it was easy to get the hang of, even in the unlikely event that you’d never played an RTS before. It boasted a lovely streamlined interface, gorgeous graphics, and an amazing sense of scale. What’s more, it had the tone and feel of the movies, from the ethereal lighting to the wispy elven music, down pat. On the other hand, there was an awful lot of poncing around with Hobbits while you were waiting for the big battles to kick off, the storyline was padded out with bizarre interludes, and there was a tendency for many maps to disintegrate into that time-honoured pattern of build base, defend base, build massive army with super units, then attack enemy structures. And the bizarre restrictions over where and what you could build were – frankly – a little bit silly.


With Battle for Middle Earth 2, EA has taken what seems like an uncharacteristically brave move. Where the events in the trilogy take place in the South of Middle Earth, the sequel shifts focus to the North, where dwarves and goblins scrap over cavernous mines, and where the elves of Mirkwood and Lorien stave off raiding parties or fight to drive the goblin hordes from icy mountain passes. Luckily, this isn’t just a brave move – it’s a good one. 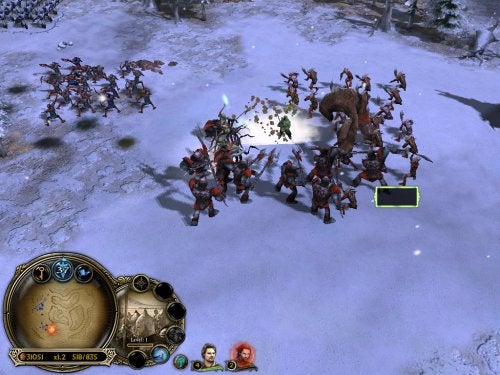 Why? Because by casting off any real pretence of sticking to the story in terms of plot or character, the designers have given themselves more room to be creative. Don’t fret. As far as look and feel goes BFME2 is still firmly rooted in the cinematic vision. It’s just found space to branch out, with new playable factions – elves, dwarves and goblins – and two new story-based campaigns with which to explore their capabilities. Can the elves of Lorien save Rivendell and build a force to take Sauron’s fortress at Dol Goldur? Will the forces of evil triumph and wipe the smarmy point-eared aesthetes from Middle Earth? You decide.

As with all good RTS games, the distinctions between factions go way beyond cosmetic changes. In the broadest sense, BFME2 plays like a fantasy Starcraft. Men and dwarves take the place of the Terrans, building secure outposts then more powerful super units with which to demolish enemy bases. The goblins act like the Zerg, building quick but relatively weak units with which to swarm enemy bases, but with the assistance of a network of tunnels that can be used to quickly speed new recruits into battle. The elves are – in some respects – the Protoss; smaller in number, but more powerful in combat capability and special abilities. And whomever you’re playing, there’s always fun to be had. The goblins can command trolls and mountain giants, who act like mobile siege engines, throwing rocks at structures or demolishing units in massed ranks. The dwarves get their own cool war machines, and battalions of lethal axe throwers to go with them. 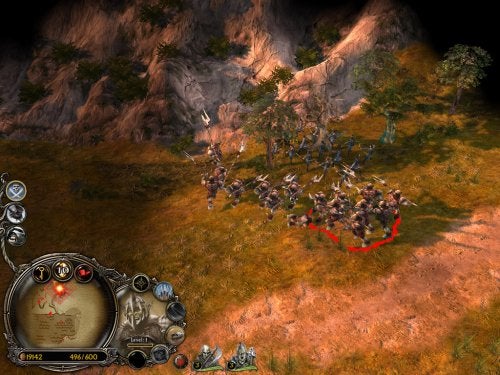 The team has also made efforts to tidy up the overall game mechanics. What was already working has returned for the sequel, including the hero units – though these are less recognisable this time around – and the special powers which enable you to heal your forces or bring down a swarm of arrows at a click. However, this time you can build bases where you like, add your own protective walls and defences where you wish, and add distinctive features to your fortress home. The goblins, for example, eschew decorative features for spider-pits and rock-lobbing giants. It just makes the place feel more homely, don’t you think?


In the wake of Rome: Total War, there have even been attempts to add a new layer of tactical complexity. Units are now mostly larger, and can be placed in different battle formations and assigned aggressive or defensive stances. In some battles, this seems to work quite well, but a lot of the time, with constant attacks to guard against and counter-attacks to mount, there’s a tendency to go into the old fashioned “lasso a bunch of thugs and throw them in the enemy’s direction” routine. To be perfectly honest, this usually proves just as effective. And while the AI is pretty good – not constantly attacking the same spot, wise to vulnerable resources, and always looking for a weak point in your defences – it’s no Caesar or Napoleon. In fact, the old lasso routine seems to be a favourite choice for the computer as well! 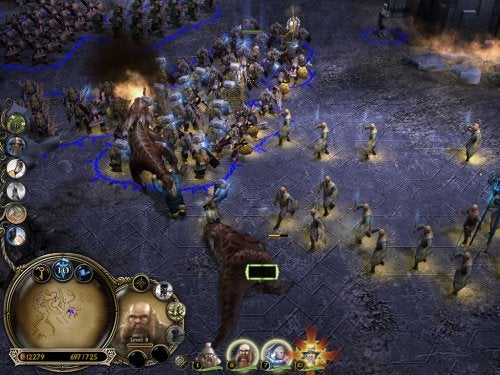 More variety comes in the form of naval battles, which usually occur within the context of a land-based map, but offer some thoroughly enjoyable moments. Perhaps those glimmering elf ships have the edge on your black-sailed Corsairs, but let’s see how they like it when a troll rows an exploding death ship up to their bows. It’s time for spectacular explosions all round.

Please note: nothing mentioned above is really new, and I struggle to think of a feature here without thinking “Oh, didn’t that turn up two years ago in x?” However, it’s all very slick, agreeably paced and relatively well-balanced. True, there are only sixteen single-player missions, but each has an individual feel with interesting primary and secondary objectives, and the difficulty level ramps up thoughtfully. Best of all, there seems to have been some idea at work as to what players would actually like to do if they had the chance in Middle Earth. Tell me, what self-respecting goblin king wouldn’t want to raise Lorien to the ground, or trample the hobbits of the shire into their muddy cabbage fields, face-down? 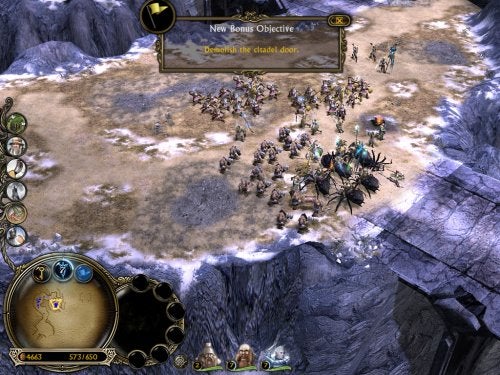 But the real life of the game isn’t in the single-player campaigns, but in the larger-scale, turn-based War of the Ring mode. This transforms the whole of Middle Earth into one massive game of Risk, with one or more players battling AI players or each other to occupy territories, build units and structures, then clash in real-time battle. It’s simple, but it works, and it gives you the chance to fight the big battles of the trilogy with BFME2’s various enhancements.


And those enhancements extend to the graphics. Battle for Middle Earth was already in the running as the finest looking strategy game in town, but BFME2 raises the bar one notch higher. The colossal lumbering super units and rolling seas are impressive; the lighting is out of this world. Sadly, as always, good looks come at a cost. With detail on maximum and hundreds of troops on-screen you can prepare for some slowdown unless you’re packing 2GB of RAM and a high-end GPU and CPU. 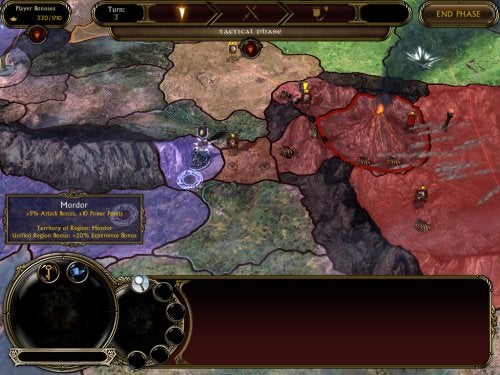 Still, nothing good in life comes without a price, and it’s always good to see strategy games that truly make use of your hardware. So, is BFME2 a drop-dead strategy classic? No. It’s not innovative enough or striking enough, and in the odd moments where I wasn’t gleefully leading the goblins to victory, I had a horrible feeling that I was playing the same game I’d played many times before. But if it does just give a new spin on a classic formula, at least it makes that spin look and feel different and exciting for a while. In this respect it’s a league in front of other recent efforts, such as Age of Empires III or Star Wars: Empire at War. In other words, that return to Middle Earth is justified, after all.


Like a good burger or a pint of the usual, the content is familiar but very tasty all the same. A stunning-looking strategy sequel that moves on from the original in all the right ways.