Although this 5.1-channel home cinema package is primarily intended for use with a PC, it’s equally at home in an AV environment thanks to its generous range of connections and features – particularly its THX certification, which means it satisfies George Lucas’ exacting standards for movie playback.

What you get in the box is a set of five compact satellite speakers and a powered subwoofer, which altogether muster a pretty impressive 500W of power – not to be sniffed at from a compact system.

The identical front and rear satellites sport rather chunky, inelegant bodywork, plus their dark grey finish and meshed grille on the front give them a techy, PC-centric look that some people might not want in their living room, but you can certainly get away with it.


Their build quality is extraordinary – those chunky enclosures make them remarkably sturdy, to the point where you can imagine them walking away unscathed from a fall down the stairs (but we didn’t try that out). We like the way each satellite faces upwards slightly when placed on the tabletop too, and as an added bonus you can wall mount them thanks to the screw holes on the back. You also get a dedicated centre speaker, which is horizontally orientated.

As for the subwoofer, it’s cube-shaped and compact, which shouldn’t pose major problems whether you’re shoving it under a desk or behind the TV, and is styled to match the satellites. It’s a side-firing design with an 8in driver, and is equipped with audio decoders, a 165W amplifier and all of the system’s connections.

These include three digital audio inputs (two optical and one coaxial), which will come in handy if you want to connect multiple sources simultaneously (a DVD or Blu-ray player, Sky box and games console for instance). There’s also a six-channel direct input for connecting PCs, an analogue stereo input and a 3.5mm input for MP3 players and the like. There’s also a panel of springclip terminals for the supplied speaker wire, and these are also found on the back of each speaker, instead of binding posts.

It’s a shame there are no HDMI inputs or HD audio decoding, which would have made this more suitable for use with Blu-ray players and games consoles.

One of the system’s most appealing features is the control console. This is a small desktop unit that plugs into the back of the subwoofer and allows you to adjust the volume, switch between the various sound modes and adjust the levels for each channel. This is obviously of greater use to those using the Z906 as a desktop PC system, but when using it in a traditional home cinema configuration you can use the supplied remote to control those settings, so either way you’re onto a winner.

The console features a large volume dial in the middle, surrounded by a ring of LEDs that indicate the volume level and flash when in Mute. To the right of the dial is a curious-looking cluster of orange lights that represents the layout of the speakers in a traditional 5.1 setup – the point of this is to show you which channel is selected when adjusting the levels. On the other side of the dial are rows of lights indicating the currently selected input (each one numbered to correspond with the rear panel) and the current sound mode.

These modes enhance stereo signals with different effects. They include Stereo 3D, which adds a ‘3D’ surround effect through all speakers; Stereo 4.1, which plays the stereo signal through fronts, rears and sub; and Stereo 2.1, which plays the signal through the fronts and sub. You can, of course, turn them all off and listen to sound in its natural form.

Although its connections and decoding fail to cater for HD audio formats like Dolby True HD or DTS HD Master Audio HD, the Z906 can decode regular Dolby Digital and DTS bitstreams through the digital inputs.

The speakers boast a frequency range of 35Hz and 20kHz, and each one features a 3in polished aluminium phase plug driver.

Once you’ve got over the rather cryptic method of adjusting levels, the system is easy to use. The supplied remote is small and buttons are sparse, but this simple array covers every function – volume, mute, and input, level and sound mode selection.

After rigging up a Blu-ray deck to the coaxial digital input, we popped Avatar in the disc tray and settled back. Flipping to the movie’s best test scenes (Battle for Pandora and Assault on Home Tree) the first thing that jumps out is how remarkably beefy the Z906’s sound is. It gives real body and depth to the frequent missile explosions and rat-tat-tat of machine gun fire, evoking a sense of power and aggression that makes us completely understand why THX gave it the thumbs up.

There also a reasonable amount of detail poking through the bangs and crashes, and some lovely high-frequency work that gives the sound a crisp, perky feel that’s certainly streets ahead of what you’d get from flatpanel TV speakers – a fact that in itself will be enough to persuade some people. This decent detail reproduction is also noticeable during quiet scenes, particularly Jake’s regular expeditions through the Pandoran forest. Listen closely and you can make out distant animal cries, gentle ambience and the rustling of leaves underfoot. It doesn’t tease out this information with the quite the same level of effortlessness and absolute clarity as dedicated home cinema speakers from the likes of Teufel, KEF or Tannoy but it’s a good effort. 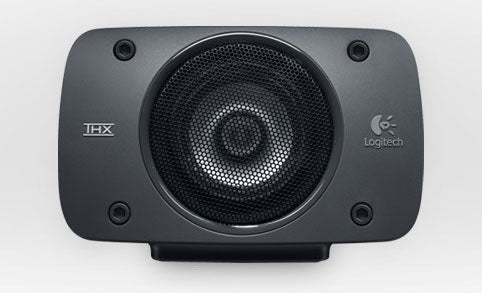 Bass performance is excellent. The sub keeps low frequencies sounding tight and accurate, putting real punch and drive behind effects, plus it can muster a deep, sustained rumble without drowning out the other speakers. We’re also pleased with the clarity of dialogue which shoots through the busiest of scenes without any muddiness or excessive sibilance.

It’s likely that you’ll regularly use this system to play music too, particularly if ifs rigged up to your PC, and if so you can expect a clean, dynamic reproduction of your tracks, anchored by nimble, rhythmic bass notes. Vocals enjoy surprising richness and high-frequencies aren’t thin.

Whether you’re using the Z906 in the office or living room, it delivers a very impressive sound with depth, punch and decent detail reproduction. And although its techy design is better suited to a desk than a TV stand, build quality is extremely robust and the inclusion of a control console is a convenient feature, despite its slightly cryptic quirks. There’s also a useful range of sockets, although the lack of HDMI inputs and Dolby True HD/DTS HD MA decoding is a slight disappointment and undermines the Z906’s status as a cutting-edge home entertainment hub.