Perhaps even more so than mice, keyboards can be a deeply personal thing. Once you’ve found a keyboard you like it’s hard when you have to use a different one. For example, until Logitech’s Wave Keyboard landed on my desk I was still using a clackity old Microsoft PS/2 keyboard and loved it to bits. Likewise, recently one of our old staffers asked to have his old favourite keyboard, which was buried in one of our bottomless cupboards, shipped to him in Taiwan. 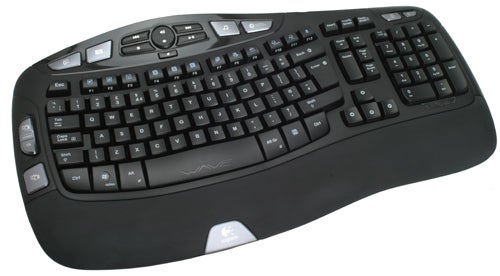 Sentimental it may be, but a good keyboard is like a comfy pair of slippers, slightly worn but still going strong and reassuringly familiar. Still, despite this distinctly British love of the underdog, there are plenty of very decent modern takes on the keyboard and Logitech has long been one of the leading purveyors of all kinds of peripherals, including keyboards.


Available for around £30, the Wave Keyboard isn’t the most compact desktop keyboard you’re likely to find, measuring approximately 48cm across and 26cm deep at its widest and deepest points – making it unsuitable for someone short on space. Its size does mean, however, that it packs in a fair amount besides just the full-size keyboard and numerical number pad.


Just above the number pad is a power button and calculator shortcut button, while above the main keyboard are a set media controls and shortcuts for Media Player, Media Center, and Photo Gallery. Finally, on the left side are quick keys for controlling zooming in imaging programs and Vista’s Flip 3D function. Were this not enough there are even more shortcuts set to Function keys, which can be accessed by a notebook style Fn key on the bottom row of keys. 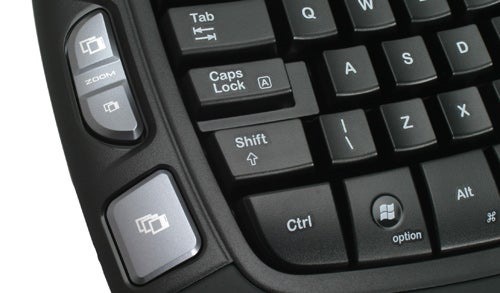 Needless to say then that there’s a fair amount going on here and Logitech’s SetPoint software can be used to configure all these buttons as you like. Once upon a time SetPoint wasn’t the most accessible or reliable of beasts, but of late it has developed into a very well designed and reliable piece of software that makes configuring everything blissfully easy.


So far, so ordinary, but the Wave isn’t just the usual assortment of shortcut keys. Logitech has also made a discernable attempt to make it as comfortable to use as possible: a fact that’s reflected in almost every facet of the design, from the shape, size and feel of the keys and to the height and angle of the keyboard.

As such, you can choose between three different angle levels, four or eight degrees or completely flat, by switching between different legs. It makes a difference too, with the higher degree putting the onus on resting the hands on the keyboard, while a flatter angle allows you to hover above it.

The height adjustment brings with it a welcome level of flexibility and also plays into another design aspect of the screen: its wave shape. This is meant to provide a more ergonomic shape without having to adjust to a completely different type of keyboard, as with the natural keyboards that arrived a few years back. In this design the middle of the keyboard is slightly raised and the areas either side dipped. This creates a natural groove for the hands and the keyboard has a slight curve to accentuate this as well.

Of course, this slightly unusual shape does take a little getting used to: that’s inevitable. But, even after an hour or so it was possible to gather up a fast and accurate typing speed with little discernable effort. It’s a very comfortable keyboard, too. There’s a well contoured palm rest that’s properly cushioned and springy, unlike the cheap and nasty rubber strips that sometimes pass for “wrist rests”. Further aiding comfort are the bottom row of keys, which are angled to sit flush with the keyboard ensuring they don’t cut into the hands.


Vitally, for all its comforting features, the keyboard itself is simply very good. If you’re used to old style keyboards it may seem alien at first. Each key has a very light and deceptively spongy feel to it, yet the actual mechanism remains very crisp and responsive. Consequently, every key press requires the minimum of effort, helping to reduce fatigue and increase typing speed. This, along with the ergonomic design and adjustability, results in the keyboard that remains comfortable to use over long periods, while construction is workmanlike and should be able to endure a long and hard life. 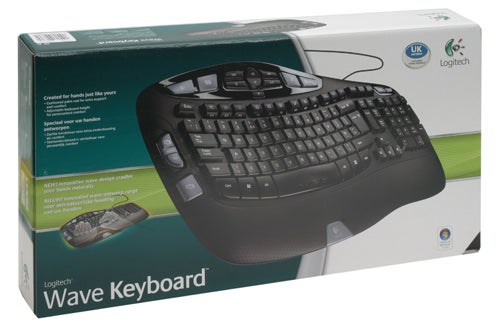 If one were top have a single criticism of the Wave, though, it would probably be its appearance. Its size has already been noted and there’s no problem with its subtle shades of black, but the somewhat chunky shortcut and media control keys lend it an almost childish air – “My First Keyboard” if you will. It’s something you quickly get over once you come to use it and enjoy the quality feel and comfort, but it seems odd nonetheless given the otherwise sleek exterior.


Ultimately, this is a very good keyboard. Not advanced in any great sense, but well considered and executed and available at a price that makes buying a comfortable and easy to use keyboard within anyone’s budget. So, if you’ve been holding onto an old favourite for too long now, this may well be the tonic. 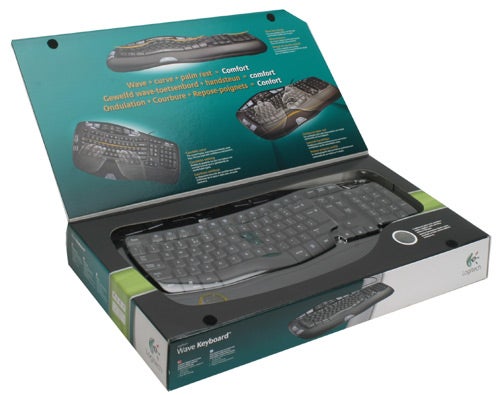 
Though slightly large and chunky, the Logitech Wave keyboard is well put together and makes typing for long periods effortlessly comfortable at a price that won’t break the bank.