The two things we use most on a computer are usually the keyboard and the mouse and has been said plenty of times over years, neither provides much leeway for excitement or innovation. Still, once every so often someone manages to come up with something new and unique, and that’s exactly what Logitech has done once again with the V550 Nano Cordless Laser.


Logitech has always been an innovator: it was the first introduce laser mice into the mainstream, to introduce a weights system for PC mice and the first with interchangeable grips. It also introduced Hyper-Scroll technology, something we at TrustedReviews have a particular love for.


While I doubt there is anyone who prefers using a touchpad to a mouse, bringing one of these along does mean extra baggage. In the case of wireless rodents, that usually includes a dongle (unless they’re using Bluetooth), which can be easily lost if small, and easily damaged if large. These issues have already been ingeniously addressed by the MoGo Bluetooth Mouse, but though it was surprisingly comfortable, it didn’t quite have the same weight or feel as a ‘real’ mouse, and obviously lacked the convenience of a scroll-wheel. 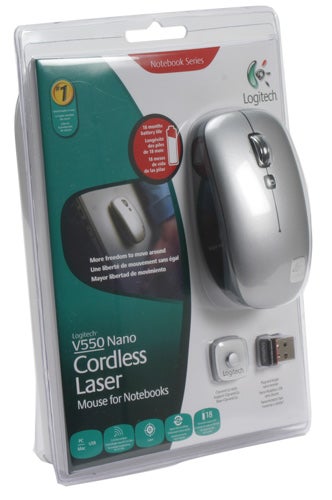 The V550 Nano offers conventional mousing – including some of the bells and whistles of Logitech’s desktop range – in a small chassis, and with a twist: the “Clip-and-Go” dock, which allows you to attach your mouse to your notebook. Issues aside, it sounds like an interesting idea, so let’s see how it and the actual mouse perform in practice.


Opening the (evil) blister packaging reveals the diminutive rodent, a tiny dongle, two cleaning wipes, two AA batteries, a USB dock and small metal case akin to the one containing the weights with the Logitech G9 Laser Gaming Mouse. Inside are two small ‘nubs’ in silver and black, and a plastic ‘handle’ – don’t worry, all shall become clear.

Let’s begin with the least interesting bit: the docking station. All this really is is a USB extension cable with a curved plastic bit at one end. Getting onto what makes the Nano unique, its Click-and-Go dock system, you’ll probably want to have a look at Logitech’s multilingual and well-illustrated Quick-start guide. You see, the company’s solution to attaching your mouse to your notebook is disappointingly simple. Instead of the Nano mouse transforming into a flat sheet of mouldable high-tech material, you stick a little nub on your laptop, and then slot the mouse onto it.


To start with, choose where you want the nub – or grandly titled Click-and-Go dock – to permanently reside. Clean the area using one of the provided wipes, then attach the dock. There are two provided, one black and one silver, which will match most notebooks – though it’s annoying that Logitech does not provide extra colours as a separate purchase.

The base of the nub/dock is adhesive, so to install it just peel off the protective film and stick it on. Be sure to get the placement right though, since while the dock can be removed using the included “removal tool” (the aforementioned ‘handle’), once you’ve done so it can’t be re-used. The dock will form a strong bond in under three minutes, after which you can slot the V550 onto it.


Doing this turns off the mouse automatically, saving the batteries. Overall though, the system is a matter of compromise. Obviously keeping the mouse docked while putting your notebook in a bag is impractical; this docking system has been designed for not having to carry your mouse separately when moving between meetings in the office, or rooms in your home.

And for that purpose, it works well. The mouse clicks in and out easily, yet remains secure during transit. The question is how many users will be willing to put up with the disadvantages. Aesthetically, even if you’re lucky enough that the dock’s colour matches your notebook exactly, it still doesn’t look pretty. Although it’s difficult to see how Logitech could have avoided this, basically it gives the impression someone left a subscription medicinal tablet lying on your notebook’s lid. There’s also an, albeit minor, increased potential for snagging.


While whether you think the docking system is the best thing since sliced bread will depend on how often you move about, how much you resent having to carry your mouse with you separately and how little you mind the blemish on your notebook’s lid, the best thing about it is that it’s optional. Quite simply, if you don’t like the nub, don’t use it – it doesn’t add much cost after all. So, how does the V550 hold up on its own without its useful/gimmicky (delete as appropriate) dock? 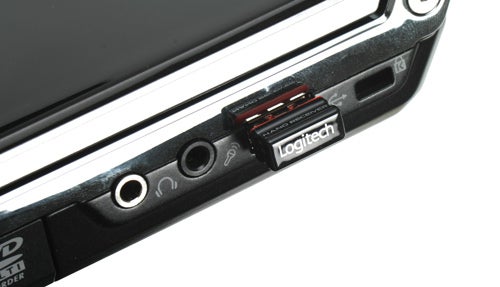 What’s left of the bundle is the mini-dongle and mouse itself. The dongle really is minute, with the protruding bit coming in at just 7mm (the whole dongle is 1.7cm)! As is typical for Logitech, the V550 uses 2.4GHz RF technology, rather than Bluetooth, a fact that makes it a true plug and play device for Windows and Mac users. 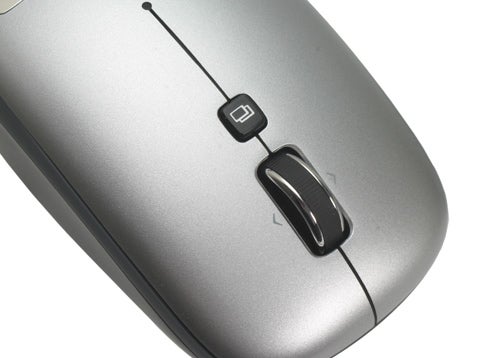 Getting onto the most important item, the mouse makes a good first impression. Like all Logitech’s notebook mice except its VX range, the V550 is perfectly ambidextrous. It’s by far the simplest model in the company’s notebook line-up, in terms of look and shape if not functionality. As such, there are no moulded contours or curved finger-rests to be found here. It’s still very comfortable to use, though, with the batteries giving it just the right amount of weight. The matte surface provides a pleasant feel and even for larger hands the buttons and wheel are comfortably within reach – the only exception to this is the Document Flip shortcut button below the scroll wheel.


Unfortunately, you will probably be using this button a lot, since it is one of only three: the scroll wheel does not act as a usable button. If you’re frowning right now, then let me put a smile (back) on your face: the excellent reason the scroll wheel cannot be used as middle-click is because it acts as switch for the Hyper-Scroll function.

For those of you who have not read our extensive reviews of the Logitech Cordless Desktop MX5500 Revolution or Logitech MX Revolution Mouse, Hyper-Scroll is the company’s brilliant innovation in scroll wheels. It allows you to switch between traditional notched scrolling (brilliant for gaming) and free-wheeling no-resistance scrolling that’s perfect for navigating long documents and web pages.


Using the easy and intuitive Logitech SetPoint software you can adjust most aspects of your mouse, including assigning any function you wish to the buttons. Thus, if you tend to use ‘middle-click’ often, just assign it to the Document Flip shortcut. 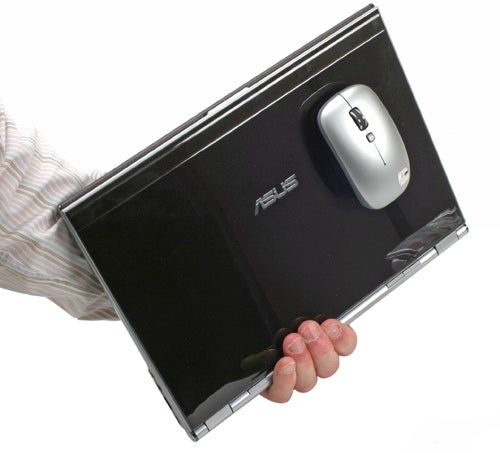 Much like that found on the of the Logitech G9 Laser Gaming Mouse, the V550 has a large button on the back that releases part of the frame. This reveals the battery compartment and dongle cradle. Battery installation is incredibly easy; however, while it’s great being able to store the dongle inside mouse, it would have been better if Logitech had followed Microsoft’s lead here and gone with an indent like the Microsoft Wireless Laser Mouse 6000 v2 that didn’t require taking the mouse apart to store the dongle. 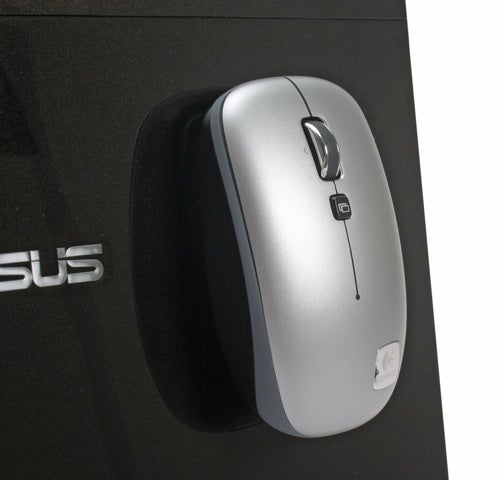 On the bottom is the metal retention mechanism for attaching to the dock, the switch which automatically turns the mouse off when docked, and a separate on/off switch with its own LED indicator. Meanwhile, three Teflon pads ensure the V550 glides smoothly across your desk.


The last standout feature of the Nano is an incredible 18 months of claimed battery life! Yes, you read that right, under normal usage conditions this amazing little critter ought to give you 547 days of use before the juice runs out. Obviously, I could not personally verify this claim – unless you fancy waiting over a year for this review – but if it even comes close it’s still astonishingly good. 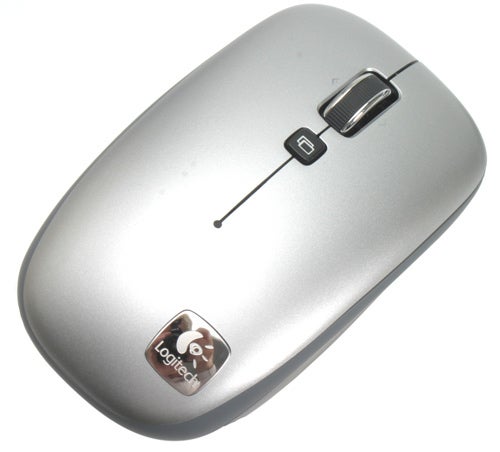 The problem with the Nano V550 is, as is often the case, a rival product: its older sibling. If you’re not sold on the whole ‘docking’ idea and can live with changing the batteries once every half year, then Logitech’s own VX Nano offers better ergonomics, a more stylish look and extra buttons, in addition to a protective carrying case – and can be found for less online.


While it’s certainly innovative, the idea behind the V550 Nano’s ‘notebook-docking’ will be somewhat impractical for many and looks a tad ugly. And though it’s a great mouse on its own, unless you really want the claimed 18 month battery life, Logitech’s VX Nano is probably a better option.