What is the Logitech UE Boombox?

Remember the days when trendy young folk used to saunter around graffiti-laden streets, looking not for fights but dance-offs? No? Well the Logitech UE Boombox is a sort-of modern throwback to those days.

It’s a £200 oversized portable speaker with design nods to the boombox hi-fis of the 80s. However, it doesn’t quite sound good enough to merit its price. 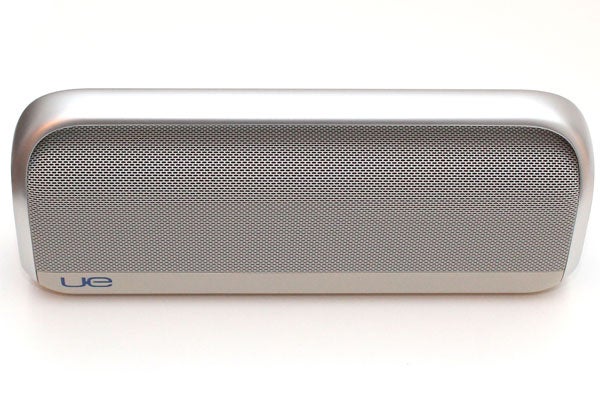 The Logitech UE Boombox is an ode to the boombox of the cassette era. Those speaker-heavy portable hi-fis seem like tech dinosaurs these days, but the premise behind them is making a comeback thanks to the rise of the wireless speaker.

Technologies like Bluetooth and Wi-Fi Direct make a portable hi-fi seem like a good idea once more. The Logitech UE Boombox just takes a more literal approach than most.

It’s a sturdy, simple-looking blue/grey/silver curved box with an immovable aluminium handle that helps to give the Boombox a strong, expensive feel.

Although not quite beautiful, its look does stand out. The Logitech UE Boombox’s outer is mostly speaker grille, and it ‘all-wireless’ approach leaves with little need for many sockets of buttons. There’s just a 3.5mm aux input and a power jack on one side,  oversized volume buttons on the other and a couple of necessary power/Bluetooth pairing controls. 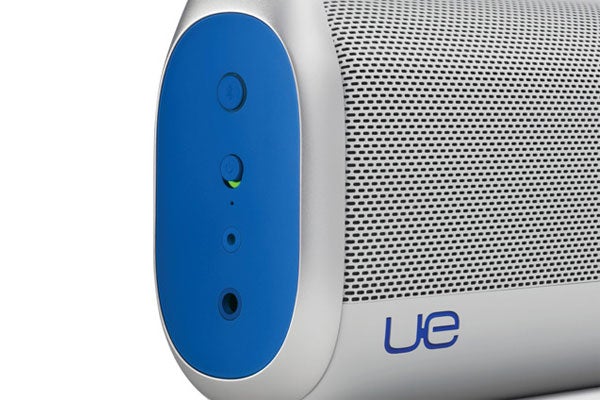 It’s a striking speaker, but there are a few design blips. Most noticeable, the carry handle doesn’t stick out far enough from the speaker’s body to let you get a firm grip on it. You can only grasp it with the lightest, most effete approach – not the way people would grip a ‘real’ boombox, and not very comfy either.

This spoils the otherwise decent portability. The Logitech UE Boombox has an internal battery that lasts for around six hours on a full charge, playing at low-to-mid volumes, and its lightly rubberised plastic underside feels like it could withstand a knock or two.

This is not a true rugged speaker, though, with no water resistance certification and a metal speaker grille that will dent easily enough if you give it a whack. Many will also find it a little large to be a truly convenient portable speaker, at almost 40cm across.

Still, this is a speaker for those who value the UE Boombox’s portable cred. For starters, it’s a Bluetooth speaker but doesn’t use the advanced Apt-X codec. This is a higher-quality transmission method than the SBC codec found here, and is designed to limit the loss of sonic information inherent in most Bluetooth streaming.

You could argue that the difference between Apt-X and SBC streaming is secondary in a small-driver device like this, though.

The Logitech UE Boombox uses four drivers – two 3-inch woofers and two 0.5-inch tweeters, arranged as a stereo pair behind the speaker’s opaque grille. Many wireless speakers only have mono speakers, but 3-inch drivers are still on the small side. 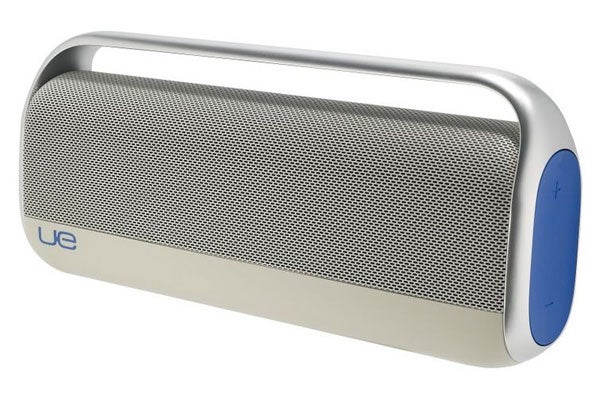 To aid these drivers, the UE Boombox has two passive radiators per bass driver – although none of these are visible from the outside. These are there to help the Logitech UE Boombox pump out sufficient bass.

And it certainly does. True to its name, there’s a powerful bass boom to the Boombox, which should come in handy if you want to listen to tunes outdoors where bass will tend to dissipate.

However, with indoors listening the bass is disappointingly unruly. It sounds juvenile and unbalanced the sound, muffling out some detail and giving a pretty unrefined listening experience.

It’s bassy and powerful, but in trying to recreate the bass slam the ‘boombox’ name suggests, Logitech has trampled over the treble a bit. And it’s a shame because when not being bombarded the top-end is sweet and detailed.

Should I buy the Logitech UE Boombox?

The Logitech UE Boombox sounds bigger and better than most portable wireless speakers, mostly because it is a lot bigger and altogether a higher-quality gadget. However, at £200 it’s a tricky equation to settle.

There’s too much bass boom for the UE Boombox to sound like a speaker worth £200, and its portability is limited by the odd design of its metal handle. This one’s for hardcore boombox revivalists only.

The Logitech UE Boombox is a high-quality Bluetooth wireless speaker with a distinctive look. However, its bassy sound isn’t quite good enough for the price and the handle reduces its portable convenience significantly.