The basic premise behind wireless headphones is great – no wires, no cable noise and no real ties to your music player beyond the range of whatever wireless standard your headphones happen to use. The reality, however, is often quite different. TheLogitech UE 9000 headphones side-step most of the sound quality and reliability issues thrown up by cheaper wireless headphones, however their £300 price means only those who desperately want wireless need apply.

In terms of design the Logitech UE 9000 are presented as full-size, over-ear headphones. From a quick glance, you might assume they’re nothing more than that, however they actually pack-in far more features than almost any other set of headphones we’ve tested in the last year. 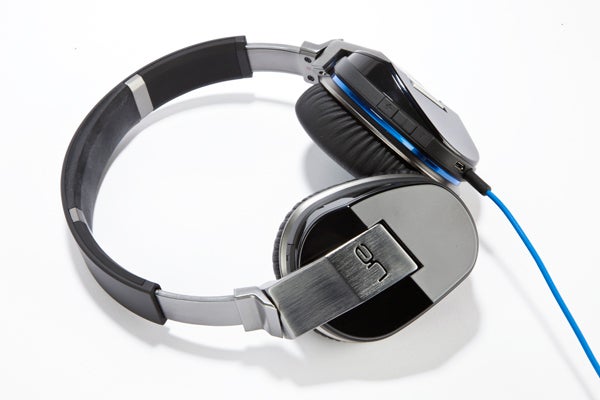 Not only are they relatively high-end headphones, they also offer wireless audio over Bluetooth, the apt-x codec for higher-quality streaming, internal microphones for hands-free phone calls and – just for good measure – active noise cancellation. To be perfectly frank they’re ridiculously feature-packed, which goes some way to explaining why they cost £300.

Ultimate Ears – which is what the ‘UE’ part of the Logitech UE 9000 denotes – has traditionally stood for sound quality above all else, but these latest headphones in the range also give a nod to style. The Logitech UE 9000 have a retro-tinged angular look that see-saws between an 80s and 90s flavour. The styling is undoubtedly an acquired taste and we have to admit that at first we were totally unconvinced by the look of them. This initial impression did soften, however, as we spent more time with them. 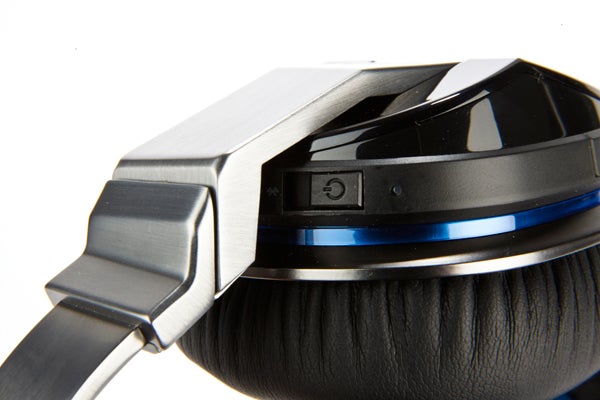 The bold styling is an important part of the Logitech UE 9000 modus operandi. These are headphones that want to be worn out on the street – those angular lines positively stick two fingers up at the Beats headphones that proliferate on the nation’s high streets.

The Logitech UE 9000 hardware design is completely geared towards outdoors use too, and not just in the inclusion of flexible Bluetooth wireless. 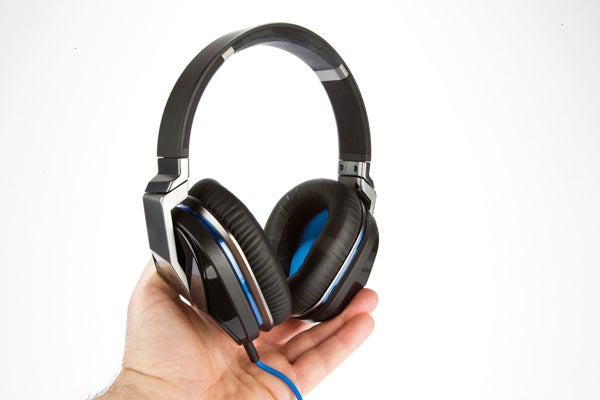 These are fairly heavy headphones, thanks to their need to include more circuitry than the average set of cans, along with a hefty battery to supply the 10-hour wireless stamina. To compensate for this the Logitech UE 9000 take a few measures to make sure they stay glued to your head.

The headband grips your head with a decent force, and the headband padding is topped with a rubberised material rather than fabric or protein leather. This offers much higher friction, keeping the cans stuck to your noggin even if you want to go for a run. This type of material is also used in the Monster Beats Solo HD, for more-or-less the same purpose. 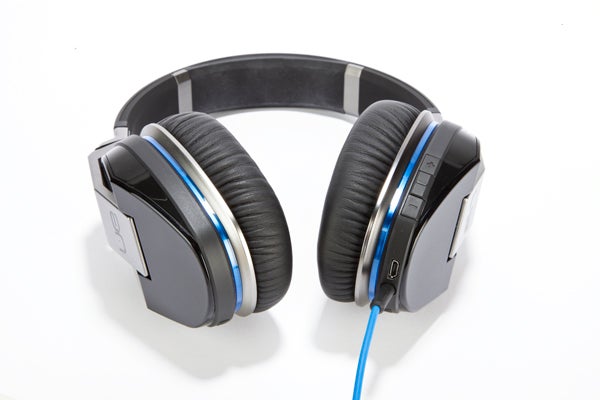 A tight fit and a relatively thin rubber-topped headband don’t exactly make for a luxurious fit, however the UE 9000’s certainly aren’t uncomfortable, thanks to the good synthetic leather pads. They’re thick, and judge their level of softness well to balance comfort and noise isolation.

Isolation is one of the most important components of a portable headphone, and here the Logitech UE 9000 really shine. Although they offer active noise cancellation when “turned on”, isolation remains excellent without this feature being turned on. Logitech may claim that it wanted to make the most flexible headphones possible, but it does make us wonder why the UE 9000 really need active cancellation technology, especially given how much it adds to the overall cost. 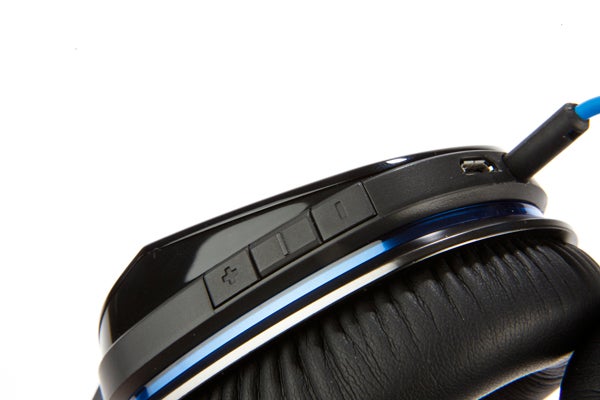 You see, here’s the rub – the active noise cancellation isn’t particularly good. Indeed the natural isolation is so good in the first place, that the active element only serves to highlight the slight hiss it adds to the sound bed. It isn’t noticeable while you’re listening to anything but the quietest music, but does suggest that Logitech didn’t invest too much development dollar into this part of the equation. The active noise cancellation removes some low-end and mid-range hum, but overall it feels like a bit of an afterthought.

Looking at the Logitech UE 9000 less critically, though, they offer the full package in terms of noise blocking when cancellation is activated. The cancellation zaps lower-end hums, and the isolation smothers higher-end noise that active noise cancellation isn’t so good at wiping away. 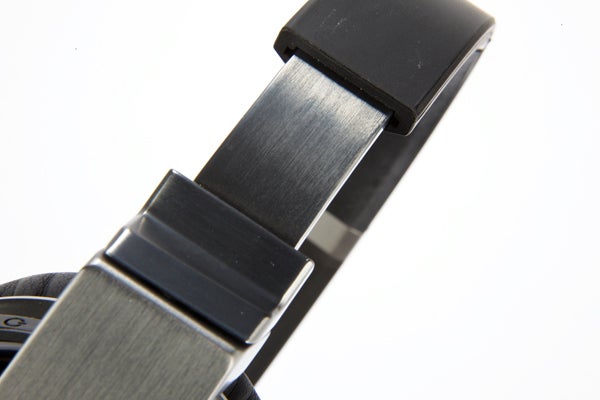 Features such as noise cancellation can largely be controlled from the headphones themselves. On the right cup you’ll find a power switch, which activates the noise cancelling and Bluetooth, along with a trio of buttons handling volume and track control when using Bluetooth. To complete the package for cancellation and calls, there are microphones on the bottom edge of each ear cup.

However, if you get fed up of the annoyances of Bluetooth, you can wire up and use the Logitech UE 9000 with regular headphone cables. On the bottom of the right-side cup is a 3.5mm jack port to let you connect to your music player in the old-fashioned way. A cable is duly supplied in the box, and this even features a three-button remote housing so that you never have to take your music player out of your pocket (assuming it’s an Apple device – these headphones are designed primarily for the Apple brigade). 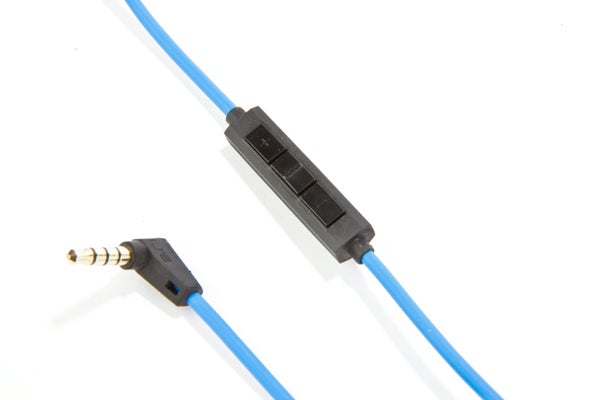 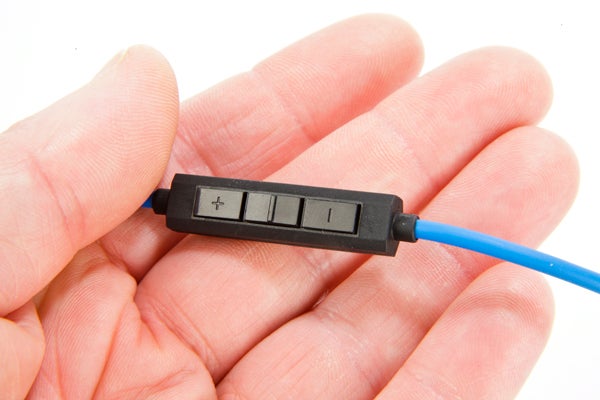 The Logitech UE 9000 use 40mm dynamic drivers, the standard type for headphones of this size. To begin with, we found these headphones a little underwhelming for the price. They sound good, and balance the priorities of sounding fun (important for portable street headphones) and sounding balanced (important for all headphones) well. However, they’re not the most refined cans we’ve ever wrapped around our ears. 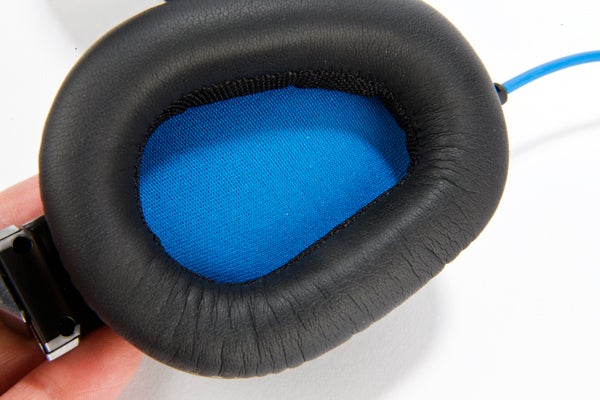 It comes back once again to a question of adding features, and how that can completely skew the notion of the sort of sound you’re getting for your money. Put them on and press play and they sound more like a great pair of £150 headphones, however we’d expect a bit more for headphones costing twice that amount.

However, the Logitech UE 9000 do have an ace hidden away under an earcup. It’s a feature that Logitech doesn’t shout too loudly about, but it’s probably our favourite techy extra of the lot. 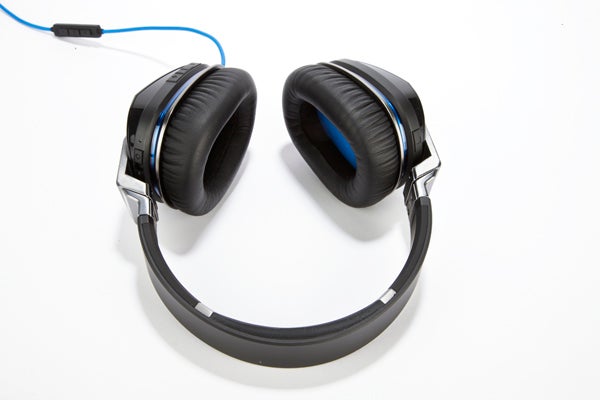 The feature in question is an internal amplifier – something that you’ll hardly find in any headphones, let alone ones from a big manufacturer. Some are sceptical about what built-in headphone amplifiers can really do, but the difference here is unmistakeable.

Bass performance improved hugely when the Logitech UE 9000 amp is engaged. Sub-bass performance is really quite phenomenal, making these some of the most exciting headphones for dance music we’ve ever heard. It’s so powerful that it has that physical effect of a subwoofer, where you not only hear the bass, but feel it.

Audio purists may shake their head at such things, of course, but it’s so low down that it doesn’t muddle-up the sound. And it’s incredibly fun too. 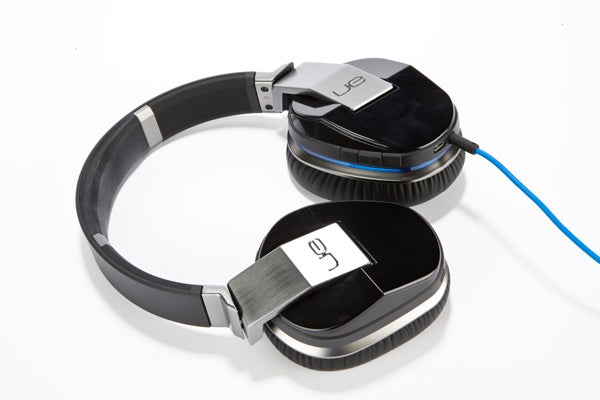 The Logitech UE 9000 wireless headphones have a richer feature set than just about any other set of cans on the market. Features include Bluetooth wireless, noise cancellation, integrated microphones and even an integrated amplifier. All these extra bits and bobs send the price sky high though, and the fidelity of the sound can’t match the best at £300. However, switch on the internal amp and they offer some of the most exciting bass of any headphones. If you like your dance music pumping, there are few better sets for the job. However, Ultimate Ears also makes a cheaper non-wireless model that you should check out if you don’t mind using a cable.