The Squeezebox range has long been at the forefront of the ever growing market for streaming audio devices. Whether the original Squeezebox (then made by Slim Devices) or the latest Squeezebox Duet, with its funky on-remote screen, all bring together a cracking combination of top-notch sound quality, a multitude of features, and supreme ease of use.


However, all previous Squeezeboxes need to be plugged into an existing Hi-Fi to actually get any sound out of them, making them far from a one stop solution. Well, Logitech has now rectified this with the release of the Squeezebox Boom. As well as the circuitry for receiving a digital music stream over a wired or wireless network, the Boom also incorporates an amplifier and array of speakers. So is this the ultimate digital music solution? Let’s find out. 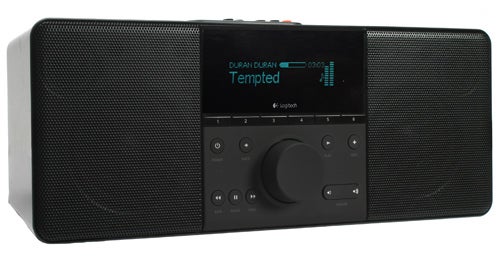 As with previous Squeezeboxes, the Boom’s styling is simple and elegant with its glossy black body and cuboid shape. Looking at the pictures, you could be forgiven for calling it a little dull but in the flesh the superb build quality and choice of contrasting matt and gloss materials has a definite air of quality to it.


What’s more, there are a number of other features that take this already good first impression and raise it to a whole new level. The first is the screen, which uses a fine grid of dots made using Vacuum Fluorescent Display (VFD) technology. This makes it bright, fast reacting, detailed and readable at even the most acute angle. Combined with subtle touches like ambient-light-dependent auto-dimming – the display dims when it’s dark – and you have a seriously versatile, easy to use display. 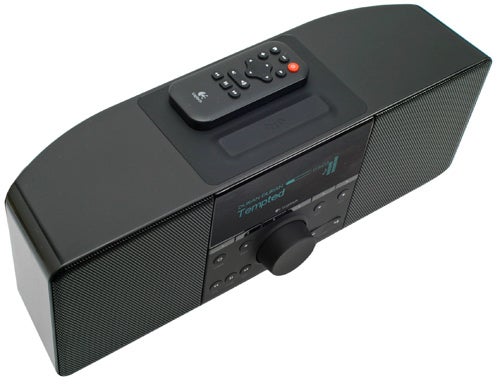 We also love the middle rubber section on the Boom’s top. To the front is a snooze/sleep button, which lets you set sleep times of one song or 15/30/45/60 mins and snooze your alarms for 10 mins, but the really neat bit is the recess behind. This houses the remote when it’s not in use so, at least in theory, you’ll never again be left turning the living room over trying to find it. What’s more, the remote is magnetic, which is a nice touch. 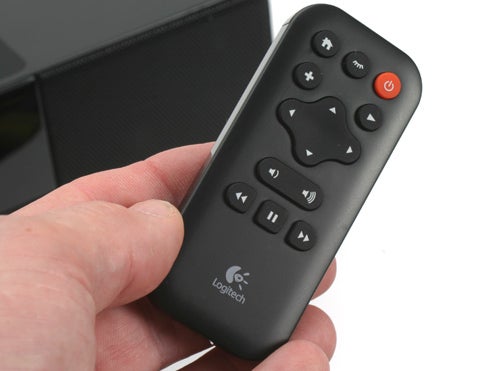 The remote itself is actually a bit of a let down, though. Its spongy rubber buttons and lightweight plastic construction just lacks the finesse of the rest of the unit leaving it looking ”almost” out of place. At least it functions as you’d expect and has a decent range. There’s even a dedicated snooze/sleep button so you don’t have to get out of bed before rolling over for another ten minutes beauty sleep.

Aside from that impressive display, the front houses a relatively familiar set of hardware controls. In the centre is a large control dial, which is primarily used for navigating the menus but once the volume controls have been pressed it can also be used to quickly dial-in the volume level you would like. The fact it defaults to navigating menus rather than adjusting volume does take a while to get used to and will no doubt confuse your guests but it’s certainly not a big enough deal to annoy. 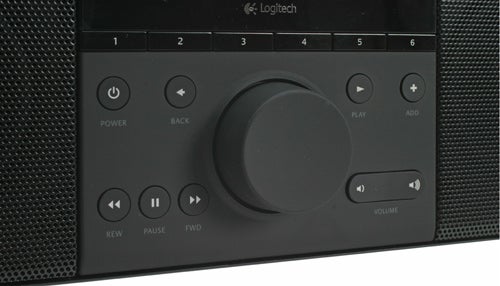 One other intriguing unconventional touch is the play button. Rather than a traditional play/pause button there are separate play and pause controls. The play button is treated as a selection button in the menus so if you pause one stream then start browsing the other available radio stations, pressing play will play whatever you’ve selected in the menu rather than resume the track you paused. Again, it’s not an annoyance but it does increase the learning curve somewhat.


Six station preset buttons bisect the central panel, enabling you to recall your favourite Internet radio stations at the touch of a button. Storing new stations is accomplished by holding down the button for a second or two and switching between selected stations is very quick. 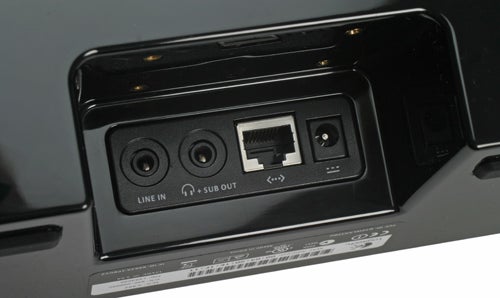 Round the back, the Boom’s intended use as a standalone device is made clear as the selection of inputs and outputs is very slim. There’s just one line input and no outputs, digital or otherwise, for passing the raw music onto a fully-fledged receiver/amplifier. There is a sub-out for bolstering the Boom bass response but Logitech doesn’t provide a matching sub so its uses seem minimal. At least it doubles as a headphone output for those times when your neighbours have had there fill of DJ NextDoor’s latest hits. Of course, there’s also an Ethernet port for connecting to your wired network.


Setting up the Squeezebox is a doddle if you have a clue what you’re doing in the first place but for the complete novice the sheer wealth of options may be a little overwhelming. 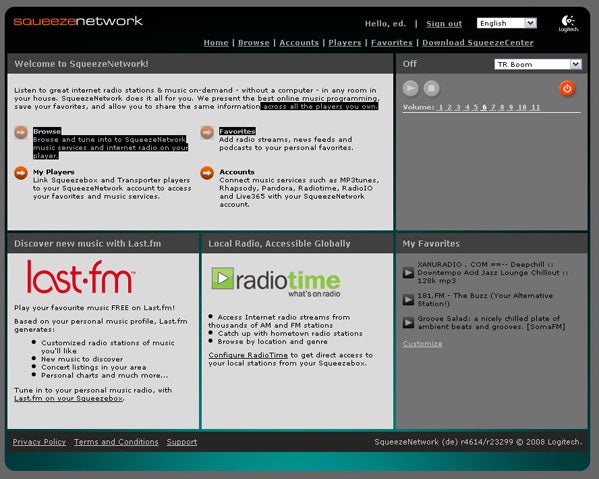 For a start you must sign up for a SqueezeNetwork account, which gives you access to myriad internet radio stations from ShoutCast and live365. Then, if you want to use them, you must also register for the streaming mp3 services like last.fm, as well as your own personal online mp3 store (provided by MP3tunes). Finally, to listen to your own music streaming from your computer, you must use the SqueezeCenter software.


This scans your PC for music files and communicates with the various Squeezeboxes you have around your house. You can add an iTunes library to it, manage your SqueezeNetwork account, and even browse Internet radio stations (and tune in on your PC). There’s one big problem, though…

If you’ve set up your digital home sensibly you’ll have either a low-power server, like the Windows Home Server based Tranquil T7-HAS, or a Network Attached Storage (NAS) device of some sort, like the Cube Station CS 406, that stores all your shared media. Although many of these sorts of devices do allow you to install extra programs on them, a fair number don’t. Even on those that do, the process can be overwhelmingly complicated.


If you can’t get SqueezeCenter installed on these devices, to access your music you have to install the SqueezeCenter software on another PC, which has access to the shared folders. You must then keep both the PC and the server/NAS box on at all times – far from ideal. The one saving grace here is that SqueezeCenter is open source and available for any platform that supports Perl so you’re more likely than not to stand a chance of getting it working.

Once you’ve signed up to the myriad accounts for your online services and to the SqueezeNetwork, and you’ve got SqueezeCenter installed and ready, you can finally get down to some listening and it’s here that the Squeezebox Boom really excels. Despite its compact frame, the Boom delivers a powerful, detailed, and rich soundstage that can be pushed to impressive levels of volume. As is always the case with small devices, the sound is a little narrow (and the inbuilt stereo-effect enhancer does little to help this) but it’s perfectly good for casual listening. Moreover, with the Squeezebox range supporting just about every file format you can think of, including lossless formats like FLAC, you don’t have to re-encode all your music into different formats for all your different players. 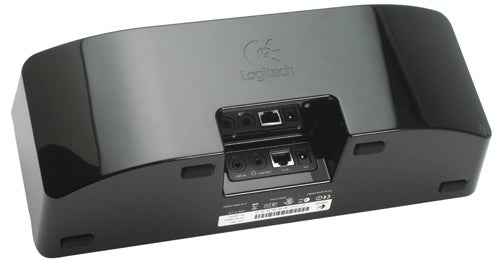 Overall then, if you already have a Squeezebox hooked up to your main Hi-Fi and you just want something small and simple to extend that functionality to another room, then the Squeezebox Boom will be right up your street. However, we feel that as a standalone device it’s a bit lacking. For a start, while you can receive conventional local radio broadcasts via (yet another) online service, the quality is very poor and we’d much rather the Boom just had normal DAB or even just FM tuners. On top of this, we’d also like to see CD playback, though we do appreciate why this isn’t included. 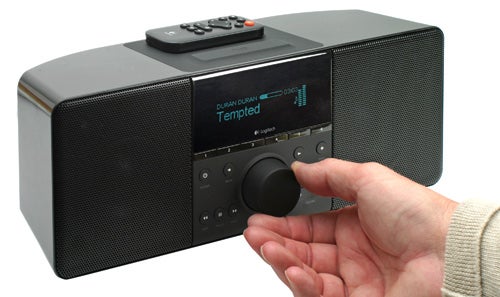 Finally, because the Boom is so packed to the rafters with functionality it just feels a bit complicated for its apparently casual use and most people would be better off with a decent quality DAB radio that they can just plug their mp3 player into the back of when needed.


The Logitech Squeezebox Boom is undoubtedly an impressive device that would make for the perfect accompaniment to an existing Squeezebox setup. On its own, though, it doesn’t quite master everything and some might find its initial setup and controls a little convoluted. That said, once set up, it does work and for its diminutive size the sound quality is excellent.