Logitech has long had an eye for an attractive looking product and the Pure-Fi Mobile continues this trend. With a slim casing weighing just 460g, an attractive glossy black front fascia and silver accents surrounding its four speakers it is elegant and unfussy. That isn’t to say it is simple, however, since inside the relatively small shell hides a virulent infection of technology

As the name suggests these are designed to be portable speakers. Including support for Bluetooth 2.0 EDR and its associated A2DP stereo audio profile, they can be paired with a music phone or capable MP3 player to stream music wirelessly. Most portable speakers might add a 3.5mm auxiliary jack and be done with it, but the Pure-Fi Mobile takes things a little further.


Naturally enough it ”does” have a 3.5mm AUX jack, but it adds a mini-USB port. Using the provided cable you can connect the speakers to a PC, most likely a laptop in this instance, and they’ll operate as a USB audio device. And, where many suffice with replaceable batteries, this set features integrated rechargeable Lithium-Ion batteries with a quoted continuous playback life of 12 hours. 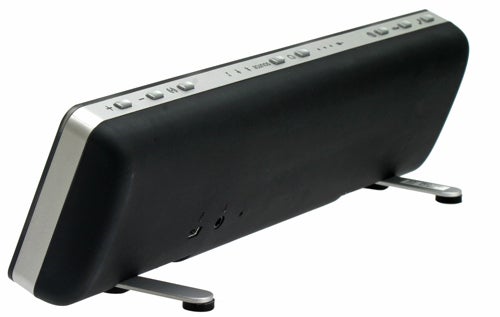 As if this weren’t enough you can also use the set as a speakerphone, as it features array microphones and call control buttons for answering calls when paired with a phone. Throw in the handy soft carry case and ability to charge over USB, a vital pre-requisite for any “mobile” device to our minds, and Logitech is already making a strong claim for the most comprehensive portable speakers available.


This belief is only enhanced when you take a closer look at the design. For example, the back is covered entirely in exceedingly grippy rubber, making the unit very easy to carry and thanks to a couple of rotating stands at either end the Pure-Fi is very stable, too. Buttons along the top of the device are logically lain out and clearly labelled and though there’s a ‘Source’ button for selecting inputs, the device will automatically detect and switch to any newly inserted input.

Pairing is relatively straightforward, or as simple as Bluetooth allows, with no stupid finger contorting button combinations required to start the process – just hold down ‘Source’ for five seconds, enter the PIN number (0000) into your device and away you go. Bluetooth range will vary depending on your device, but the maximum range of 10 metres is more than enough.

So far, so good, but predictably the one area the Pure-Fi Mobile is less impressive is in sound quality. In some respects, for a small set, it’s quite impressive; it does, for example, reach some astonishing volumes given its size – handy when outdoors. 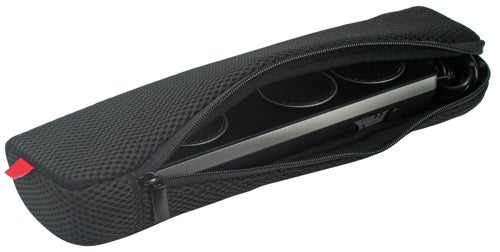 Yet, most of the usual issues still apply. Bass is mostly lacking, with only hint of the true depth portrayed, thus creating a relatively top heavy sound. In fact, in this case, where percussion is more audible than bass, it still sounds somewhat compressed compared to the mid-range.


Some of this is moot since you wouldn’t expect high fidelity sound from such a small set, but it’s all relevant depending on what music you listen to. Acoustic and Vocal-centric tunes are produced very well and pop music shouldn’t pose too great a problem, but heavy rock and RnB/Hip-Hop isn’t so good. A point must be made of the stereo sound expander, though, as it does a great job of creating a wider sound from a narrow point.

Call quality is pretty solid, too. It’s not going to pick you up from the other side of the room, but it works perfectly well at a reasonable distance and having a civilised conversation is no problem at all.


Our only other issue with the Logitech Pure-Fi Mobile is the price. Online retailers have it listed, but not in stock, for around £75 – a fair amount less than the £100 MSRP. In either case, though, this is quite an expensive bit of technology even considering its wide and very well implemented feature set.

Indeed, one can’t help but feel that the feature set has priced the Pure-Fi Mobile into a niche. While the call control features are a nice touch, it’s not something the world of portable speakers has been missing all this time. One would quite happily live without the array microphones, pay a little less and enjoy the musical abilities all the more. Still, if you can swallow the cost, this is the most complete mobile speaker set we’ve seen and delivers competently on the features it offers.


A very well featured and designed mobile speaker set, the Logitech Pure-Fi Mobile is let down by a price that’s bound to prove a little too rich for many, while the sound quality is decidedly average.