iPod and iPhone speaker docks vary a great deal. Some, like the Bowers & Wilkins Zeppelin, winner of our Product of the Year Award in 2008, are high-end stereo replacements. However, most are rather more ordinary and the Logitech Pure-Fi Anytime has modest pretensions as a bedside table stereo with iPod and iPhone integration.


To this end it has all the features you’d typically expect to find in a clock radio. You can program two different alarms and you can choose to be woken by a regular old buzzer, the radio or your iPod or iPhone. There’s also a battery backup, to protect you from power cuts, but no DAB radio here, just regular FM/AM options with a wire FM antenna already attached. There’s also a 3.5mm auxiliary jack for connecting non-Apple players and devices, though this cannot be used for alarms and devices connected this way cannot be controlled using the included remote. 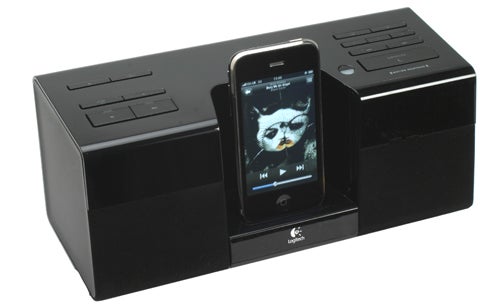 So far, then, you’d understandably think the Pure-Fi Anytime had very little out of the ordinary to offer. However, it does have a trick up its sleeve since this is the first iPod/iPhone speaker dock we’ve seen that features magnetic shielding and so can be used with an iPhone without resorting to the airplane mode.


This means you can happily plug in your iPhone, leaving it to charge and play music, and if it rings you can just pick it up and take the call. Logitech hasn’t gone the whole hog and included a microphone and call control to make it hands-free, but that would have added cost and as it is the Anytime does its job just fine. 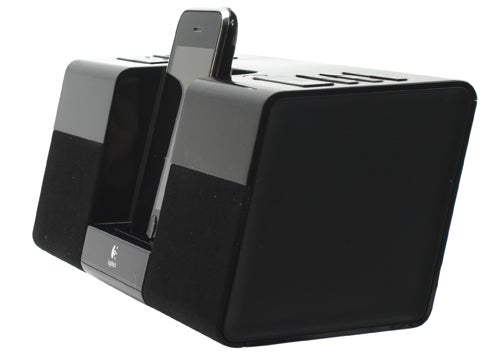 As we’ve come to expect from Logitech the Pure-Fi Anytime is a neatly designed piece of kit, too. Finished largely in a combination of glossy and matte black plastic, the slightly off camber shape (I’m reliably informed it’s a parallelogram) gives it a funkier appearance than your regular boxy device. At the front, meanwhile, the docking section is neatly housed within a cutaway section, ensuring your iPod/iPhone isn’t exposed to being knocked off its perch, though you still have to rely on rather clumsy plastic adapters – none of which seem to fit an iPhone perfectly. 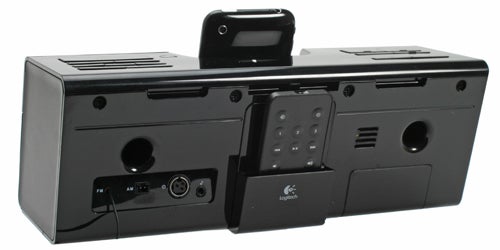 Then, on the back, there’s a small and very useful compartment for housing the provided remote. This is your typical slim-line effort with blister-style buttons that are fairly responsive and offer enough feedback to avoid confusion. On it you can control most of the devices functions, including selecting saved radio stations, Play/Pause and Next/Previous controls for your iPod, volume controls and alarm controls for selecting an alarm and snoozing. You can also cycle through the different modes but, unlike the Gear4 Blackbox 24/7 we looked at a couple of weeks ago, you can’t navigate iPod/iPhone menus using the remote – something we’d have liked to seen on this, too.

On the top of the dock there’s a large number of control buttons that, for the most part, are logically and intuitively arranged – even if they lack the button mashing friendliness of the Blackbox 24/7. These are also backlit in a subtle orange (handy in a dark room) and this lighting is activated by simply waving your hand over the top of the device. This is made possible by the integrated motion sensor and it’s quite a neat feature, since it also allows you to snooze your alarm in the exactly the same manner and thus avoid the annoying fumbling for the snooze button in the morning. 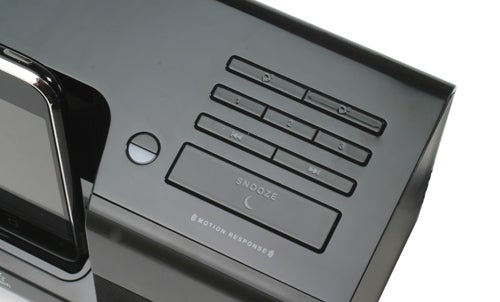 There are also three levels of brightness for the backlighting and the display at the front, so you aren’t blinded or distracted in the dark. As for the display itself, it’s not as large as the one found on the Blackbox 24/7, but it’s bright and easily legible in bright light.


It’s these kinds of touches and the magnetic shielding that arguably justify what is a reasonably high price tag of £70 to £80 – around £30 more than the Gear4. However, the Pure-Fi Anytime is let down somewhat by its sound quality, which isn’t anything like as good as the price tag might suggest. 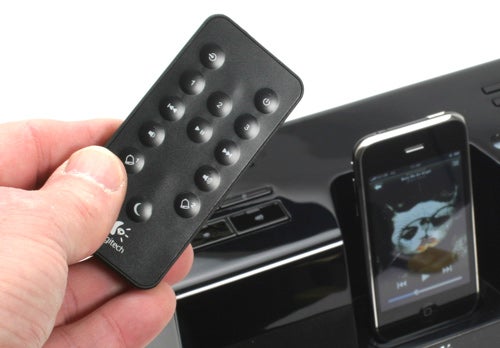 Though the Anytime can reach reasonably high volumes without becoming a crackly and distorted mess, whatever the volume there’s a distinct lack of clarity and therefore liveliness to its output. Instead you’re left with a rather muddy, cluttered and disinteresting sound that makes more or less any style of music sound rather flat.


This isn’t such a big deal when listening to radio, where the demands are lower, but with an iPod or iPhone plugged in the performance rarely delights. We should temper all these comments by adding that if you’re not all that bothered about sound quality and are simply after convenience, the Pure-Fi Anytime is by no means awful, but for the money we simply expect a little more than “okay” performance. 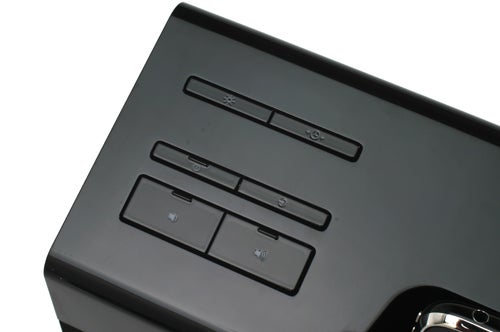 
Unique features, such as magnetic shielding for your iPhone and a handy motion sensitive snooze function, means the Logitech Pure-Fi Anytime has plenty going for it in the features column. However, its sound production doesn’t really meet the expectations created by its relatively high price.