You might not have thought it, but Leonardo Da Vinci, Aristotle, Mahatmah Gandhi, Albert Einstein, Winston Churchill, Mozart and my good self have something in common. Yes, like those famous figures I am left handed and much like them, I’ve always been frustrated at the lack of a computer mouse designed specifically for our way of working. Leonardo, Albert and me have always had to look on with envy at the carefully sculpted, beautifully contoured mice that have always been available for right-handers, while us lefties have had to either put up with bland non-moulded mice or suffer contorted hands.


It’s taken a perversely long time, but Logitech has finally stepped up to remedy this. Possibly this is because the Logitech CEO is left handed himself so if he’s made it happen then my left hand goes up in salute to him. 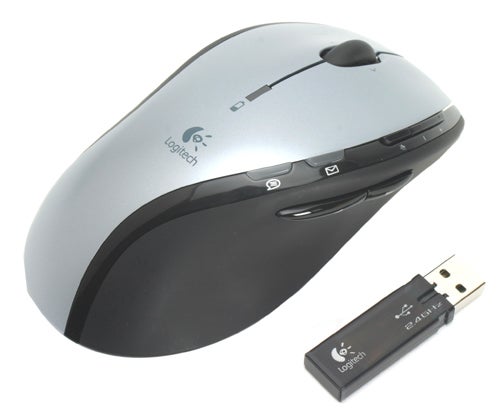 The MX610 Left-Hand Laser Cordless was first announced at CeBIT in 2006, but it’s taken me this long to actually get hold of one from Logitech. The left hand mouse is an exact mirror image of the right hand version of the MX610, which was first released in early 2006, which we actually never got to see, so aside from its leftyness it’s worthwhile looking at here.


The mouse is a pretty good looking device with a silver, grey, and black finish and most excitingly for the left handed user, has lots of sexy curves, something that we’ve previously been starved of when it comes to mouse action. There are seven buttons on its surface, which all fall neatly under the reach of index finger and thumb.


At its heart, the MX610 features a laser rather than a LED optical sensor, which was first introduced by Logitech on the MX1000. This means that the mouse doesn’t have the red light that optical mice have on the base but more significantly the laser is much more sensitive than LEDs making it potentially able to work on more surfaces than optical mice. I used it primarily on my mouse mat, but it seemed perfectly happy on the wooden grain of my desk. The mouse has a dpi of 800, which is fine but not as good as the 2,000dpi offered by some dedicated gaming mice. 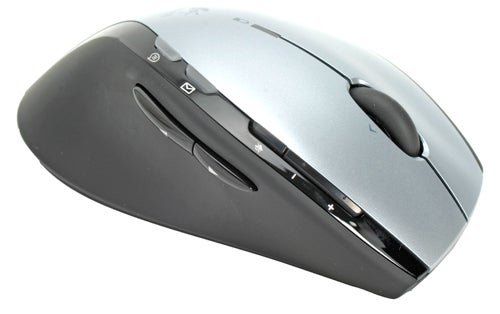 The mouse communicates with the small dongle using the crowded 2.4GHz frequency and some users have complained that as a result the mouse is prone to communication issues. I plugged the dongle directly into the USB port on my monitor so there was very little distance and indeed line of site between the two, so it’s hardly surprising that I experienced no such issues. If your USB ports are only at the back of the PC and you do experience problems then a USB extender cable could be the answer. There isn’t one included in the box but there is a PS/2 to USB converter so you can use the mouse without taking up a USB port if you don’t have one free.

The 2.4GHz frequency also enables the mouse to receive information from the PC as well as transmit – Logitech refers to it as a smart mouse. It knows when the PC is in standby mode or off and can shut itself down, which is very useful for power saving. This is important as Logitech is only claiming three months usage and the MX610 runs off regular AA batteries rather than a built in rechargeable battery with a stand, so you’ll need a spare set of AA to hand in case you run low. You’ll have warning enough to buy a new set though if you don’t as there’s a light on the top of the mouse that indicates when power is low, and the SetPoint software also tells you. If you leave your PC on all the time then you can turn off the mouse manually, with a button and power light on the underside of the device. 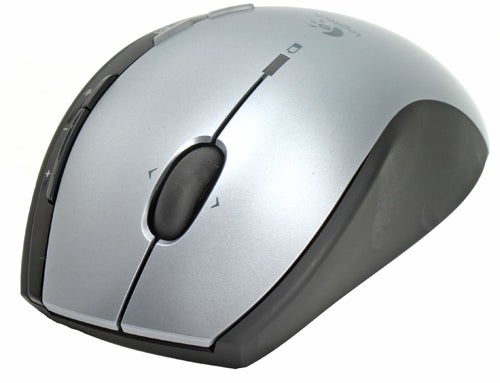 As well as being able to know the PC’s state, the mouse also knows when you’ve received an email or a message from a chat client, slowly flashing yellow for the former and blue for the latter. The lights also buttons so you can just press those to bring up the respective application. This functionality is available via Logitech’s SetPoint software, but the downside is that it’s limited to Outlook Express, Outlook and MSN Messenger or Yahoo Messenger. This was fine for me as on my work machine I use Outlook and MSN, and I found it really useful being able to call up Messenger from the mouse, without having to go into the task bar tray. However, I also use Thunderbird for my personal email, and that just isn’t supported, which is a shame. Equally if you use another chat client, such as AOL IM or Trillian, this feature won’t work, which is disappointing.

If you don’t want the light to flash for every piece of spam that falls into your inbox you can manually filter out messages to just the ones you wish using the SetPoint software. SetPoint also enables you to map the function of each button to what you wish. You can do this on an application basis, so you can tailor how the mouse works in your apps, which is a good thing. If an installed app doesn’t appear in the list you can add it by selecting Manage Programs. What I can’t understand is why the software doesn’t have an option to let you apply the same settings globally. I wanted to map cut and paste to the side buttons in all apps, but had to go into each program and do it manually – a real chore. 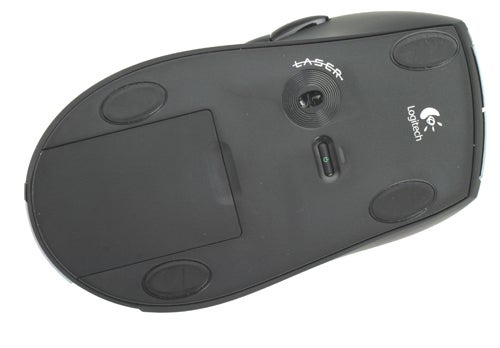 The top two buttons are also set quite high on the most bulbous part of the mouse so you have to remove your thumb and reach them, which is a little awkward. Towards the front of the mouse are buttons for volume up/down and mute. Being able to control volume this way without having to move to the keyboard is great, though I found that to reach the volume up button at the front I had to reach down a little. The side buttons, which default to forward and back are easily reachable from the thumb. Of course, it all depends on hand size, but generally I found the feel to be good, though not quite as good as the MX Revolution did (though of course the caveat with that mouse is that it’s right-handed so I couldn’t use it). 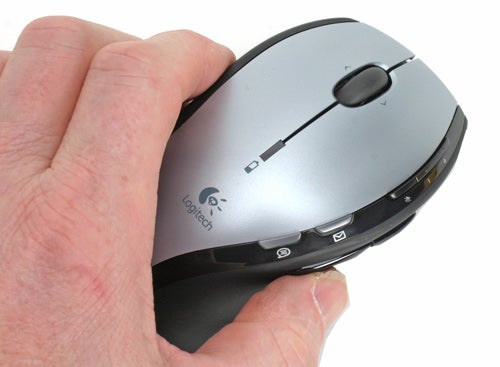 As well as the usual scroll and click, the mouse wheel can also be moved from side to side, useful for web pages and Excel. I found that it didn’t click as easily as my regular Logitech wired mouse and I work harder to get it to do so. I also had to alter the setting in the SetPoint software, which defaults the middle button to a zoom function, which I found a little odd – clicking is much more useful (e.g. wheel clicking links in Firefox launches link in new tab).


Of course many people will be wondering how good the mouse was in games. I tested with short sessions in Day of Defeat: Source, Counter-Strike: Source and a bit of Half-Life 2 single player. I found that mostly I needed to get some practice in, but I was satisfied that the mouse wasn’t really the problem with my lack of success. I still feel that hardened players of twitch games will be better served by a faster dpi mouse, which for left-handers will mean going wired. If you’re more of a casual gamer though, the MX610 will be acceptable.

Actually having a contoured mouse felt a little unusual to me but I quickly got used to it. Even though I use my on the left hand side of the keyboard I have always kept the left and right click buttons the regular way round. However, on this mouse I felt comfortable to actually switch it around, as the index finger is faster for doing those left clicks.


It may not be quite perfect but not having had the luxury of using a contoured mouse before, I have to say that I was very happy with the MX610 for lefties. Economies of scale inevitably dictate that the left-handed version will be more expensive than the right but thankfully it’s only a few pounds more. I can quite happily recommend the MX610 for left-handers and not just because there’s no other choice.