The humble mouse is an essential part of any PC setup, but most users tend to just stick with whatever rodent comes with their PC when they buy it. However, the difference between a bog standard mouse and the high-end pointing devices available is stark, and you would be amazed how much difference a good mouse can make. Of course having a good mouse to navigate Windows will definitely aid your productivity, but if like me, you’re a serious gamer, having the right mouse can mean the difference between life and death. 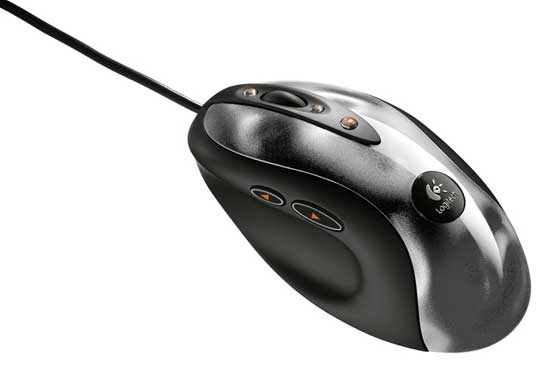 Wireless keyboards and mice have become more popular than ever, partly because the prices have dropped considerably, but also because they are far more reliable than they used to be. However, for me, a wireless mouse is just not good enough for gaming – I can always feel a slight lag when playing with a wireless mouse, and once again, this could be the difference between living and dying; or more importantly, gloating or sulking.


So, it comes as no surprise that you’ll always find a wired mouse attached to my main gaming PC. What is surprising though, is that until recently, the wired mouse that I used was a very basic Microsoft model, rather than a specific gaming model. The reason for this is that I have pretty small hands, and I’ve always found gaming mice to be a bit to bulky for swift movement in the thick of battle. So it was with some trepidation that I hooked up the Logitech MX518 gaming mouse, but now that I’ve used it for a few weeks, I don’t think I’ll ever want to let it go. 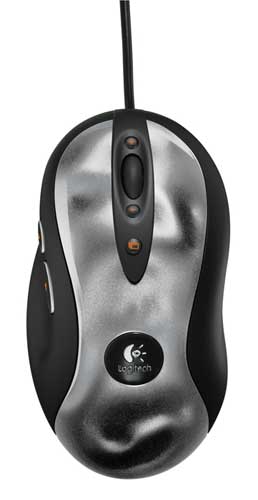 There are a number of reasons why I love the MX518, not least of which is its size. Not only do I have small hands as I already mentioned, but I also use a mouse very differently to most people. Whereas the majority of mouse users will hold the device in their hand and move it around from the shoulder, I rest the heel of my hand on the desktop and move the mouse with my thumb and ring finger. Using the mouse in this way means that it has to be small enough to move freely under my hand, while the sensitivity also has to be high as the range of movement is limited.


Now, I’m not going to suggest that everyone should start using a mouse the way I do, because the traditional method is far more ergonomically sound. I know this for a fact since I suffered from a terrible bout of RSI induced tendonitis last year – a direct result of how I use a mouse. So now, I try to use a mouse like “normal” people when navigating Windows, but I still can’t change my ways when it comes to gaming.

With the MX518 being small enough for my quick movement method when playing games, it’s made it over the first hurdle with flying colours, but there’s so much more to this mouse than its size.


From a gaming point of view, the 1600dpi sensor found in the MX518 will be a real draw for anyone wanting to improve their frag count. Now I didn’t realise just how clumsy the movement on my basic mouse was until I started using the MX518. Playing my game of choice, Counter Strike: Source, I found that I could zero in on targets from a distance far more easily. This was obviously due to the face that I could move my crosshair with greater sensitivity and ultimately grab more of those kudos enhancing headshots. 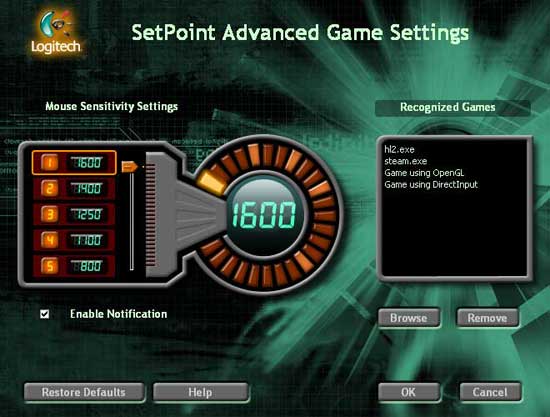 But the MX518 isn’t just about ultimate sensitivity, it’s also about flexibility. Using the bundled Logitech application, you can pre-program five different sensitivity settings and switch between them at the touch of a button, while you’re playing your game. Located just above and below the scroll wheel are plus and minus buttons – these will switch up and down between your customised sensitivity settings. With this in game adjustment, you can work out what the best sensitivity is for each weapon in your arsenal, giving you that extra edge.


The standard left and right mouse buttons have a gentle action, but still respond with a reassuring click. The scroll wheel is, of course, invaluable both when playing games or using Windows applications. Unlike the latest Microsoft mice, the MX518’s wheel is still “notched” rather than smooth moving. Personally I prefer the notched action and Logitech has made this feature even more usable by allowing you to dictate how many lines you want each notch to scroll through a document – you can alter the scrolling in the supplied utility. 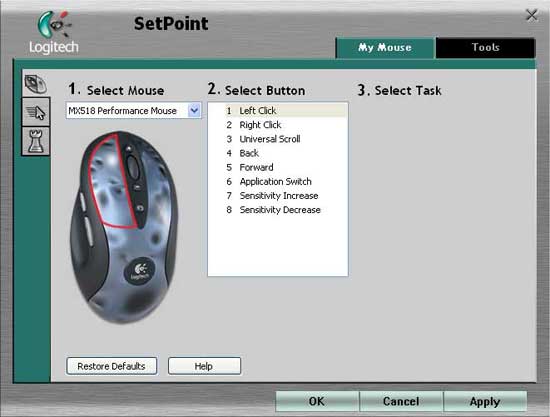 As mentioned earlier, the scroll wheel has plus and minus buttons above and below it, but there is another button even further back in the centre. This is the task switching button and once you get used to it being there, it will seriously increase your productivity in Windows. Whereas you normally have to bring your mouse pointer to the bottom of the screen to select between active windows, or use Alt + Tab to toggle through them, pressing the task switching button brings up a list of open windows directly under your mouse pointer. It’s then simple to select the window that you wish to switch to, with the minimum of fuss.

Falling directly under your thumb are forward and backward buttons. These aren’t uncommon on mice these days, and they allow you to skip backwards and forwards through Web pages or document folders without having to move your pointer to the menu bar. Of course when I say that these buttons fall directly under your thumb, I mean that they fall directly under my thumb – if Benny were using this mouse it would be a different matter altogether. What I’m getting at here is that the MX518 is primarily aimed at the right handed majority of the world population, and yet again, left handers like my Deputy Ed will have to either adapt or look elsewhere. 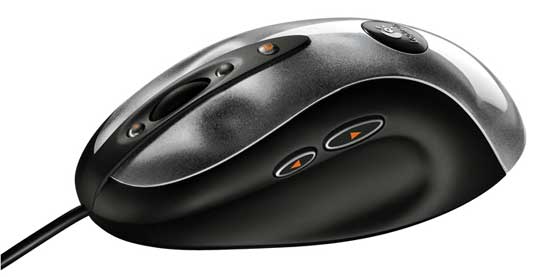 I haven’t touched on aesthetics yet, but if you are concerned with how good your mouse looks the MX518 is unlikely to disappoint. Finished in black and silver, the central part of the body is covered with what looks like dents. When you come to hold the MX518 though, you realise that the indentations are an optical illusion and the mouse surface is smooth. I’m not sure what the indentations are supposed to represent, but it certainly adds some style to what most users consider to be a function over form bit of kit.


In the box you’ll find the MX518, along with a USB to PS/2 adapter and the software disc. It doesn’t sound like a lot, but it’s pretty much everything you need.


One word of warning though. Don’t expect to suddenly be a better player once you plug in the MX518, in fact I actually found myself to be worse when I first started using this mouse. It really does take a bit of getting used to, and you also need to configure the best possible sensitivity for each game you play. Once I started to feel comfortable with a new weapon in my hand, I found myself nailing kills that I didn’t think possible and tracking enemies with greater accuracy and speed. 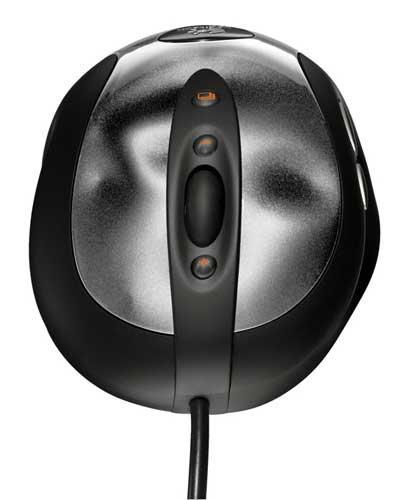 Of course all high-quality products carry a price premium and at £37.60 the MX518 is far from cheap, especially for a wired mouse. But in my opinion it’s worth every penny and if you’re serious about your gaming, and want to increase your Windows productivity you should give this mouse a try.


At last, a gaming mouse that I can use. The size is perfect, the performance is exemplary and the software simple and effective. The Logitech MX518 is the best mouse that I’ve ever got my paws on.