About three months ago I did a mini round-up of iPod speakers, but while each of them were portable, none of them were really suitable for travelling light. If you want something to supply tunes in a hotel room when you’re on the road, you’re probably not going to want to pack the iPod Hi-Fi into your bag. That said, what’s noteworthy about the mm32s is that they are not designed exclusively for iPod’s – you can also use them with any other brand of player, though inevitably it’s the iPod that has influenced the design and styling.


Build quality isn’t the best. It needs to be light as it’s portable but I wouldn’t be confident of it surviving too heavy a fall. The volume buttons on the front also had too much flex for my liking. 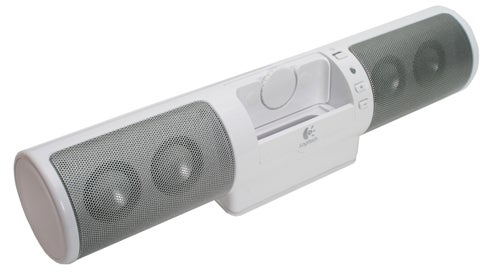 There are two speakers drivers on each side, and the only buttons on the facia are a power button and plus and minus volume controls. The set can be powered either via the AC adaptor, or via four AA batteries which Logitech rates at giving 10 hours playback, which is reasonable. When unplugged it does make for a very light and portable unit, though you still have cables dangling for reasons I’ll explain in a moment.


The dock area sits in the middle but I was surprised to find that there wasn’t an iPod dock connector present. Instead there are holders for the various types of iPod, (Video, mini, nano) and into these you are meant to fit the cable that came with your iPod. For players that aren’t iPods you just place them in without using the dock. To make your player sit firm you bring the backrest closer by turning a dial, which is a bit fiddly. 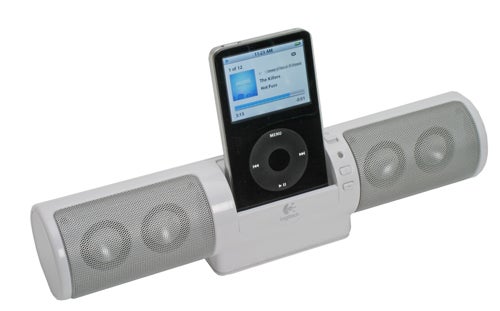 
With the sound coming from the external cable the only reason to place your cable into the iPod docks is to be able to sync and charge without having to move the iPod from the speakers. There’s a cut out on the base of the unit for running the iPod cable but with the power cable, the sound cable and the iPod cable, it all makes for a cluttered mess.

This presumes though that you’ll have these speakers out on your desk for most of the time, but if you are going to have them in one place, then you might as well get a set that sound better than these.


Certainly with some types of music the mm32s make a very decent fist of it, even at higher volumes. It particularly suites gentler more vocal types of music but due to the size of the speakers the mid-range is quite thin and the bass, while detectable can hardly be described as full. 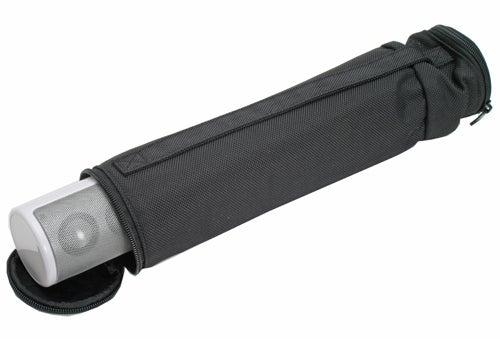 This rather thin sound meant that it was actually quite tiring to listen to after extended periods. I find that the better the speakers the more natural the sound, the easier and more pleasurable it is to listen to it but the mm32s were hard work.


I also found that that despite the iPod being held firmly in place and the connection solid, there was occasions when the sound would crackle and the volume fluctuate for no apparent reason. 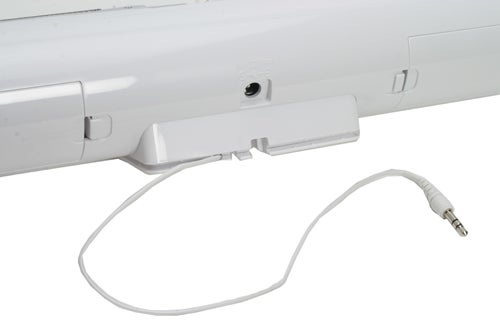 Logitech does include a cool carry case for the speakers, which a compartment at the top for space batteries and cables.


Perhaps I’m being a bit harsh on what is a very affordable set of speakers, which can be picked up for only £35, but in this case even that seems a bit over the odds for what you’re getting. For portable iPod speakers, Altec Lansing has more elegant designs, such as the InMotion IM5s and IM7s, though these are considerably more expensive and if you don’t have an iPod there are plenty of alternatives. My overall impression is that the iPod dock has just complicated this set of speakers rather than helped it. As such, I’d spend less and look for a set of speakers that don’t have an iPod dock feature 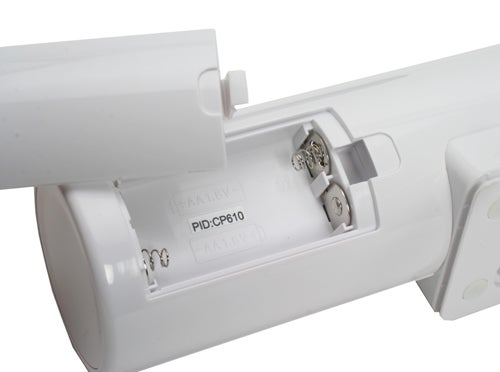 
The mm32s are light and portable and as they are not just for iPods they’re versatile too. However, while the sound quality is adequate in the main, the design is messy and the build quality lacking, so this wouldn’t be the portable set I’d go for.