Logitech has a penchant for designing multi-device peripherals for desk-dwellers who don’t want to clutter their workspace. The MX Master mouse from 2015 was one of the finest examples of this, and the new K780 is a complementary addition.

The K780 is one of the best-looking keyboards I’ve seen in some time. I wouldn’t go as far as to call it a piece of art, but it’s certainly pleasing. The matte-black keyboard tray sits atop a soft-touch, grippy, speckled white plastic, which provides a gutter to hold a tablet or smartphone. 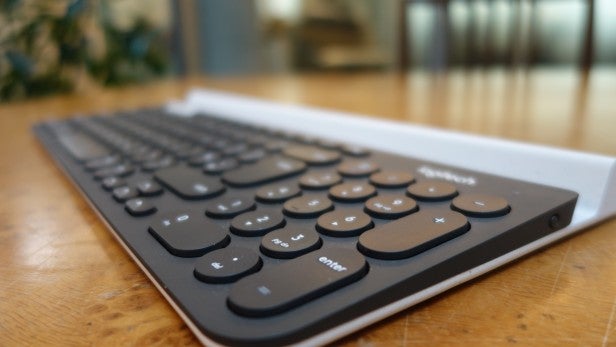 It will fit any regular-sized phone and tablet, including the 12.9-inch iPad Pro, with devices feeling reassuringly stable in place. Even the large Microsoft Surface Pro 4 didn’t feel in danger of toppling over with the occasional forceful prod of the touchscreen.

The keys themselves are typical compact keyboard fare from Logitech, taking the form of circular pads coated in the same grippy material as the keyboard tray. I was disappointed to find the keys themselves aren’t backlit, and instead the characters are stuck on. I’ve found that with prolonged use, stickered keyboards tend to start wearing off after a few years. Etched key symbols would have been welcome, especially on what is a fairly expensive wireless keyboard.

Key travel isn’t particularly long, but this isn’t unexpected for a compact keyboard. The action is fairly positive, although it could be slightly clickier. There’s just a hint of mush when you press down, but it didn’t slow down my typing. In fact, switching away from a mechanical keyboard I felt my typing speed actually increase.

There’s also a full-sized numberpad, which is very welcome addition. 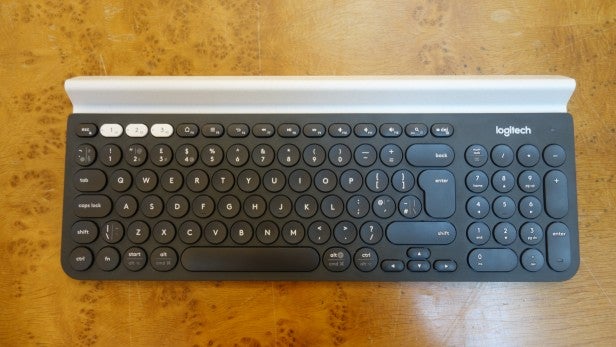 Neither the Caps Lock nor Num Lock keys receive an indicator light, although this may be a technical limitation because the keyboard can switch between multiple devices. If you have Logitech Options in Windows, you’ll receive a brief on-screen pop-up when you activate them, but that still requires you to press them in order to check.

The wider keys, including the left-hand row that includes Tab and Caps lock are lozenge-shaped, while the return key looks like a very small speech bubble. It might be a bit cutesy for some, but I think it’s stylish.

The pitch of the keyboard can’t be adjusted and is held up by four small rubber feet. These are incredibly grippy and maintain the position of the keyboard on a desk rather well.

The K780 is powered by two AAA batteries that are included in the box. These are inserted into a panel on the underside of the keyboard. It’s beneath this panel that you’ll also find a Logitech Unifying Receiver dongle. You should definitely use this on any device that has a full-size USB port – in my experience, it offers a much more reliable and lag-free connection than connecting via Bluetooth.

Devices vary, but my Gigabyte laptop didn’t play well with the K780 over Bluetooth, resulting in a huge build-up of missing characters if I typed too quickly in certain programs.

Using the Unifying Receiver requires the use of Logitech’s Options software, which you’ll want anyway if you plan on making changes to your K780’s settings.

I didn’t experience the same issues connecting over Bluetooth to a phone or tablet, however, so these problems are most likely down to computing hardware, not the keyboard itself.

Pairing to a new device is easy: you simply hold down the F1, F2 or F3 buttons until their respective lights flash rapidly. At this point, the keyboard is in Pairing Mode and will be visible to all nearby devices. Complete the connection on that device and you’re ready to go. 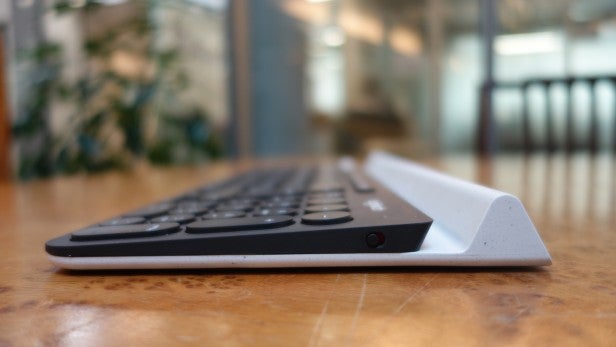 To switch between devices simply tap the relevant key, and you’ll immediately be switched to that device.

The problem with having a keyboard designed for all sorts of devices is that the button layout can get a little messy. The Start and Alt keys also have secondary Alt and CMD buttons for Apple devices, and the “@”, “2”, “`”, “#” and right Ctrl keys also have secondary functions for MacOS. It makes sense for those who are using both an Apple and a Windows device, but for most they’ll be wasted stickers.

If you connect to a Windows device, you should hold down Fn+P after connecting to tell the keyboard to send Windows commands, and FN+O if it’s a Mac.

The top row of keys doubles as F-keys (accessed by holding down Fn) and various function keys. There’s a browser Home button, a right-click equivalent (in Windows) and media control and volume keys, as well as a search button that brings up Cortana in Windows.

The top row is also where you’ll find the Delete key. Weirdly, there’s no Refresh button here, which is arguably a more useful shortcut key than right-click – although on Android that button brings up extra menus, which is useful. 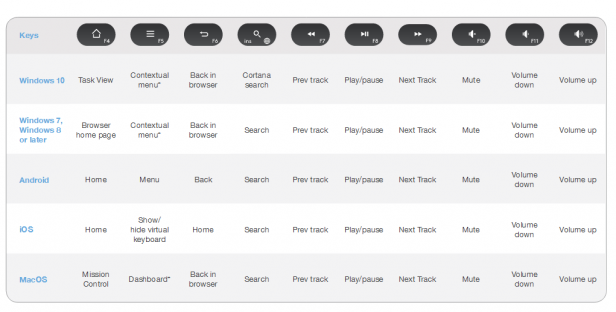 Battery life is rated at two years, although Logitech doesn’t state how much typing per day that involves. Having used the keyboard every work day for two months, the battery indicator in Logitech Options hasn’t changed, which is a good sign. Still, make sure you have spare AAA cells because the K780 doesn’t have a USB connector.

Should I buy the Logitech K780?

For those simply looking for a keyboard to control a single device, the K780 is overkill. Its array of buttons and slightly weird top row of keys means it isn’t the best choice; a more conventional Logitech wireless keyboard will suffice.

If, however, you’re a multi-tasker working on several machines simultaneously, it’s a brilliant piece of kit for not a huge amount of money. After all, you’re buying one keyboard where before you might have bought three.

The Logitech K780 is the ultimate keyboard for multi-taskers.