Fresh
from the major rebranding announced earlier this summer, Logitech has
hit IFA 2015 with a pair of products that neatly demonstrate the
company’s new philosophy.

Having glanced at the picture above,
you might be left a little baffled by the previous sentence. After all,
there’s nothing out of the ordinary about Logitech launching a new
desktop set. However, the K380 Multi-Device Bluetooth Keyboard and M535
Bluetooth Mouse symbolise exactly where the company is right now.

First,
the keyboard. It’s a funky-looking number, which you might not
necessarily expect when you first read its name. It features curved
corners, rounded buttons and it’s available in a blue and teal colour
scheme. I’d recommend keeping this particular model well away from the
boardroom, where the smarter-looking black and yellow version may be
more suitable. Being a dangerously casual rapscallion myself, I’d be
happy to use either model anywhere. 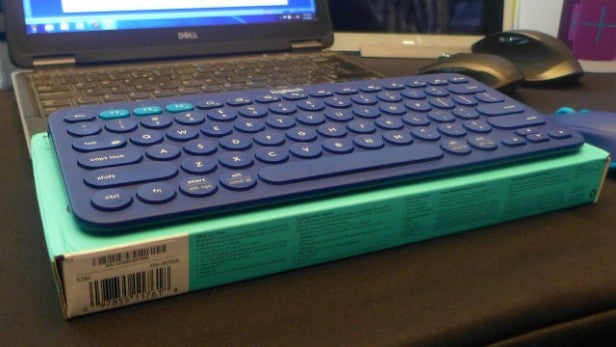 Thanks
to its compact profile, you can pretty much do just that. The K380 is
279mm wide and 124mm thick, which is small for a keyboard. It’s a little
chunky, though – 16mm at its thickest – although you should still be
able to squeeze it into a heavily loaded backpack if you plan on working
outside in the sun, for example.

Despite being made of plastic,
it feels durable and pleasantly weighty, tipping the scales at 423g.
That’s with two AAA batteries inside, which incidentally should keep the
K380 powered for up to two years.

Despite its petite
measurements, the K380 is comfortable to type on. In general, each
individual key is well positioned and sufficiently large, though the Return key is on the small side. My biggest criticism is that the keys
don’t offer a great deal of travel, which can disrupt your flow.

As its name suggests, the K380’s killer feature is multi-device support. Like the Logitech MX Master,
you can connect the K380 to up to three separate devices at once,
jumping from one to another (and another) by pressing one of three
distinct ‘Easy-Switch’ buttons in the top-left corner of the keyboard.

That’s
not all, though. The K380 plays nice with a lengthy line of different
operating systems and device types. So whether you fancy drumming out a
long message on your iPhone or typing up a list on your Android tablet,
the M380 will serve you well.

The full list includes devices
running Windows 7 and upwards, Mac OS 10.10 and upwards, Chrome OS,
Android 3.2 and upwards and iOS 5 and upwards. Logitech’s even showing
some love to Apple TV.

Like its desktop neighbour, the Logitech
M535 Bluetooth Mouse comes in a fetching blue and teal colour scheme,
though a grey and yellow version is available as a low-key alternative.
It’s on the small side too, at 100.5 x 61.1 x 33mm, which should serve
as a warning to large-handed potential buyers.

I only have little
mitts, but feel that the M535 is just large enough to deliver a
comfortable user experience for me. The curves and textured rubber trim
definitely help, as does the fact that the rear end of the mouse is
raised far higher off the desktop than the front end, keeping your hand
in a natural position. 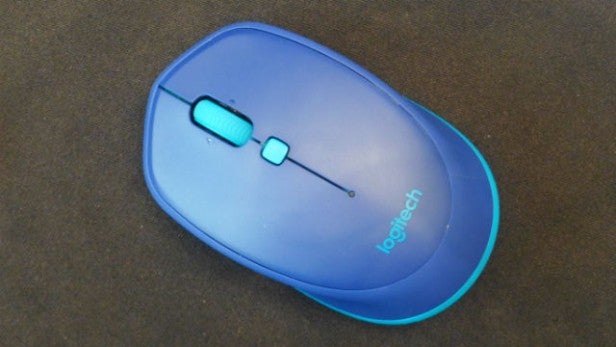 Thanks
to the laser-grade optical sensor, you should be able to use it on
almost any surface, including metal, tile and wood. It’s not quite as
all-embracing as the K380, however, offering support for devices running
Windows 7 and above, Mac OS 10.8 and above, Android 3.2 and above, and
Chrome OS.

In use, it’s light, zippy and responsive, with the
left- and right-click buttons offering the ideal level of resistance.
The tilt wheel also works as it should.

Right next to it sits
the mouse’s own special feature: the navigation button. This little
thing allows you to emulate the many gesture controls you can find on
modern computers. After programming the navigation button through the
Logitech Options program – which you can also use to tinker with the
keyboard’s settings – you’ll be able to switch between apps and
desktops, drag and drop files, head into Task View on a Windows 10 PC or
bring up Mission Control on a Mac.

A single AA battery should provide enough power for up to 10 months of use, which should keep most users satisfied.

Altogether,
the Bluetooth desktop set will cost £80 when it launches later this
month, though you’ll be able to pick up each individual piece for
£39.99.

Both the K380 keyboard and M535
mouse show off the ‘new Logitech’, which is focused on design and
determined to cater to more than just computer users. In terms of
features, looks and value for money, Logitech seems to have hit the nail
on the head.