We often extol the virtues of buying yourself a decent keyboard (and mouse, and headphones, and monitor, etc.) regardless of how slow your PC is or how little you use it. This is because we feel the most important thing you can do to make using a computer more enjoyable is to make interacting with it as comfortable and effortless as possible. On occasion, though, it’s also nice to make an upgrade just for the sheer hell of it or, as is the case here, because something looks pretty.


The Logitech Illuminated keyboard, then, is an elegant slim-profile keyboard that, as the name suggests, employs backlit keys to both add a touch of flare to your desktop and make it easier to type in low light conditions. The latter factor being of particular interest if, like us, you spend many an evening working long into the night. 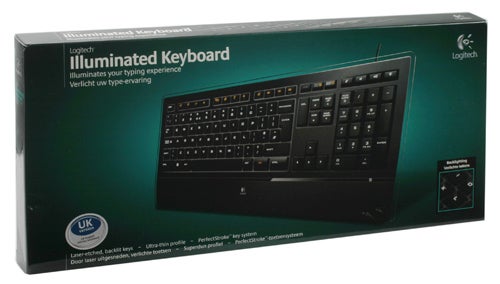 As soon as you take it out of the box, this keyboard has a quality look and feel to it. Although it’s an entirely plastic affair the main chassis is strong and sturdy and the finish is exemplary. In particular, the soft-touch plastic wrist rest feels nicer than the harsh plastic of some cheaper keyboards. That said, in terms of comfort, it’s not a patch on models that feature a proper cushioned wrist rest, like the Logitech Wave. 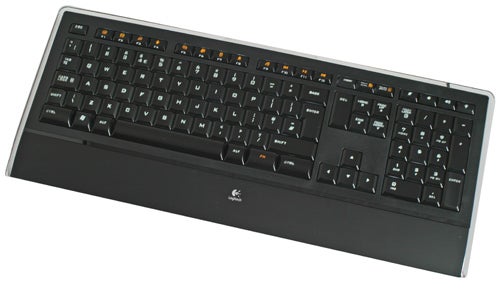 A clear plastic strip runs round the top and sides and a complementary strip of glossy black plastic bisects the keyboard between the keys and wrist rest. Together they add a touch of class that few other keyboards can match at this price. Embedded in the glossy plastic are the Num Lock, Caps Lock, and Scroll Lock notification lights, which are invisible when not illuminated, further adding to the keyboard’s stylish minimalist appeal.


Looking at the keyboard side on, you can see just how slim it is. At its thickest it’s just 9.3mm and the front is tapered so as to be almost flush with the surface it’s sitting on, which some people find gives a more comfortable typing position. I can’t say it works for me, now that I use a Microsoft Natural Keyboard with its split full-size keys, raised cushioned wrist rest, and sloping middle. However, this keyboard certainly feels no more uncomfortable than any other low-profile, straight keyboard I’ve used.

That said, it does have one oddity that could prove an annoyance for some. The bottom row of the main section of keys is slightly raised. I can dream up all sorts of semi-logical reasons why this might be useful – to distinguish the row to make it easier to touch type; to compensate in some way for the angle of the keyboard; to prevent accidental key presses – but none of them seem to hold up. Overall, it just feels slightly odd. If you’re not sure what I mean, the video review demonstrates this nicely.


A further complaint we have with regards the typing position and feel is the little feet that raise the back of the keyboard up, which simply aren’t long enough. Consequently I found the angle of the keys to be too shallow. Again, it’s not a deal breaker but it does limit the appeal.

Despite the aforementioned slight problems, the general typing experience is very pleasant with the keys’ short stroke and snappy response making fast touch-typing a breeze. It’s not the best low-profile keyboard I’ve ever used – that honour still goes to the Enermax Aurora but it is good nonetheless. Also, the quiet operation will further appeal to those who want a practical late-night working tool or simply don’t want to drive their co-workers mad with a clickety keyboard. 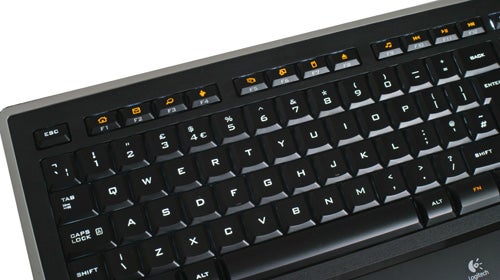 For the most part the key layout is completely conventional, though there are a few minor changes. The Del key is double height (a feature some of us in the office found to be welcome), which results in the Insert key being placed on the top row and the Scroll Lock function being tacked on as a secondary function of the Pause/Break button. 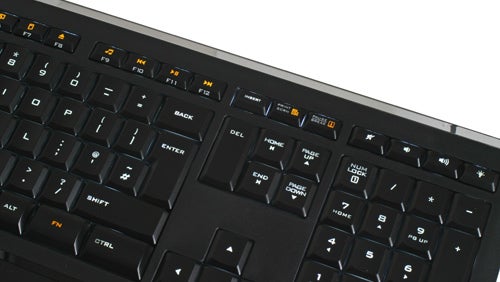 The right-hand Menu button has been replaced by an Fn key for activating the Function keys’ secondary functions, which include things like media controls and quick launch shortcuts. An extra row of keys sits above the numpad, with the far right one used to control the all important backlighting. 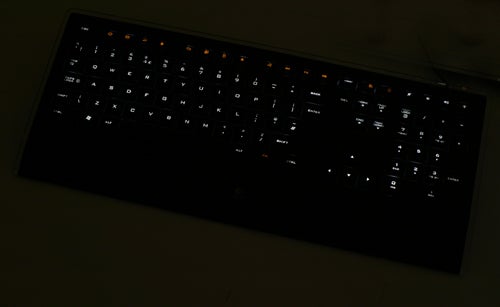 The backlighting has four intensity levels, which should provide enough choice to ensure you can always find a good balance between being able to see the keys and being distracted by them.


In daylight, you’d be hard pushed to notice if the backlighting is on or off (at any of its intensity levels), as the markings on the keys are only semi-translucent and the LEDs are of fairly low brightness. At night, though, the effect is quite striking. 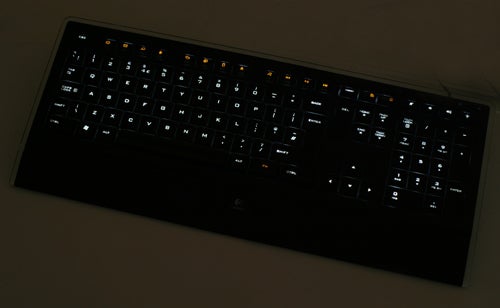 The keyboard connects over USB, which also provides the power for the lights. Unfortunately Logitech hasn’t taken this as an opportunity to extend the Illuminated Keyboard into a USB hub so you’ll be losing one rather gaining a number of USB sockets.


Ultimately, the Logitech Illuminated keyboard does precisely what you expect and for the most part it does it well, bar a few minor niggles. Certainly it fits the ‘lifestyle’ product mould to a T. However, even though £50 isn’t an exorbitant amount of money to spend on such a keyboard, there are certainly far more comfortable, feature-rich, and better performing keyboards to be had for the money.


The Logitech Illuminated Keyboard is stylish, well made, and is a decent enough typing tool. However, there’s no denying you pay a premium for the fancy backlighting and lose some features and comfort in the process.