We live in a complicated age, and nowhere exemplifies this more than the average lounge. While media centres PCs promise the ability to cut down on the number of boxes under the TV, for most people there’s still a fair bit of kit living there, ranging from DVD players to set-top boxes and even dusty old VCRs. Controlling all of this is always a bit of a challenge and this is where something like Logitech’s Harmony Remote 895 comes in. Instead of having to sift though a sea of remotes you only have to pick up one. In my house there’s a cupboard in the lounge full of toys for the kids with a draw reserved for my various remotes – the wife refers to it ‘Daddy’s toys drawer’. 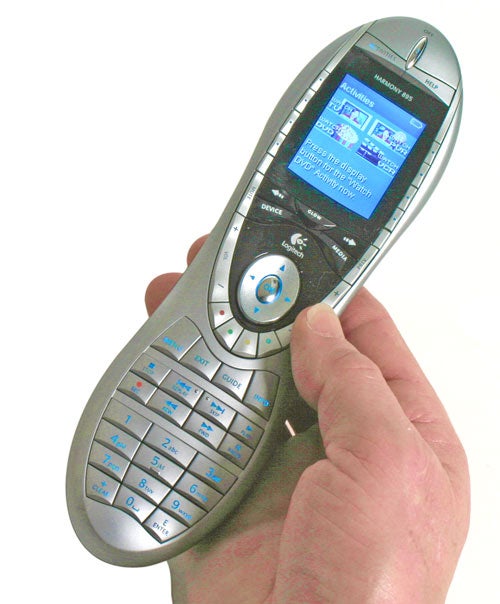 Logitech is soon to release its top-of-the-range Harmony 1000 unit, but while I wait to get my hands on one of those I thought I’d take a look at the next one down – the 895. What this offers over the 885 is RF – making it possible to use even without line of sight. A RF base extender is provided and IR connectors, so you can theoretically control up to eight devices from each extender.


While the 1000 is a larger oblong affair, the 895 essentially looks like a regular remote on steroids. In the past I’ve looked at the budget 525, but was put off by the fact that it didn’t feel comfortable to hold, the buttons were too rubbery and the mono screen was uninspiring.


All of these flaws are remedied by the 895. Its curves sit comfortably in the palm and the buttons are larger and firmer. There’s also a large colour screen at the top, which though it’s fairly grainy and dull compared to what you might get on say, a mobile phone, it’s far better than the mono 525. The remote also has a backlight that can be set to activate automatically when you pick up the device – a very neat feature that’s perfect for use in the dark. 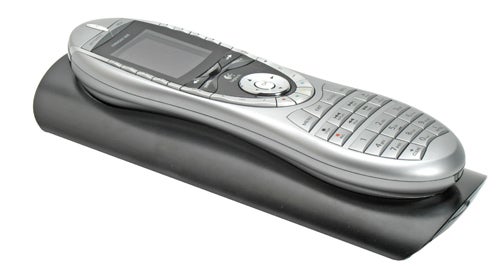 The 895 charges via a stylish, curvy cradle complete with a pointless but inevitably de rigueur circle of blue light in the centre. Frustratingly though, my remote sample wouldn’t sit firmly inside the cradle with the pins connecting and disconnecting causing it to repeatedly beep. After careful positioning it did sit neatly and charge but it gets marked down in the build quality stakes for this.


What really makes Logitech’s Harmony range tick though is the included software. This provides access to a huge range of control codes for devices. You tell the software what equipment you have, which means getting down and dirty with the precise model numbers, and it then pulls the information from its extensive database. You then plug the remote in via USB and the data is transferred over to the remote. The good news is the database is very extensive and you’d be hard pressed to actually own something that isn’t on there – and of course grows over time. It certainly had no problems with any of my kit – the hardest trick is knowing which category to search in.

Once you have all your kit on the remote, you can if you want control it all individually – pressing the Devices button will display each one you have, and you choose the one you want to control by pressing the adjacent button running down the side of the screen. The various functions are then shown on screen and you select the one you want by again pressing the corresponding button. A generic list of codes are downloaded to the remote, meaning that you have to scroll through a huge number of controls using the arrow keys below the screen, even though many of them won’t be relevant for your device. This can be fully customised by the software though. 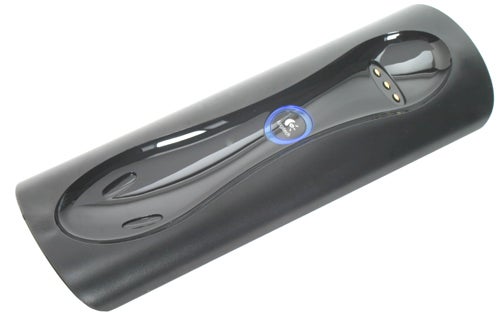 Once you’ve added each of your devices to the remote, you can control each of them. However, the fact is that having to control each device in turn from one handset is in many ways less convenient than having the individual remotes laid out in front of you. It’s just awkward having to switch between them using the ‘Device’ button, which could be larger and better placed. However, this isn’t really what a device such as this is about – the Activities button on the top is really the main attraction, more on which later.


Of course, the main controls, such as Play/Pause/Stop etc. will map directly to the physical buttons on the remote. The good news is that there are enough of these to make it feasible to really ditch your main controls. I have owned a large and now very classic Sony RM-AV2000 LCD touch screen remote for about seven years, and while it was possible to map everything to the device if you persisted long enough, it just wasn’t ergonomic enough to replace my Sky controller. However, the 895 is. It’s still not as naturally intuitive as a well designed remote such as Sky’s, but it is feasible – and worthwhile doing just to keep that remote count down. 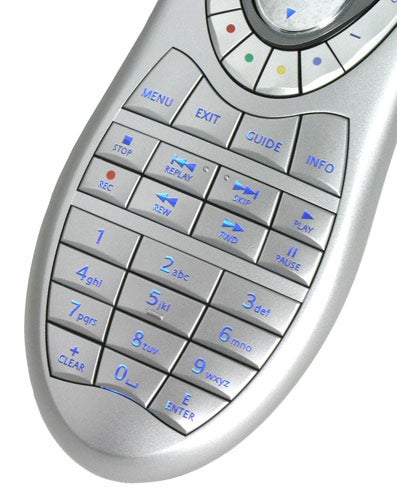 Key to this is the presence of physical, ‘Guide’, ‘Info’ buttons and Red, Green, Blue and Yellow buttons, while the central select button and the directional pad around it work as you would expect. However, some of these buttons, particularly the colour coded ones are just too small so you have to look down to check what you’re pressing. It seems these buttons are small just to maintain the symmetry of the device – a classic case of form over function.


As I said earlier, the most important button is really the one labelled ‘Activities’. Using the PC software you can create a macro, which let’s you press one button such as ‘Watch TV’. This will then switch on each device in turn, and set each to the correct input automatically. If necessary you can tweak things to get them just right, such as delaying a signal so that one device comes on before another. The remote is also fairly intelligent in that if the surround speakers are turned on as part of the Watch TV macro, the physical volume control on the handset will then control the volume of that, rather than the TV. However, once you switch to a device manually, it ‘forgets’ to default to the surround speakers and goes back to the TV speakers.

It’s not flawless and it sometimes gets it wrong, such as when it assumes the equipment is in one state when if fact it’s in another, but the on-screen help will sort things out. Though it really does work well most of the time, occasionally it can really get its knickers in a twist so it’s worth having a draw with those original remotes somewhere close, rather than retiring them completely to the garage.


The other issue is that adding and downloading changes to the device is actually fairly tedious. This is down to the fact that the Harmony software is rather slow – with it taking several minutes to apply even the smallest changes. It can also be somewhat confusing at first but the more you use it the more familiar it becomes. I did for some time wonder what Z-Wave devices were – these are devices that adhere to an open protocol for controlling devices in the home such as lighting – but it’s hard to find this explained in the software itself. 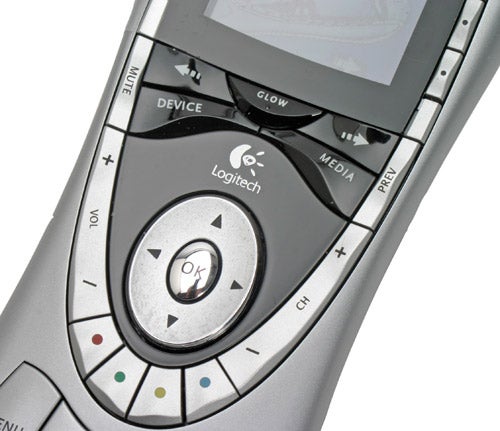 An even bigger flaw is that nowhere in the supplied manual, or in the software itself, is it explained how to get the supplied RF extender device working. The RF device has to be paired with the handset, and the changes you make on the remote also have to made to the extender. The extender also cannot be plugged in when updating, which could make things very awkward if you’ve got the extender in a difficult to reach place, which is likely.


All of these issues were rendered moot by the fact that in the time I had allotted for this review I could not get the software to update the extender, which was quite frustrating. The software just kept failing. This means that essentially I was missing out on one of the main features of the 895. I have read several forum posts of some having issues getting the RF to work properly, while others have reported it working flawlessly. This, in combination with the issues I had with the charging indicates to me that despite being available for a while, the 895 is still somewhat rough around the edges. I will continue to try to get to the bottom of the issues and will update the review accordingly if there is any progress. 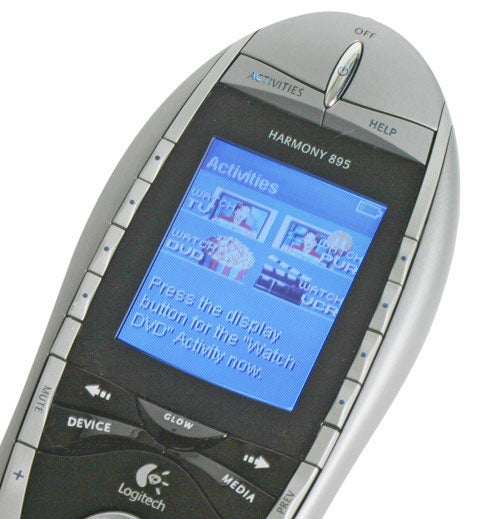 As it happens, I currently don’t require RF as all my kit is out in the open, and once I was passed the pain of set-up, the 895 proved very useful indeed. On that basis it’s a good investment, though if you don’t need to the RF or control for Z-Wave devices the cheaper 885 is a better choice.


The Harmony 895 is a powerful universal remote that lets you take full control of all your devices from DVD to lighting. However, you do need patience, as getting the set-up just right is time consuming. I also had issues with build and the RF functionality on our review unit didn’t work, leaving me very impressed and very disappointed in almost equal measure.