Things were much simpler back in the old days. You had one TV, one remote and probably, a video recorder. Two remotes. Life was simple and we were happy.


It’s all different these days. As well as our TV, we have Sky + boxes, Freeview boxes, DVD recorders, Media Center systems, separate surround sound systems, and Scart switch boxes. Nightmare. The remote controls take up so much space we’ve got nowhere to sit, and its all so complicated that it’s usually easier to go read a book than work out how to watch the news. 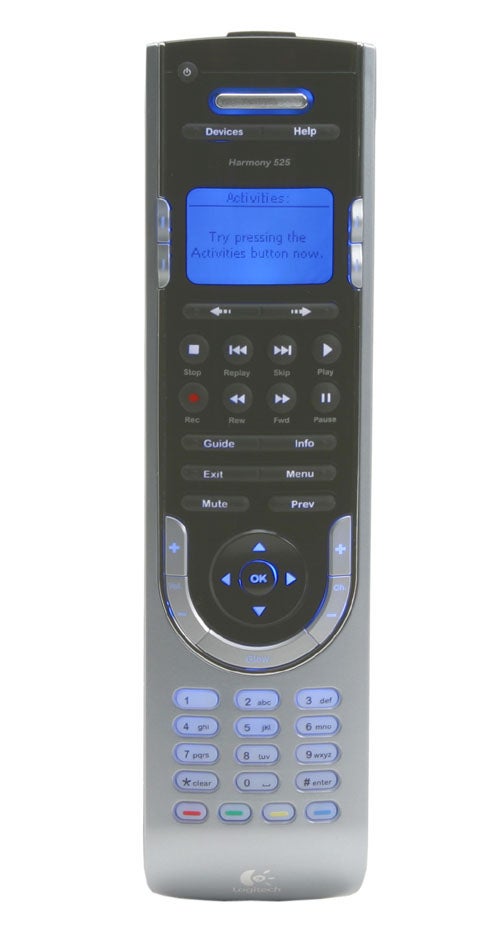 This is what spawned the concept of the universal remote, the idea being that instead of having to take your pick from a table full of remotes you could have one to rule them all. Your ‘precious’, so to speak. Of course not all universal remotes are born equal. While some are relatively simple others are huge and complex and usually sport large full colour LCD screens, which tends to bump the price up somewhat.


Logitech however, has a range of more accessble universal remotes under its Harmony brand and the 525 is its most affordable unit yet.


It sports quite a different look to the other remotes in the range, but despite its price it’s arguably the smartest of the lot. Certainly it looks eye catching lying on the coffee table. When you pick it up it has a good weight in the hand and is balanced well by the battery compartment at the base, which contains four AAA batteries. A set is already housed inside the unit and a spare set is included too, which is generous. The inexpensive nature of the product is only apparent once you start pressing some of the buttons, most of which are soft and spongy. Some are better, notably the direction control in the middle and perhaps most crucially, the volume and channel changing controls.


There is a backlight so you can see what you’re pressing in a darkened room, but only once you’ve found the ‘Glow’ button in the dark. Not surprisingly at this price there’s no motion sensor to activate it automatically when you pick it up. 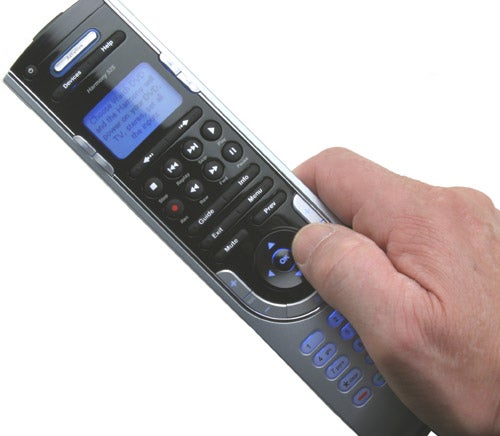 There’s a small LCD screen towards the top. Inevitably, not all of any given device’s controls can be mimicked in the hard buttons, so you’ll need to use the arrow keys beneath the screen to scroll to the control you need, selected by corresponding butotns round the screen. A USB port sits at the top centre, while at the opposite end is the learning infra-red port used for capturing any commands not in the Harmony database.


To start off you need to install the software supplied in the CD and connect up the device to your computer via USB. The software then connects to the Harmony web site so a convenient and fast broadband connection is something of a prerequisite for this device.

The first thing you need to do is register online, which is something of a pain. One advantage though, is that once you create a profile information about your set-up is permanently stored so you can access it and update the remote from any browser and PC. The first thing the software did was to download and update the firmware on the remote. You then tell the software what components you have. The more detail you know about them, such as the precise model numbers, the better and it will be useful to have all the original remotes to hand in case you need to teach the 525 a command that isn’t in the online database.


As well as being able to switch between devices the 525 has a button at the top called, ‘Activities’. From here you can access specific pre-defined tasks, so that you it can do several things at the touch of a button. So if to watch TV your setup requires you to turn the on the TV (obviously), making sure it’s on the correct input, turn on your AV Receiver on a particular input, and turn on the Sky box, you can do that pressing two buttons, instead of fifteen. 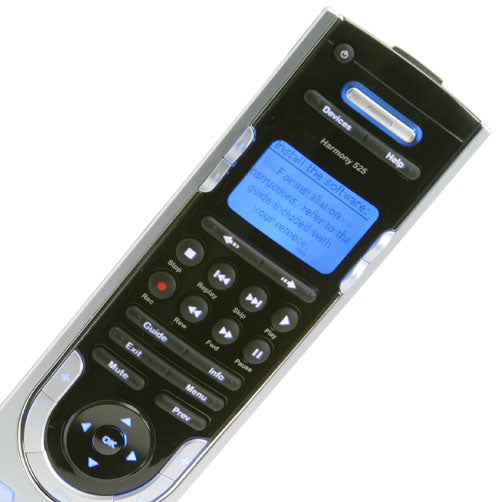 The initial software wizards are very good, and I was quickly able to set up a basic Activity for my TV, Sky box and speakers.


The downside to this is that the controls are only as good as the database. My surround system is a venerable set of Videologic DigiTheatre DTS speakers. I use the optical out so the speakers have to be set to that input to hear anything. While the DigitTheatres were in the database, it turned out that the in the database, the inputs were incorrectly labelled. On the device the Optical, Coaxial and Analogue are marked under a heading called ‘Inputs’ – but in the Harmony database the label, ‘Input’ was actually entered as a setting. This meant that the whenever I performed the Activity ‘Watch TV’ the wrong input on the speakers was selected.

Anther issues I had was that while the database set up the device with most of the functions of my Sky + remote, it omitted some crucial ones and I had to go into the profile and manually add the controls. You can also reassign the buttons to some of your most frequently used functions so you don’t have to continually scroll though all the options on the LCD screen to get to the one you want.


The web based interface didn’t make this easy though. Despite having acres of screen real estate, the list of controls were placed in a small window, causing me to have to scroll up and down unnecessarily.

While it’s possible to tweak your settings to get round things like this it’s unfortunately something of a chore. The web based software is slow and it’s likely you’ll need to set aside plenty of time to get your system set up just right. The software is Java based and I also had to contend with one crash to add to the frustration.


The problem is that you really have to do make an effort, otherwise the benefit of the remote are limited. As it stood I found I had to put the other remotes away to make myself use the 525. After all I think the Sky remote control is something of a design classic, with all the buttons and curves in the right place, making it comfortable to hold and all the buttons placed just where they should be. In contrast the 525 just didn’t feel as good to use, though ironically, once tweaked, mimicking the Sky+ it actually what it did best. It even has four colour coded buttons at the bottom.


Ultimately, you have to weigh up such ergonomic considerations against the fact that you can dispense with a box full of remotes, with the 525 able to control up to 15 devices. One thing that I very much liked about the 525 was the volume buttons. My own universal remote, a bulky Sony unit that looks like Jabba-the-Hutt, has dedicated volume buttons but to alter the volume I have to stab repeatedly on the squidgy keys. On the 525 you just hold the button down and the volume changes smoothly.


What disappointed me most however, was that my Scart switch-box didn’t appear in the database at all. Occasionally, it selects the wrong input and the picture switches to composite, which looks dreadful on a 36in TV. To be able to make sure that the correct input was always selected would have been useful.


From my time with the device it’s true to say that if you persevere you can get it to achieve most things you need it to do but the errors and omissions in the database were disappointing. 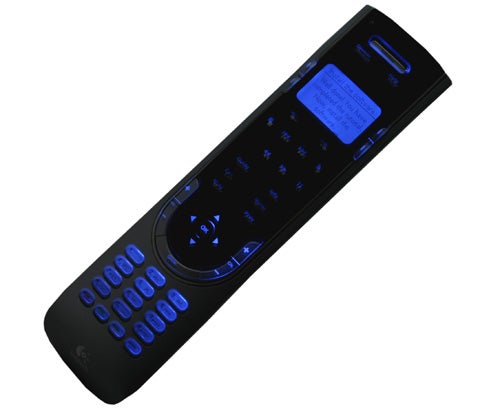 If you’re worried about whether your devices are in the database you can find out before you buy on the Logitech web site. If you then login after you’ve bought the device this information will be carried over, so you can speed up the process of getting your device working with your kit. Logitech also offers a freephone support line in the UK, which is great.


The 525 is a reasonable piece of kit but the software lets it down somewhat. It doesn’t look bad and build quality is reasonable but its quirks mean that it takes time, patience and effort to make the most of it.