The remote control you can’t find is always the one you need. Gadget fans’ living rooms are often so laden with cables, power supplies and remote controls that losing one or two is a veritable inevitability. Remotes like the Logitech Harmony 200 seek to bring a zen-like simplicity to your home. And this cheapest-yet model retails for under £20 too.

Logitech’s Harmony series has traditionally offered relatively high-end remotes for home cinema fanatics, offering a way to meld a half-dozen remote controls without losing – and even enhancing – functionality. The Harmony 200 is the cheapest and most accessible entry to the series yet. 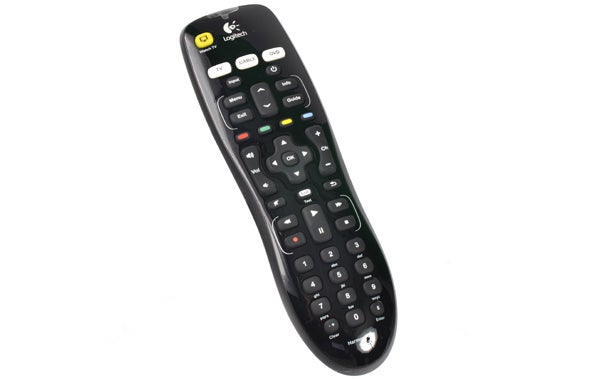 Build quality hasn’t suffered, though. The remote feels very tough, with creak-free plastics and a solid, weighty frame. Unlike more expensive remotes, it doesn’t rattle when you shake it either – something caused by the accelerometer of smarter models. Although we haven’t put the Harmony 200 through any harsh trials, it should survive being lobbed around by a four year-old in a tantrum a few times.

The handset’s ergonomics are great. There are two sweeping ridges on its back, designed to sit underneath your first two fingers. In our hands, it fits with a heart-warming familiarity. Your thumb then naturally rests onto the D-pad, the essential playback buttons also within easy reach.

We’re not so convinced by the dual-tone finish however. The curved back of the remote is matt textured black, while the front is very glossy. It gives the Harmony 200 a snazzier look than the all-matt 300 model, but the effect hasn’t been perfectly executed here. In the high-end Harmony One, Logitech makes sure that, from the front, it appears all-glossy. Two-tone is all good, but the glossy-matt divide doesn’t quite work in our eyes. As a device primarily of function rather than form, this is a minor niggle that will soon be forgotten in use.

The Logitech Harmony 200 features a very similar button layout to the series’s top-end models, intended to cover the main functions offered by the most popular living room devices. The numerical keypad and playback buttons are obvious inclusions, but things like the Info and Guide buttons demonstrate closer consideration of what we, as gadget-loving punters, need.

There remain some curious omissions, though. What about a discrete Library button to access the recordings on the PVRs so many of us own? As we’ll learn later, the potential for customisation dilutes this problem.

Above the “standard” buttons are the three white device selectors. These switch the functions of the buttons below – and yes, this means that the Logitech Harmony 200 can only emulate three remotes at once. However, this will be enough for the living rooms of many – and at £19.99 it’s cheap enough to buy several for different rooms of the house.

Right at the top is the one, lone, yellow macro button, dubbed “Watch TV”. It may have couch potato overtones but comes in very handy, once setup. On the top edge of the remote is a miniUSB slot, used to connect the Harmony 200 to a PC to setup, while the IR transmitter is on the back. 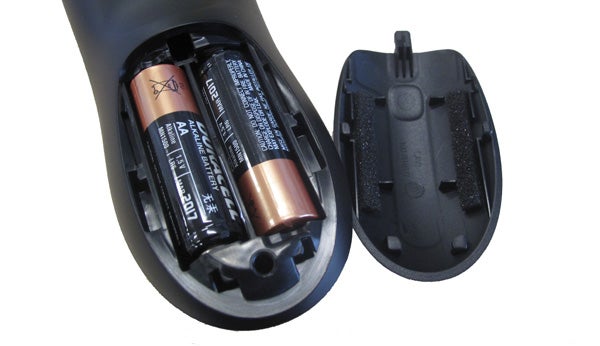 The batteries – two AAs are supplied – fit into the “standard” remote battery cubby hole on the back. There’s no facility for battery charging within the remote itself, but if you already own a charger and some low self-discharge rechargeable NiMH batteries, you’re laughing.

The worst part of using any universal remote is the setup procedure. Not only does it constitute you teaching one device to act like another, you do it multiple times and expect the poor thing not to crumble into a heap of transistors.

We’re happy to report that the Logitech Harmony 200 offers the most painless setup of any Harmony product we’ve used yet, primarily because it’s simpler than its brothers. To get started, you simply plug the remote into a computer.

Use Logitech’s device detector browser plug-in and you don’t even have to say which device you’re using. The software is browser-based, never our platform of choice, and doesn’t support Macs, but plugs into the same device database that powers Logitech’s £300 Harmony 1100. It features more than 225,000 devices, and is the most complete of any database of this type we’ve used.

It appears to be updated regularly too, as the holes we spotted while reviewing the Logitech Harmony 650 have since been plugged. Good work, Logitech.

To get the basics working in your Harmony 200, you simply have to select the three devices you want it to work with, one by one. These will be, rather unhelpfully, labelled either TV, Cable or DVD on the remote – how many of you consider yourselves to have a Cable box rather than a Sky box or PVR? Like the glossy/matt divide on the body, though, it’s something you’ll quickly get used to.

As long as the original devices’ functions are properly logged within the Harmony database, all the main functions will automatically be mapped to the 200’s buttons. We found there were invariably some strays, but these can be re-mapped manually to any key you like. It’s simply a case of dragging the original remote’s function, on the right hand-side of the screen, onto a visual representation of the 200’s buttons, on the left. 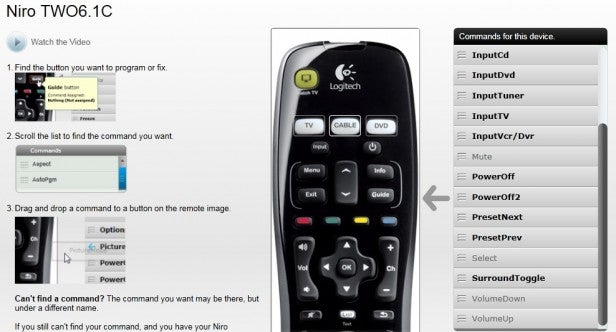 These strays will be the functions that can’t be intuitively mapped onto the standard controls – the Harmony 200 doesn’t just jam features onto buttons that don’t signpost that feature. We found that the colour buttons – used to navigate through interactive services and EPGs on Sky and Freeview boxes – were very useful as “generic” extra buttons (when not featured in the original remote, of course).

Logitech’s more expensive Harmony controllers are macro-heavy, offering plenty of buttons that will execute several commands from a single press. There’s just the one here – Watch TV. This will turn on the required devices and set your TV/home cinema amp to the right channel, ready to roll.

Like the 3-device limit, the basic macro-support pegs the Logitech Harmony 200 as a buy for those with a basic living room setup – a TV, Blu-ray player and Sky box, for example – but the simplicity this brings shouldn’t be underestimated. It’s a lot friendlier than the rather occasionally-imposing Harmony 650.

If you’ve already used a Logitech Harmony remote control, you might find the simplified approach of the 200 restrictive. However, it’s just the ticket if some of the people using it have a slightly technophobic bent.

Pressing on of the white device selector buttons re-configures switches the black buttons below to work with your three devices of choice. How well-mapped these are is in part up to you – Logitech doesn’t put a foot wrong here. It is a shame that there’s no way to tell which device is currently selected. With no display and no backlight to the buttons, the only way to be sure is to press the white button again – which we can envisage some less tech-savvy folk doing. 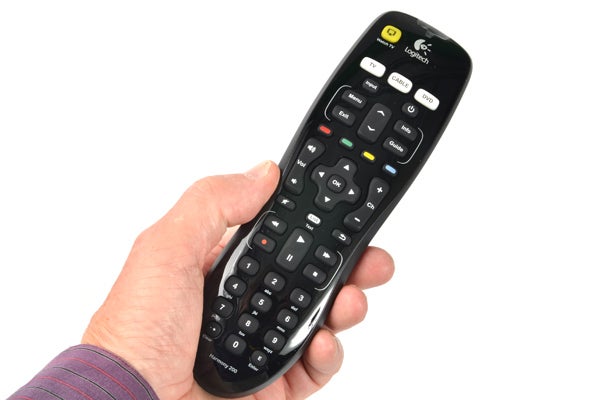 Of course, most people settle into the habit of only really controlling their TV-watching experience through one device – most probably a Sky box or PVR if you have one. So, you’ll be able to keep the same device selected for the most part.

This approach is rather different from Logitech’s more advanced devices, which let you splice and dice the functions of the control buttons between your devices depending on what activity you’re undertaking. In short, while others are driven by macros, the Harmony 200 is driven by devices. It’s a less adventurous style, but ultimately more intuitive for many people. 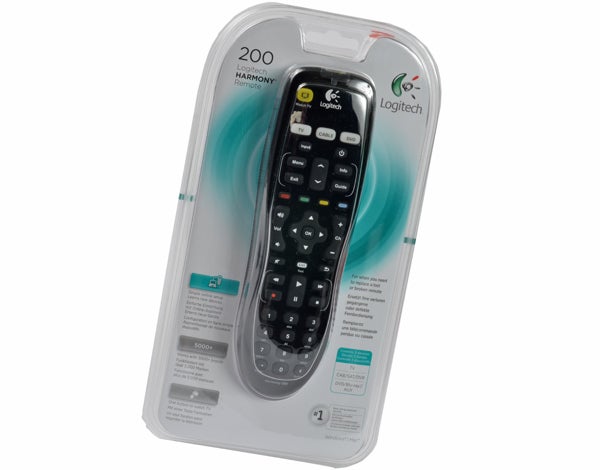 Its 3-device limit is severely limiting, though. The slightly more expensive Harmony 300 opens-up support for four devices and offers a few more buttons, without charging many more pounds for the privilege. Now that the Harmony range has filled-out, there really is a device for just about everyone within its walls.

If your setup is particularly rudimentary, and is used by those without a degree in geek, the Logitech Harmony 200 is an excellent choice. It feels sturdier than most of its rivals, doesn’t cost the earth and benefits from the fantastic Harmony database. We imagine many of you would benefit from the extra device added by the Harmony 300 and 300i (the glossy alternative), but then the 200 is arguably even simpler to use.

The Logitech Harmony 200 is a deliberately limited device. It can only replace three remotes, but, if that’s all you need, it’s a real star. It’s highly affordable, much easier to setup than most universal remotes and feels just as well-made as its more expensive counterparts. If your living room co-habitees can’t hack an advanced universal remote, this is a great solution.