The G933 is a wireless headset for gamers who want an immersive audio experience in an easy-to-use wireless package. Logitech has certainly met the brief, with an attractive design, great wireless performance and impressive gaming sound.

But while it’s got most of the bases covered, it’s not perfect, and has a few design oversights that stop it from topping its class.

Available in both black and white variants, the G933 is an attractive piece of hardware. It’s quite a big headset, with large ear cups and thick support pillars inspiring confidence in its durability.

The upper section of the headset houses the large plastic headband. It’s neatly engraved with a series of lines, and can be expanded to fit any sized head. The underside is coated in a layer of cloth-covered foam, with the unit producing a relatively tight fit against the head, but remaining comfortable over long gaming sessions. Rivals such as Corsair’s Void Pro will be arguably less fatiguing after prolonged use, but I prefer the larger gripping force found on Logitech’s cans. 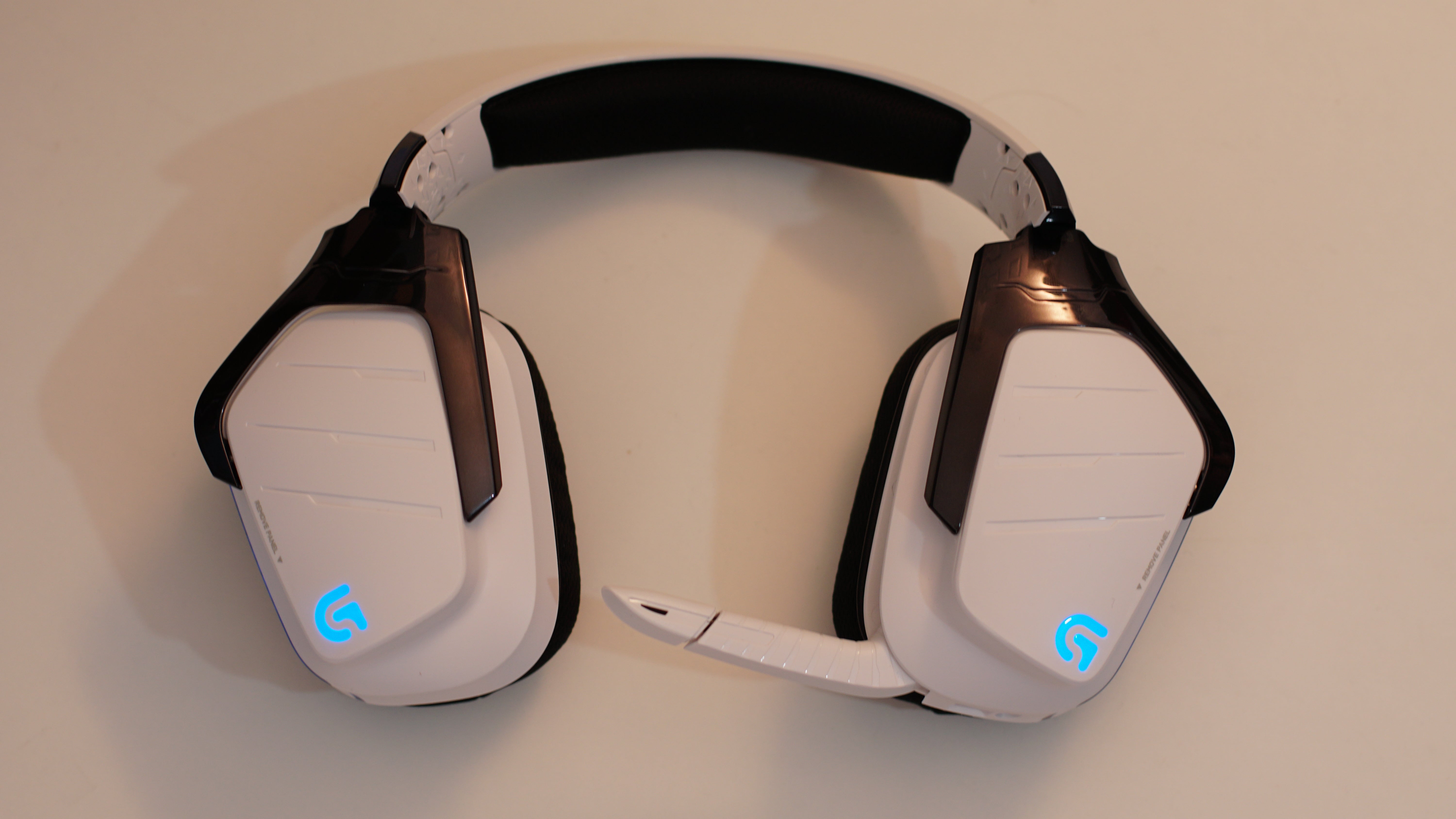 The earcups on the left and right sides of the headset can be rotated ninety degrees, and feature magnetic side panels that can be removed to reveal the USB dongle and replaceable battery. The matte plastic finish isn’t the most luxurious, but it seems strong and well constructed.

Each ear cup sports a removable earpad that uses a mixture of textured cloth and foam as padding material. I personally prefer this approach, as fabric is significantly less susceptible to sweat and heat build up when compared against faux leather. My main qualm with Logitech here is that they have not included an additional set of earpads in the box – RGB is great and all, but not at the cost of something genuinely useful to all.

Veins of RGB lighting span the sides of the headset, with an array of customisable buttons and dials lining the left hand side. The controls aren’t the easiest to use, as while the button shape varies for each function, I still found myself fumbling around to find the function I was after. The volume wheel is very simple to operate, however it’s also highly susceptible to accidental knocks – especially when slouching back into a chair or sofa. 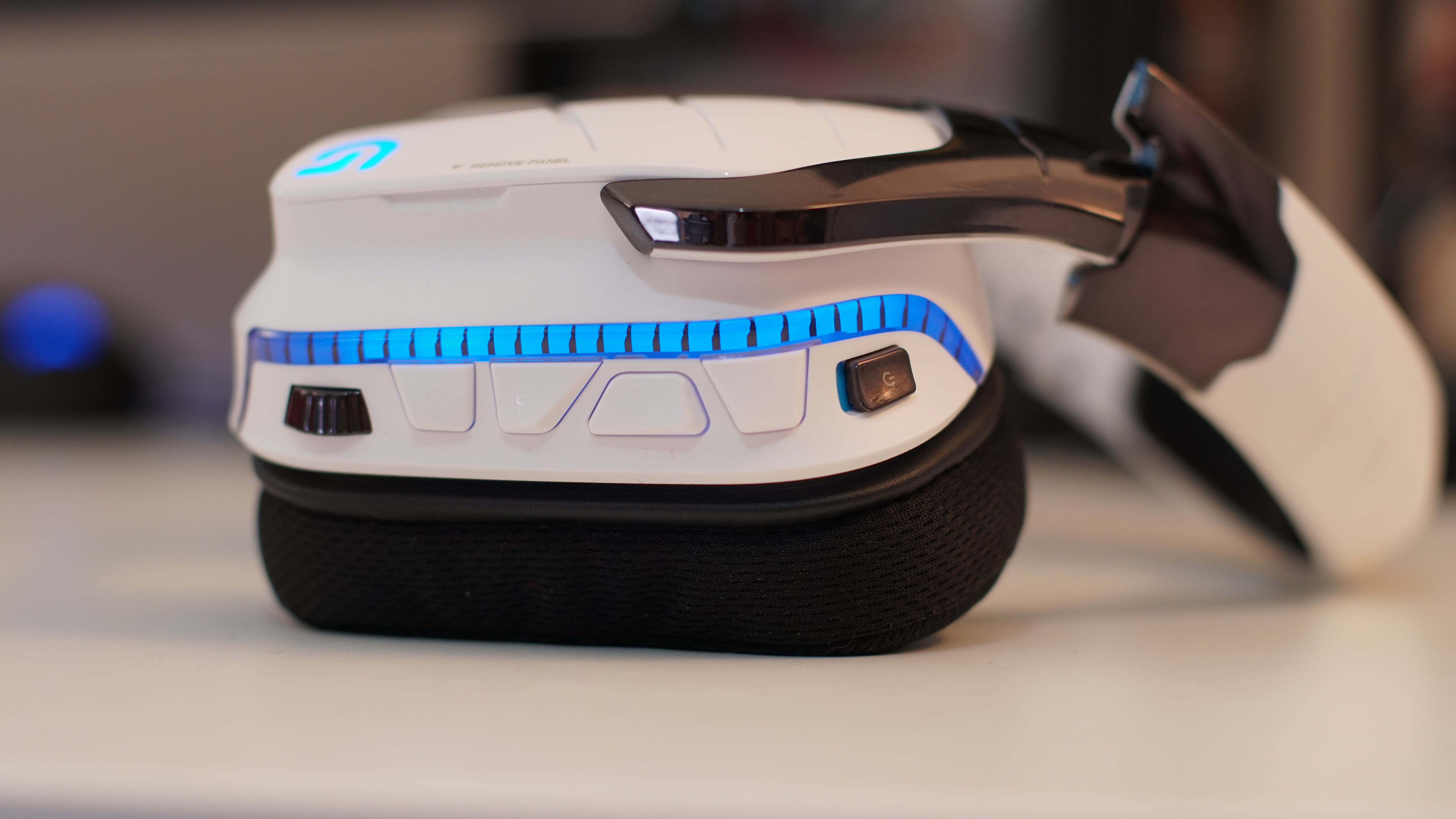 Charging the headset is achieved via the Micro USB port, with wired operation enabled by connecting into the 3.5mm jack. This allows for any analogue 3.5mm device to be used with the Artemis Spectrum in wired mode, a nice touch.

The microphone deploys from the left of the G933, with a small arm that folds down, before expanding into a malleable stem. It’s rather small, but pleasantly unobtrusive.

Wireless headsets can be a mixed bag as far as raw audio performance is concerned, however Logitech has done an excellent job in this regard. It’s certainly tailored for gaming, though I feel that most will see this as a strength. Horizon Zero Dawn was a treat, with clear vocals alongside an expansive soundtrack that came across with detail without traces of static or distortion. The bass response is excellent too, with plenty of punch to the roars of corrupted machines, and explosions carrying a real sense of weight.

The G933 is a surround sound-capable headset, with both DTS and Dolby virtual surround sound technology enabling a more expansive audio experience. The tech has matured well, and is certainly worth experimenting with (just don’t expect it to instantly increase your Call Of Duty K/D ratio). There is a large caveat here however, and this is that it only works for PC gamers, with PS4 gamers being left with the default stereo sound. It’s certainly not a deal breaker, but Playstation fans wanting surround sound should instead consider something like the Astro A50. 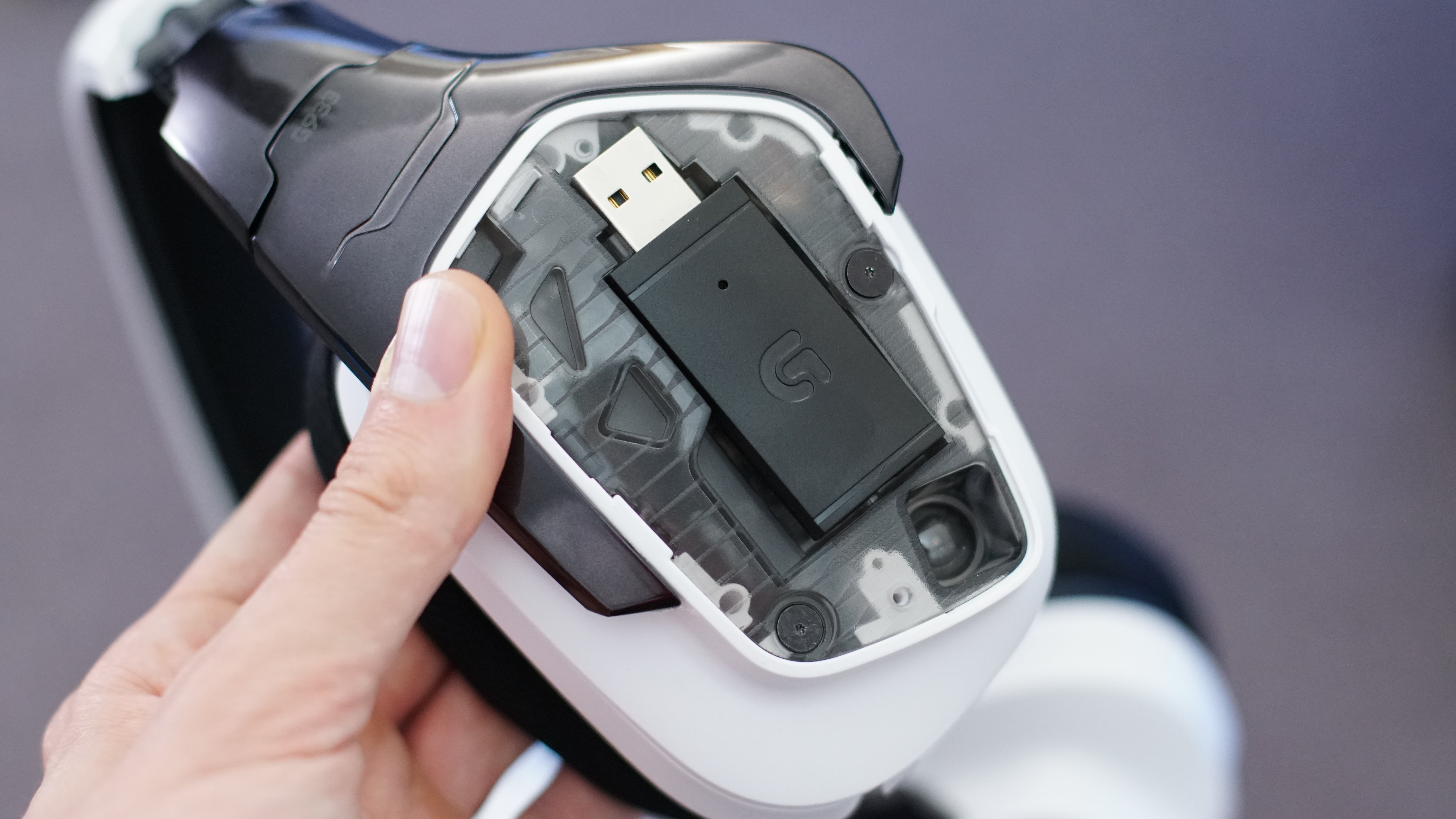 Music isn’t the headset’s strongest point, as complex tunes can start to unravel a little, with tracks losing instrument detail and rhythm. While still far from perfect, the Steelseries Arctis 7 produces an overall better sound for music playback. I’m being quite picky though, as the G933 does perform relatively well, with tracks having plenty low-end kick, yet still having controlled highs. If you’re after something to exclusively listen to music with, a pair of wireless headphones will be a better bet, but for a gaming headset it’s not a bad performance at all.

The microphone is excellent on the G933. Don’t let its smaller design fool you, the microphone records voice clearly, and isn’t particularly vulnerable to pop from ‘p’ sounds. The end result is a solution that works very well for Discord and game chat, though professionals will still need a dedicated microphone for the highest quality recordings. 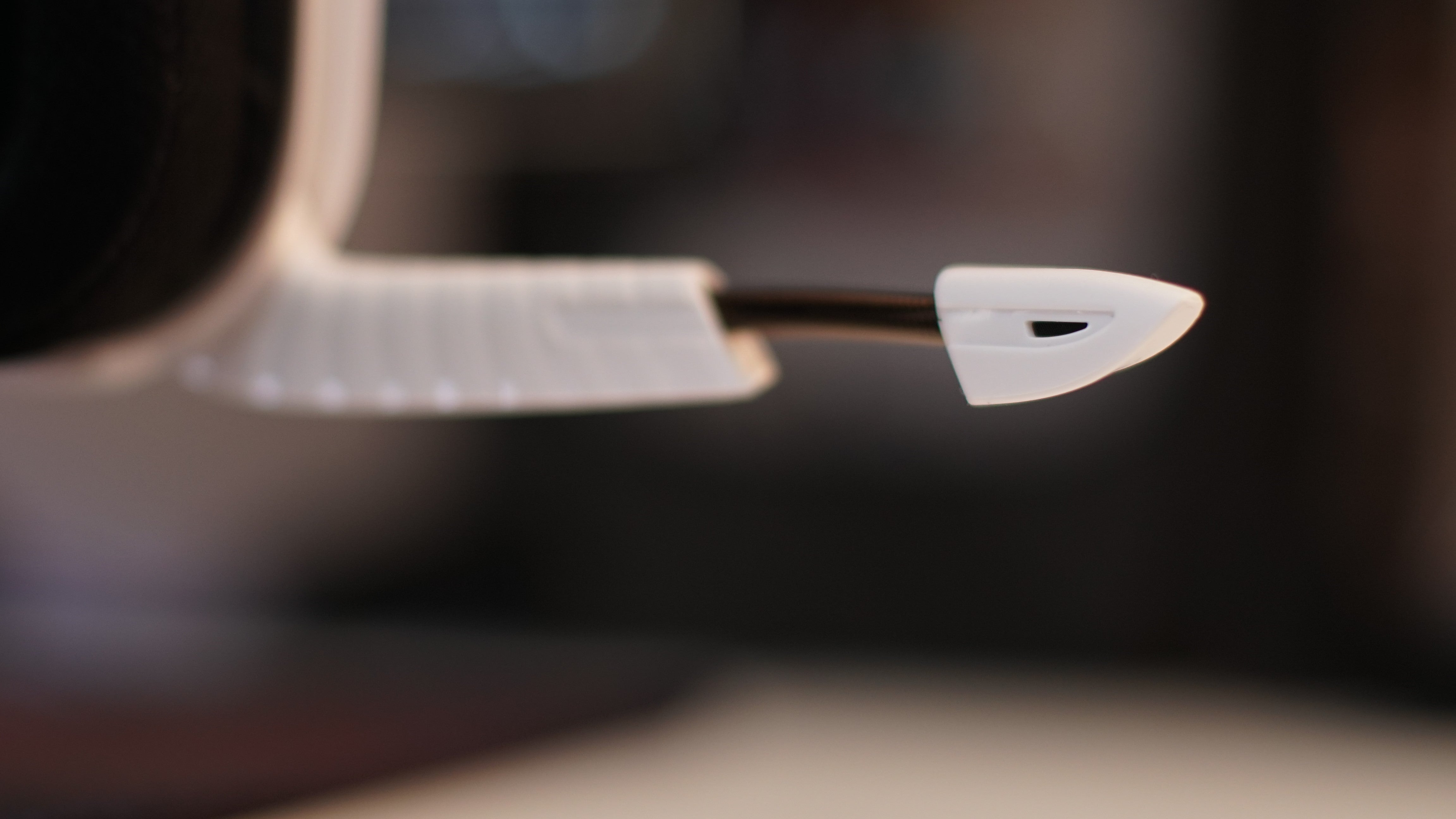 The Artemis Spectrum has a maximum range of 20m, and while that’s unlikely to be achieved indoors, the real-world range is excellent, with a clear signal that allows for navigation into adjacent rooms without large drop outs. The battery lasts for about 8-10 hours, and this will reduce if using the RGB lighting. It’s going to be adequate for most, but rivals from Corsair, Razer and Astro outperform the G933 in the battery department.

The G933 can be customised with Logitech’s gaming software, which is available as a free download from the Logitech website. It’s here that you can play with the surround sound settings, tweak the equaliser and configure the RGB lighting. As the RGB lighting is not visible to the headset wearer, I’d advise disabling it for extra battery life.

Should I buy the Logitech G933?

The Logitech G933 is an excellent gaming headset. The combination of a comfortable design, great audio quality and a surprisingly good microphone make a pleasing audio package, and this a worthy competitor to the likes of Razer’s Man O’War.

It’s a shame that small design oversights slightly dampen the otherwise impressive headset. The battery life is among the lowest in its class, and fiddly controls make the Artemis Spectrum a touch difficult to operate. If these things don’t bother you however, you can buy the G933 with confidence that your games are about to sound a whole lot better.

A superb gaming headset that ticks most of the boxes.