The Logitech G915 TKL is one of the best compact wireless gaming keyboards available, featuring oodles of versatility by supporting both Bluetooth and Logitech's Lightspeed technology, but it also comes with a very high price.

How do you improve on one of the best gaming keyboards currently available? Make it smaller of course, and that’s exactly what Logitech has done with the Logitech G915 TKL.

By ditching the number pad, Logitech has been able to reduce the length of its highly rated G915 Lightspeed mechanical keyboard by over 100mm, which not only helps save desk space, but also makes it easier to shove the keyboard in a bag when commuting to the office or a friend’s house.

A slight price drop from the original Logitech G915 only increases its appeal, but at £199 it’s still very expensive compared to rival gaming keyboards. Can its wicked-fast Lightspeed technology and low-profile mechanical keys justify the cost?

Logitech G915 TKL design – Even smaller and lighter than before

The original Logitech G915 was already an absurdly thin gaming keyboard, with its skinny chassis and low-profile keys making it a doddle to port around.

The new TKL version improves even further in this regard, snubbing the number pad in favour of a more compact design. The Logitech G915 measures in at 368mm at long, which is 107mm shorter than its predecessor. That may not sound significant on paper, but it’s been a joy to free up more space on my desk, especially since I never actually use the number pad. 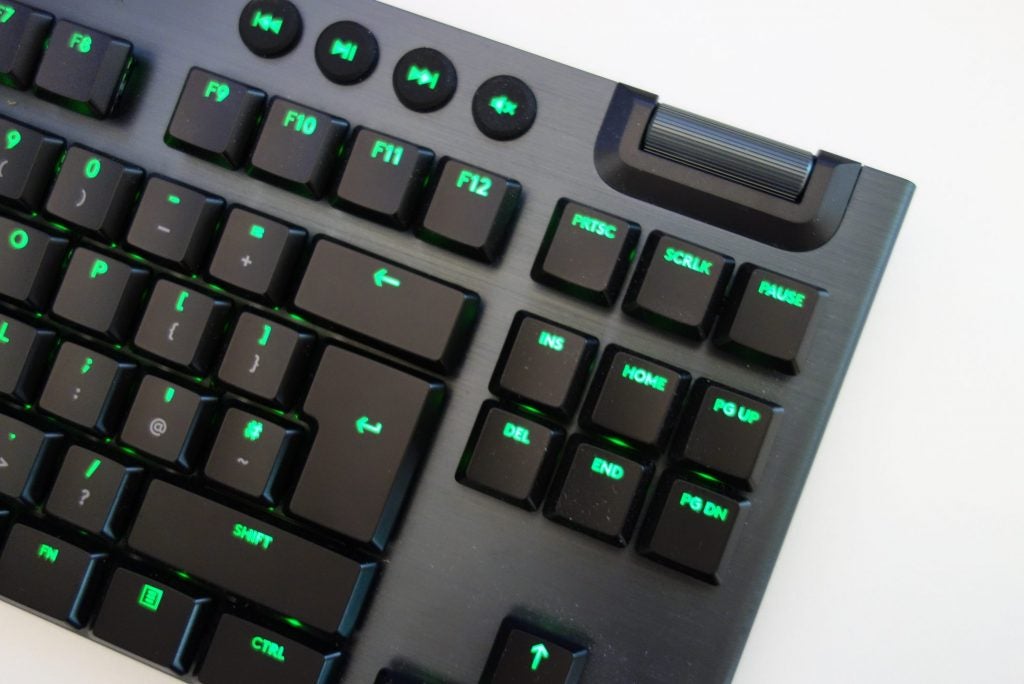 Logitech has done a marvellous job balancing the design and performance, avoiding other manufacturers’ sins of squeezing down the ‘Enter’ or arrow keys. Every key remains chunky enough for stress-free typing, while Logitech also retains the playback buttons which makes Spotify navigation significantly easier.

Not every button made the cut though, as the dedicated macro buttons are absent. There’s no need to fret though, as Logitech’s superb G Hub software allows you to assign custom shortcuts to the F keys instead, which is a fantastic compromise in my eyes. 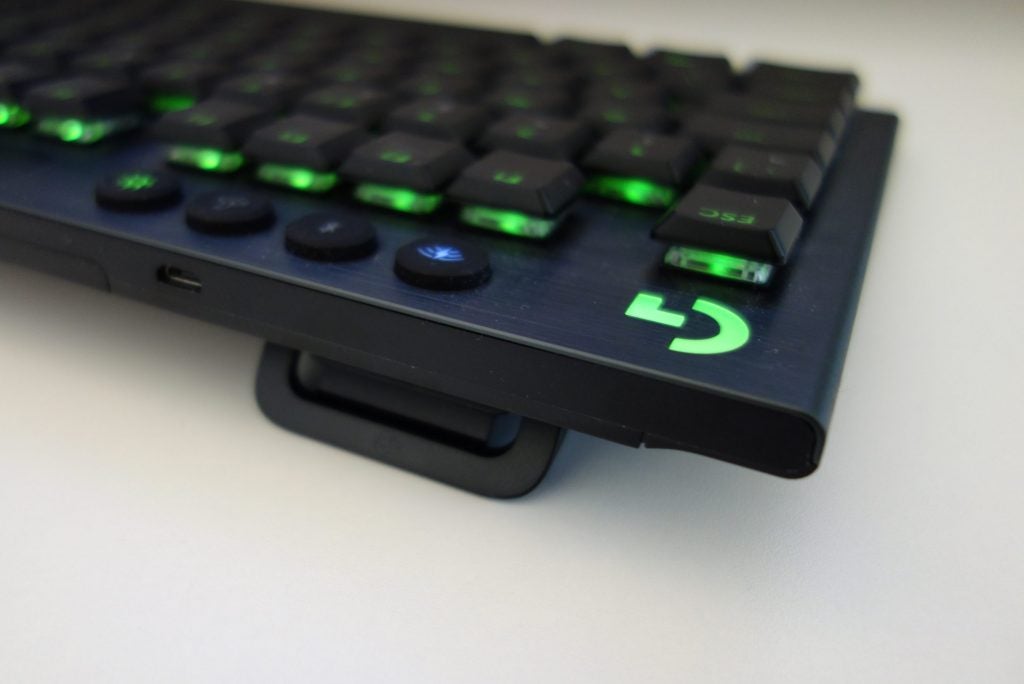 Rather bizarrely, the volume wheel no longer offers any traction. It still works perfectly, with enough sensitivity for me to adjust the volume by two degrees at a time, but I do miss the feel of the older version. You also get Caps Lock and battery light indicators at the top, which is a small feature albeit a very welcome one.

Otherwise, the TKL features the same excellent metal chassis. It looks very elegant and feels satisfyingly smooth, although it is admittedly a dust magnet. The bottom of the keyboard is covered in plastic, featuring two flip out stands which angle the keyboard up at a more comfortable position. There’s also a little compartment here to secure the wireless adapter when you’re on the move. Handy.

Logitech sent me the GL Clicky version which, as you probably guessed, emit a loud clicking noise when you hit each key. It feels great when gaming, with a crunchy feel proving super satisfying in action games particularly. It is a pretty loud keyboard and so may prove annoying to those nearby, but if you’re planning on using it in the office you can just opt for the Linear or Tactile switches instead. I love that Logitech gives you a choice. 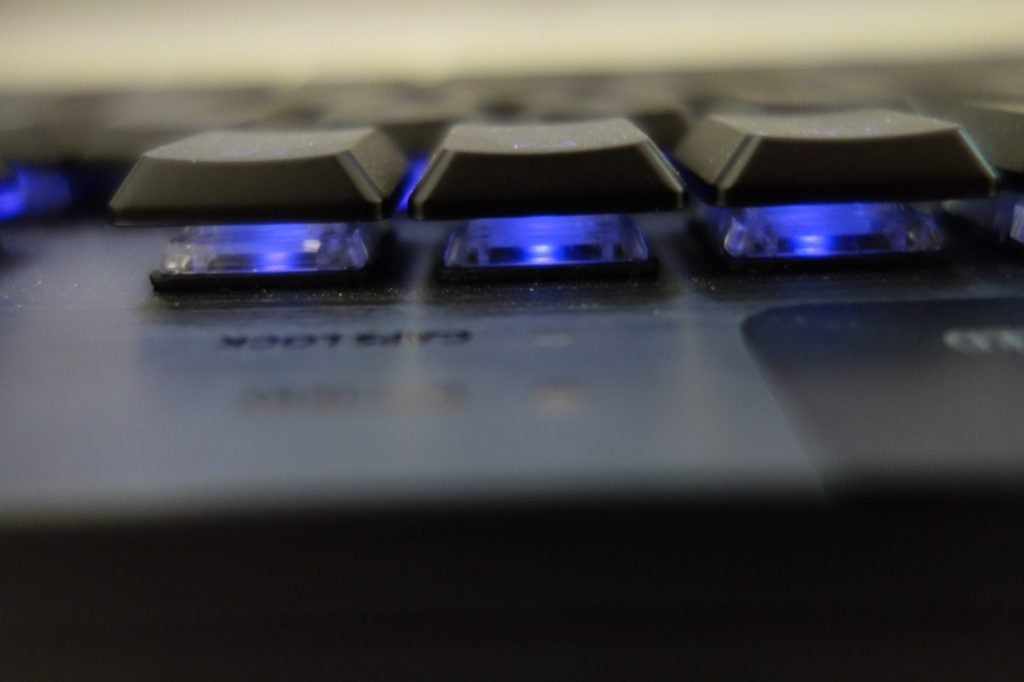 The keycaps are half the size of your typical gaming keyboard, which not only ensures 25% faster actuation but also means small-handed folk have an easier time stretching their fingers to press a key. I’ve always had issues holding ‘Shift’ to sprint in shooters, and the G915 TKL made it so much easier.

The G915 TKL uses two different wireless technologies. The speediest is Logitech’s own Lightspeed technology, requiring you to plug the bundled USB dongle into your computer. Lightspeed supposedly provides a nippy 1ms performance, making it the best option for competitive gaming.

The second wireless option is Bluetooth, which is built into most devices and so allows you to connect to smartphones, tablets and more. Bluetooth is also more battery efficient, allowing you to squeeze more hours between charging. What’s more, the keyboard features dedicated Lightspeed and Bluetooth buttons, so you can swap between devices easily which is very useful for multitasking. 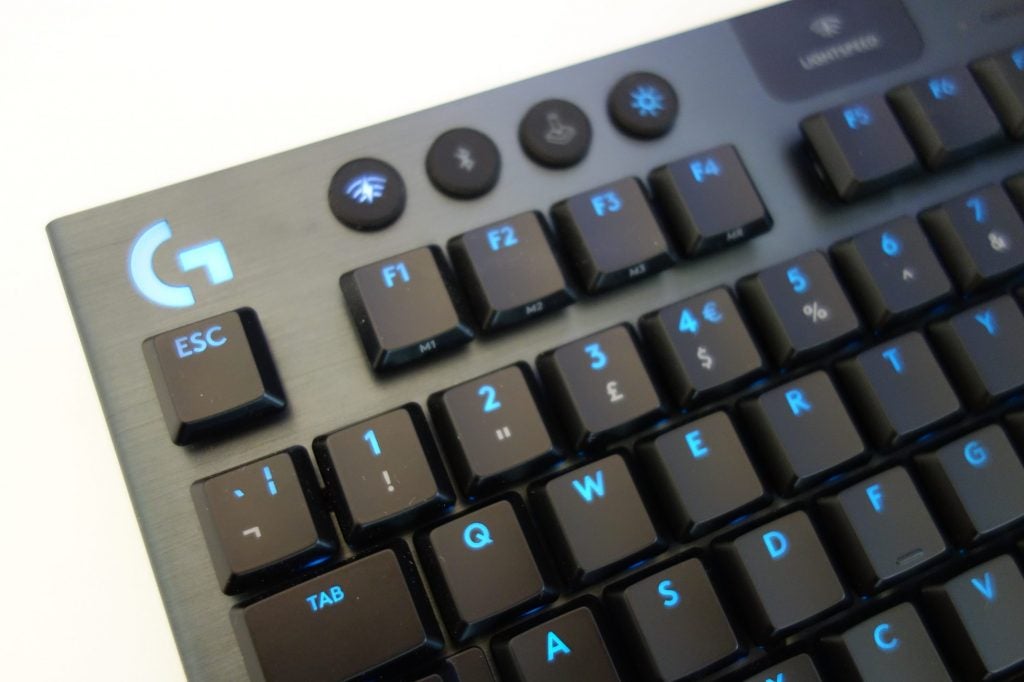 The battery life is superb, with Logitech claiming a 40-hour stamina when the RGB lights are at the brightest setting. That sounds about right to me, as I was able to use the keyboard via a Lightspeed connection for just over a week before it flashed red to indicate low power. Logitech claims the keyboard can last for up to 135 days (assuming eight hours of use each day) with the RGB lighting turned off, although I wouldn’t recommend it since it becomes difficult to see each key’s lettering.

A microUSB charging cable comes bundled in the box, which is an adequate length to reach the back of your PC. It’s slightly disappointing the G915 doesn’t charge via USB-C, since most modern devices use that connection now, but Logitech claims it would be a needless extra expense since the wireless keyboard wouldn’t benefit from the improved data transfer speeds. A fair argument, but I’m looking forward to a world where all devices use one universal power cable.

The Logitech G915 TKL features vividly bright RGB lighting, which shines through the transparent key letterings. The brightness can be altered via a dedicated button at top, although I personally liked to keep it cranked up the maximum.

Logitech claims there are 16.8 million colours available through the G Hub. There are a lot of customisations available here, with preset effects and animations seeing the RGB lighting pulse, flash or wash across the board. Logitech even allows you to set up custom effects, offering up an abundance of control. 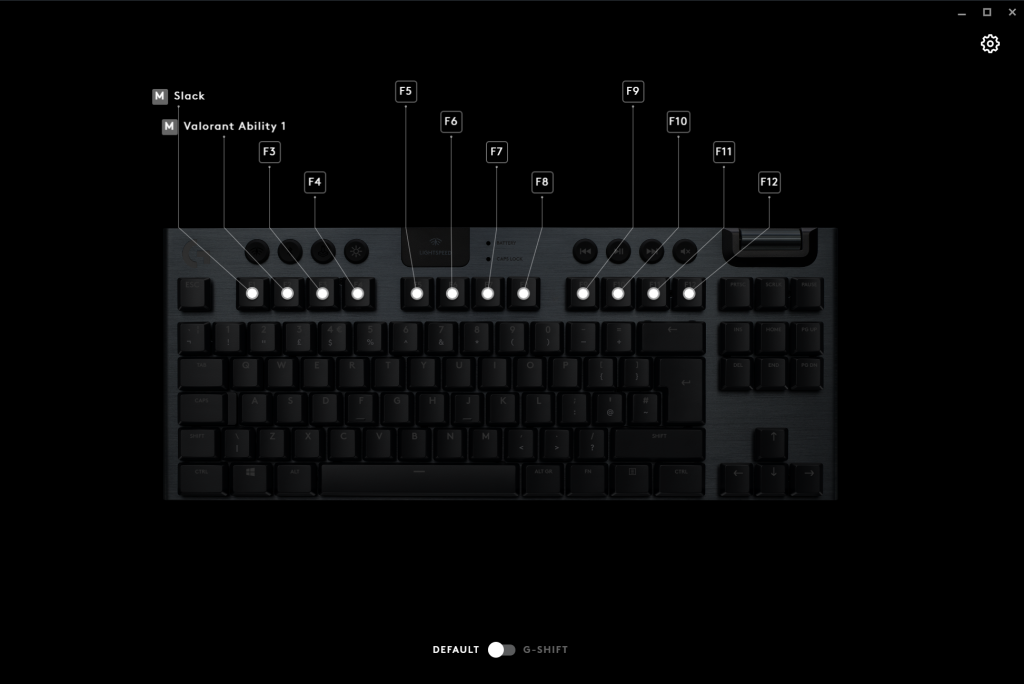 The G Hub also lets you set up your own Macro keys, and it’s not just restricted to key shortcuts and combinations, but can also have the likes of F1 set to paste, launch applications such as Slack or even activate video streaming. The number of options is genuinely staggering, for both gaming and productivity.

A Game Mode feature also allows you to disable certain keys when gaming. This is useful for those who get infuriated by accidental Windows key presses pulling you out of a game.

The Logitech G Hub is comfortably the most sophisticated peripheral software I’ve ever used, with Razer the only company that even comes close in this regard. Having the flexibility to set advanced Macro keys and fine tune the RGB lighting will be a game-changer for certain gamers, making the jump to Logitech all the more tempting.

Should you buy the Logitech G915 TKL?

The Logitech G915 TKL is an absolutely fantastic gaming keyboard, with the smaller form factor making this compact peripheral even more portable. Importantly, Logitech has not sacrificed the performance quality when downsizing, with the snappy switches an absolute joy to use.

It’s a shame that Logitech ditched the Macro keys in order to scale down, but since the excellent G Hub software allows you to turn the F keys into custom-made shortcuts, it’s not a major issue. Such a decision also means Logitech has been able to retain the playback buttons and volume wheel, allowing it to excel as an all-round keyboard rather than one just for gaming.

The TKL also features all the excellent features of the standard G915, including Lightspeed and Bluetooth connectivity, a trio of switch options and low-profile keys that are comfortable and speedy. The TKL version is also £10 cheaper than the original, despite arguably being the superior option.

However, that £199 price is still extremely expensive, costing more than the majority of its rivals. The lack of USB passthrough is also disappointing given the eye-watering price.

If you’re happy to spend the money though, you’ll be rewarded with one of the very best gaming keyboards currently available.