There's no doubt that the Logitech G915 offers a brilliant wireless experience with some great switches. They've built a sturdy product that ushers in a new era for Logitech. That said, I'd recommend the G915 in a heartbeat if it wasn't for one thing - its price. Even in today's market, £209.99 is a lot, but otherwise, it's a thumbs-up from me.

What is the Logitech G915 Lightspeed Keyboard?

Coming in at a cool £210, it’s by no means cheap, but that being said, compared to some high-end models like the much-loved Razer Huntsman Elite, it’s not that much more expensive either.

However, while the Huntsman Elite offers laser recognition in its switches, the G910 offers both wireless connectivity and low profile switches for just a little more, looking to be one of the best premium gaming keyboards.

Much like a large sector of the market these days, Logitech’s G915 comes complete with a skeletal and slim design, with height of just 22mm. That’s pretty damn slim.

It’s a mostly plastic construction, with a curved metal top plate consisting of an alloy of aluminium and magnesium lining the top of the board in a sleek fashion. The metal top plate is pretty much standard issue these days, but that doesn’t detract from the G915’s stylish feel, although the corners have slightly sharp edges you might want to be weary of when moving it around.

Wireless keyboards don’t usually feature lock lights at all and whilst the G915 features both Caps Lock and Battery indicators above the F10 and F11 keys, there’s no indication for both Num Lock and Scroll Lock. What’s more, the two lights present are a little small to see when compared to some sets of lock lights like that of the Mad Catz Strike 4. 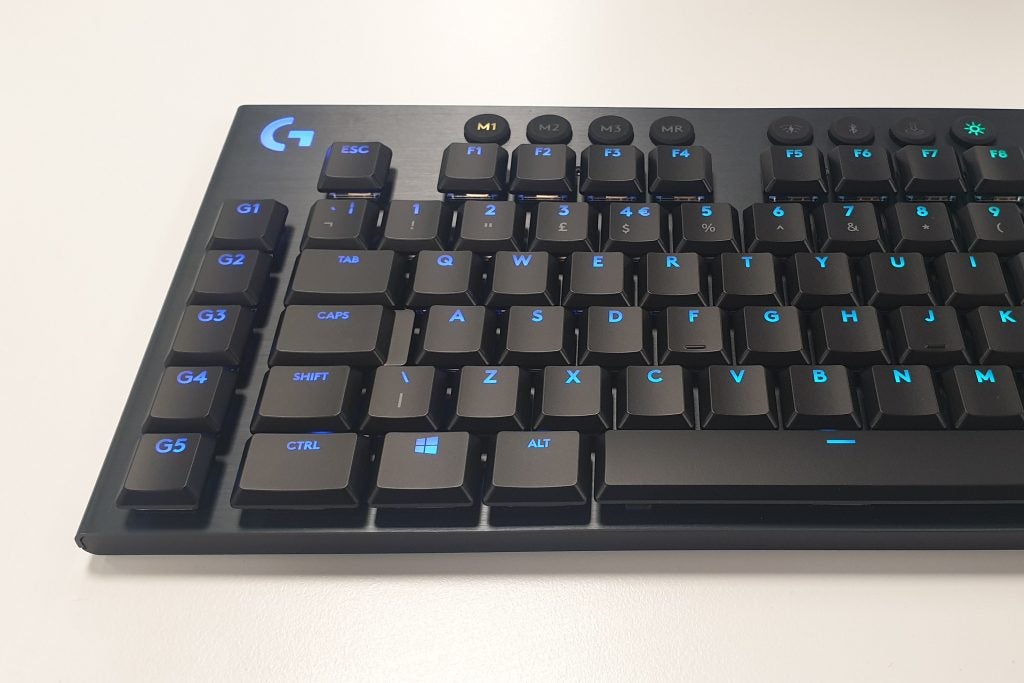 One interesting talking point here is the keycaps. Whilst being designed for low profile mechanical switches, they come as two-shot moulded: Logitech have the standard black plastic above a clear plastic, designed to let the backlighting shine through. This is unusual, but seeing double-shot moulded keycaps in any guise is nice.

I’m happy to report the G915 features a whole host of macro keys, programmable through Logitech’s G HUB software. There’s also a set of multimedia keys in the top right corner of the keyboard, along with what Logitech describe as a ‘fountain design’ volume roller. What it means by this is that it’s open-housed round the back allowing for maximum control over sound levels. 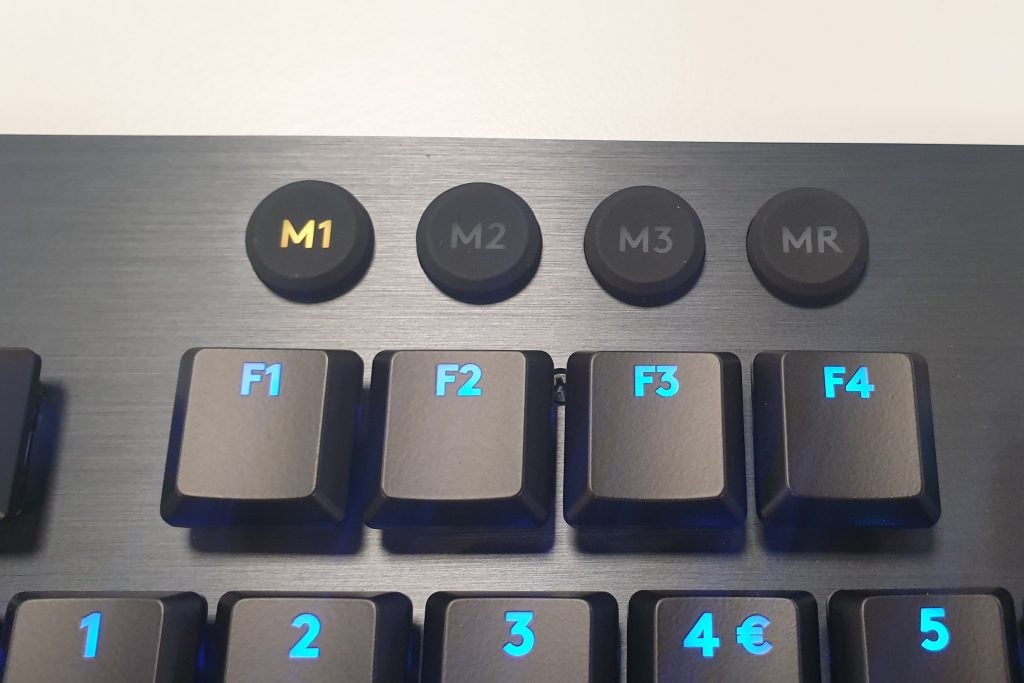 Just above the normal selection of F keys comes eight different keys – some marked with the letter ‘M’ (M1, M2, M3, MR) and then some with designated icons adjacent to them on the right. The M keys allow for on-the-fly changing of lighting profiles, although with the software not installed, the options are severely limited.

Designated icon keys include switchable connectivity for the G915 through either the Lightspeed receiver or a standard Bluetooth connection, allowing you to connect to two devices simultaneously and switch between them seamlessly. There’s also changeable brightness present for the backlighting and a button with a joystick icon designed to put the G915 into ‘Game Mode’, giving users the ability to lock certain keys when gaming, which is really handy.

The G915 comes with a choice of three low profile switches which Logitech call their ‘GL’ line. They’re part of a new venture between Logitech and Chinese manufacturer Kalih, who also make switches for both Razer and other manufacturers. The GL switches are somewhat similar to Cherry’s ML switches which can be found on multiple gaming keyboards.

The three GL switches available on the Logitech G915 Lightspeed Keyboard include GL Tactile, GL Linear and GL Clicky. The variant we were supplied with featured the white ‘Clicky’ switches, complete with an actuation force of 50cN, a total travel of 3mm and an actutation point of 1.5mm.

Logitech claims this gives its keys 25% less total travel than a standard switch supplied by Cherry, Gateron, or Kalih. As a result, Logitech suggest you can type 25% faster. 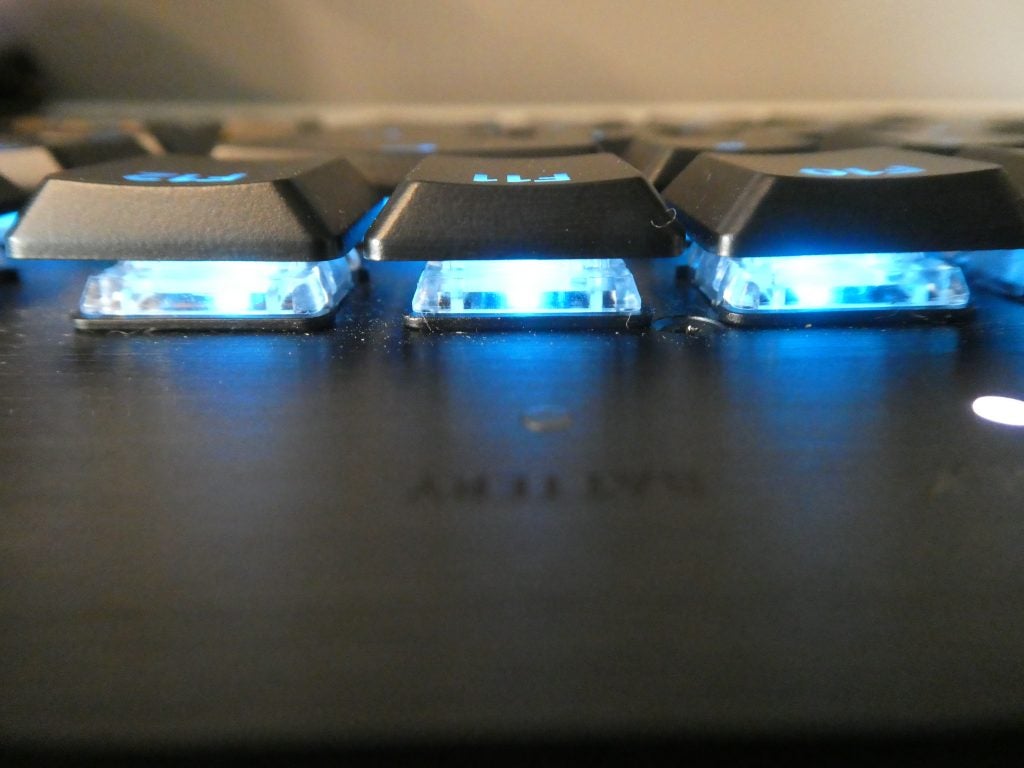 Nice-looking, but noisy: Your co-workers might not like you for using the Logitech G915 Lightspeed in the office.

A 50cN actuation force makes these GL switches light and clicky at the same time, making them rather pleasant in day-to-day usage, offering the best of both worlds in terms of a lighter keystroke and a sweet clicky sound.

They offer something a little different to Cherry MX Blues and are more comparable to the Green switches found on the latest Razer Blackwidow, sharing an identical actuation force.

Ironically, those switches are also made by Kalih, as both manufacturers decided to shy away from Cherry some years ago and replace them with other switch manufacturers. There’s a similar feel to the GL’s distant cousin in the Razer Greens, but it’s not the exact same.

One pretty glaring issue is how loud the GL switches are. As with any keyboard with audibly clicky switches, you may get a few complaints from other people about the noise. If you’re alone, typing or gaming in an office or your bedroom, it’s perfectly fine, but the G915 is perhaps not suitable for shared spaces.

In driving on a few Dirt Rally 2.0 runs, the low profile switches did offer something a little quicker and perhaps a tad more responsive, although I’m used to something with an extra 1mm of switch travel. That may not sound an awful lot, but I felt they gave an extra edge to my game when playing a few rounds of Counter-Strike.

One other thing to shout about is the incredible battery life the G915 offers. With full backlighting enabled, Logitech says it will last up to 12 days on a single charge, assuming eight hours of constant use per day. With the lights off, they say it can last a staggering 135 days. In my usage, I had the lighting fully up and the battery drain wasn’t all too noticeable. Kudos to Logitech there. 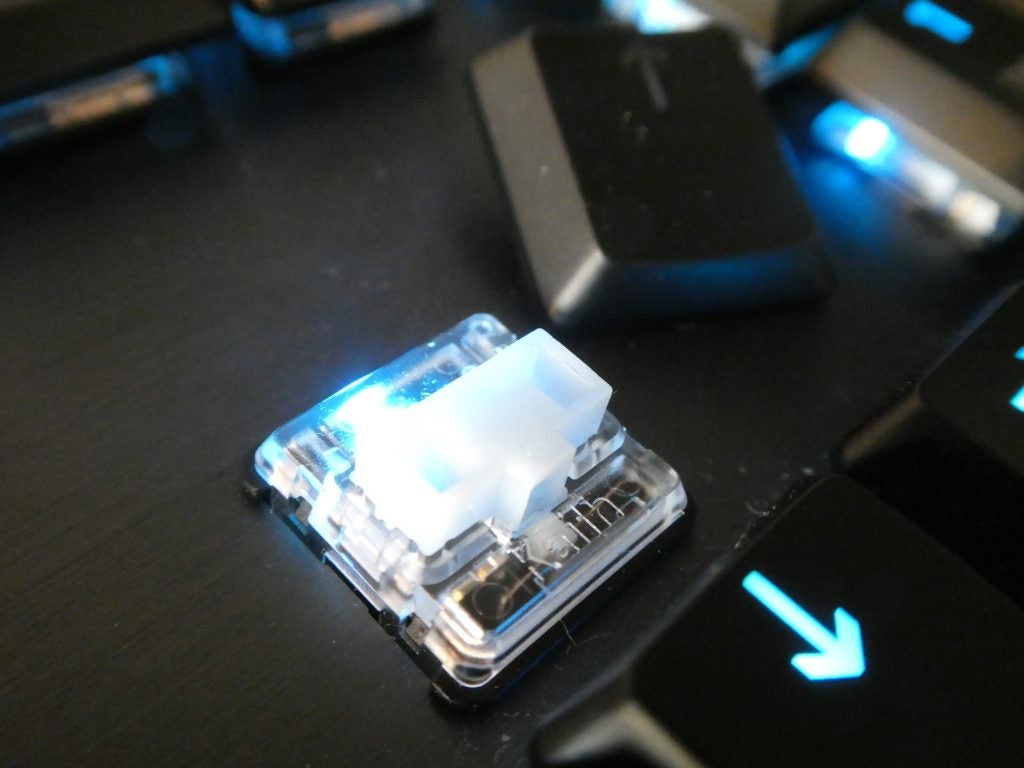 Out of the box, the G915’s backlighting presets won’t be suited to everyone’s tastes, featuring three presets thanks to the M keys. M1 triggers a standard ‘colour wave’, M2 gives you a block colour of a light blue that ‘breathes’ and M3 pulsates individual colours in a spectrum cycle. Whilst the out of the box settings aren’t necessarily the best, with Logitech’s G HUB software, the possibilities are pretty much endless.

As with its skeletal design, there is a teensy bit of light seepage, meaning the backlighting isn’t as sharp as it could be. However, this isn’t just a problem for Logitech, it plagues any firm that utilises an open housing.

The Logitech G HUB has to be one of the most intuitive and advanced examples of peripheral software I’ve used in a good while. While being feature packed with lighting presets designed to satisfy any RGB fanboys, there’s also options to lock as many keys as you like within the ‘Game Mode’ that can be enabled at the flick of a button.

There’s some pretty left-field presets that can be found in the G HUB, such as the Audio Visualiser setting which sees the light effects react to the beat of the music or soundtrack playing. This isn’t a completely unique feature, but it’s still a lovely little addition.

The real advantages come with a Logitech account in conjunction with the G HUB software. It opens you up to a whole host of other features such as the ability to download presets from other people on a storefront kind of thing. 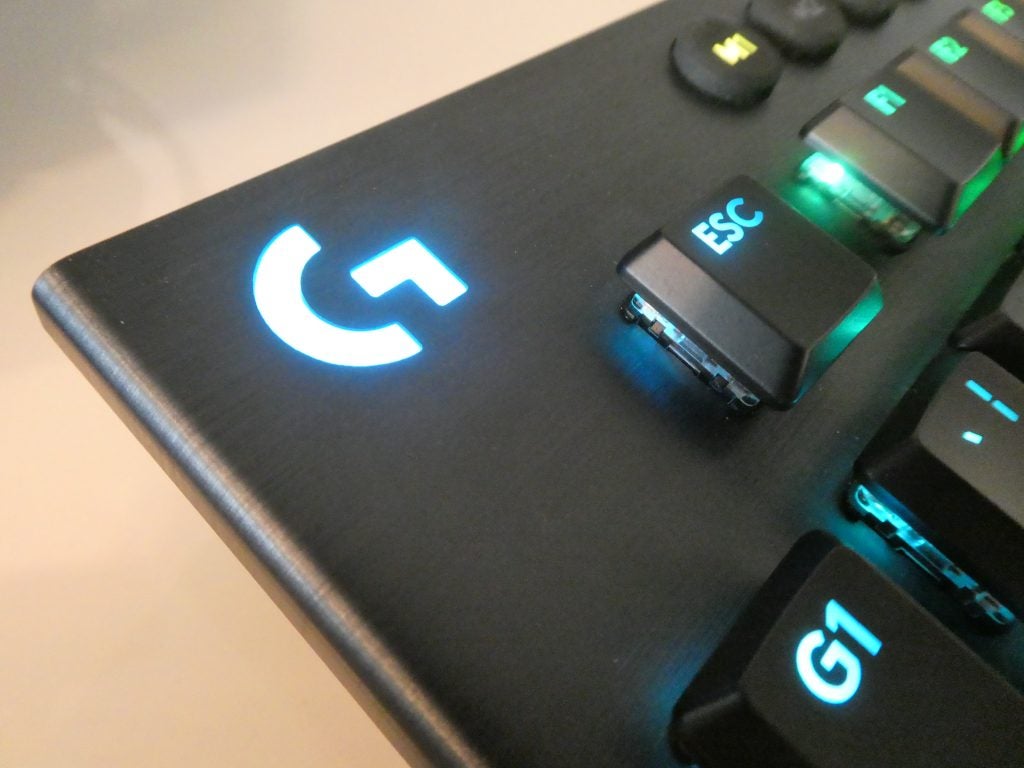 A side shot of the G915 showing its lovely backlighting, complete with illuminated Logitech G logo

Should I Buy The Logitech G915 Lightspeed Keyboard?

There’s no doubt the Logitech G915 offers a brilliant wireless experience with some great switches. This is a well-built and sturdy product that ushers in a new era for the Swiss peripherals company.

With all this said and done, I’d recommend the G915 in a heartbeat if it wasn’t for one thing – the price tag. Even in today’s market, £209.99 is a fair amount, but otherwise, it’s a thumbs-up from me.