The Logitech G903 is proof of the age-old adage: “you get what you pay for”. Despite it costing a quite frankly ridiculous £149.99, it is without doubt one of the best gaming mice money can buy – and a near-peerless performer in the wireless space.

For your hard-earned cash you get an ergonomic, customisable gaming mouse offering stellar performance and numerous cutting-edge features – including support for Logitech’s custom ‘Lightspeed’ and ‘Powerplay’ wireless charging.

The only downside is that, to fully take advantage of all its features, you’ll have to shell out a further £90 for the company’s custom charging mat. This makes it a seriously expensive luxury that’s complete overkill for most regular gamers. 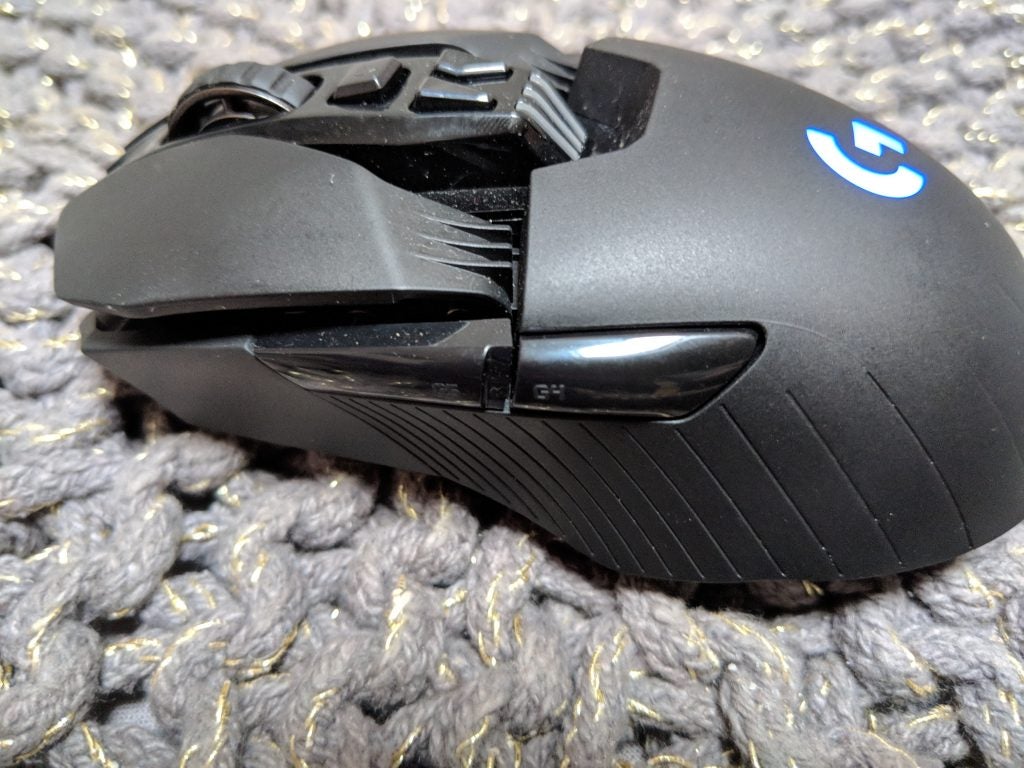 Visually, the G903 is a wee bit ostentatious for my taste. It features hard edges, RGB lighting galore and more programmable keys than you can shake a stick at. If Acer made a Predator mouse then this is what I imagine it would look like.

Visuals aside, it ticks nearly all the right boxes for gamers and sports a few nifty design features you won’t find on many other gaming mice.

Starting with the basics, the G903 comes with up to 11 keys, depending on how you set it up. Out of the box, there are two extras on its left side and an option to add two more to the right using a magnetically attached plastic plug.

The idea here is to let gamers set up the mouse for either their left or right hand – which, as a lefty myself, is very welcome indeed. You may even choose to go all-out, and have four side buttons – although, personally, I think that’s overkill, even if you’re an avid MOBA or ARPG player.

Up top you’ll find basic buttons to adjust the G903’s DPI, and switch between a smooth or step action on its wheel, plus the usual left and right controls.

Although small, the ability to adjust the mouse wheel’s action is oddly useful – after a few weeks with the mouse, I found myself using the resistance-free option when scrolling the internet and doing creative work, switching back to the more precise step action while gaming. 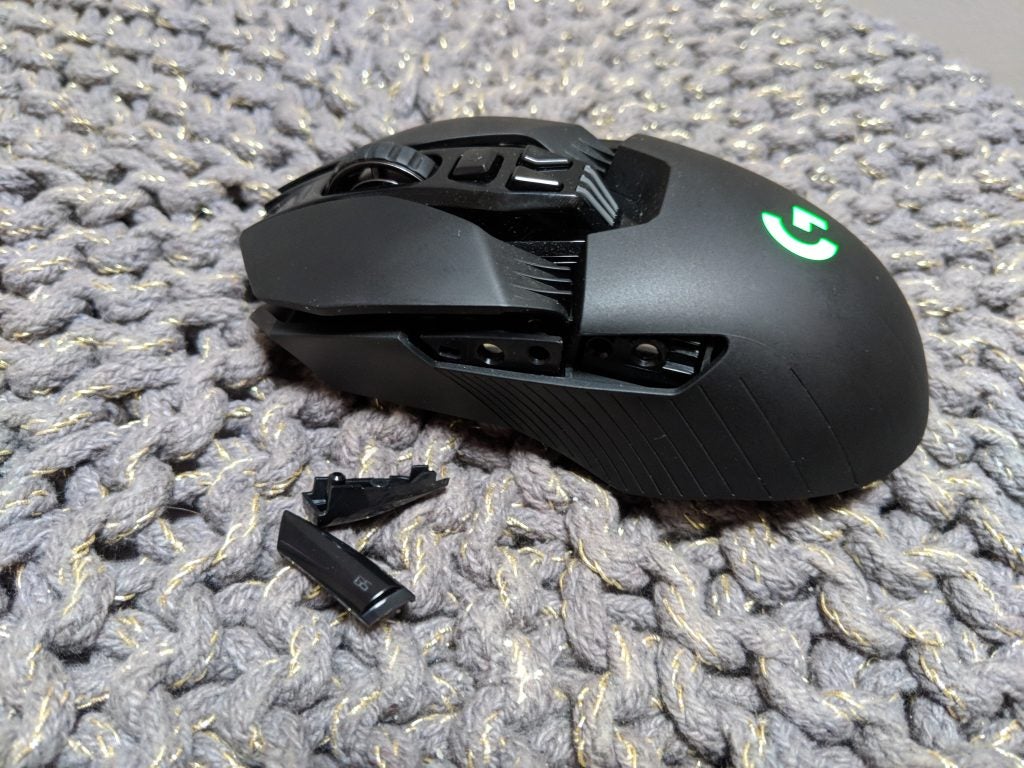 In hand the mouse feels suitably ergonomic, especially when compared to rivals, like the Corsair Dark Core RGB SE, which has a less-intuitive button placement and chunkier chassis. Unlike the Corsair, the G903’s side controls are located where your thumb would naturally sit, and the slightly arched, rounded back pushes your palm up so all the top controls are within easy reach at all times.

Despite lugging around a battery with an impressive quoted 32 hours’ playtime, the G903 is also surprisingly light. Unburdened of its bottom docking Powercore disc or 10g optional weight, the G903 weighs a meagre 110g. The Corsair weighs 128g, by comparison.

The only lighter option you’ll find is the even more expensive Razer Mamba + Firefly, which uses similar wireless charging tech to let the mouse operate without a battery. It weighs just 96g as a result.

Personally, I found the unhindered 110g weight a little on the floaty side anyway, and ended up using the 10g weighted disc. This clips into a dock on the mouse’s underside. Whether you do the same will largely be down to personal preference.

Those who want to take advantage of the G903’s custom ‘Powerplay’ wireless charging will have to use the lighter Powercore disc, however. The feature works in a similar manner to the Razer Mamba + Firefly, allowing the G903 to charge wirelessly when paired and sitting on top of Logitech’s £90 Powermat.

The combined cost is still well below the £250 of the Razer Mamba + Firefly. But the combo still makes the G903’s wireless charging a fairly expensive luxury that most people won’t need – especially since I found that regular wireless battery life is excellent. Even with RGB lighting on, I easily achieved a fortnight of use from the G903, doing a couple of hours’ gaming each evening. 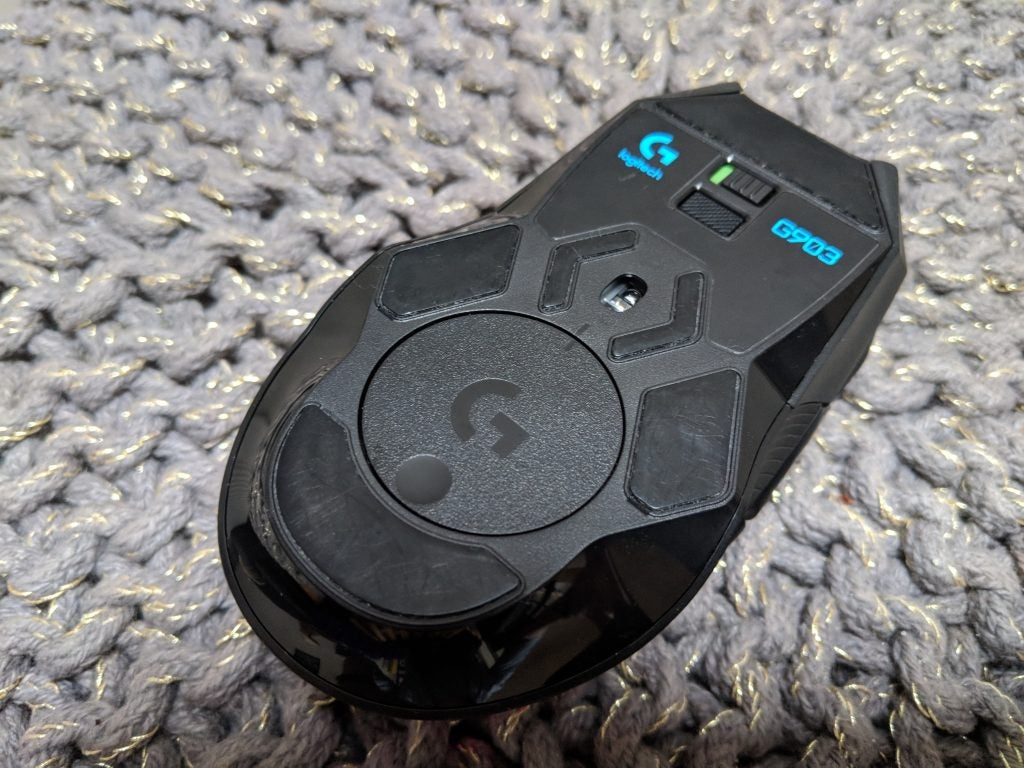 Performance is an area in which wireless mice have traditionally always fallen behind. They’re generally less responsive and more prone to latency than their cabled brethren. Fortunately, this isn’t an issue at all with the G903 for a few reasons.

First is its use of the PMW3366 optical sensor. This isn’t a unique feature, but the sensor is one of the best on the market and means the G903 has a fantastic 200-12,000DPI sensitivity range.

Second, and more importantly, is the G903’s use of Logitech’s stellar Lightspeed wireless connectivity. Lightspeed is a custom tech designed to offer gamers an insane and unnoticeable 1ms response rate. It’s worked a treat on past products such as the stellar Logitech G613 wireless keyboard, and this remains the case here.

On plugging the 2.4GHz Lightspeed dongle into a spare USB 3.0 port, the mouse instantly connected. Since then it’s offered an entirely latency-free gaming experience that matches many of the wired sets I’ve tested for responsiveness – and is completely free of the bugs we experienced when testing the competing Razer Mamba + Firefly.

The G903’s stellar left- and right-button mechanical pivot hinges round off its performance benefits. The switch mechanism is one of the best around and has a wonderfully light actuation point. This makes the mouse feel insanely responsive and fast.

The end result is one of the best mice I’ve tested in performance terms for competitive gaming in quite some time. 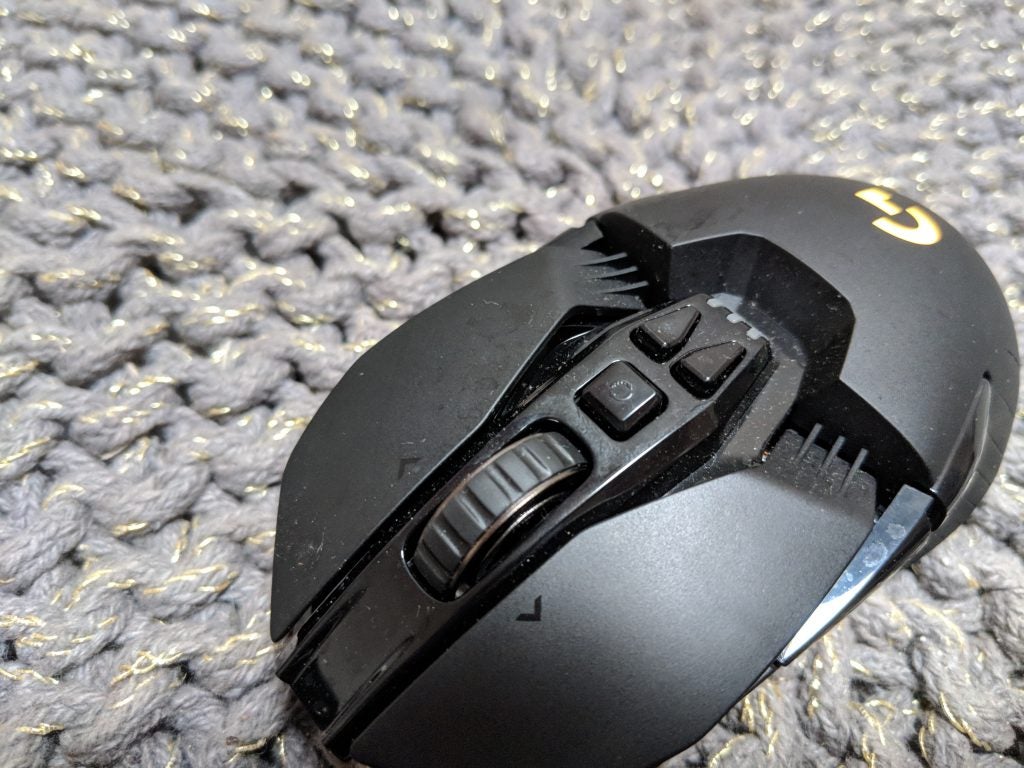 Like pretty much every G-series peripheral, the G903 can be customised using Logitech‘s Gaming Software. Once installed, you can adjust the G903’s RGB lighting, sync it across all your other Logitech peripherals, and alter its DPI sensitivity.

The software is fairly intuitive, featuring a clearly labelled menu system and interactive controls for every part of the mouse. The only things that aren’t on the table are the mouse’s basic left and right keys and central wheel, which all have locked functions.

Outside of this, the only difference between it and some of Logitech’s cheaper offerings is that the G903 has local memory that lets you save up to five different profiles on the mouse. You can toggle through the various presets manually using a button on the bottom of the mouse.

Personally, I’ve never had a need for five presets, and generally limit myself to two: one for office work, one for gaming. But I can see the appeal for more hardcore gamers, who want specific settings for different genres. 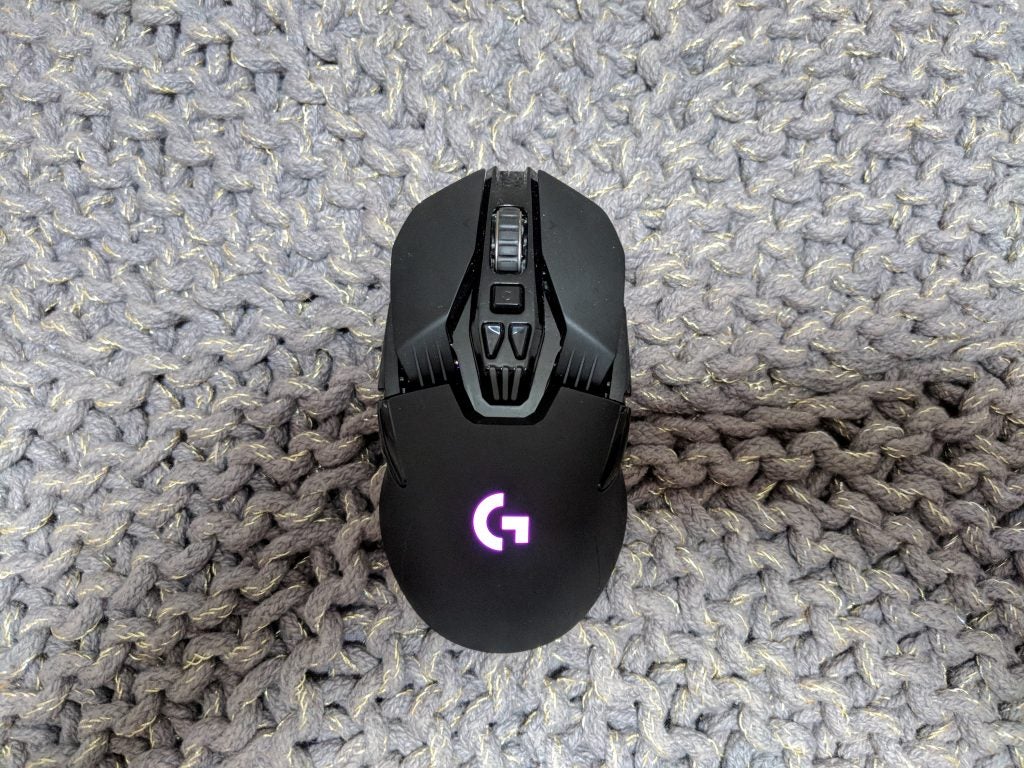 If money is no object, you’ll struggle to find a better mouse than the Logitech G903. Thanks to the addition of Logitech’s Lightspeed technology, it’s one of the most responsive and reliable wireless mice available.

However, it’s a seriously expensive luxury, especially if you want to take advantage of its Powerplay wireless charging support, which requires you to shell out an extra £90 for a compatible mouse mat.