The Logitech G815 Lightsync RGB is a premium wired mechanical gaming keyboard with a price tag to match. But with a low-profile design combined with the excellent GL Switches, you won’t be disappointed with this peripheral purchase.

What is the Logitech G815 Lightsync RGB Keyboard?

The Logitech G815 Lightsync RGB wired mechanical keyboard is a feat of gaming peripheral engineering, bringing flagship keyboard features down to much more manageable size. And thanks to an aluminium-magnesium build, the thin body feels remarkably premium too.

“So it should!” will likely be the cry of most PC gamers once they see the price of the G815, however, but it might just be worth the cash.

The challenge for Logitech is if it can justify the £169.99 price to a wider audience, especially since it ditched Cherry Switches for its own custom GL counterparts. 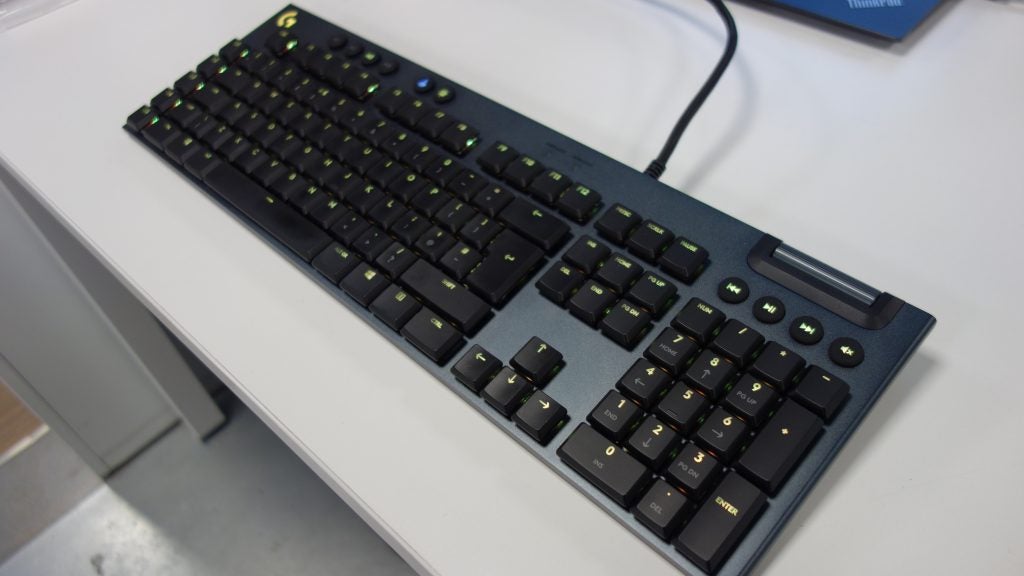 The Logitech G815 Lightsync RGB is one of the best-looking gaming keyboards currently available, evoking similar vibes of pro gaming gear like the Xbox Elite Wireless Controller. The G815 doesn’t look to stand out via attention-grabbing design and sharp edges – instead, Logitech has opted for the sleek and minimalist look, and it’s worked wonders.

The compact size of the Logitech G815 is partly owed to its low-profile keys. Some ardent gamers may not be a fan of this approach, preferring the chunky keys of your typical mechanical keyboard, but the results don’t feel too different from the norm.

The trim nature of the G815 makes it more portable than most gaming keyboards and easier to move around for the occasional trip from point A to point B. But with the keyboard measuring in at 475mm long, don’t expect to be carrying it in a small bag.

The overall build of the Logitech is one of its most appealing features. The aluminium case makes the G815 feel like a truly modern gaming peripheral. The premium feel of the G815 is let down slightly by the plastic bottom of the keyboard, but you’ll rarely be looking at this of course. The casing feels extremely sturdy though, so you shouldn’t be concerned about damage when lugging it around.

The quality of the double-shot moulded keycaps continue the premium theme of this keyboard, but the same can’t be said for the profile preset keys and media controls. These buttons differ from the rest of the keyboard and have a spongy, soft-to-the-touch feel, which lack any sort of tactile feedback, and simply feel out of place on such a high-end piece of kit. 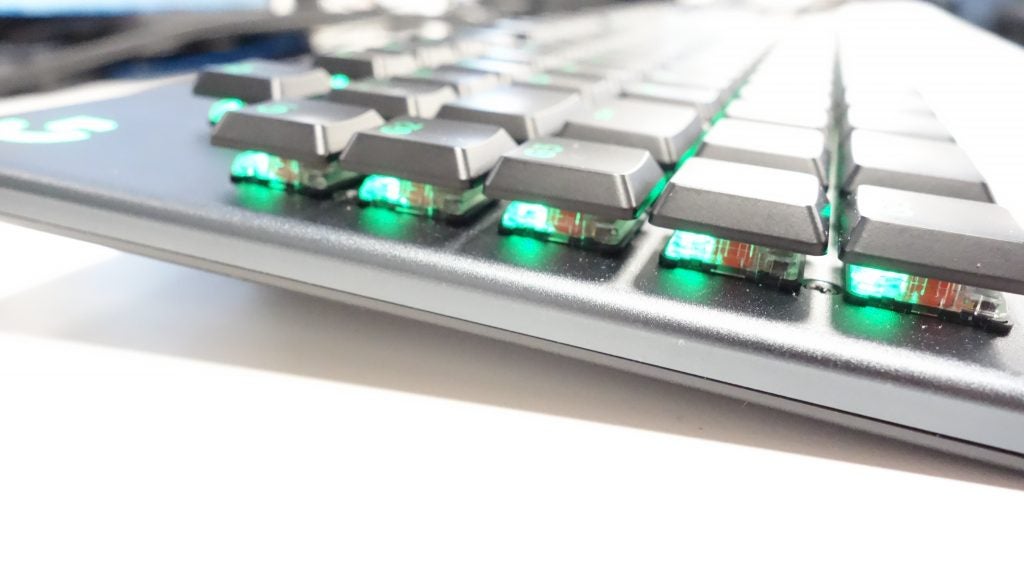 The Logitech G815 Lightsync RGB comes in three different flavours, with each offering a different type of switches. Logitech suggests its GL Tactile are the best bet for competitive and FPS gaming, while the GL Clicky switches aim to give you the most traditional gaming feel.

Our version of the Logitech G815 came with the GL Linear switches, which are basically smoother and quieter versions of its Clicky counterpart.

The switches act and react in line with the GL Linear’s target audience of MMO and action game fans, offering 2.7mm of total travel and requiring an average force of 50gf.

As part of the testing, I played Shadow of the Tomb Raider and it does indeed perform extremely well. The low-profile keys provide a satisfying audible feedback whether you’re issuing directional commands or rapidly tapping away during a quick time event. 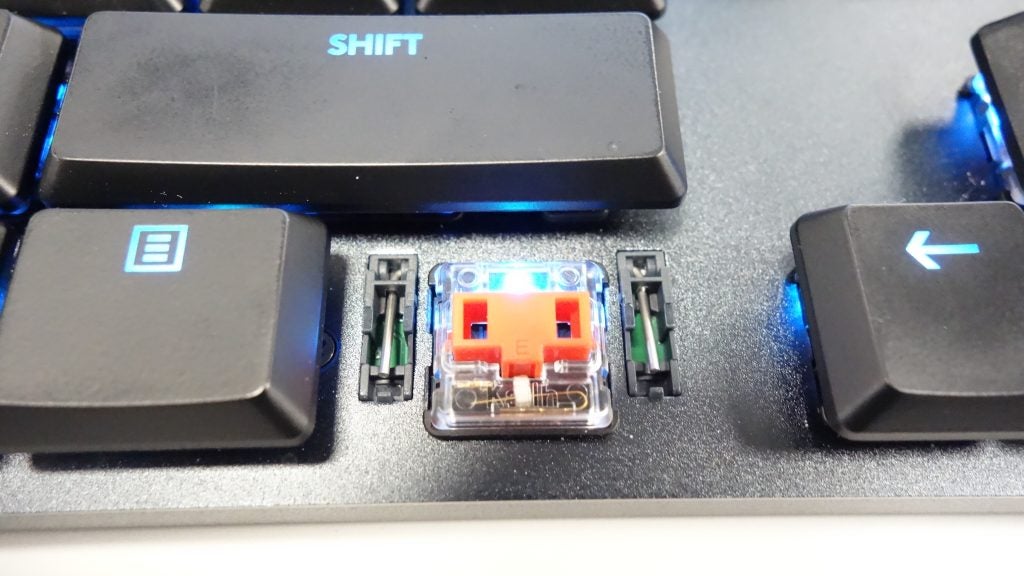 The Logitech G815 Lightsync RGB also offers a set of five gaming macros which are easily accessible down the left side of the keyboard and are GL Linear switches just like the rest of the keyboard. This allows you to customise your own shortcut inputs for any game you wish.

Another handy feature is Game Mode. The G815 comes with a button that deactivate keys not typically used when gaming, preventing you from accidentally hitting any of them when playing. I personally don’t think Game Mode is solving a big issue, but it’s a nice bonus to have. 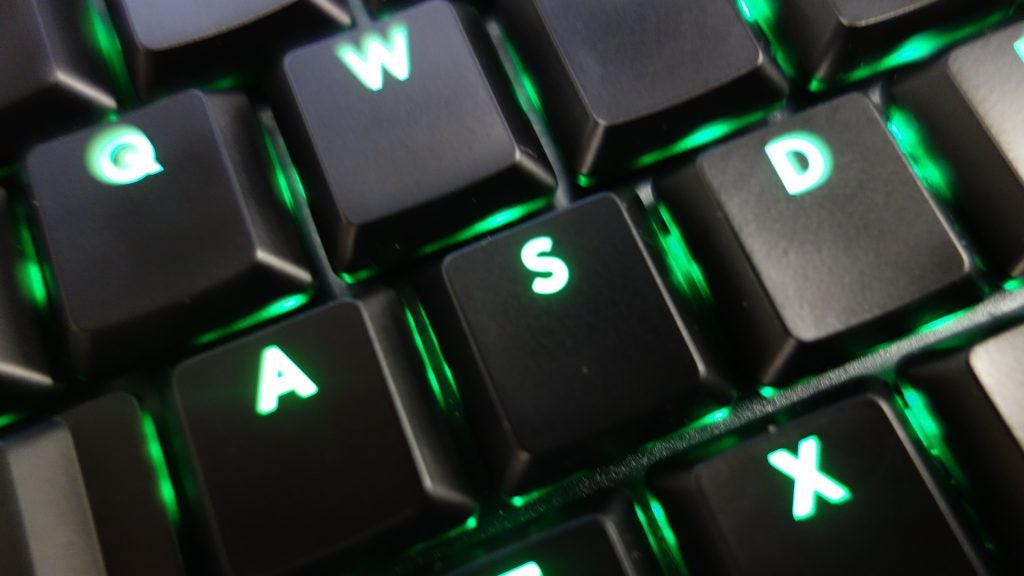 Logitech’s G Hub software is extremely accessible for those who may be new to the delights of macros and custom lighting.

G Hub offers a wide range of options when it comes to lighting. If you’re a fan of extravagantly flashy lights and a full spectrum of colours then you’re covered, but if you’d prefer something a bit more understated and stylish, G Hub’s got you too. 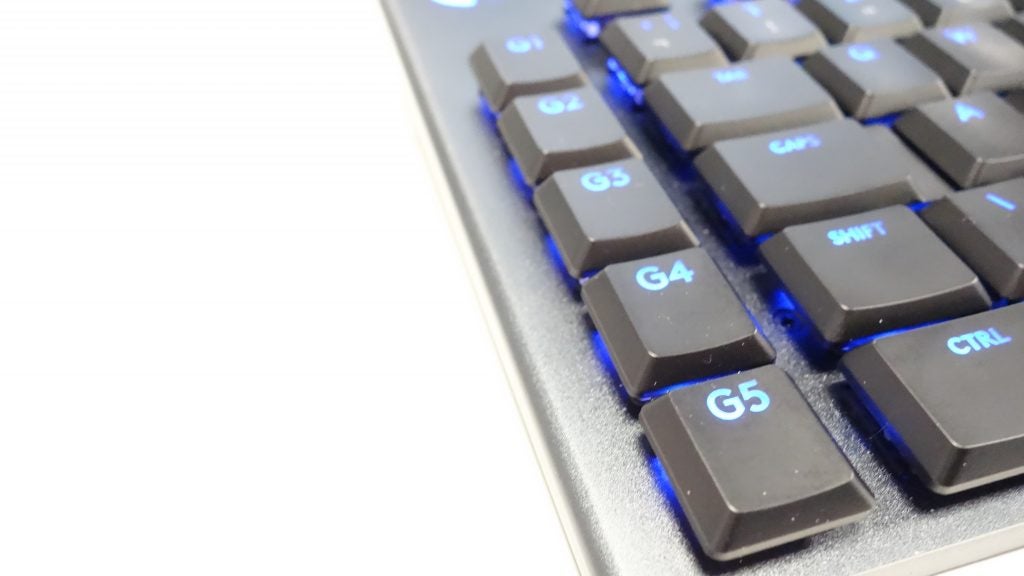 Logitech G Hub falls a bit short of rivals like Razer Synapse when it comes to support with exterior peripherals and nitty gritty customisation. While G Hub is pleasant to use, Synapse feels like software made for professional gamers with the visuals to match.

Logitech G Hub really isn’t that far behind Synapse though, and it does feel like splitting hairs between the two software setups. The difference won’t be an issue for most, unless you want your whole room lighting up in tandem. 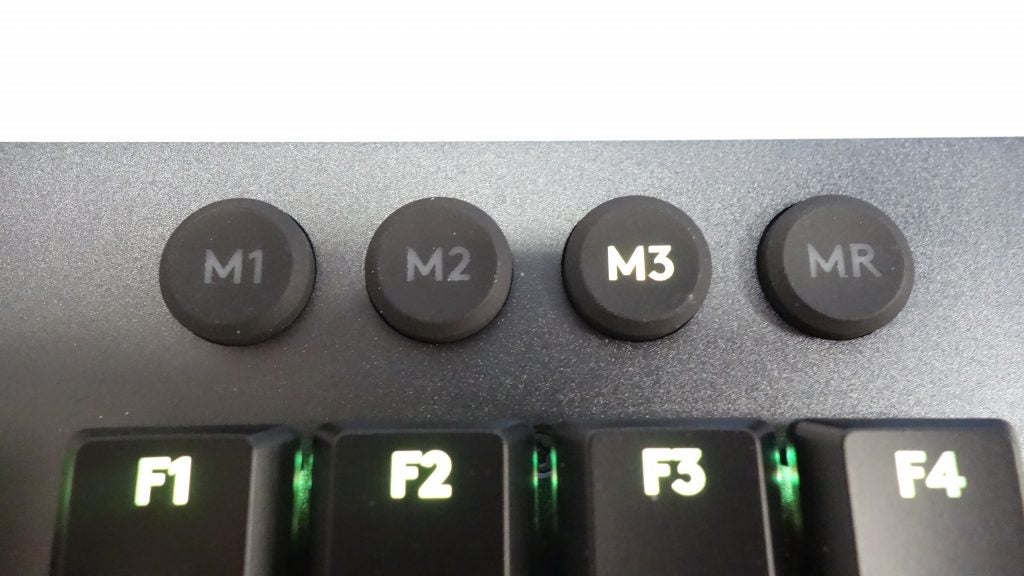 Should I buy the Logitech G815 Lightsync RGB keyboard?

The Logitech G815 keyboard is an impressive-looking peripheral that’s a joy to use, but hard to recommend for most people. The £169.99 price is no small fee and there are definitely higher-performing gaming keyboards that are cheaper.

Our favourite gaming keyboard, the Roccat Vulcan 100 Aimo, comes in at around £20 less than the Logitech G815 and is even competitive when it comes to its stylish looks.

The low-profile design of the G815 is a tempting proposition though, so if you have the money to spare and want a premium keyboard that’s easy to carry over to your mate’s house or switch setups from bedroom to couch, look no further than the Logitech G815 Lightsync RGB keyboard.

It’s also worth noting that if you love the look of this mechanical gaming keyboard but don’t want to be lumbered with a wired connection, Logitech also provide as a wireless alternative in the Logitech G915 Lightspeed Keyboard. You’ll have to pay extra for the luxury though, costing an almighty £209.99.

The Logitech G815 Lightsync RGB is a premium wired gaming keyboard with a price tag to match but, if you really care about looks and you can afford it, you won’t be disappointed.