The G710 is Logitech’s current flagship gaming keyboard, so plays host to a multitude of programmable keys and multimedia controls as well as so called ‘mechanical’ keyswitches for longer life and a better key action. Coming in at around £140 it may seem outrageously expensive just for a keyboard, but then it really does deliver. 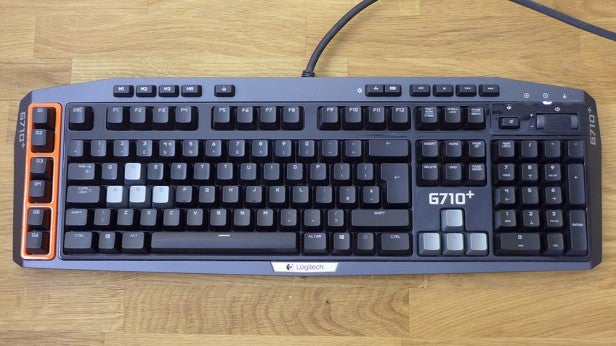 One area where the G710 perhaps lets itself down is its overall design. Its angular shape, multitude of logos and combination of grey and black plastics — with a flash of orange surrounding the ‘G’ keys — is all very ‘gamer’ oriented but not what you could really call stylish. It’s certainly a far cry from the brushed aluminium simplicity and premium feel of Corsair’s K-series keyboards.

Nonetheless it’s a well put together bit of kit, despite it being all plastic. There’s the slightest bit of flex if you press down hard in the centre of the keyboard but in use it’s as solid as a rock. Indeed, Logitech even shows on its website the keyboard functioning after being run over with a tank. 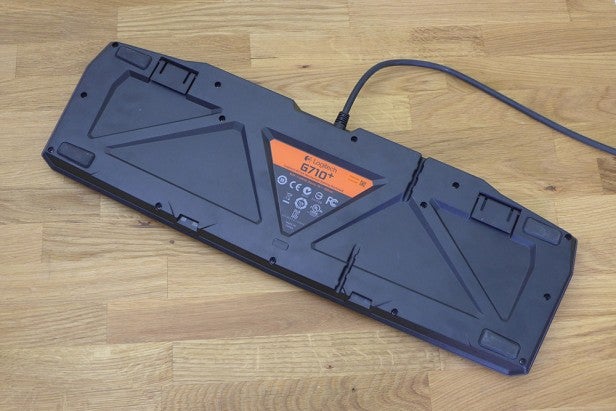 On the bottom are four large rubber pads to stop the keyboard sliding around as well as the obligatory flip up legs for creating a steeper typing angle – there’s only one level of adjustment here, unlike some keyboards that offer two lengths of leg. On the back edge is a spare USB port – the cable is tethered. You’ll need to plug in the second USB plug on the main cable to enable this.

One problem that lots of mechanical switch keyboards have is that to fit in the switches they need to be quite tall so it’s particularly important to have a good typing posture and wrist rest. A plastic snap-on wrist rest is included to provide a slightly more gradual angle but it’s a fairly tame effort and we’d recommend ditching this and opting for a proper padded rest to get a comfortable height for your wrists. 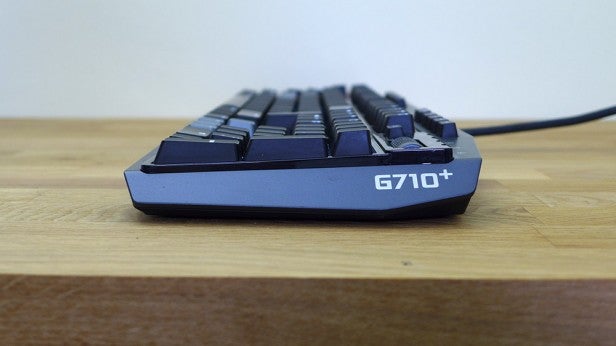 The heart of this keyboard is its use of mechanical key switches. Most modern keyboards use key switches that are manufactured from a single sheet of rubber with little bumps that act as the spring for each key and patches of a conductive material that complete the circuit when the key is pressed.

Mechanical keyboards are any that instead use individual, precision made switches for each key. Typically these refer to the modern types of switches made by Cherry. They’re much more expensive to make but last longer and provide a more consistent typing experience. The Cherry MX switches are also available in different types, with some that audibly click (tactile, clicky), offer a slight detectable bump when they’re activated (tactile, non-clicky), offer a smooth action (linear) or that have different levels of resistance. 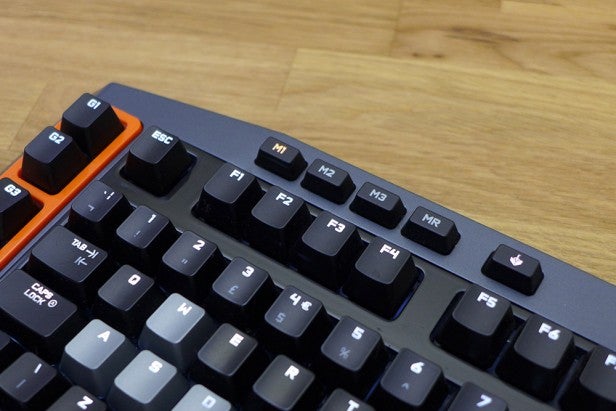 All the standard keyboard keys are equipped with these switches as well as the programmable gaming ‘G’ keys that run down the left edge. The only ones that don’t are the multimedia ones that run along the top edge. The theory here being that they’re used far less often than the rest of the keys so it simply doesn’t warrant the extra cost — we’d agree. 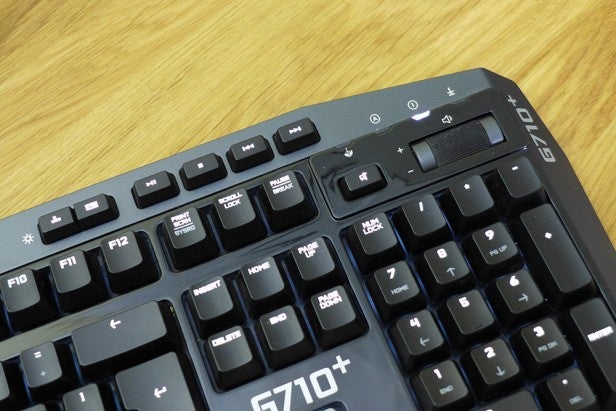 Those multimedia keys consist of, from left to right, four keys for selecting which macro bank to use or to record a macro on the fly. Next to these is the gaming key, which simply deactivates the Windows keys to stop you accidentally jumping out to the Windows desktop mid-game. Then there are two buttons for controlling the two backlight zones – more on which later – followed by standard play/pause, stop, back and forward multimedia controls. Finally, below the Lock status indicators is a mute button and satisfyingly chunky rubberised volume wheel. All told it’s a good selection of extras that are sensibly laid out.

One of the disadvantages of mechanical keyboards is they do tend to be quite noisy as they don’t have the sound dampening efftect of the rubber membranes of normal keyboards. However, to counteract this somewhat Logitech has fitted each key with a rubber O-ring to slightly dampen the strike when the key is pressed. It’s not perfect but it definitely helps.

Logitech has also built up the surrounding sections to protect the sides of the key caps from getting snagged. This is in contrast to, again, the Corsair K-series, which have the key caps stood out proud on their little stalk. 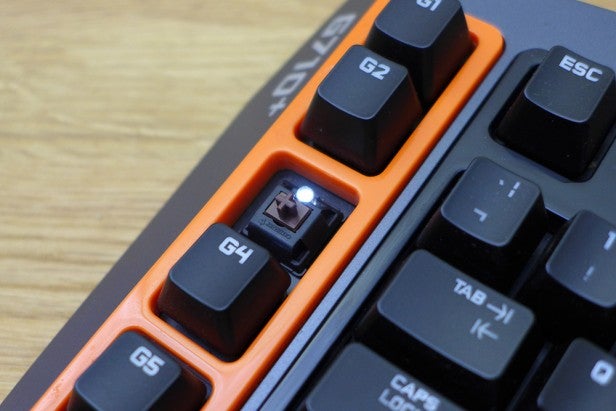 The final key mechanical feature of this keyboard is its backlighting. All the keys are backlit, but there is limited control of the lighting. It’s only available in a single colour (orange and red for the macro keys and white for all the rest) and there are just two ‘zones’ consisting of the WASD and cursor keys and all the rest of the keys. Each zone can be set to four brightness levels, including Off. Frankly, we saw little reason to use anything other than a moderate brightness level across the board — with the lights off the labels are very difficult to read.

The G710 performs, in a word, superbly. The typing experience is excellent, with a fast but light action to its keys that allows for faster typing than we can achieve on any rubber membrane equipped keyboard.

The actual benefit of this responsiveness is less clear for most gaming scenarios, but certainly the extra long life of the keys will be appreciated. 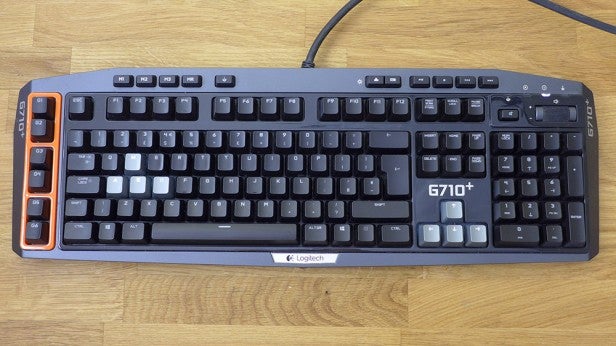 The only concern we had with day-to-day typing was the labelling on the keys. As well as using a slightly odd font, for some reason Logitech has flipped convention and put the main function label of each key at the top and the secondary function below. The backlighting comes through far less clearly on the secondary functions too so all told it can make it a little to find the key you’re looking for.

Despite the noise dampening, this is still a noisier keyboard than your average rubber membrane affair but it’s definitely a welcome improvement. For those that really can’t stand noisy keyboards, though, this probably hasn’t gone far enough.

Of course no gaming keyboard would be complete without a full set of programmable keys and comprehensive software for programming them and sure enough Logitech provides an easy to use driver. Incidentally, this is required to use the macro keys and currently there isn’t a version for Linux so these functions won’t be available to those users.

The software will automatically detect several games you have installed and set appropriate controls for that game to the G keys, though you can of course customise these.

If you aren’t too fussed by its clichéd ‘gamer’ styling then yes, absolutely add the Logitech G710 to your short list. It’s well built and provides a superb day-to-day typing and gaming experience. It’s also packed with features.

Those that are more concerned with having a classier looking keyboard should consider the Corsair K95, which features a slick brushed aluminium frame and much subtler all-black colour scheme. It also is cheaper and has more G keys, though lacks the volume wheel and key noise dampening.

If you’re looking for even fancier lighting new models with individual multi-colour keys will be arriving soon, though they’ll be even pricier of course.

Logitech has slipped up a little with the styling of the G710 , and for many it will simply be too pricey but otherwise it’s a superb premium gaming keyboard.

Next, read our Best Games of 2014 Roundup