It seems as if it was only yesterday that Logitech launched its first laser mouse, the MX1000. It has had some rave reviews, not only from TrustedReviews but from many publications world wide. Now Logitech has taken things to the next level with the introduction of the G7 – think MX1000 meets the MX518. 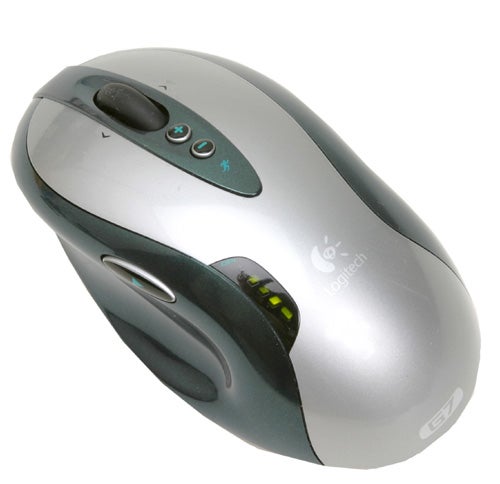 The G7 design is very similar to that of the MX518, but oddly enough some features have been removed. But let’s start at the beginning – the new laser sensor. The G7 has a 2000dpi sensor, that’s 400dpi more than the MX518. However, it’s not practical to use this kind of resolution for Windows work, as the mouse goes all over the place.


Luckily the SetPoint software allows you to adjust the sensitivity of the mouse to make it comfortable to use in any environment. You can store five different settings, while even setting different speeds in the X and Y axis. You can switch between the sensitivity settings by pressing the + and – buttons on the mouse, just below the scroll wheel. You can of course switch the sensitivity on the fly, by pressing either button, while a set of three LEDs keeps you informed as to which of the five settings you’re currently using – a combination of two lights are used for settings two and four. 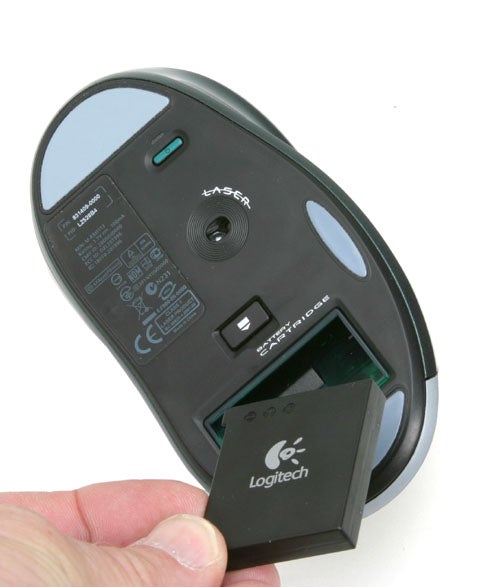 The resolution can be set in even steps of 50dpi between 400 and 2000dpi. As soon as you move the mouse the current setting will be displayed by the orange LEDs. Let go of the mouse for a few seconds and the battery indicator will pop up and show you a set of green LEDs that indicate the charge level of the battery.

I’m sure some of you – at least if you own the MX1000 – know that it can be annoying when you’ve forgotten to charge the mouse – you come to use it and the red little light flashes up telling you that you’re out of luck. Logitech has solved this problem by supplying the G7 with two removable Li-Ion battery packs. These are flat squares that slot into the bottom of the mouse. To remove the battery you press the eject button and it just pops right out. 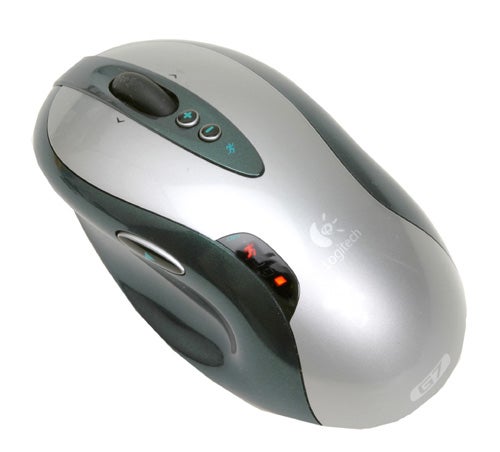 The charger plugs into your USB port, much like a normal cordless mouse receiver and has a slot for one battery. Again, this has an eject button that releases the battery. The top of the charging station has a USB port to which you can fit the receiver. This might seem like an odd solution, but for those that attend LAN parties regularly it might prove to be a handy feature – allowing you to only bring the small USB key with you instead of a large lump of plastic.


The bottom of the charger has a switch for fast or slow charging, although I’m not sure why anyone would use the slow settings. According to Logitech it takes about two hours to fully charge one battery in the boost mode. The bottom of the mouse also features an on/off button, so you’re not wasting battery power when the mouse is not in use. 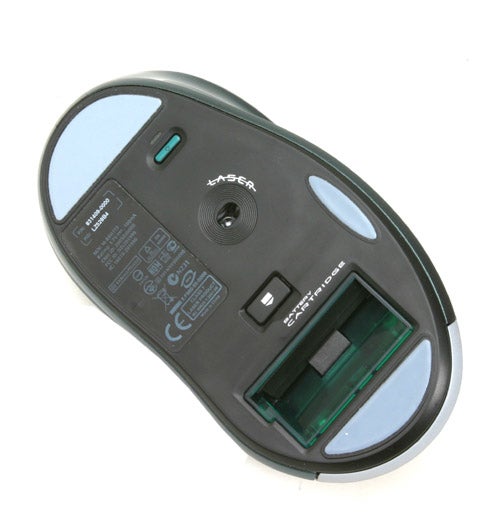 As I mentioned, the G7 has lost some features of the MX518, most noticeable is that one of the side buttons is missing. This means that in Windows you only have a back button in your web browser. This has been done – according to Logitech – because hardcore gamers don’t like to have too many buttons on their mice, but to me this sounds a bit daft; you can’t have too many programmable buttons in my book. Also gone is the application switching button – not as big as a loss – as it had to make way for the dpi adjustment buttons, as both are now below the scroll wheel.

The scroll wheel is of the tilt type and those with an MX1000 will be glad to know that it is nowhere as stiff to press down as the old model was. Another great feature is the addition of large glide pads on the bottom of the mouse rather than the tiny pads used in the past. These are made from polytetrafluoroethylene and with the right surface provide for excellent glide.


But even on a desk the G7 glides much better than the MX1000. I’m not so keen on the choice of colour, as silver and metallic green doesn’t do it for me. However this is a matter of taste and it could’ve been far worse – think bright orange and yellow. Logitech has also done away with the horrible stuck on logos that tended to either scratch your hand or peel off. 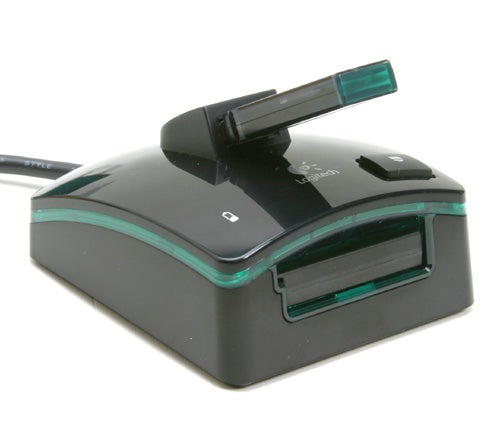 The ergonomics of the G7 are pretty good and it is comfortable to hold for long periods. However, it’s not quite as comfortable as the MX1000 and it doesn’t have any rubberised sections – something I quite liked with the MX1000.


It’s a dream to play games with the G7 as it is very accurate and I’ve found the sensitivity switching handy even in the same game. I’m not a hardcore gamer by any means, but I play my fair share of games and for anyone serious about their computer entertainment the G7 is a solid choice. I know there are people out there that would never even consider buying a cordless mouse for gaming (Riyad and Benny to name but two), but the G7 is the definitive cordless gaming mouse.


The Logitech G7 is the cordless gaming mouse to own, it’s not cheap, but it is worth every penny. Even if you don’t think that cordless mice are up to hardcore gaming, give the G7 a try – you might be surprised.