The G613 is a pretty weird beast. It’s a mechanical, wireless keyboard that Logitech’s pitching to gamers – a demographic notorious for clinging to latency-free wired connections.

Although it sounds a little odd, there’s plenty to like about the G613. Highlights include Logitech’s Romer-G key switches, superb Lightspeed wireless technology and rugged build quality. This combination of factors makes the G613 an excellent wireless keyboard for typing and gaming alike.

However, a few niggling flaws – such as the lack of backlighting and the absence of a USB passthrough – mean that the competing Corsair K63 Wireless with its faster Red Cherry MX switches remains a better choice for those for whom cable-free gaming is a priority.

As wireless keyboards go, the G613 is a pretty hefty bit of kit. Measuring 216mm wide and weighing 1.46kg (with batteries), the keyboard is significantly heavier and larger than the competing Corsair K63, which has a more compact tenkeyless design and weighs in at 1.09kg.

Logitech has used the extra real estate to load the keyboard with discrete media controls on the top left of the board, and six macro keys on its left. My only minor quibble with the keys is the separate buttons for volume up and down, which makes quickly adjusting levels during heated games sessions a touch fiddly. I’d also have preferred a roller control – although, again, this is a minor annoyance.

The lack of any form of LED backlighting or a USB passthrough are slightly harder to overlook. I’ve never been a fan of RGB lighting, but there are plenty of gamers who love it, both for celebrating particularly cool kills and mapping games’ control schemes. This will also be an issue for gamers who prefer to play in the dark. 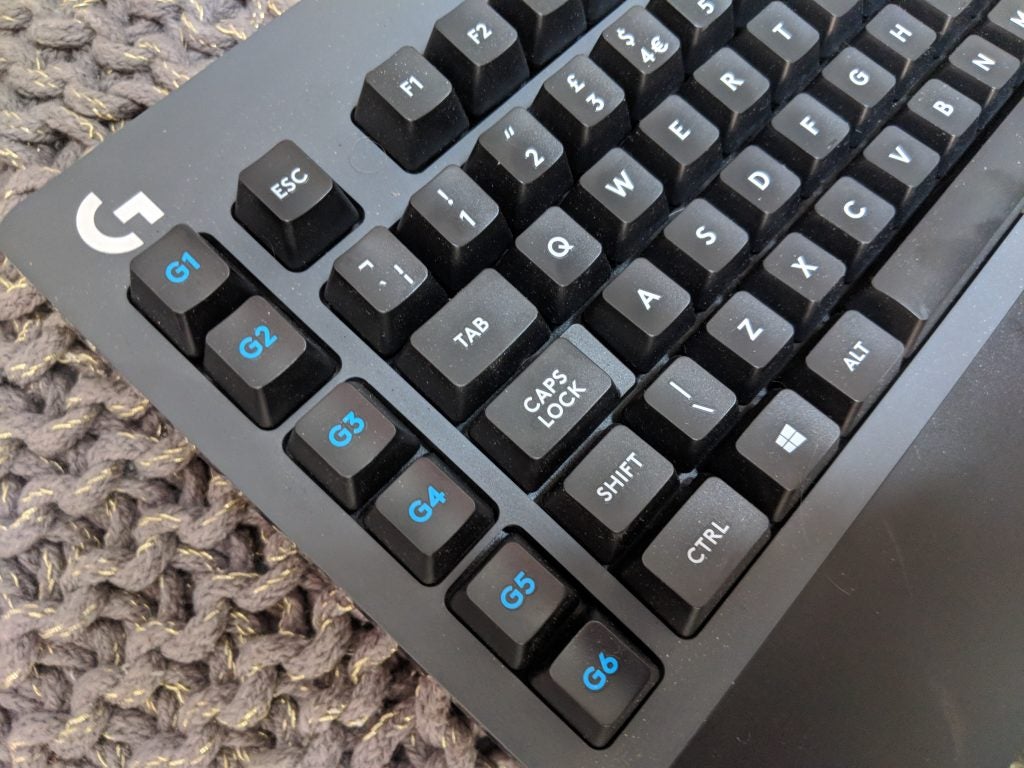 I understand that Logitech chose to omit both because of the impact on the G613’s battery life, but coming from the stellar Corsair K95 RGB Platinum wired keyboard, I certainly felt their absence during prolonged gaming sessions. The lack of a USB passthrough means you’ll have to use nothing but wireless peripherals when sitting away from your computer.

Fortunately, these issues are forgivable since this keyboard delivers in pretty much every other area. The plastic chassis and sizeable palm rest feel well made and don’t suffer any flex, even when met with heavy typing. Setup is also a doddle thanks to Bluetooth and Logitech’s ‘Lightspeed’ wireless support.

The inclusion of Bluetooth makes it easy to connect the keyboard to most laptops and tablets, but if you want a tip-top, latency-free gaming experience then you’ll want to take advantage of Lightspeed connectivity. Sadly, this involves sacrificing a USB 3.0 port on your PC for the included Lightspeed dongle, but in my mind it’s definitely worth it. 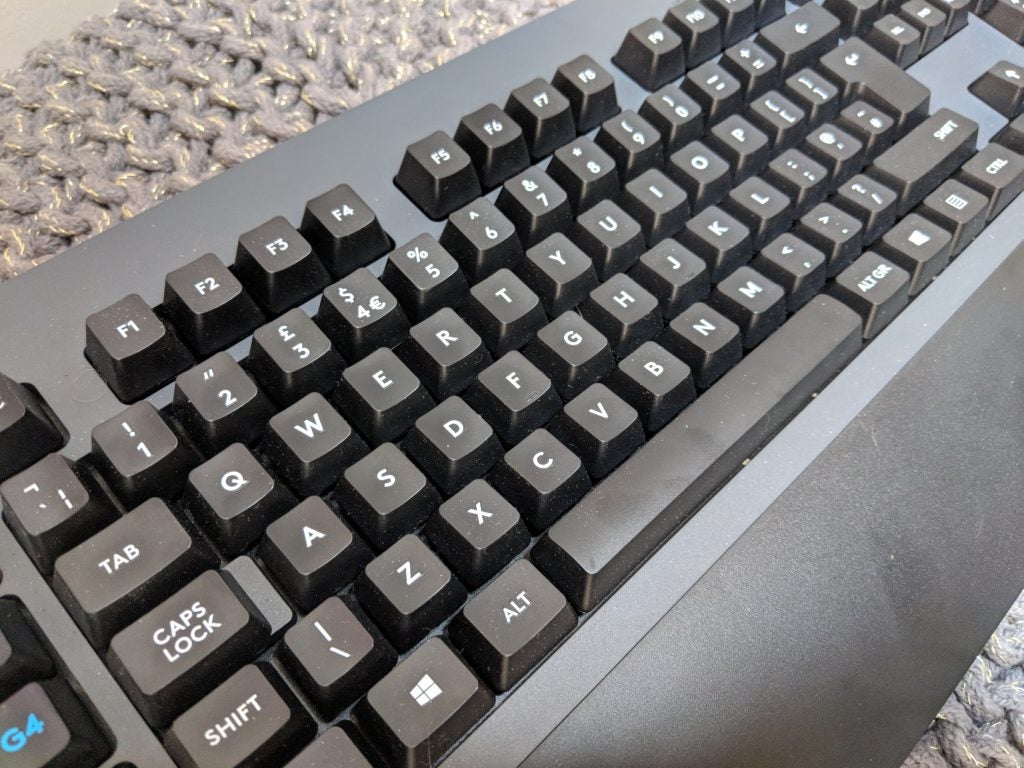 Lightspeed is a proprietary wireless technology that Logitech claims will offer games an insane and unnoticeable 1ms response rate.

With real-world use I found the tech works a treat, and I’m yet to experience any connectivity or latency issues gaming on the G613. Sitting on my sofa a good 5 metres from my PC, the connection was lightning-fast and the keyboard registered every command instantaneously.

The unit’s Romer-G key switches also work a treat. Romer-G key switches are custom tech developed by Logitech and Omron. They’re designed to have a shorter travel distance than regular keyboards, plus a 1.5mm actuation point and an actuation force of 45g. The end result is a keyboard that feels a little like it has Brown Cherry MX switches. The main difference I’ve noticed is that keys have a springier action and are noticeably quieter than their Red Cherry MX rivals.

Overall, the G613 is a nicely diverse keyboard that works equally well for gaming and regular typing. The only downside is that people used to a quicker pace – or Red Cherry MX switches, like those on the Corsair K63 Wireless – will find it a little slow and less reactive for speed-focused gaming. Although, which you like will boil down to personal preference.

The only serious performance negative stems from the lack of any on-board profiling options for the macro keys. You can programme multiple profiles using Logitech’s desktop gaming software, but there’s no way to manually switch to them directly on the keyboard. It’s a small annoyance, but one that will aggravate folk who regularly switch profiles when playing different characters in MOBAs, for example. 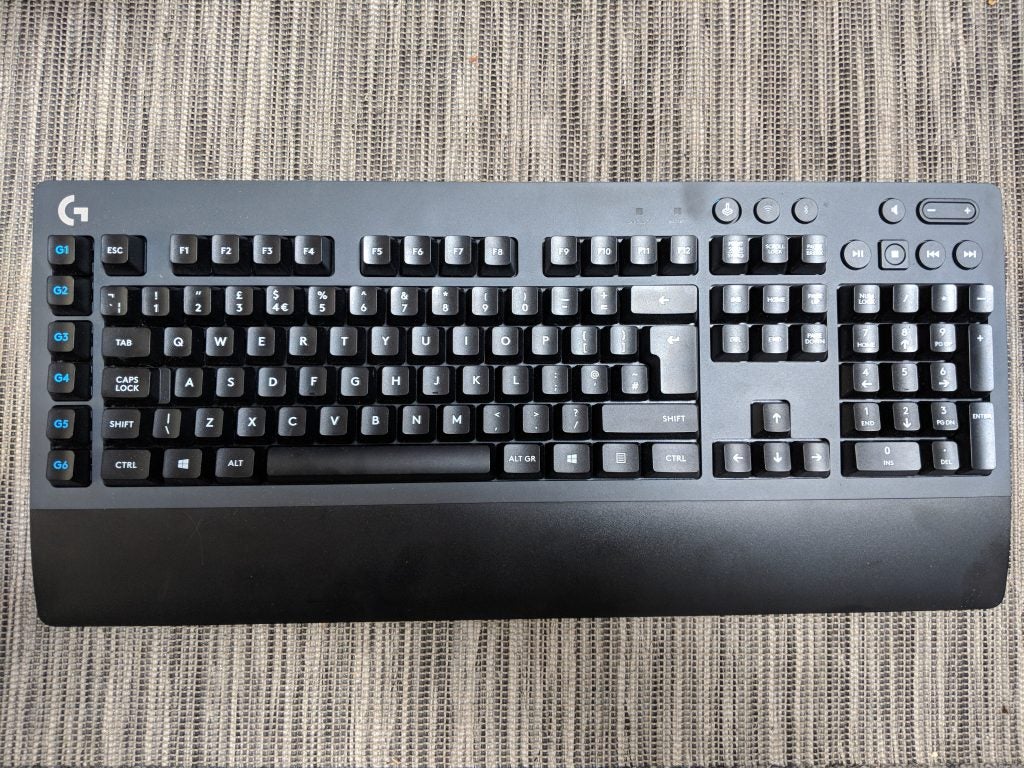 If you’re on the market for a mechanical wireless keyboard, then right now it comes down to a choice between the Corsair K63 Wireless and the Logitech G613.

Of the two, the Logitech G613 is the slightly better option for those who want a keyboard for more than just gaming. Its custom switches offer a superior basic typing experience, and its full number pad is a blessing for office work.

However, hardcore lounge gamers will likely prefer the Corsair K63 Wireless. The tenkeyless design is more compact and lap-friendly. The addition of backlighting and faster Red Cherry MX switches also makes it feel a little more reactive when gaming.

The Logitech G613 is an excellent wireless gaming keyboard, and offers a decent typing experience too.